The California inferno has ignited the long-smoldering debate over whether we have brought Mother Nature's revenge upon ourselves. 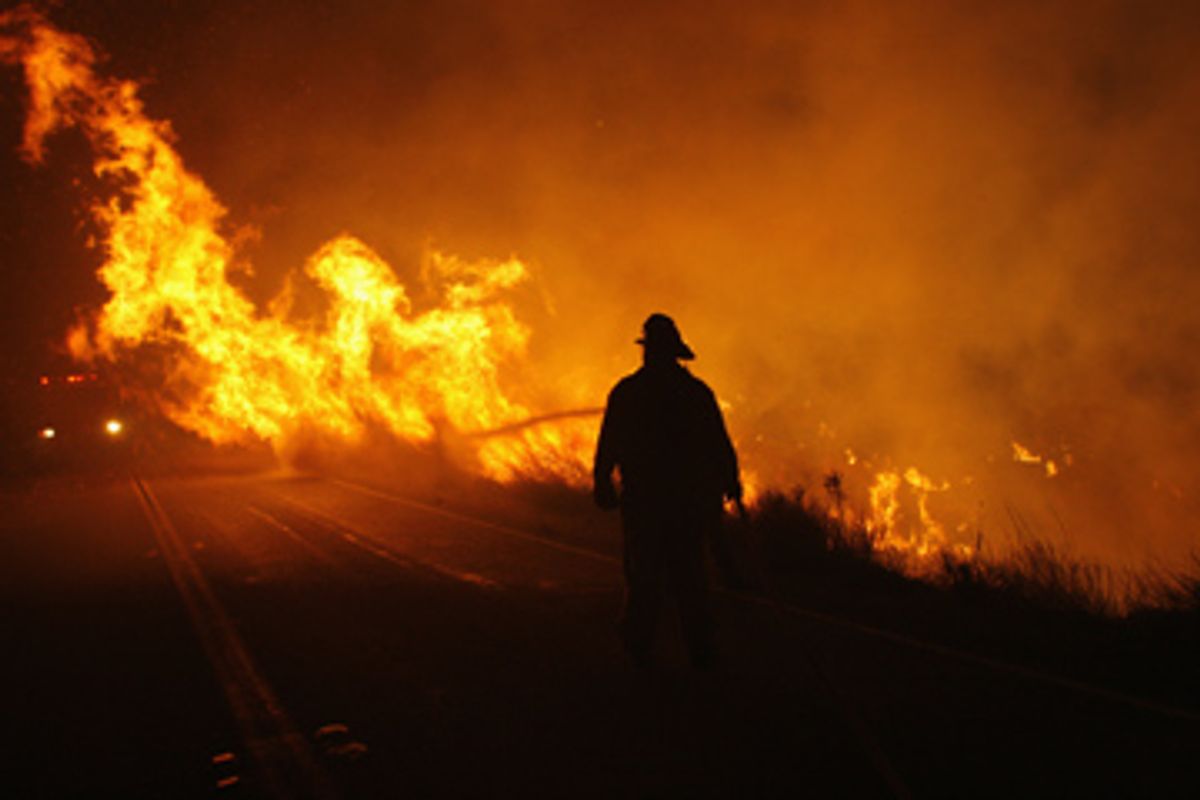 The fires in Southern California this week raged through 500,000 acres, inspiring the largest-scale human evacuation in the state's history. Some half-million residents were displaced from their homes over six days, and more than 1,800 homes went up in flames. Eighty people were injured, and the death toll stands at seven. All told, more than a billion dollars of property damage has been reported, leading President Bush to declare seven counties a major disaster.

In the wake of the destruction, another fire is raging -- the debate over fire suppression, and what part it should play in national policy. Has 100 years of attempting to stop most wildfires backfired and caused more destructive infernos? Or is putting out as many fires as possible the only defense against massive devastation and loss of human life in combustible habitats home to millions of people? The Southern California inferno has given ammunition to impassioned scientists on both sides.

"We started fire suppression in 1900 and we started getting bigger fires by the 1920s -- and they've gotten ever bigger since," says Richard Minnich, a fire ecologist at the University of California, Riverside, speaking by phone from his office, where skies are gray from the wafting smoke of the still-burning fires. He argues that putting out small fires in wilderness areas, rather than letting them burn slowly, has created excess fuel for fires to ignite in dangerous weather conditions, such as the West's dry Santa Ana winds. "We're trying to conquer nature, and nature always wins out," he says. "Fire is the primary way that we decompose organic material in California. Growth and decomposition must be equal over time. We're trying to get rid of one-half of the equation."

The policy of protecting the wild from fires took shape in the Teddy Roosevelt years, when lands were being designated for national parks, forests and preserves. The wilderness must be saved for future generations, the thinking went, even if fires were started by natural causes like lightning. As decades passed, ecologists grew more aware of the natural role of fire in ecosystems, of how it thinned vegetation and germinated new flora. Of course, at the same time, more people moved into or near flammable habitats like the chaparral communities and Western pine forests in Southern California. Today, as the Los Angeles Times reported, nearly 5 million California homes are at high to extreme risk from wildfires, and 84 percent of them are in urban areas abutting wild lands.

In California, the National Park Service allows some wildfires to burn in the high Sierra in California and the Forest Service monitors some wildfires, like the recent Zaca Wildland Fire, which was contained in early September after burning more than 200,000 acres over two months. Yet, in general, there's an aggressive put-it-out policy that extinguishes most fires, because of potential danger to people and property. "There is zero tolerance for fire in Southern California, and that's never going to change," says Richard Halsey, a biologist who is also trained as a firefighter, who stayed home to successfully defend his house in Escondido last week. "It could kill somebody. The reason that they put fires out is that they kill people."

The suspected ignitions of the many fires this week were human -- downed power lines and arson -- not natural. But the fires took off because weather conditions were ripe for a major conflagration. "The Santa Anas themselves are one of the worst fire weather types in the whole world," says Max Moritz, a specialist in wild-land fire, and adjunct assistant professor at the University of California, Berkeley. The winds typically form when there's a high pressure system over the Great Basin, and a low pressure system over the Pacific. The winds gain heat as they cascade down mountain slopes to sea level. "By the time they hit Southern California, you have some really strong, warm, dry winds, which from a fire point of view is extremely dangerous," says Moritz.

In the midst of a longtime drought, Southern California had an unusually dry spring this year. By the fall, moisture in plants and trees has been greatly diminished, making them more flammable. Many of the areas that burned in Southern California this week were chaparral, a habitat that's especially combustible. "Much of what's happening is unfortunately inevitable, given these houses are built among chaparral plant communities," says Malcolm North, a research forest ecologist with the USDA Forest Service, Pacific Southwest Research Station.

Fire is nature's way in the chaparral, where plants, mostly shrubs, are adapted to warm, dry conditions. Some of them have seeds that do not germinate unless they've been heated through fire. Others are root sprouters, which means that when the entire aboveground part of the plant is burned off, it will simply sprout again from the roots below. "It's a system made to burn," says North. "When you build in chaparral communities, it's not a question of keeping the fires out, it's just a question of when it will burn, because fire is inevitable."

Yet some scientists argue that the catastrophic blazes we saw this week are not inevitable. Minnich says that if small fires had been allowed to burn over the years, and not been suppressed, the area would not have suffered such devastation. A series of small fires would have maintained a natural balance and prevented one big blaze from getting out of hand.

"The actual course of a fire is influenced by previous fire history," Minnich explains. Imagine a landscape where some patches have burned many decades ago, some 10 years ago, some three years ago, and some last year. When an older stand of chaparral catches fire and burns fiercely, given all that fuel, the fire would run into younger plants in areas that have more recently burned, slowing the fire down, and eventually allowing it to peter out. With frequent burning, a chaparral community would be like a mosaic or quilt, with different patches of varying ages, providing a kind of natural curb to prevent fires from burning out of control.

"Because we've had fire suppression all these years, all we have left is huge areas of equally old chaparral," says Michael Barbour, a plant ecologist at the University of California, Davis, who advocates prescribed burns. "That's why these fires are so big. There is no patch of recently burned chaparral to stop it."

Attempts to stop fires then paradoxically encourages massive blazes. "We're very good at putting out fires in good weather, but not in the worst weather," says Minnich. "By suppressing little fires, we select for the big fires to occur in the worst weather. That, by far, is the cardinal sin of management. We generate high-intensity, large fires from which we can protect less property and resources."

Jon Keeley, a research ecologist for the U.S. Geological Survey, an adjunct professor at UCLA, flatly disputes this analysis. "Over the last 100 years, there hasn't been a change in the amount of fires in the shrubland in California," he says. "On average, every decade through the 20th century has had about the same amount of area burn, despite fire-suppression policy. The big fires that we're seeing are not an anomaly due to bad management of the fuels." Keeley cites evidence of a large 1889 fire that ripped through Southern California, in the days before fire suppression. Minnich isn't sold. The 19th century fire, he contends, wasn't as big as the sensationalistic newspaper accounts made it out to be.

Halsey, a biologist who runs the California Chaparral Institute, an association concerned with the semi-arid shrub-dominated habitat common in Southern California, sides with Keeley. He argues that allowing small fires to burn often leads to invasive non-native grasses moving in, which are flammable and can burn every year. He goes on to say that those opposed to fire suppression are heading in the wrong direction, toward habitat destruction."Their solution is grind up the landscape and do controlled burns, and all that's going to end up doing is converting native habitats to weed lots, which ultimately provides enough vegetation for a fire anyway." While Minnich argues that chaparral, its natural state, would experience frequent small fires, Halsey contends that without humans bringing their ignition sources, like power lines, into the mix, the chaparral would see fewer fires. "I don't remember when the last lightning strike was in the lower elevation in San Diego County," he says.

Minnich counters that ecologists need only look south to Baja to see what chaparral would look like if it frequently burned. He argues the area experiences many fires, but they burn smaller than those across the border in the United States. Halsey says the frequent Baja fires aren't natural at all, but are set by ranchers to convert the chaparral into herbaceous habitat that their livestock can graze. By contrast, he says, "the four California national forests -- San Bernardino, Los Padres, Cleveland and Angeles -- were designated to prevent the ranchers from doing that anymore, and to protect the chaparral."

Most scientists agree that fire suppression played a role in the blazes that consumed pine forests in Running Springs and Lake Arrowhead this week. In the past, Barbour argues, forests were much less dense because natural fires consumed the shrubs, needles, saplings and seedlings. The bigger trees survived because their upper branches and crowns remained untroubled by the blaze below. Now, such forests are so thick with trees and foliage lower down that even big trees go up in flames in the blazes. "Now you have more fuel and trees of all sizes and there's what they call a fire ladder, which takes the flames naturally from the ground all the way up into the crowns," says Barbour. And a denser forest also means a drier forest that's more combustible. "There's a lot of trees fighting for a very limited amount of moisture, and they duke it out," says North. Beetles, adapted to sense trees under stress, move in and colonize trees, killing them, adding more potential fuel.

Moritz of U.C. Berkeley stakes a middle ground between the scientists on the burning ends of the debate. He says that in the face of such an extreme weather event, like the strong Santa Anas and the drought seen this year, the density of the foliage and the age of the chaparral is less of a factor than it would be in other fires. "Fire suppression has had some impact, but under these weather conditions, it probably hasn't changed the probability of these events quite as much," he says. Moritz notes that young, medium- and old-age trees alike have burned in fires fanned by extreme weather. What worries Moritz is that some of the same areas that ignited this week burned as recently as 2003. That suggests that extreme fires have wiped out important native species. "Invasive annual grasses and weeds now come in and take their place, and they can burn every year," he says.

Are extreme weather conditions becoming more frequent? That's the question Southern Californians must face in decades to come. Global warming, which will increase hot, dry conditions, scientists say, will likely make fire seasons longer in the coming years. And with California's population projected to grow to 60 million by 2050, nearly 22 million more than today, there are likely to be more people living in the urban-wilderness interface. "Fire is going to be less and less likely to play its natural role," says Mortiz, "and more and more homes are going to be at risk of burning."