Who needs a Prius anyway? 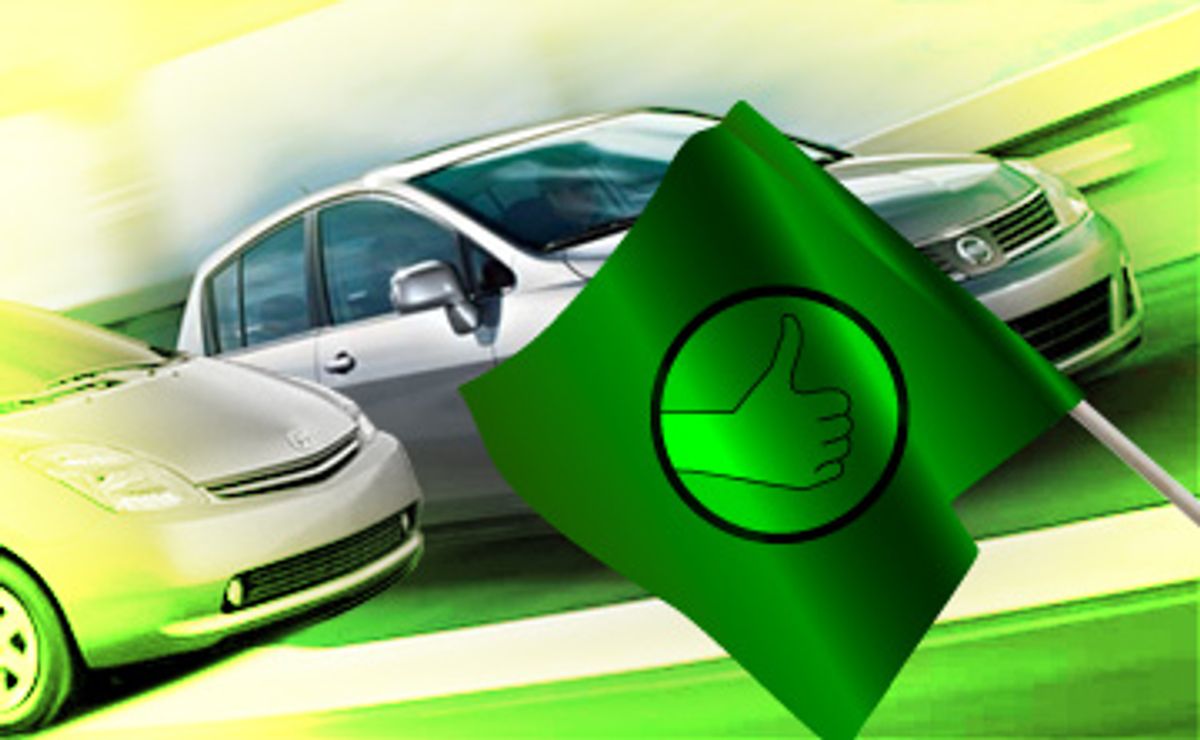 More than a cloth grocery bag or a Nalgene bottle, today's accessory for any hotblooded environmentalist is a hybrid car. For anyone who can afford the $22,000 price tag, a Toyota Prius and other hybrids announce to the world that you are someone who cares about melting glaciers and the fate of polar bears. People have always bought cars as a status symbol. Where would the sports car be without the midlife crisis?

So if you want to pay more than $20,000 to reduce your carbon footprint, brag about your part in reducing dependence on foreign oil, and garner esteem from friends at the natural-foods store, go right ahead. Just don't be too smug. If hybrids are driving a revolution, it's a televised road trip to marketing heaven.

Hybrids aren't necessarily the most environmentally friendly car on the market, says Jim Kliesch of Greenercars.org. The Web site, sponsored by the American Council for an Energy-Efficient Economy, rates cars based on tailpipe emissions, gas usage and factory emissions associated with manufacturing. While the Prius and Honda's former hybrid, the Insight, get reported averages of 40 miles per gallon, they're far from the 60 mpg promised on the sticker for city driving. The disconnect is due to an outdated Environmental Protection Agency calculation for fuel economy estimates that fails to include air conditioning, cold-weather driving and high freeway speeds. In October, the EPA implemented its new calculation method for 2008 models. It now claims the Prius gets 45 mpg on the highway.

Part of the hybrids' green allure is that when they idle in traffic or at a stoplight, the battery kicks in and shuts down the polluting gas engine. Even so, several cars on the market, such as the Honda Accord and Volkswagen's Beetle and Rabbit, emit less than hybrids. In fact, Honda's nonhybrid Civic GX (it's natural-gas powered) tops Greencars.org's "Greenest Vehicles of 2007."

Some hybrids don't deserve any kind of green bragging rights. The Lexus RX SUV is designed not for fuel efficiency but for speed and power, and gets an average 30 mpg. That's not bad for an SUV but a host of nonhybrid cars get better gas mileage. So why do hybrid owners deserve tax credits and access to high-occupancy lanes? Such tax credits are window dressing that allows politicians to appear as if they're doing something to help the environment, says Jamie Kitman, the New York bureau chief for Automobile magazine. Congress hasn't increased the federal mileage standard in new trucks and cars since 1985. While the Senate has proposed requiring new automobiles to deliver 35 mpg by 2020, the effort is being derailed not only by Detroit's Big Three but by Prius-maker Toyota, the company that claims to be "moving America forward."

In reality, the cheapest and simplest way to cut carbon emissions is with small, lightweight cars that get good gas mileage. This is good news for me. I'm a journalist. This means I can look forward to a life of small paychecks, and for now hybrids are too expensive for me. So I set out to find a hybrid alternative that can still get me to the mountains, soccer games and, yes, the natural-foods store.

Daniel Jerzag, a Polish immigrant with a polyester shirt and a sprayed-on salesman smile, was my appointed ambassador to the Honda fleet of nonhybrid cars. A patient man, he took it in stride when I hopped in the back of the Honda Fit, a model that's about a foot shorter than my Subaru, to see if I would be able to sleep in back if I were camping and a torrential downpour caused my tent to feel as watertight as a colander and I needed to sleep in my car. This has happened. It could happen again.

I folded down the back seats and if I lay horizontally, I could just fit (get it?). This probably won't be a viable option for most people: I am only 5 feet tall. However, when I loaded my bike, a cruiser from the 1950s with a basket and fenders, into the back, it fit no problem. "This, ugliest car we've got," said Daniel with his charming broken English.

With a sales pitch like that, clearly he doesn't have to work too hard. Honda Fits are sprinting off the lot. Dealerships report they're mostly sold before they arrive. All sorts of people -- 20-somethings, families, a lot of women in their mid-50s -- buy these cars, said Daniel. While the Honda hybrid gets around 40 mpg, the Fit, for $6,000 less, gets 37 mpg.

Like the Fit and the Civic, the Nissan Versa gets a high score from Greenercars. A joint venture between Nissan and Renault, this $12,000 sedan has a certain French stylish interior with tons of space for a family of four on a road trip to the Grand Canyon. The trunk is small, however; there's no way you'd fit a bike or snowboard inside the car. But during the week I test-drove the Versa, it got me to trails in the forest, my yoga class and, yes, the natural-foods store, with gas mileage in town that neared 40 miles to the gallon. If I needed extra space, I could always use one of those Kayak or Thule removable roof trunks.

Tom Dwyer, my mechanic in Portland, whose automotive business is eco-certified, says "hybrids are a short-term step to where we need to be, which is a full plug-in." But plans for fully electric cars, thanks in large part to auto industry lobbying against them, and now the popularity of hybrids, have been relegated to the back burner by Detroit and Tokyo.

At best, hybrids remain a relatively expensive option for drivers who want to cut their gas use and emit less pollution; at worst, they're a way for the automotive industry to stall development of something closer to a zero-emission vehicle. So if status isn't at the top of your buying list for a new car, you might be better off indulging your driving vice in a Versa.