Does teen heartthrob Zac Efron's love of "mancake" foundation and "guyliner" put him on the edge of a new men's makeup breakthrough? 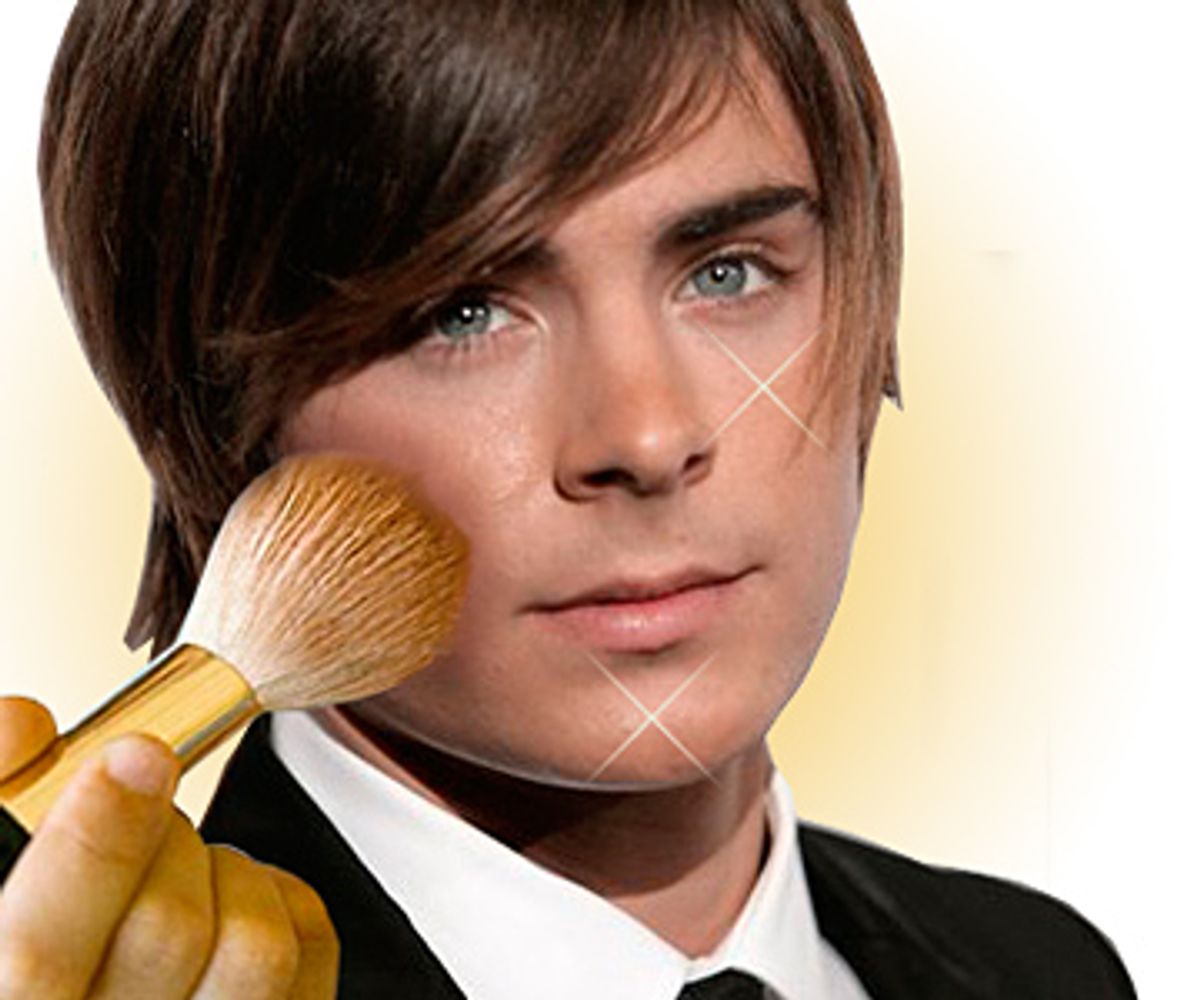 The ubiquitous "High School Musical" star Zac Efron has been setting tween hearts aflutter for the last year with his gleaming white smile, artfully tousled hair, and that poreless, bronzed complexion Cleopatra would envy. But what got the blogs and gossip columns buzzing this year was not his hairspray but his foundation.

Everyone from the gossip blogger Perez Hilton (who has lovingly dubbed Efron "Zacquisha") to the New York Times has weighed in on the star's penchant for "mancake" makeup. In an Arts section review of "High School Musical 2," the Times' Virginia Heffernan wrote: "While Ms. Hudgens glows like a proper ingenue, the hero Troy Bolton (cute Zac Efron) and the bad girl Sharpay Evans (Ashley Tisdale) are way too matte. It must be hard to light up the screen when you're darkened with as much bronzer as Laurence Olivier in 'Othello.'"

It's no secret that actors have been prone to powder their noses, but a growing number of high-profile guys are drawing notice for rocking suspiciously ruddy glows offstage. Alongside Efron, a bevy of pretty boys have been cited recently for egregious makeup application: John Mayer, Jesse McCartney, Ryan Seacrest. Fall Out Boy's Pete Wentz, the world's most approachable hipster and patron saint of "guyliner," even gave a sober demonstration on applying eyeliner in People magazine a few months ago that would have made the late Tammy Faye Bakker proud.

So are we ready to embrace makeup on men? After all, the Beatles' long-ish hair was once considered an affront to modest '60s sensibilities. Or will men's makeup go the route of the men's skirt trend circa 2003 that never quite took off?

If foreign markets are any indication, we may be slathering on foundation soon enough. The U.K. drugstore giant Boots has started carrying a men's makeup line, and H&M in London stocks mascara in its men's section. In Asia, Japan's Gatsby line of men's makeup and South Korea's Man Holding Flower line by Somang featuring "Color Lotion" are doing brisk business.

But the culture that gave birth to the rugged masculine ideal of the Marlboro Man may not be ready to reach for the blush brush just yet. A GQ survey in 2005 reported that "92 percent of men would not wear makeup even if it guaranteed them a more fulfilling sex life." U.S. sales figures seem to confirm the ongoing resistance to men's makeup. Tres Wilson, executive director of Clinique Global Treatment Marketing, said, "Clinique's Skin Supplies for Men M Cover [a concealer that debuted earlier this year] and Non-Streak Bronzer products sell very well in Europe, much more so than in the U.S."

Even in the metrosexual age, dabbing concealer on a blemish is seen as an emasculating activity. American ambivalence about men's makeup seems to run pretty deep, as GQ fashion editor Brian Coats can attest, "I just think it can be a scary thing for guys to wear makeup. I kind of understand that." Coats believes makeup on men is not a good idea for the general population. "A guy should look like a guy. I think in general, guys just look better natural."

Au naturale hasn't always been considered better or more masculine. Male makeup has a long history, starting with the Egyptians, whose men applied thick eyeliner to ward off the "evil eye." Roman men used chalk-based foundation to brighten their complexions, and, in the 18th century, Louis XV and his court made it vogue for men to put on gobs of toxic lead-based makeup and rouge. Interest in men's grooming ebbed in the 20th century, and more recent examples of men wearing makeup, like Kiss and David Bowie, have been either garish or intentionally provocative.

But Coats acknowledges that the rise of new urban dandies may be spurring an interest in men's makeup among those who came of age in the metrosexual era. "I think guys are grooming a lot more. They get a manicure and take care of themselves, especially if they're in an image business," he said. "You're spending a lot of money on your wardrobe; [makeup] goes with it."

Men may no longer raise a tweezed eyebrow at the thought of manicures and facials, but makeup still draws severe reactions. The aforementioned GQ survey found that 65 percent of men thought plastic surgery acceptable but that only 14 percent would consider using makeup for a 25 percent salary increase. It seems men would rather go under the knife than get paid to put on some makeup to cover up wrinkles.

The genius of the metrosexual concept was that the term divorced men's grooming and primping habits from homosexuality: A metrosexual man could feel secure in his heterosexuality even as he spread his legs to get a bikini wax. Makeup seems to have a harder time avoiding direct associations to gayness: The term "men's makeup" conjures Boy George and drag queens rather than Brad Pitt or Tony Blair dabbing on powder to conceal dark circles.

But a generation gap is starting to show. Sexagenarian Michael Douglas recently decried the proliferation of pretty boys in makeup, "Young guys are somewhat androgynous and use cosmetics. The lines [between men and women] seem to be getting much closer."

Whereas 28-year-old Pete Wentz sees himself at the vanguard of a cultural movement. He told the Advocate, "At some point when we were doing this band, I was like, 'You know what? I'm going to be the most androgynous person that I can possibly be. I'm going to wear girl pants and makeup.' I looked to David Bowie, Mick Jagger and people like that and I was like, 'That's what's missing in all the bands that we're playing with right now!' You need the effeminate edge."

Inanity aside, Wentz recognizes that his generation has an increasingly malleable definition of sexuality and gender identity. And just because guys say they wouldn't wear makeup doesn't mean they wouldn't, you know, wear makeup. John Varvatos, whose skin-care line aimed at men includes a concealer, commented to American Way magazine, "During the market research, the concealer was the most talked about and most requested product. You'd be surprised how aware men are of their skin flaws."

Many men prefer to keep their makeup desires on the down-low, and cosmetics companies are happy to oblige, employing discreet packaging and butch names. Take Jean Paul Gaultier's Brow and Lash Groomer: It is ingeniously designed to look like a pen. It's also mascara. 4VOO's impressive-sounding Confidence Corrector is a product better known as concealer.

Even the term "makeup" requires a makeover: The winning euphemism for men's makeup seems to be "enhancement." Jean Paul Gaultier refers to its line as "men's aesthetic enhancement." Sephora added a "complexion enhancers" category on its site a year ago, and Biotherm Homme's Power Bronze line of concealer and tinted gel is touted as "instant skin enhancement."

The cosmetics industry is salivating at the prospect of opening up this still largely untapped market. The global market intelligence firm Euromonitor projects that men's skin care will continue to grow at a torrid rate: "Companies like L'Oreal, Procter & Gamble and Unilever have the resources to lead sector growth by introducing brands into and getting men excited about the subsector."

As for Zac Efron, his cosmetic romance continues unabated. Time will tell if Efron and his makeup -- or rather, complexion enhancers -- will be celebrated someday as a trailblazer in the evolution of men's grooming or go down ignominiously as a Frankenstein of metrosexuality. For now, the face that launched a thousand blog posts remains beloved by his adolescent admirers. As a faithful fan commented on the YM Magazine board, "Whatever it takes for him to be that cute."