Spears calls us out in her new album, "Blackout," giving bad sex a half-assed hard sell. Do we still want a piece of her? 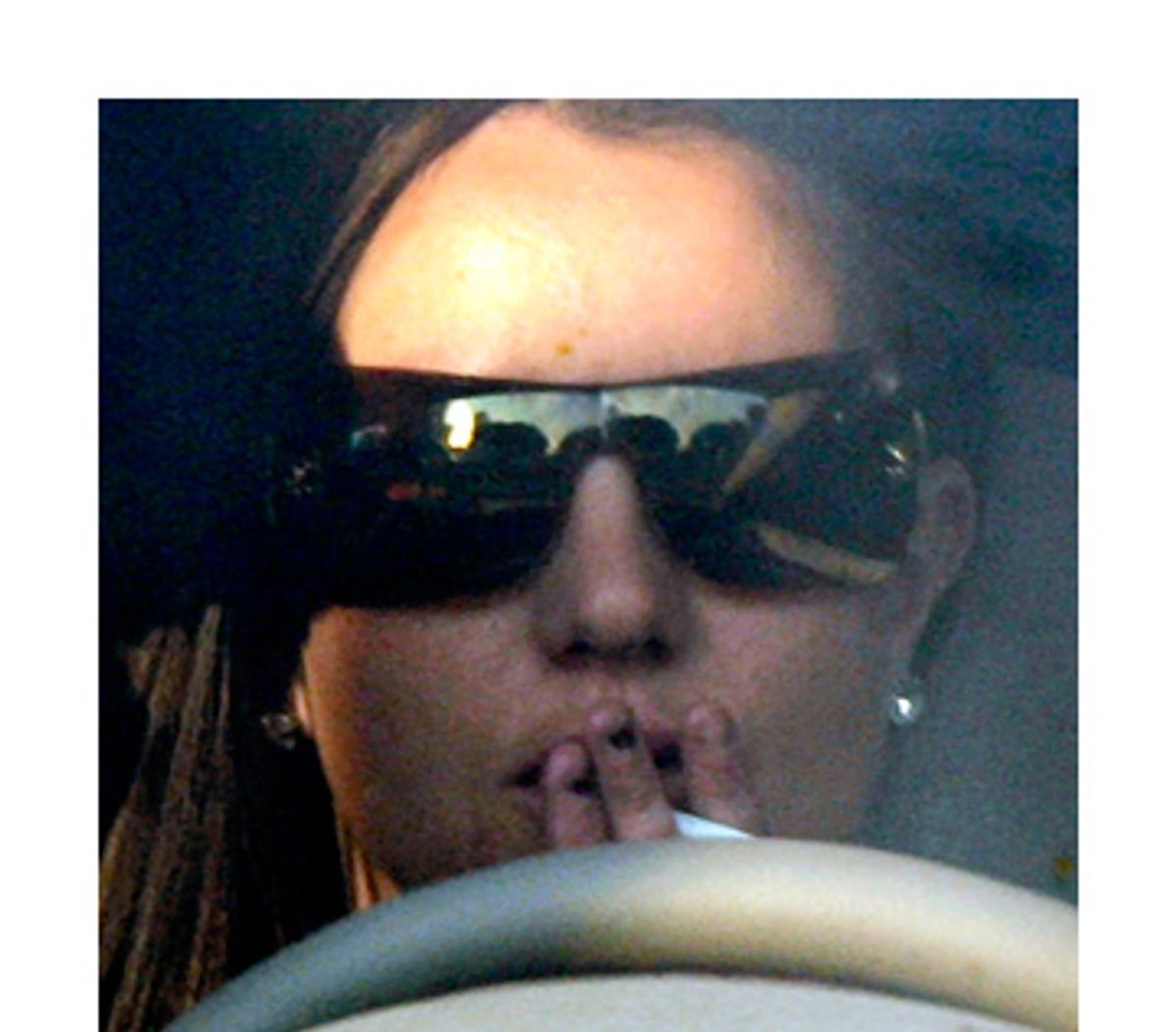 Britney Spears begins "Blackout," her first album of new material since 2003's "In the Zone," with the defiant, unnecessary assertion, "It's Britney, bitch." What did she call us? Surely anyone who has seen a magazine in the past five years knows that she is our bitch. Our head-shaving, drug-abusing, rehab-escaping, ProTools-needing, coochie-flashing, K-Fed-marrying, K-Fed-divorcing, child-welfare-endangering, bonkers-going, MTV Video Music Awards-appearance-flubbing bitch.

The tsunami of tabloid news she has generated -- so much that blogger Chris Crocker's cri de coeur in her defense generated its own backlash -- initially makes it a relief to realize that even during a maelstrom of overexposure, Spears managed to record at least one new hit, the electroclash-influenced "Gimme More." Michael Jackson was not as resourceful during his crises, but then again, he writes his own material, so personal trauma can directly affect his output.

For Spears, work might have meant text-messaging songwriter/producers of the moment like Farid "Fredwreck" Nassar, Kara DioGuardi, the Neptunes and others, taking direction from the impressive team assembled to create her brand, and keeping her name in the papers. She has always outsourced the basic creative components of her music -- all she needs to do is show up at some point and do something reminiscent of singing or dancing, like her zombieish turn at the MTV Video Music Awards.

Her record company would no doubt like us to consider this album a bold assertion of Spears' identity and, by extension, relative sanity. "Crazy" is acceptable in pop, clinically insane is not. But the self-consciously stylish tin-can beats on "Blackout," referencing every '80s synth phenom from Trio to Berlin and smothered with vocal tics cribbed from Beyoncé and Christina Aguilera, actually testify to Spears' absence, and point to the irrelevance of her modest contribution to the process of building her brand. With so many hot producers competing with one another, what you hear on "Blackout" are not songs so much as commercials for songs -- a team of professional songwriters frantically overselling and spinning the image of a celebrity who has essentially left the building. Spears could recoup a lot of the impression of vacancy if she could write a hit herself or, more important, pull off a dance sequence or public appearance without seeming utterly out of it. Her celebrity, like Madonna's, was built on visual teases like the Catholic school uniforms in her first hit video, "... Baby One More Time." There's something unsettling about a celeb so out of control releasing an album so competent. "Blackout" makes a good case for the Britney brand without curtailing the downward slide of the Britney person.

"Piece of Me" exemplifies the creepy, puppetlike quality of the record. Its lyric is composed of mild rejoinders referencing the controversy -- "I'm Mrs. Extra Extra This Just In/ I'm Mrs. She's Too Big, Now She's Too Thin" -- in the mode of "American Life," Madonna's low-selling, cranky analogue to Woody Allen's "Stardust Memories." But Spears, pushing one note throughout, severely undersells the toothless lyrics and unremarkable, quasi-French techno beats in a mechanized voice, singing "You want a piece of me" as a statement of fact instead of a challenge to fight. We're left with the sensation that, yes, Spears is aware she has been in the news.

And whereas Madonna wrote the book on sex, Prince wrote the Bible, Janet Jackson preached it, and Aguilera translated it, Spears has yet to read it. "In the Zone" made a special, if calculated, effort to burn off whatever residual Mouseketeer stigma remained with her, and for a moment we believed that a white chick from Louisiana would admit to being our slave. But "Blackout's" attempts at sexual liberation ache with desperation: In "Get Naked," Spears, presumably drunk and/or high at 3 a.m., accosts someone leaving a party with unsexy lines like, "Baby I'm a freak and I don't really give a damn" and "I'm crazy as a motherfucker." Maybe you'd better sleep this one off, Britney. Stop unbuckling our belt. Likewise, the "more" she pleads for in the Peaches-esque "Gimme More" is publicity, not sexual pleasure: "Cameras are flashing while we're dirty dancing/ They keep watching." Then there is the atrocious, patently ridiculous "Hot as Ice." Not only does any 3-year-old know that ice is not hot, any 23-year-old knows that declaring yourself cold, even indirectly, even accidentally, isn't the least bit arousing. No matter how much you coo and preen.

Spears' career has never felt quite so prostituted before. Her blank, low-energy vocals, punctuated by a gasp here, a moan there, don't help sell many of these commercials. The combination of her lackluster, faxed-in performances -- the vocal equivalents of her MTV dancing -- with off-putting horny come-ons creates a trashy atmosphere that sounds like lots of fun on the first couple of listens. In fact, it sounds like exactly the record she should make right now, given the erosion of her public image. But there's nothing empowering or inspiring about this extravaganza; her producers are simply talented enough to create greater demand for their own product while bypassing the issue of Spears' nonattendance. And by having her unenthusiastically give bad sex the hard sell, they callously drop off Spears in cheap hooker territory on their way to the next superstar.