Denzel Washington plays a ruthless drug kingpin and Russell Crowe the cop who wants to nail him in this jagged, messy movie. 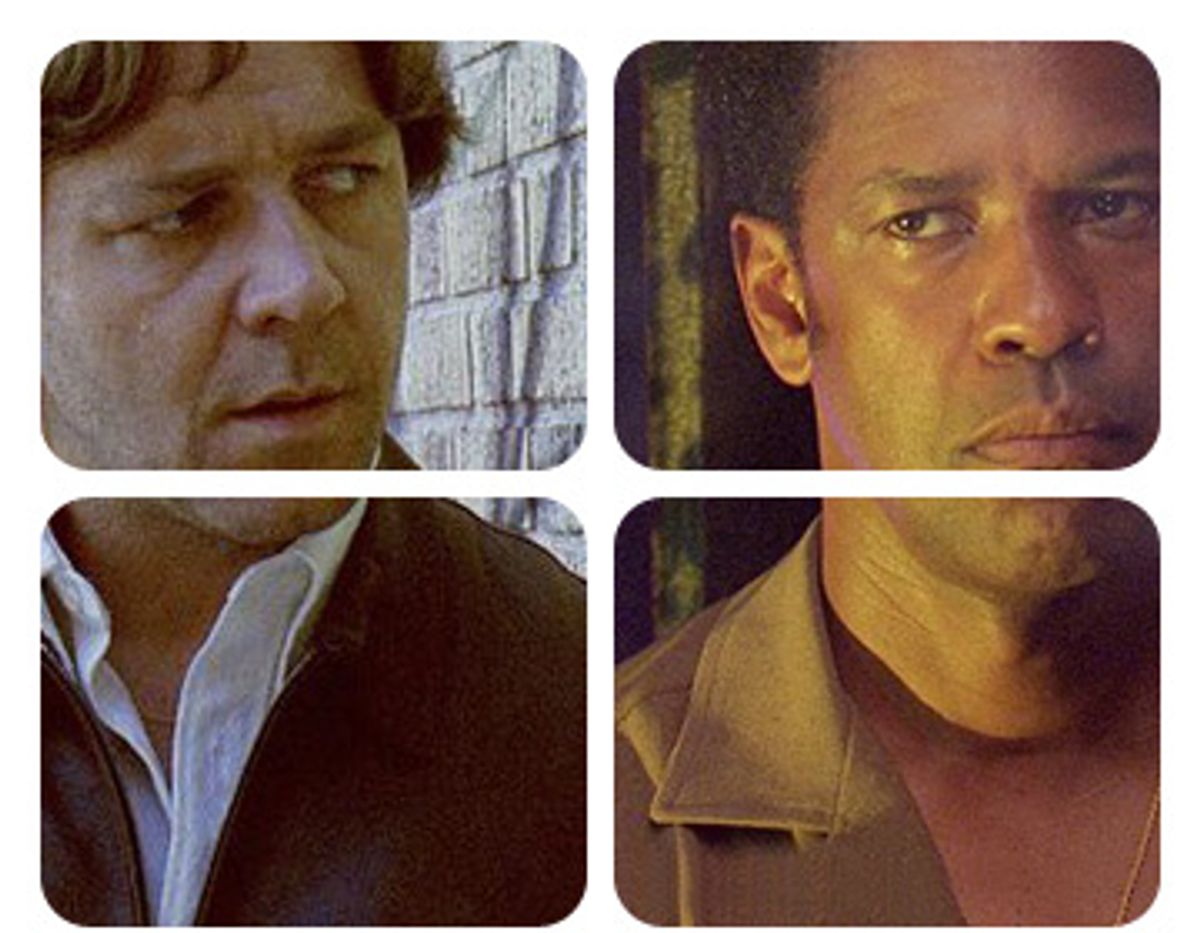 At the beginning of Ridley Scott's "American Gangster," Denzel Washington, as '70s-era New York drug kingpin Frank Lucas, empties a loaded gun into the body of a man who's begging for his life. The act may seem casual and impulsive, but it's as resolute and professional as the flourishing of a business card, a flashy introduction along the lines of "Pleased to meet you, won't you guess my name?" This character, a guy we know we shouldn't trust, is being played by one of the most charismatic actors in the movies: Whatever he's selling, there's going to be a part of us that wants to buy it, even against our better judgment. In those early minutes of "American Gangster," Washington offers a promise of salesmanship and showmanship that's irresistible.

But barely a half-hour into "American Gangster" -- which is based on the true story of how detective-turned-lawyer Richie Roberts took down (and, incidentally, later defended) Frank Lucas, an entrepreneur who got rich by finding ways to bring purer heroin to the masses for less -- I began to wonder if Ridley Scott was even aware that there were actors in his movie. In addition to Washington, he's got some fine ones to work with: Chiwetel Ejiofor is Frank's brother, Huey; Ruby Dee appears as the no-nonsense matriarch, Mama Lucas; and, most significantly, he's got Russell Crowe playing Richie Roberts.

But "American Gangster" offers only the stingiest platform for its actors, and as a piece of storytelling -- built on the foundation of a great story -- it's an epic that's been sliced and diced into so many little morsels that almost nothing in it has any weight. The script, adapted from a New York magazine piece by Mark Jacobson, is by Steven Zaillian, writer of "Schindler's List" and "Gangs of New York," and, more recently, the director of the deadly, prestige-bloated "All the King's Men." Zaillian's credit is supposedly one of the movie's big selling points, but the picture comes together as an abstract clutch of scenes rather than a fluid whole, or even a jagged one. Its serrated, corroded edge never cuts clean.

Because of the story's structure, Crowe and Washington don't have any scenes together until the very end. Until then, the picture crisscrosses and intercuts their stories, supposedly heightening their similarities and differences: Roberts is a scrupulously honest cop who chases any skirt that passes by; Lucas is a guy whose product destroys lives, but he's apparently loyal to one woman (a Puerto Rican beauty queen, Eva, played by Lymari Nadal). But as two intertwining character studies, "American Gangster" never goes much deeper than that.

Lucas gets his start as a driver, bodyguard and "collector" for a Harlem figurehead named Bumpy, the sort of complicated, fascinating character who earns respect in his community by looking after the regular folk even as he mows down anyone who stands in the way of his ambitions. It's Bumpy who teaches Lucas the fundamentals of American business, the importance of serving the customer's needs and also of refusing to let anyone undermine you. And so Lucas becomes the kind of guy who rises at 5 a.m. to begin his workday, dresses in tasteful, impeccably tailored suits (bad stuff happens the one time he wears a flashy gangsta fur), and on Sundays, escorts his elderly mother to church. Lucas runs his business by the sound principles Bumpy taught him: "My company sells a product that's better than the competition, at a price that's better than the competition," he says with pride. His business just happens to be importing, processing and selling heroin, which he sources in Vietnam: Sometimes it's carried back by returning soldiers; other times it enters the country more ghoulishly, in servicemen's coffins that have been appropriated specifically for the purpose.

Meanwhile, on the other side of the law, Roberts conducts his professional life with the same degree of scrupulousness. When he finds a case full of drug money, he turns it in instead of keeping it, an act of trusting honesty that turns him into the punch line of a lifelong joke. While working as a detective, he's also studying to be a lawyer. (When he gets the news that he's passed the New Jersey bar, he scrutinizes the letter with obvious, if subdued, pleasure, and then sets it aside for later -- he's got work to finish as a cop first.) Roberts has seen firsthand what drug use does to people, including cops, and he's even more attuned to what corruption does to people, especially cops. His dual enemies are drug traffickers (Lucas is so canny and elusive that for most of the movie, Roberts has no idea who he's really looking for) and the crooked cops who are more concerned with making money off those traffickers than with catching them (personified by Josh Brolin's Detective Trupo, a heavy ordered up straight from central casting, in a slick black leather jacket and a nail-brush mustache).

"American Gangster" doesn't need to set up those false semi-parallels between Roberts and Lucas. That Scott feels the need to do so suggests that, subconsciously at least, he doesn't trust the actors to give these characters interesting contours on their own. Many of the scenes here feel truncated, unshaped, rushed: Just as I'd feel I was finally getting a chance to hunker down and focus on what Washington or Crowe was doing, Scott would sweep the action elsewhere. (The supporting actors have it worse: Ejiofor, who has a total of about five lines, is barely an accessory. Dee does manage to wrest control in one small scene -- but then again, she's Ruby Dee.)

Scott apparently wants to use "American Gangster" to tell a dozen different stories: The picture is a little "Superfly," a little "Scarface," a little "Serpico," and yet not enough of any them. That's frustrating, because Scott does at least have a grasp of old-fashioned movie-star glamour (you don't cast actors like Crowe and Washington if you don't), and the picture's morality is the old-fashioned Hollywood kind, which, done right, can be deeply satisfying.

"American Gangster" does glamorize the gangster as icon -- again, you don't cast Denzel Washington unless you're willing to accept that charisma is often the secret weapon of the successful crook. But Scott also includes -- to an almost laughable degree -- plenty of unpalatable shots of needles penetrating not just virgin skin but assorted boils and bruised veins, and there's also the obligatory shot of a bewildered-looking toddler wailing plaintively next to his OD'd mother. Scott wants to be conscientious, but he also wants to titillate and excite us. Those goals can bump against each other uncomfortably, and at the very least, Scott seems aware of that. While there's violence in "American Gangster," it's fairly muted. We may hear gunfire, we may see splats of blood, but Scott is more interested in artful cutting than in seducing us with excess. It's a choice that suggests some thought; he's not courting the moviegoing audience's more bloodthirsty impulses. And cinematographer Harris Savides gives the picture a suitably brooding aura, without making it look too murky or dead.

But even if Scott has given some thought to how he feels about these characters, his ideas don't always translate clearly. Scott doesn't set Lucas up as a hero, but he also seems a little snowed by him: He's fascinated, perhaps too fascinated, by the way Lucas applies the rules of civilized commerce, and a grand degree of personal decorum, to the business of drug dealing. (After his arrest and conviction, the real-life Lucas was sentenced to 70 years in prison, though he served only 15 for cooperating with authorities by nailing his crooked-cop associates. He and Roberts, both of whom acted as consultants on the movie, are friends.) Washington's performance allows at least some complexity to come through: We see him flashing that zillion-watt smile when he faces his public -- his mother, his family, the neighborhood people he wants to impress. We also see his blankness in the face of what his product -- this product he's so proud of -- does to people, especially, among his clientele, black people. Washington's chief value as an actor lies in his coldness, not in his charm. Here, Scott generally seems too taken with the charm and not strongly enough attuned to the coldness: It's possible that Washington's performance -- as he gave it while the cameras were rolling -- contains more of a chill than we see in the finished product. There's no way to know for sure.

Crowe makes even less of an impression, perhaps partly because the conscience-stricken cop, dressed mostly in schleppy undercover clothes, is admittedly a less flashy one. Crowe is an actor who doesn't need flash. What he does need, though, is a bit of breathing room, space to stretch out in a scene and let us see how his mind is working. "American Gangster" doesn't afford him that. That's strange, because whatever Scott's flaws may be as a director, he at least understands -- from the exhilarating "Gladiator," and even from the clumsy but likable "A Good Year" -- the depth that Crowe is capable of. For Crowe, this is a restrictive role in a restrictive movie: He plays his character with perfect dutifulness, yet he barely registers as a presence. At one point, a mob bigwig named Dominic Cattano played -- or maybe "overplayed" is the better word -- by Armand Assante invites Lucas to his pretend English manse, somewhere, we assume, in New Jersey. "The whole place is imported, brick by brick," he tells Lucas proudly, showing off the estate's unreal authenticity with the sweep of an arm. "American Gangster" is a movie that feels imported, brick by brick, partly from real life and partly from the imagination of its creators. Unlike that mansion, it doesn't stack up.