Heard the buzz? Jerry Seinfeld's back ... as an animated bee. But this low-flying movie has no sting. 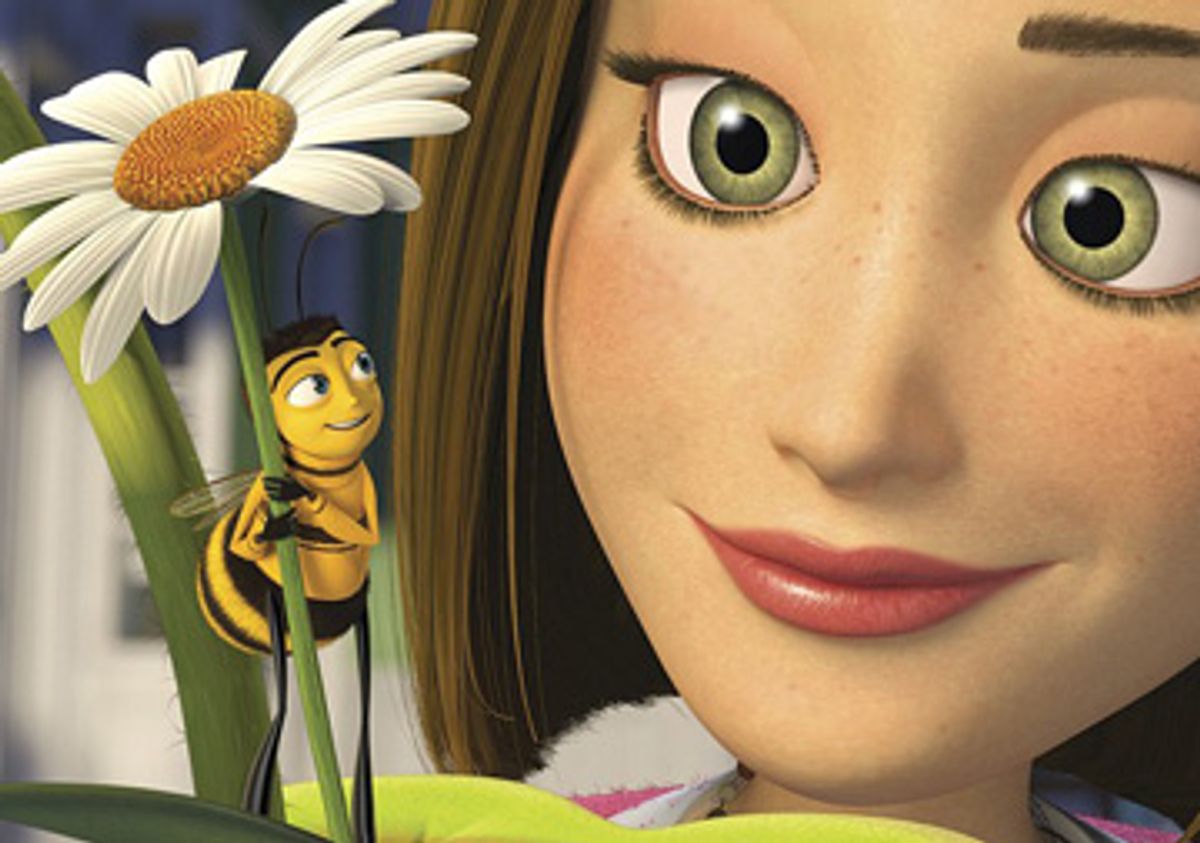 Over the past month or so it's been impossible to pick up a major, or even a minor, entertainment publication and not see a story describing the animated feature "Bee Movie" as the return of Jerry Seinfeld -- even though he's returning to us only as a cartoon bee named Barry. Although Seinfeld has been doing stand-up comedy regularly since the end of his hugely popular eponymous TV show, the fact that he hasn't been coming into living rooms regularly has made him seem somewhat invisible. That may be why his involvement with "Bee Movie" -- which he co-wrote with Spike Feresten, Barry Marder and Andy Robin, and also co-produced -- has been treated by the press, if not necessarily by fans, as a sort of second coming.

Seinfeld's sensibility, so oblique it's concrete, does surface now and then in "Bee Movie": The picture is peppered with jokes that are there, and yet not fully there, like the holes in French bread. There are a few great gags, including one in which Barry, having dodged certain death via a rolled-up shopping circular, explains how every bee learns to fear modest and glossy periodicals alike: "I lost a cousin to a copy of Italian Vogue," he tells the human friend Vanessa (voiced by Renée Zellweger) he's got a crush on.

But "Bee Movie" is just another ambitious, lavish animated adventure, pretty enough to look at, but ultimately foundering on the weakness of its script. Barry B. Benson is a bee like any other, having gone to school for three days (one each for grammar school, high school and college) in preparation for a lifetime of work, work and more work at the honey-producing corporation known as Honex. Each bee at Honex gets a job to do, which he happily does for life. Barry's best pal, Adam Flayman (Matthew Broderick), is OK with that arrangement, but Barry wants more out of his little bee life. His parents, Janet and Martin (their voices belong to Kathy Bates and Barry Levinson, respectively), don't see what the problem is. "Would it kill you to make a little honey?" they implore. But Barry is too curious about the world outside the hive: He wants adventure, and when Vanessa, a kindhearted florist, first scoops him out of harm's way, he understandably falls for her. As he spends more time in the human world, he realizes, with horror, that people actually steal honey from bees. He tries to redress that wrong by suing the human race, with consequences he never could have predicted.

From an environmentally conscious point of view, the core idea here is sound enough, particularly if you've paid any attention to the recent news stories about how the decreasing bee population threatens to alter the delicate balance of our environment. But that doesn't make the jokes in "Bee Movie" any funnier, or the characters any more appealing. Nor does it make the animation more impressive or more charming. "Bee Movie" has a soft but vibrant color palette, and the design of the characters is pleasing enough: Barry has an inquisitive expression, and flits around in a black-and-yellow striped sweater with coordinating Chuck Taylors at the end of his spindly little legs. Vanessa, with her alert, almond-shaped eyes, doesn't have the creepy hyperhuman quality of the characters in the "Shrek" movies: She looks blessedly cartoonlike (and I'd be remiss if I didn't also point out that, in her fitted striped cardigans and pedal-pusher jeans, she also has a pretty nice rack).

But "Bee Movie" just lacks spirit and energy. Part of the problem may be that, as far as I'm concerned, any animated movie released this year (and possibly in years to come) suffers in comparison with Brad Bird's "Ratatouille," a beautifully animated picture whose details and design serve a story and characters that are solid to begin with. "Bee Movie" is clever enough, but only in fits and starts. Too many of the movie's gags are just filler: The pollen jocks, those lucky, supermasculine fighter-pilot types who are chosen to leave the hive and pollinate the world of plants, are praised as "nectar collectors." When Barry and Adam graduate from college, Barry, looking at the assembled mass of bee-students, remarks, "Wow! Quite a bit of pomp -- under the circumstances." Even the Italian Vogue gag is recycled later in the movie, and it's funny only the first time. Only Chris Rock, as a bloodthirsty mosquito, gives the picture any recognizable jolt of life. The rest of "Bee Movie" neither floats like a butterfly nor stings like a -- well, you know. That buzz around it is nothing more than hype.