Stop lying to yourself. You love Dennis Kucinich

Democratic primary voters, you agree with him about (almost) everything, and you know it. 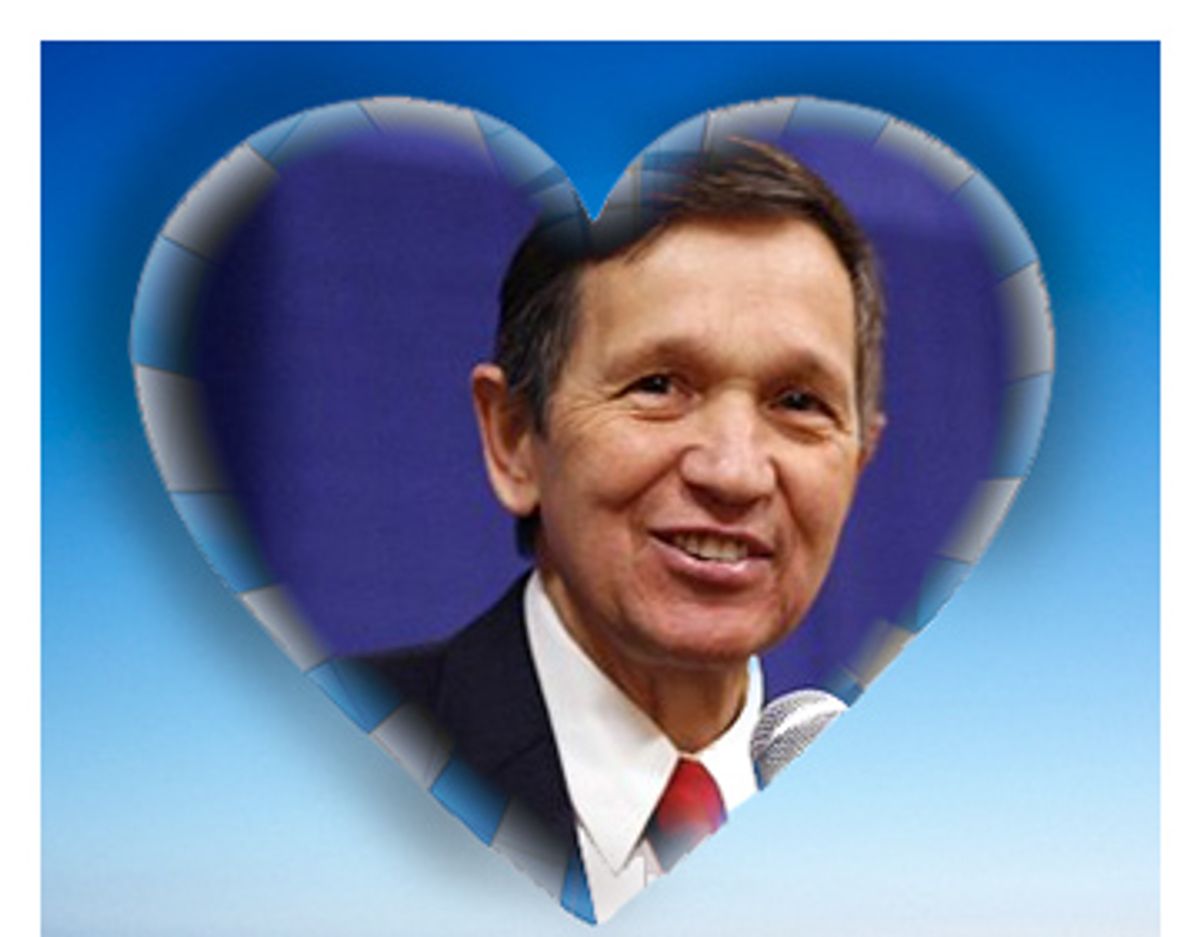 It has recently come to my attention that you (and by "you" I also mean "I") are in the grip of mass self-delusion. It's long entrenched, and reinforced every night as many of you swig your beers or glasses of wine, lean over your keyboards and earnestly debate the merits of John Edwards and Barack Obama, fret over Hillary Clinton's authenticity and calculate the chances of Bill Richardson and Chris Dodd.

You are lying to yourselves. In a quest for an "electable," "not insane" presidential candidate, you are willfully overlooking the candidate who actually comes closest to representing the things in which you really believe: justice and peace and the basic freedoms that should be afforded to every American, regardless of race, class, religion, gender, sexual orientation or galactic origin. In an effort to distance yourself from the squish of the Birkenstock and the stench of the patchouli, you have convinced yourself that compromise and pragmatism light the path to the White House. And you are correct. But still, before walking listlessly down the aisle toward our impending union with tepid centrism, let's rip our clothes off for one final, ill-advised fling with ideological honesty:

Dennis Kucinich is our man! If he can't do it, well, that's because we're all chickenshit and condemned to a future of our own making. Yay, Dennis!

It's true, and I suspect many of you think it to yourselves, perhaps even confess it sotto voce to your loved ones during each Democratic debate (especially the ones where he doesn't mention the UFO): If the Democratic base pulled levers for the candidate whose policies best reflected its own beliefs, Dennis Kucinich should win his party's nomination in a landslide.

OK, sure, his reign as mayor of Cleveland was a mess. He has never passed a piece of legislation. He loves to flash peace signs that provoke flashbacks of your crazy Aunt Martha's annual Woodstock slide show. The fact that when you try to picture him at any sort of summit, you quickly envision Nicolas Sarkozy stealing his lunch money leads you to suspect that he might be an ineffective player on the world stage. He is a vegan. He has been compelled by his sense of honesty, and his close personal friendship with Shirley MacLaine, to disclose his encounters with extraterrestrial life. Also, he really does bear an unfortunate resemblance to a leprechaun. Not that there's anything wrong with that.

Extra-repellent are the signifiers that surround Kucinich: the hippie-dippy factor of his supporters and their wavy-gravy, pierced, peacenik naiveté. You don't want to descend into the Unitarian Church basement and talk about peace over potluck fruited rice casseroles. Because, sure, you might believe in peace, you might want peace, but you don't want to text peace. And you'd sooner eat a bucket of trans fats than talk about it with a bunch of Hacky-Sackers in Phish T-shirts. It's just like how you believe the music of Bruce Springsteen is important but don't attend his concerts because you prefer not to picture yourself in the company of overweight men from New Jersey who wear unironic mustaches and know the air-guitar chords to "Glory Days."

But here is the truth: If you believe in universal, single-payer healthcare and that campaign finance and electronic voting are corrupt; if you hate the Patriot Act and believe it erodes civil rights; if you believe that gay people should have the same rights as straight people, that America should rejoin the Kyoto Protocol and take steps to halt global warming, that we should invest in alternative fuel sources, that our water and air need to be protected from pollution and overuse, that the government should reduce the amount of money it spends on war and instead work to improve the country's education system, and that going to war in Iraq was a terrible and tragic mistake, then you are that guy playing air guitar, and he is you.

Denial is not just a river in Egypt. It's time to come clean and admit that we are a Dennis Kucinich-loving party trapped in Hillary Clinton-supporting bodies.

This is not such a joke, actually. There is no better illustration of exactly how far right political discourse has swung, and how self-loathing and beaten down the Democratic Party has become, than that among its presidential candidates, the one most willing to consistently, unapologetically stand for the things on which the party is supposedly built (some of your more basic civil liberties) is also the guy who believes in aliens.

If you don't believe me, take some of the presidential polls floating around out there, the ones that ask you to answer questions about the issues and then show you a graphic embodiment of the candidate with whom you are best matched. Try this one, for example. Watch as Kucinich's big goofy head floats toward you, taunting you with how far you've strayed from the reasons you originally invested in the democratic process. Here's a different version of it, in which your preferences are tabulated visually after each answer; you can watch for yourself as Denny the K makes his inevitable, inexorable climb to the top. This one and this one aren't as fancy, but answer the questions and see whom you get. Go ahead. And yeah, I know, you're also getting Mike Gravel: Doesn't that just drive the point home, folks?

It's time to come clean, American liberals. Or progressives. Or whatever nonthreatening word you've quietly adopted for yourself these days in the vain hope that Ann Coulter will not use it in an emasculating Christmas jingle: You love you some Kucinich.

*Not that I plan to vote for him. That would be crazy.