This toy would be totally fun if it weren't made of small poisonous beads. 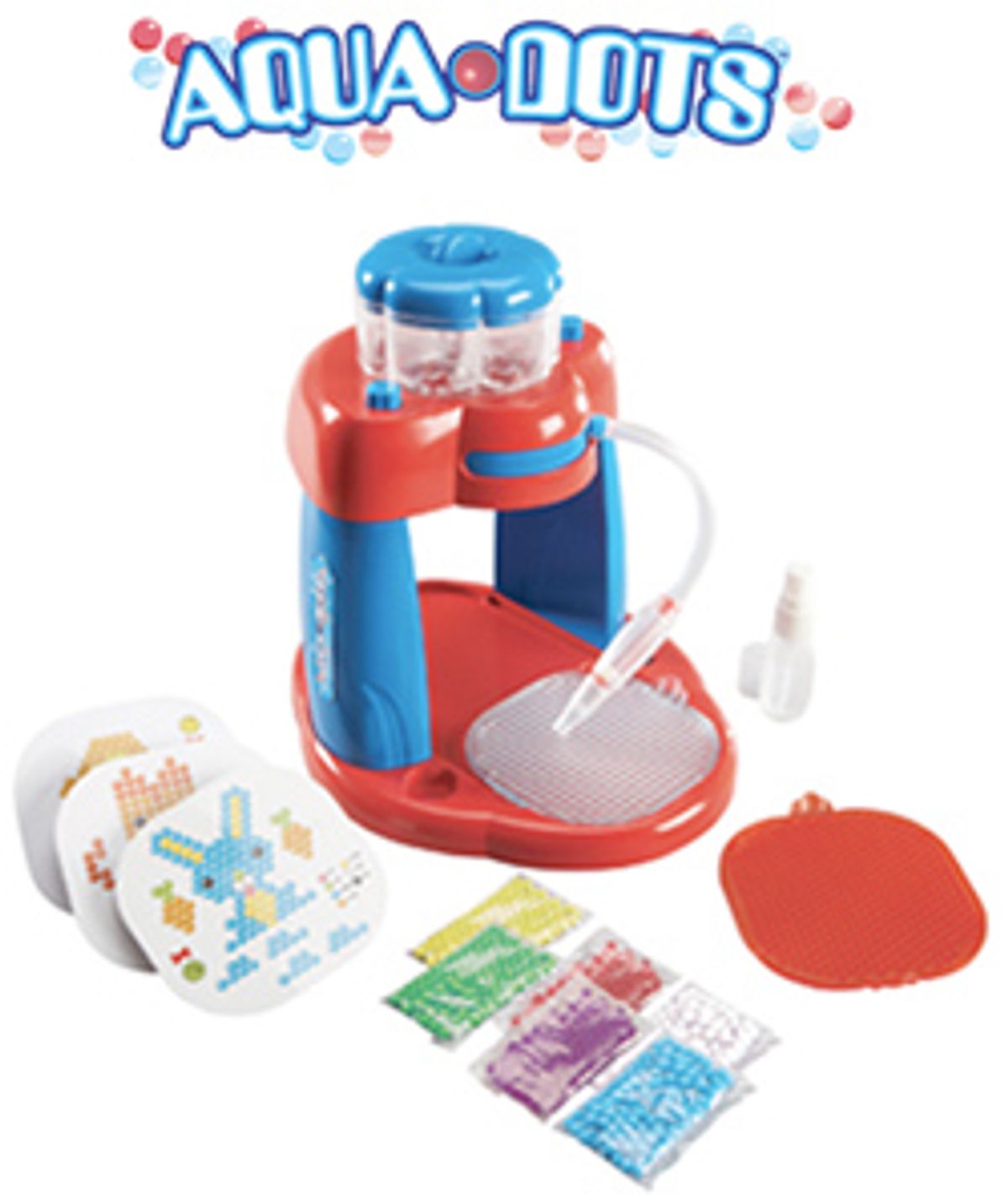 Aqua Dots would seem inadvisable for little kids even if the toy didn't release a date-rape drug when ingested. The thing's basic component is small beads. Using a smart-looking applicator, kids arrange the beads on a grid in little crafty patterns. Then you spray the beads with water and, voilà, they fuse together. The finished product looks something like three-dimensional beady works of needlepoint.

Kids love Aqua Dots! In Australia, where they're sold under the brand Bindeez, they were named the country's Toy of the Year. I wonder if the bayonet and bottles of Xanax have been previous Australian Toys of the Year -- because, really, did no one think of the extremely obvious danger here? Let me say this again: Aqua Dots are small beads that look like M&Ms. It's kind of like a toy involving candy cigarettes, except that the cigarettes aren't made of candy but tobacco. And they're made of a date-rape drug.

Because, right, it turns out that's the story with Aqua Dots. In a fantastic piece today, the New York Times' Keith Bradsher explains how doctors in Sydney, Australia, spent a couple weeks getting to the bottom of the menace posed by Aqua Dots -- leading to international recalls of the product, including one in the United States this week by the Consumer Products Safety Commission.

Early in October, a 2-year-old boy was admitted to a Sydney hospital after he fell into a coma and began suffering seizurelike spasms. Kevin Carpenter, a biochemical geneticist in Sydney, discovered traces of Gamma-Hydroxybutyric acid, or GHB, in the boy's urine. GHB has been used as a rave drug -- at low doses, it causes a sense of euphoria -- and in the commission of date rape.

Carpenter learned that the boy had ingested Bindeez beads. When he tested the beads in a mass spectrometer, he found they contained traces of an industrial chemical that keeps glue inactive -- the chemical dissolves in water, which is why the beads stick together when you wet them.

The chemical, which is tightly restricted, breaks down in the body to become GHB. Carpenter, as Bradsher notes, contacted the toy's Hong Kong manufacturer for a list of chemicals used to make the toy -- the list did not include the dangerous chemical.

Aqua Dots are distributed in the United States by a Canadian company called Spin Master. They're heavily advertised on TV during kids shows; they're sold through mail-order ads as well as on various Web sites, and demand is high. In the wake of the recall, many online stores -- Wal-Mart, Amazon and others -- have taken down their listings for the product.

But one site -- AsSeenOnTV.com -- says it's still filling orders for Aqua Dots. It'll only send out your order, the site says, when the product is deemed safe.

If you have any Aqua Dots at home, you should pry them from your kids' teeth and send them back to the manufacturer for free replacement beads (presumably safe ones) or another toy of equal value. Details are at aquadotsrecall.com.

Can I suggest something? If you're returning them to the company, please elect to get another toy rather than more beads. Please? No matter how fun it may be, your kid's better off playing with just about anything else -- plastic bags, pickaxes, "Waterbaording for Dummies," fertilizer, the ultraviolent video game "Manhunt 2," a large aluminum pole during a thunderstorm, anything other than potentially poisonous small beads.