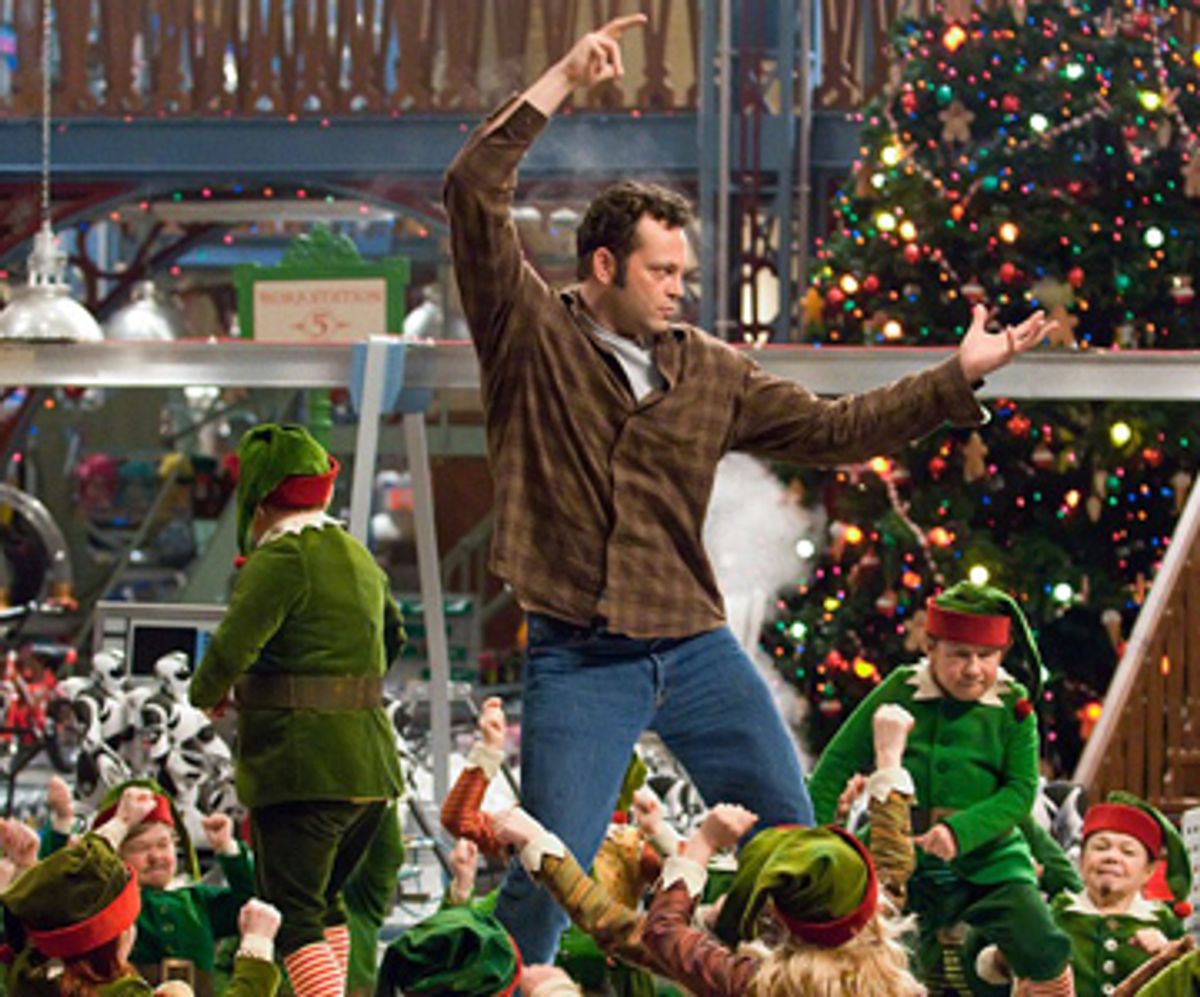 It's now been three Christmases since the near-miraculous appearance of Terry Zwigoff's perversely uplifting holiday classic "Bad Santa," a picture so rapturously disreputable that it's become the gold standard for people who generally can't stand holiday movies. A holiday movie like "Bad Santa," so filled with sex and swear words that it couldn't be anything but life-affirming, is a rare and wonderful thing. Still, every year hope springs eternal: This year's entry in the holiday-malaise sweepstakes is "Fred Claus," directed by David Dobkin, who not so long ago gave us the sufficiently cranky surprise hit "Wedding Crashers." In "Fred Claus," Vince Vaughn is the Fred of the title, the older sibling of the way-too-saintly St. Nick (played, with neurotic believability, by Paul Giamatti -- just in case there's anyone out there who still happens to believe).

Fred makes his living as a repo man (his shabby Chicago digs are furnished with gleaming repossessed finds like exercise bikes and plasma-screen TVs), which tells us right off that his cup doesn't exactly runneth over with the milk of human kindness. He has an opportunity to make some big bucks, but he has to borrow big bucks to do it: He rings up the North Pole to sweet-talk his kid brother into a quickie loan, much to the dismay of Mrs. Claus (a pleasingly persnickety Miranda Richardson), who thinks her husband is too much of a softie.

Nicholas agrees to give Fred the money, but only if he'll come up to the North Pole and work for it. Fred shows up, scowling and with bags under his eyes, and immediately starts stirring up trouble, criticizing the toy-workshop DJ (played by Ludacris, in a role that's way too small for his outsize but as yet untapped talents) and, later, providing a window of opportunity for a conniving efficiency expert named Clyde (Kevin Spacey) to shut the North Pole down once and for all.

"Fred Claus" is a Christmas-morning glut of well-cast actors: The others who show up include Kathy Bates (as Nick and Fred's overcritical mom), Rachel Weisz (as Fred's long-suffering girlfriend), John Michael Higgins (as the most helpful and also the most insecure elf) and Elizabeth Banks (as a perky toy-shop-floor manager). But the movie -- its script is by Dan Fogelman, from a story by Fogelman and Jessie Nelson -- is both too sprawling and too stingy to give any of them much to do.

The picture starts out with an intriguing back story (in which the young Nicholas is painted as an insufferable do-gooder, to the extent that he ends up causing his older brother untold suffering). But the movie alternates between sluggish sourness and sludgy sentimentality. It jumps to life near the end, with a thrilling gift-delivery montage set to the Waitresses' brilliant "Christmas Rapping." And the production design, by Allan Cameron, does give us a spiffy North Pole, a snow-globe village of cozy snow-draped houses and twinkling lights, with interior details that appear to have been carved out of gingerbread-colored wood. (Much of the picture was shot at Pinewood Studios, reminding us that a beautifully built movie set can be a lot more magical than, say, Vancouver.)

But even though Vaughn knows how to build a pretty good performance out of little more than exasperated eye-rolling, he's just coasting here, and his scenes with Giamatti have no weight and no energy. There's some mild excitement when the two goad each other into a rambunctious snowball fight, but even that sequence devolves into listless, sloppy slapstick. "Fred Claus" does feature some very nicely groomed reindeer, a far cry from those patchy, depressed-looking creatures you see every holiday season at the petting zoo. They're prancing and dancing as fast as they can, but they can't pull "Fred Claus" from the rut it's in.