That old poem you read in school, only with sexy bits -- a digitized Angelina Jolie, naked and dipped in gold -- added. 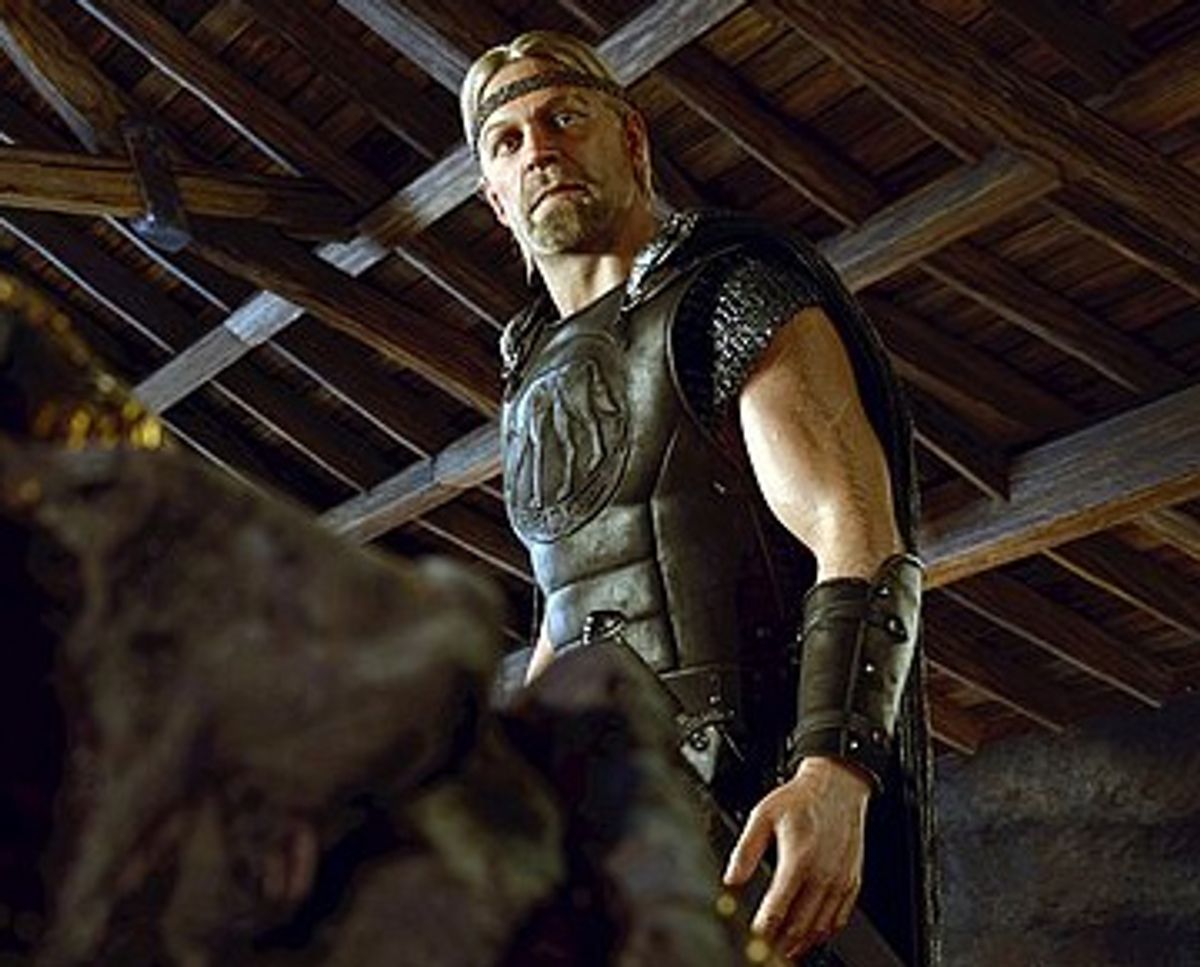 When I was a little girl, I was terrified and mesmerized by a movie I saw once on Saturday afternoon TV called "Attack of the Puppet People." I now know it was made by B-movie horror guy Bert I. Gordon, in 1958, but at the time, all that mattered to me was the creepiness of the concept, which involved some mad loner with a penchant for trapping human beings and shrinking them down so they'd fit under little glass domes.

That's what I think of whenever I hear the words "performance capture," which is what Robert Zemeckis calls the technique he developed for his 2004 creature feature -- I mean, delightful children's tale -- "The Polar Express." "Performance capture" means that digital sensors are attached to actors' bodies (which are first sheathed in Lycra suits) so their movements can be recorded and input into computers. The data is then used to make an allegedly realistic, expressive 3-D image -- Zemeckis' very own puppet person! Far more malleable than an actual actor, and more human, too -- just look at the texture of that skin, so realistically latexlike!

"Beowulf" is Zemeckis' latest foray into soul sucking -- I mean, performance capture -- and if you're thinking that the so-called filmmaker has hunkered down to make a nice, faithful adaptation of the 2000 Seamus Heaney translation of that weird, melancholy epic poem (you optimistic thing, you), you should know that this "Beowulf" has been adapted, reimagined and souped up by writers Neil Gaiman and Roger Avary. After the hero of the title, "played" by Ray Winstone, severs the arm of Grendel (Crispin Glover), the scary, anguished creature that has been terrorizing a community of mead-swilling Danes, a comely cutie wonders aloud if all of Beowulf's strength is in his arms -- or if he's got it in his legs as well, especially the "third" one.

You see, the "real" Beowulf is not a particularly sexy story, and Zemeckis knows it. "Frankly, nothing about the original poem appealed to me," he's quoted as saying in the movie's press notes, recalling that he'd been made to read the damn thing in junior high school. "But when I read the screenplay that Neil Gaiman and Roger Avary did, I was immediately captivated." He asked Gaiman and Avary why their script was so exciting when the poem was so boring. They explained that the poem was written somewhere between the seventh and the 12th centuries, although its story had been passed along verbally for hundreds of years. Since the only people who knew how to write in those days were monks, Avary and Gaiman figured these reputable men of the cloth would have edited out all the juicy bits, so they added some back in. If you see "Beowulf," you'll have plenty of opportunities to stare down computer-generated cleavage, and one rowdy, bearded, tattooed warrior crows to one of his conquests about how much noise he makes when he comes. Personally, I file that under "TMI," especially coming from a cartoon character, but you have to admit it would knock any monk off his sandals.

There are certainly ways in which Zemeckis' "Beowulf" is faithful to the original story: Like the poem it's based on, the movie is partly about the dangers of having power. Actually, there's nothing all that wrong with what Avary and Gaiman have done with the story; they simply wanted to make a movie that would be engaging to audiences, and there's no law that says a screenwriter has to follow his source material letter for letter.

The big problem is that "Beowulf," like "The Polar Express" before it, is just so damned creepy to look at. The characters, in their chain mail and woollies and rough homespun gowns, move more smoothly than any mere human being ever could; their skin has a weird, clammy look, and they peer out of glassy humanoid eyes. There's something very "Children of the Corn" about them -- with the exception of pitiable Grendel, the spiritual cousin of J.R.R. Tolkien's Gollum, who, with his pink-gray skin gleaming through coppery scales, and his huge, blubbery lips, is more believable than anything else in the movie.

But he's killed off pretty quick. The movie's violence is largely of the cartoon sort (sea monsters being stabbed in their one good eye, that sort of thing), and much of it is just an excuse for IMAX folderol (there are lots of phallic 3-D effects, like big pointy swords coming right at ya). But if your child had to sleep with the light on for a week after seeing "Ratatouille," you should know that Beowulf does get a little rough in places. (The picture is rated PG-13.)

What about the other actors who have been performance-captured here, people like Anthony Hopkins (who plays Hrothgar, the king), Robin Wright-Penn (his loyal wife, Wealthow) and Brendan Gleeson (Beowulf's right-hand man, Wiglaf)? And what about Angelina Jolie, whose naked digital form has been dipped in gold for her portrayal of Grendel's sexy (but deadly) mommy? They all give performances that would be perfectly OK, if only their voices weren't locked into these rubbery, phony shells.

"Beowulf" is ambitious, overbearing and hollow; it goes overboard to impress, yet it never feels truly inventive or imaginative. At best, it achieves a level of clumsy camp. It has become hard to remember the days when Robert Zemeckis -- formerly a wonderful filmmaker -- made real movies, things like "Cast Away," "Death Becomes Her" and "Back to the Future," though they weren't all that long ago. Even the sentimental crowd-pleaser "Forrest Gump," no matter how you feel about it, is an extremely skillful piece of filmmaking. I don't recall much about the actual plot of "Attack of the Puppet People," except being disappointed -- if a little relieved -- that the miniaturized captives never really attacked anyone. But maybe, someday, Zemeckis' puppets will stage their own revolt and save him from himself. Freed from their figurative glass domes, they could at least be actors again.