"Love in the Time of Cholera" 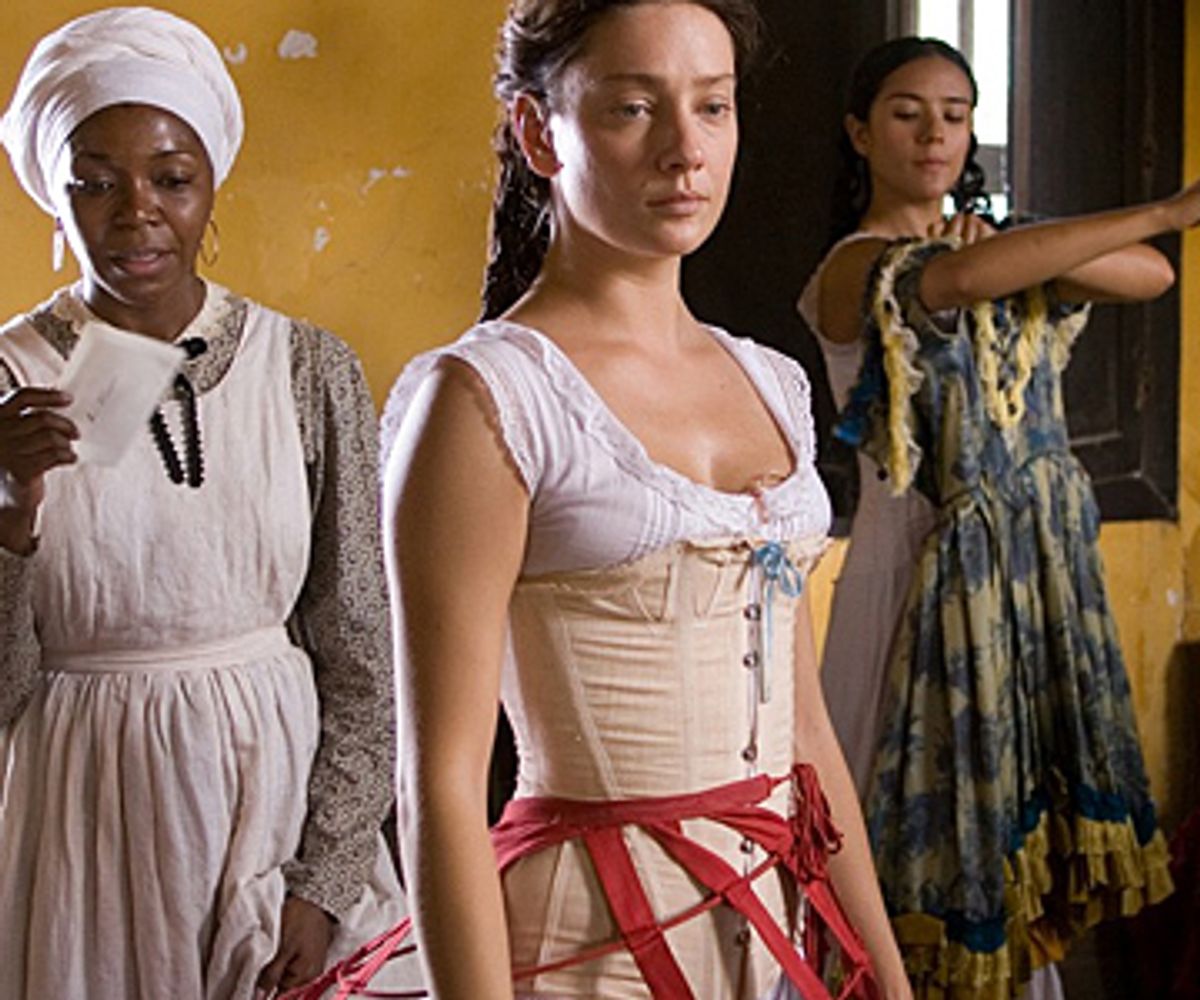 It might be a good idea for every theater showing Mike Newell's "Love in the Time of Cholera" to install extra fire extinguishers, maybe even hire a few intimidating-looking policemen to stand around with their arms folded. Forget the exhausted argument that no movie adaptation can ever match the pleasure of reading: Once fans of Latin American novelist Gabriel García Márquez get a load of the stink-burger Newell has made out of this much-adored book, there'll be rioting, firebombs and general mayhem. Or at least many indignant snorts.

García Márquez's 1985 novel tells the story of a man who, in his youth, pledged eternal love to a woman who ultimately rejected him. Yet he kept his pledge, returning to court her in old age, after the death of her husband. The story unfolds in a rich, leisurely fashion, and once you settle into it, it's seductively evocative. García Márquez writes about love in a way that reminds us it's a part of nature. The story is set in Colombia in the late 19th century to the early 20th, eras in which people still wore oppressively proper clothes, even in warmer climes. García Márquez makes us feel every droplet of heat and humidity -- this is a place where time moves more languorously than it does in other parts of the world.

Time doesn't move languorously in Newell's adaptation; it drops off into so many narcoleptic naps that it barely stirs. The picture tries so hard to be lyrical, you're aware of every beat. Javier Bardem plays Florentino Ariza, the loyal lover: Bardem skims through this interminable movie with a surprising degree of grace, balancing the character's lovesickness with his almost comically healthy libido. (Florentino may be loyal to his lady love, but he sure doesn't save himself for her.) Bardem has a good face for period roles: There's something defiantly uncontemporary about that broad, noble brow, and he's easy to watch here. The striking, noble-looking Giovanna Mezzogiorno is his beloved Fermina Urbino. (The actress bears an uncanny resemblance to the young Debra Winger.) Benjamin Bratt is Dr. Juvenal Urbino, Fermina's husband, a mannered, moderately insufferable straight-arrow physician; Bratt struts through the role as if propped up by an invisible walking stick.

With "Love in the Time of Cholera," Newell -- whose last movie was the fine "Harry Potter and the Goblet of Fire" -- has somehow come up with a picture that's both florid and stiff. (The script is by Ronald Harwood, who has at least two terrific book adaptations to his credit: "The Pianist" and Julian Schnabel's upcoming "The Diving Bell and the Butterfly.") Even some very good actors get hung up on the aggressively curlicued dialogue. Liev Schreiber appears very briefly as the young Florentino's employer; trying to cheer up the heartbroken lad, he exclaims, "You need to take your mind off her -- come with me to the whorehouse!" He's so falsely robust that he appears to have wandered in from a community theater production of "H.M.S. Pinafore." John Leguizamo, as Fermina's social-climbing, toothpick-chewing papa, gives one of the weirdest performances I've seen all year; delivering his lines, he drifts in and out of near-incomprehensible Brandoese. Of all the supporting actors, Catalina Sandino Moreno, as Fermina's cousin Hildebranda, is the liveliest presence: You forget, momentarily, what a stinker you're watching while she's on-screen.

Shot by Affonso Beato (the cinematographer behind some pretty stunning-looking pictures, among them "The Queen" and "All About My Mother"), "Love in the Time of Cholera" does at least offer us some nice, crisp colors: It opens with a glimpse of a parrot whose feathers are a particularly vivid green, a shot that seemed like a promise of good things to come. But even though the movie looks pretty enough, it never feels hot, or even just warm. The closest it comes is a scene in which Benjamin Bratt's face just looks excessively shiny, as if it had just been spritzed with faux perspiration. Forget the heat of passion: The movie never breaks a sweat.