"Margot at the Wedding"

It's painful to watch a movie with characters that leave you cold -- but not as painful as seeing what's happened to Nicole Kidman's face. 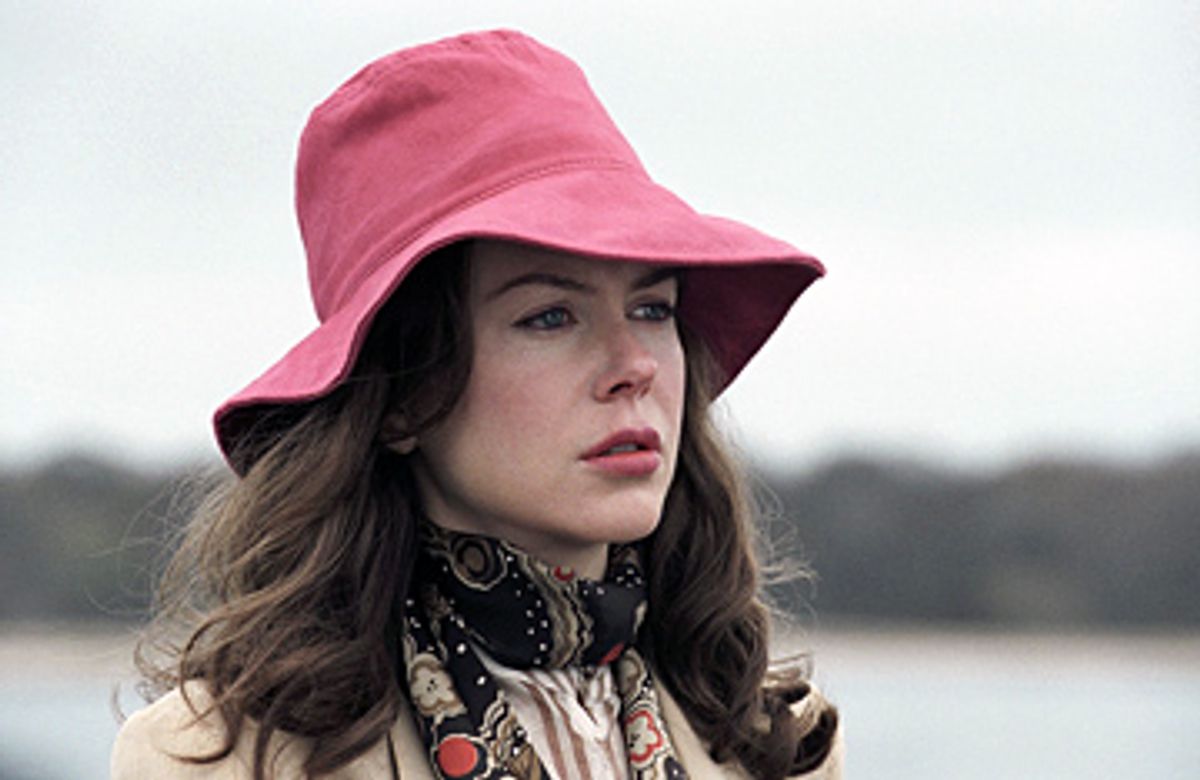 It's painful, in a way, to watch a movie and feel nothing for characters who are clearly begging for your acceptance and sympathy. In Noah Baumbach's "Margot at the Wedding," Nicole Kidman plays Margot Zeller, a successful New York fiction writer and extremely difficult person who sets out with her younger son, a sensible, thoughtful adolescent named Claude (Zane Pais), to attend the wedding of her sister, Pauline (Jennifer Jason Leigh), at the family home -- or might it be one of the family homes? -- on a New England island. During the trip -- the two travel by train and ferry, like good, urbane New Yorkers -- Margot babbles at Claude as if he were a miniature adult (which, in a way, he is), airing her venomous thoughts about the allegedly crazy Pauline (even though, in the movie's early minutes, it becomes pretty clear who the real crazy is) and making snotty pronouncements about the so-called loser guy she's marrying. (His name is Malcolm, and he's played by Jack Black.)

When we meet Pauline, she's possibly a little crazy, but mostly just eccentric in that specifically New Englandy, too much Boston Symphony Orchestra, not enough Red Sox way: She stomps around the family property in summer dresses with wool scarves swathed around her neck, the better to keep the chill out of her Pilgrim bones. She defends her unemployed fiancé in a whiny voice that sounds more like an indictment: "He'll spend up to a week writing a response to a music review. He's very smart." She pauses, pregnantly (and, as it turns out, she is): "Maybe too smart for his own good."

Malcolm isn't a bad guy -- at worst, he's just kind of a dorky windbag, maybe a bit lazy. But Margot has apparently shown up for this wedding (which is to take place in a few days on the grounds of the house) only to pick obsessively at Pauline. When she tires of that, she turns her passive-aggressive fury on her own son. She hollers at Claude when he fails to play croquet properly, and then, disgusted by her own mischanneled anger, stomps into the house: "This is why I hate games. I hate what it does to me." She uses Malcolm as a battering ram against Pauline: "He's not good enough for you. He's so coarse. He's like the guys we rejected in high school." And, in the movie's most wrenching scene (which is moving largely because of the way the young Pais underplays it), she cruelly criticizes Claude's changing body, then waves off the remark, erasing it blithely by saying, "It's OK, though."

These are the lost souls who wander through "Margot at the Wedding." They're real people with real problems, as you can tell by the couch in the family room, a big, saggy, squishy affair that calls out, "Look at how regular we are! Please don't judge us by the zillion-dollar waterfront property we're waltzing around on as we air our sad family secrets!" Baumbach has said of "Margot at the Wedding" that it isn't autobiographical, or even semi-, as he acknowledges his last picture, "The Squid and the Whale," was.

But while "The Squid and the Whale" felt remote and excessively clever, "Margot at the Wedding" is just remote. I watched it certain that Baumbach wants us to feel great sympathy for these characters, even for the extremely unlikable (and obviously crackers) Margot.

But I just couldn't feel anything. To put it bluntly, these mismatched siblings make their own psychological problems the center of their shrunken universe. The movie does hint darkly at family sexual abuse, and there are several references to another sister, Becky, whom we never see. "Becky got it the worst," one sister says. "Yeah, did she ever. Raped by the horse trainer," says the other. And the two dissolve into tra-la-la giggles at the absurdity of it all, as if nothing could be funnier than the fact that your sister was once raped.

It's bad enough that the movie is about uninteresting people's problems. What's worse is that it's about snobs, and Baumbach buys into their snobbery. All that's missing is train tracks on the Zellers' property to tell us that the clan next door is from the wrong side of them. That family is called "the Voglers"; the Zellers utter the name in the same tones you might use to speak of, say, the Cossacks. Their house is a little, run-down shack; they entertain themselves by hosting pig roasts outside; it's hinted that they abuse their kids (because, after all, isn't that what those people do?); they throw their garbage on the Zellers' property and complain about a tree whose roots have grown into their own property; and the Vogler boy, who's about Claude's age, is a bully and a biter who goes around without a shirt. The Zellers' inability to comprehend that the Voglers are people too is perhaps meant to be funny, a joke on them. But the Voglers are presented as morons with no manners -- they wind up being the movie's way of reassuring us that rich people may be messed up, but the unwashed masses aren't what they're cracked up to be, either. The attitude is superior at best and cheap and stupid at worst.

The movie, like that squishy Zeller couch, sure doesn't look expensive: It was shot by Harris Savides, in tasteful tones of mushroom and slate and moss. The whole thing looks a bit grainy and indistinct, because trying too hard would be crass, as if it were made by and for people who choose to wear threadbare chinos even though they can afford new ones, and who think it's bourgeois to dust. The performances are adequate; the actors do what the movie asks of them, though Leigh (Baumbach's wife, and often a wonderful actress) deserves a role that isn't so whiny.

Kidman is a nimble and sensitive performer, and it's clear she tackled this less-than-glamorous role pretty gingerly. But even though Kidman claims, in the current issue of Marie Claire, that she is "completely natural," there's no way around the question: What has she done to her face? The question of actors (men and women) and plastic surgery is a delicate one, but at this point, it's disingenuous to pretend not to notice any change. Kidman's skin is, without a doubt, beautiful. But it has turned into her greatest limitation, a boundary beyond which she can't stretch. In one scene, the camera lingers on her face (she's gotten herself into a situation that she can't get out of) and we're left to concentrate, for too long, on the great effort it takes her to furrow her brow. She finally comes up with something -- two smooth little bumps between her eyebrows -- but the effort it cost her just couldn't have been worth it. It's terrible that anyone should have to age in Hollywood, given the cruelty of the industry, and of human beings in general: There's no getting around the pressures that performers face. But more and more actresses are choosing beauty over expressiveness, as if the two were mutually exclusive. If only there were a way to make them see that they're mutilating not just their faces but their talent.