Judith Regan's lawsuit against News Corp. alleges that Rupert Murdoch's firm, which owns Fox News, wants Giuliani to be president. A look at links between the candidate and the company. 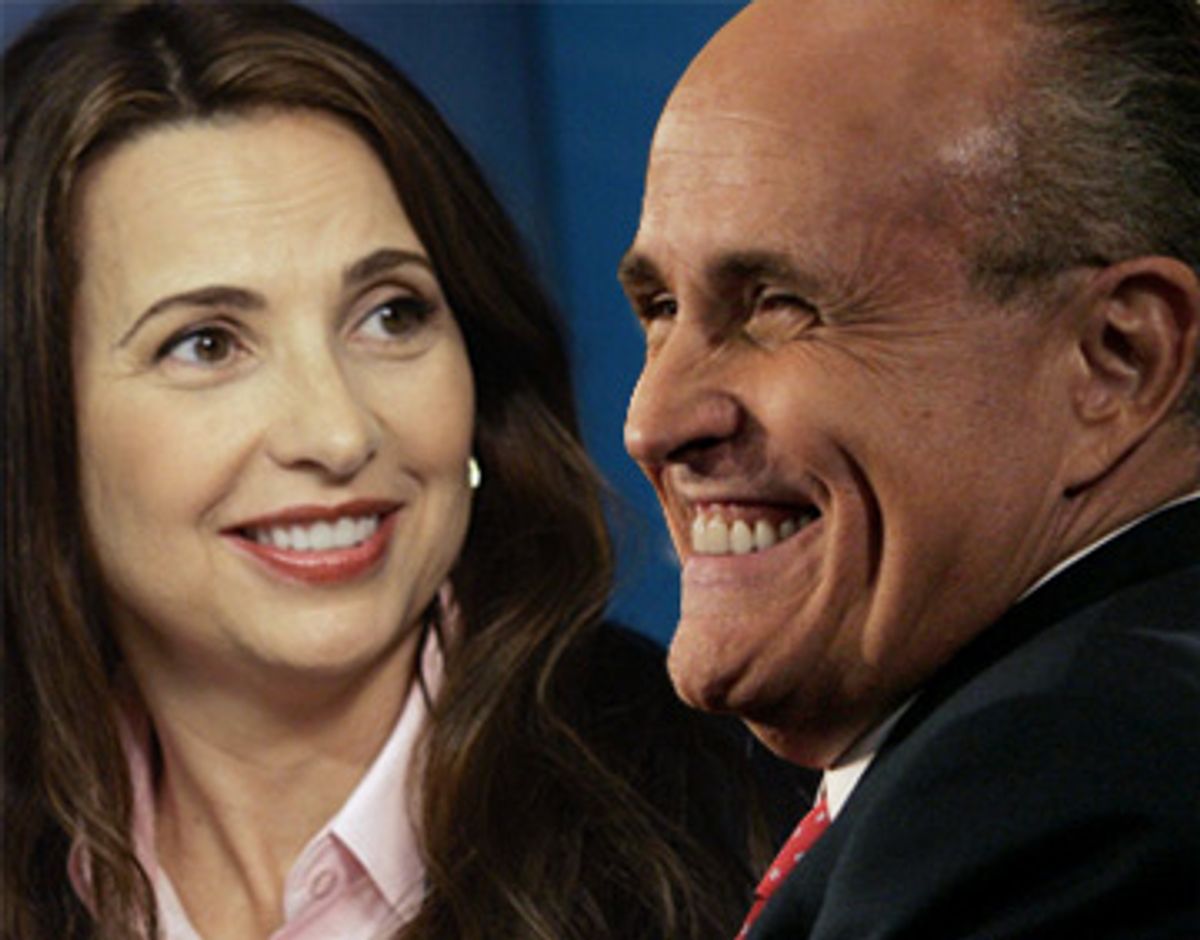 Of all the allegations contained in former ReganBooks Publisher Judith Regan's lawsuit against her one-time employers at Rupert Murdoch's News Corp., the most explosive is the first. Regan charges that News Corp. executives wanted to destroy her reputation because she knew too much about her ex-boyfriend, former New York City Police Commissioner Bernie Kerik, and that what she knew could be harmful to the presidential hopes of Rudy Giuliani -- whom she depicts as the preferred candidate of News Corp. and its subsidiary, Fox News. According to Regan's suit, "This smear campaign was necessary to advance News Corp.'s political agenda, which has long centered on protecting Rudy Giuliani's presidential ambitions."

Regan and the married Kerik had a well-publicized yearlong affair. Their assignations often took place in a lower Manhattan apartment that had been specifically reserved for the use of workers in the aftermath of 9/11. After Giuliani left the mayor's office on January 1, 2002, Kerik went to work for him as a consultant at Giuliani Partners. Kerik and Regan broke up later in 2002. In December 2004, according to Regan's complaint, when President Bush tapped Kerik, at Giuliani's recommendation, to head the federal Department of Homeland Security, Regan was pressured to keep quiet, and asked to lie on Kerik's behalf. "[A] senior executive in the News Corp. organization told Regan that he believed she had information about Kerik that, if disclosed, would harm Giuliani's presidential campaign. This executive advised Regan to lie to, and to withhold information from, investigators concerning Kerik. ... [D]efendants knew they would be protecting Giuliani if they could preemptively discredit her."

This is not the first time that News Corp. has been accused of having a political agenda. Fox News is often accused of favoring Republicans. In the current presidential election cycle, however, there have also been repeated suggestions, from critics on both the right and the left, that the network prefers Giuliani over the other GOP contenders.

As it happens, Giuliani and News Corp. do have a history. Giuliani has several personal and financial connections to News Corp. and Fox News -- beginning with Fox's top executive -- and those connections seem to have proven mutually beneficial:

Roger Ailes: The head of Fox News, Ailes was a veteran Republican operative long before he was a news executive, having worked as a media consultant in the presidential campaigns of Richard Nixon, Ronald Reagan and the first President Bush. In 1989, he worked as a media consultant on the unsuccessful first mayoral campaign of a former federal prosecutor named Rudy Giuliani, with whom he had bonded at dinner parties over their shared admiration for Ronald Reagan. Since then, Giuliani and Ailes have remained good friends. Giuliani officiated at Ailes' wedding and brought presents to Ailes' room when Ailes was hospitalized in 1998. The New York Times has reported that aides to the two men say they don't see each other often, but they did sit together at the White House Correspondents' Dinner in April 2007 -- which Giuliani attended as a guest of News Corp. (Ailes has also socialized with Bernie Kerik.)

The Time Warner lawsuit: In 1994, according to the New York Times, Giuliani prepared a speech for a reception honoring Ailes in which he wrote, "Roger has played an important role in my own career." In 1996, Giuliani had an opportunity to repay the favor. Fox News was launching, with Ailes at the helm, and Time Warner, which provided cable service to 12 million homes nationwide, had decided it would not carry Fox News. Time Warner was the dominant cable operator in New York City, meaning that not only would 1.1 million city homes not get Fox, but the fledgling network would go unseen by media powerbrokers in the nation's media capital.

Three days after Murdoch learned of Time Warner's decision, a call from Ailes to Giuliani set in motion a series of unprecedented moves in favor of a cable network by the Giuliani administration. As calls and meetings continued between Fox and city officials, including Giuliani, the Giuliani administration reportedly threatened Time Warner executives with the loss of their cable franchise if the cable provider didn't accept a deal in which the city would give up one of its own government channels so Fox News could take the slot. (Some 30 other cable networks had tried and failed to win channel space on Time Warner.) When Time Warner refused to take the deal, the city announced that it would go ahead with the plan anyway and force the cable provider to carry Fox News. A legal battle ensued.

Ultimately, the two warring parties made peace and Fox won carriage, but not before a judge and an appeals panel both ruled against the city's plan. In granting Time Warner a temporary injunction, a federal district court judge issued a harsh rebuke to the Giuliani administration, saying the city had repeatedly shifted the legal justifications for its stand, indicating that "the City does not believe its own positions." The judge further wrote, "The City's purpose in acting to compel Time Warner to give Fox one of its commercial channels was to reward a friend... The very fact that the City chose Fox News out of all other news programs -- not to mention the significant number of other programs which have been denied space on Time Warner's commercial network -- is by itself substantial evidence that the City chose Fox News based on its content."

Lobbying: Giuliani's connections to News Corp. extend to his law and lobbying firm, Bracewell & Giuliani. Giuliani announced his partnership in the firm previously known as Bracewell & Patterson in March 2005. Beginning the next month, according to congressional lobbying disclosure records, the firm billed News Corp. and DirecTV, which was then a subsidiary of News Corp., for $120,000 in federal lobbying during 2005. The firm represented News Corp. on issues including regulations on violent and indecent programming and the potential re-write of the 1996 Telecommunications Act. In the years prior to Giuliani joining the firm, congressional records do not show any lobbying work performed for News Corp.

Airtime: Earlier this year, a study by the political journal Hotline found that Giuliani had been interviewed on Fox News during the first 196 days of 2007 for a total of 115 minutes, more than any other presidential contender, and 14 minutes more than the runner-up, the then-undeclared Fred Thompson.

Sean Hannity: In Fox's defense, the bulk of the time Giuliani was on the network he was talking to Sean Hannity, the Long Island-bred cohost of "Hannity & Colmes." And no wonder -- though Hannity claims not to be supporting a candidate (a denial he was forced to make when Ariz. Sen. John McCain accused him on-air, albeit obliquely, of supporting Giuliani), he flew to Ohio to introduce the former mayor at a campaign fundraiser in August. When a New York Times reporter asked a Fox spokeswoman about the Hotline figures, she responded that Hannity makes his own booking decisions. Hannity has also handled post-debate anchor duties for all three Fox GOP debates held to date.

Cease-and-desist: In October, Fox lawyers sent a cease and desist letter to John McCain's campaign after he included footage from Fox's October 21 Orlando debate in a TV commercial. The ad featured a McCain quip aimed at Senator Clinton's push for a so-called "Woodstock museum." The letter demanded McCain pull the ad and remove footage of the debate from his Web site, according to Talking Points Memo.

However, similar letters were not sent to two other GOP presidential hopefuls who were also using footage from the Fox debate -- Rudy Giuliani and Mitt Romney. After initial reports showed that only McCain had been sent such an order, a Fox spokesperson told the New York Times, "Our legal team has been alerted and there will be cease and desist orders." Letters were sent to both the Romney and Giuliani campaigns, but they are apparently not being heeded. Giuliani's Web site still makes liberal use of Fox footage, including one clip added at least a week after the date of the cease and desist letter. Romney's site also continues to feature material from the debate.

Steve Forbes: Himself a former Republican presidential candidate, the magazine magnate is now a national co-chair and senior policy advisor with the Giuliani campaign. He's also, in the words of a Giuliani campaign press release, "a frequent business commentator for Fox News Channel's 'Forbes on Fox.'" Though that show is actually hosted by a Fox News employee, David Asman, its guests come from the editorial staff of Forbes Magazine. Steve Forbes is both the editor-in-chief of Forbes Magazine and the president and CEO of its publisher, Forbes, Inc.

Erin Renzas is an editorial fellow at Salon.