Last week 58,000 gallons of oil spilled into the San Francisco Bay. It could not have come at a worse time for the million birds stopping to rest on their journey south. 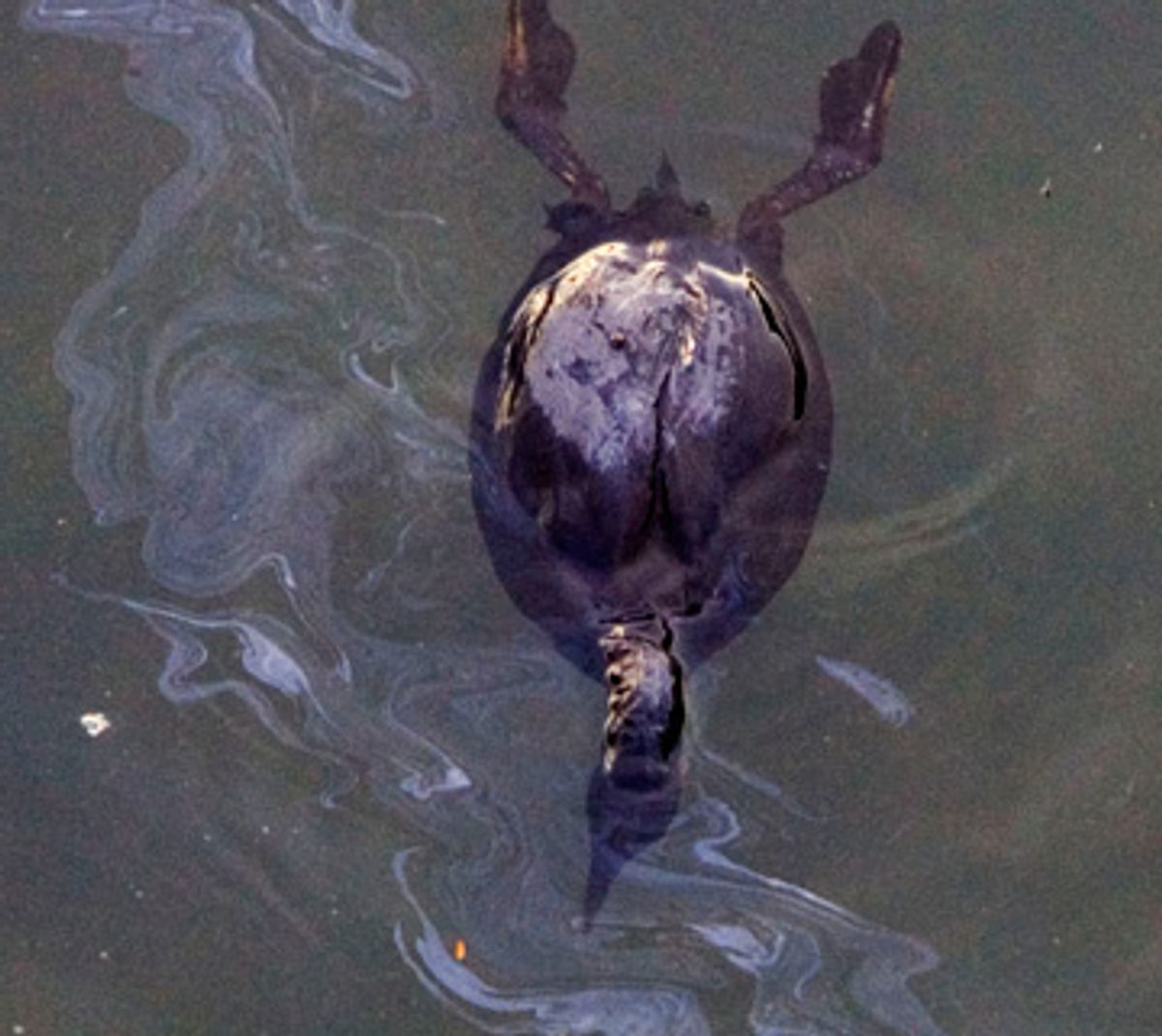 Every fall millions of birds fly south from their summer breeding homes in Alaska's tundra and Canada's boreal forests, bound for the warm climes and plentiful food of South America. Along the way more than 1 million stop, sometimes for the entire winter, in the San Francisco Bay, the largest estuary on the West Coast. This year the birds, some of them not a year old, alighted on the bay, weakened from their long flight, aiming to feed and rest for the long journey ahead, only to find that their sanctuary had become a toxic-tainted stew. On Nov. 8, a container ship, due to a navigation screw-up, struck a base of the Bay Bridge and dumped 58,000 gallons of fuel oil, a sludgy mix of kerosene, jet fuel and diesel fuel, into the bay. It could not have come at a worse time.

"Having the oil spill now is such a terrible shame because it means that many more birds are impacted than if the spill had happened even a month earlier," says Ellie Cohen, executive director of PRBO Conservation Science. Approximately 1,100 birds have been killed by the oil, but those are just the ones scooped up by an army of bird lovers spanning the bay and coastal shores with nets. Cohen estimates that 10,000 to 20,000 birds have already been affected, but only about 5 to 10 percent of them will ever be treated or their corpses recovered. "An oiled bird is probably eventually a dead bird," says Janet Hanson, executive director of the San Francisco Bay Bird Observatory. "It's tragic."

The oil spill is a reminder of the delicate balance between commerce and the environment in metropolitan America. Millions of residents, and tourists who take a day trip to Alcatraz, know and love the bay as one of the country's most beautiful places. But while enjoying the vistas, it's easy to forget that the bay also serves as a major industrial shipping channel, where thousands of hulking container ships bound for or returning from Asia pass under the Golden Gate Bridge every year. An oil spill that wipes out thousands of birds instantly exposes the upper hand of industry, but if there's any place in the nation where the environment strikes back just as quickly, it's San Francisco. When a trio of determined Berkeley women banded together in the 1960s to save the bay from further development, they launched the grassroots environmental movement in America. Their disciples are hard at work this afternoon.

A week after the spill, the rocky shoreline of the Berkeley Marina is cordoned off with yards of yellow tape advising "CAUTION," like a crime scene. Pink warning signs implore civilians to stay 50 feet from the water's edge, for their own health. Workers decked out in white jumpers and hard hats labor to clean up the scattered dredges of the toxic spill, which has washed ashore, as it has at so many other places around the bay, forcing emergency beach closures from San Francisco to Point Reyes, 30 miles north.

Nearby, the avian victims are rushed to a triage facility set up in the marina parking lot, where a makeshift sign on poster board says: "Oiled Birds Unload Here." Under a cypress tree, rangers from the National Park Service, wildlife officials from the California Department of Fish and Game and bird lovers from the Oiled Wildlife Care Network, chatter into cellphones and walkie-talkies, coordinating the rescue and transfer of oil-soaked birds, including scoters, grebes and cormorants. Volunteers drop by to bring donations of towels and sheets. The rescue operation all buzzes around a single white trailer, where the latest victims have been taken.

A pickup truck transporting five fresh patients pulls up to the triage center. Each bird is cloaked in the kind of cardboard box that a pet owner would use to carry a small dog or cat to the vet. "Any dead?" asks an official in a U.S. Fish and Wildlife uniform, accepting the handoff of a box bearing a bird inside. "No, the dead ones are in already," comes the terse reply, as the transfer is made.

Over the past week, hundreds of birds, their feathers coated in oil, facing hypothermia, dehydration and starvation, have been rushed here to be stabilized by vet techs with the Oiled Wildlife Care Network. Many hundreds of other survivors, tarnished with oil but well enough to swim and fly, elude the rescuers grasp. The bird rehabilitators can only hope that the victims of the spill that evade treatment will survive the oil's toxic effects until the next molt. They're not optimistic.

Healthy feathers act as insulation, allowing waterfowl to splash in chilling waters of 50 degrees, but when coated with oil, that insulation evaporates, putting the birds at risk of hypothermia. "When they get oil on their feathers, it's like you getting into the Pacific Ocean and unzipping your wet suit," says John Sutton, a lieutenant with the California Department of Fish and Game. Seeking to get warm, the chilled, oiled birds go ashore. Ill-equipped to forage for food on shore, they're at risk of dehydration and starvation. Preening to attempt to remove the oil can only compound the hazard, exposing the birds' digestive system to the toxins. "This spill is definitely going to take a heavy toll. It's going to kill a lot of birds for sure," says Gary Langham, director of bird conservation for Audubon California.

In a trailer set up at the triage center, the tainted birds have their temperatures taken, receive fluids and get warmed up. Afterward they are driven to the International Bird Rescue Research Center, about 40 minutes away, to be cleaned and rehabilitated. So far, rescue workers and volunteers have collected 950 live, oiled birds. Of those, 200 have been euthanized or died in care. Another 900 birds have been taken in dead on arrival. The dead and injured include a extraordinary array of waterfowl and shorebirds. They include common murres, Brandt's cormorants, pelagic cormorants, double-crested cormorants, rhinoceros auklets, brown pelicans, sanderlings, surf scoters, white-winged scoters, pintails, golden eyes, western sandpipers, black-bellied plovers, gulls, grebes, greater and lesser scaups, Pacific loons, common loons and red-throated loons.

Birds that do make it alive to the International Bird Rescue Research Center are given a physical exam and have an oiled feather removed to be used in any legal action against the ship owners or others responsible for the spill. "A feather for evidence," says Kirsten Gilardi, recovery and transportation coordinator for the Oiled Wildlife Care Network.

After rest and feeding, the birds are cleaned in a 45-minute procedure, involving Dawn dishwashing soap, before being meticulously rinsed and released to an outdoor pool to ascertain their seaworthiness, before being released back into the wild. Yet even the birds that are released don't all find a happy ending to their oily tale. Cohen cautions that some birds that are released may not survive long. Decades ago, she says, oiled birds that made it through rehabilitation didn't survive even seven days after release. Today, techniques for handling and cleaning the birds have improved, so hopes are high that those returned to the wild will fare better.

One thing is for certain: more birds are going to exposed, as just 12,000 gallons of the 58,000 have been cleaned up. "A lot of the fuel is now below the surface, and not on the beaches, and it's very hard to track where that is going to go," says Langham of Audubon California.

One of the species hit hardest by the spill is the surf scoter, a black, medium-sized diving sea duck. Some 78 percent of surf scoters in the Pacific Flyway winter in San Francisco Bay. Scoters are especially vulnerable to the oil spill because they spend their time bobbing up and down on the water's surface, taking deep dives to forage for food. That means they can be exposed to oil glistening on the surface or to the heavier, submerged fuel, which is harder to contain and clean up. "They spend a lot of time out on the water. They dive down through the water column to feed on mussels and crustaceans and other forms of life that are at the bottom of the bay," explains Elizabeth Murdock, executive director of Golden Gate Audubon. "When they do that they dive through the oil, and come back up through the oil." Scoters also hang out on the surface in rafts, or large groups, which means that a whole group can encounter a slick at once.

At Point Emery, not far from the Berkeley Marina, a raft of surf scoters bobs in the fading light near the shore's edge, which is still visibly tainted by oil. The shore's dotted with signs warning humans to stay away from the toxic water and beach. Yet there's no way to warn these scoters to stay away or prevent them from becoming the spill's next victims.