Shopping for a clean washing machine

Should you put your trust in the Energy Star rating when buying a a new appliance? 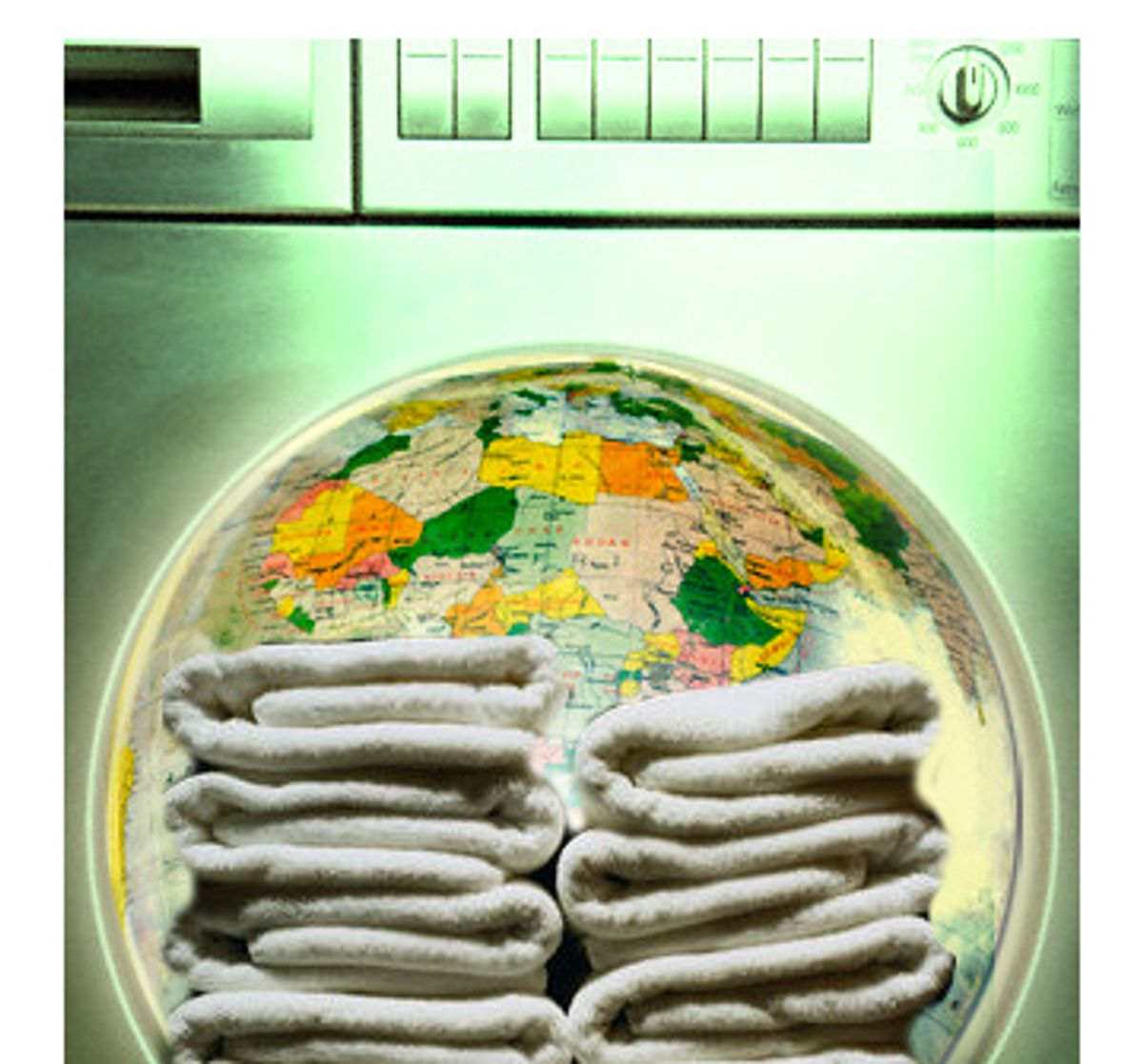 When I do the laundry at my house, the washing machine downstairs clanks and spins with such ferocity it sounds like a helicopter is hovering in my basement. The 1994 Roper model was here when I moved into the house last year, and I'm grateful for the hours it's saved me at the Laundromat. But compared with newer machines, my Roper hemorrhages water and electricity. Besides, I'm not sure it's been doing such a great job of getting my clothes clean. With winter here and my energy bills about to sprint upward, it's time to consider buying a new washer.

At the nearby Sears, shiny home appliances lined the rows with the promise of a Christmas season full of gleaming towels. Several featured a big blue tag, emblazoned with a star. These are Energy Star-certified machines. "These machines save more than water and power. They save you time because the washer spins quicker," said David, a veteran Sears salesman who, behind earnest glasses and a mustache, rattled off facts and figures. "Everything's good about these as far as the environment goes. They're less of a drain on our natural resources."

Created by the Environmental Protection Agency in the 1990s, Energy Star is intended to encourage consumers to purchase energy-efficient appliances that curb greenhouse gases. The Department of Energy sets a maximum limit for how much energy an appliance can use. Energy Star highlights manufacturers that voluntarily create more-efficient products. To earn the blue star, clothes washers must use 37 percent less energy, refrigerators 15 percent less, and dishwashers 41 percent less than the DOE limit. (Clothes dryers don't have an Energy Star certification because, according to the EPA, there is scant difference in energy use between models. Consumer Reports, however, says that not all dryers are created equal.)

Consumers across the country seem convinced. Between 2002 and 2006, 18 percent of those who bought a new appliance did so not because the old one was defunct but because they wanted to upgrade to something more energy efficient, according to a survey by the Association of Home Appliance Manufacturers. Such energy savings quickly add up. The average American family owns half a dozen major appliances, and U.S. manufacturers ship nearly 80 million major appliances annually. "Last year alone, Americans, with the help of Energy Star, saved $14 billion on their energy bills and reduced greenhouse gas emissions the equivalent to 25 million cars," says Maria Vargas, spokesperson for the EPA.

Today more than 1,400 manufacturers make Energy Star items, including appliances, computers, electronics and heating units. And most modern appliances, even those that aren't Energy Star, use less energy than my 13-year-old Roper. Across the board, clothes washers consume 39 percent less energy than they did in 1994, according to the American Home Manufacturers Association.

Some state governments offer incentives to lure people to buy Energy Star. Here in Oregon, if I buy an Energy Star appliance, I'll get a tax credit from the state and an additional $85 rebate from Energy Trust of Oregon, a nonprofit. Not all states follow suit. Check with your local utility or state energy office to learn what's offered in your area.

When it comes to price, Energy Star washing machines are, on average, $900, compared to approximately $400 for machines without the rating -- at least according to the major retailers I spoke to. That did give me pause. Should I spend twice as much for a green machine? But the DOE informed me that the average family (which does 392 loads of laundry per year) will recoup the expense of a high-efficiency washing machine within five years or less in utility bill savings.

I was sold. Then I peeled back the blue star and found that not all Energy Star appliances are created equal. Before January of this year, Energy Star ratings didn't consider water consumption. Certified washing machines must now use no more than eight gallons of water per cycle per cubic foot, a vast improvement; these machines use 35 to 50 percent less water than 2007 non-Energy Star models, according to the EPA.

However, certain Energy Star machines use more water than others. For example, the Whirlpool Cabrio uses an estimated 10,476 gallons of water per year, whereas an LG Electronics model uses about half the water. In large part, this is because the Cabrio is a top-loader and the LG Electronics model is a front-loader. In general, front-loaders use one-third the water of top-loaders because they clean clothes without needing to submerge the entire load. Though not rated separately by Energy Star, front-loaders are also more efficient because they spin clothes faster and wring them out more thoroughly, saving the dryer work.

"Because this was the first time they had set a water efficiency standard, I think they were pretty liberal about the standard to give manufacturers time to get up to speed," says Mark Connelly of Consumer Reports. Buyers who want more detailed information can go to the Energy Star Web site, which lists water and energy consumption for each of its certified appliances. Consumer Reports makes life even easier. Its Greener choices Web site gives grades for energy efficiency, water efficiency and washing performance.

There's an allegedly green (and cheaper) alternative, and that's buying a used, or, as they say in the car business, "previously owned" washing machine. I checked out Portland's Rebuilding Center, supposedly the country's largest nonprofit resource of used building materials. Back behind rows of old doors and windows, abandoned toilets and sinks, is Appliance Alley, where a hodgepodge of dust-coated dishwashers and washing machines sat waiting for a second life. Though dirty, none of these appliances is more than five years old, and they cost as little as $75. (Most used appliances sold at thrift stores across the country run around 40 percent less than the retail models at Sears, say recycling experts.)

Keeping old appliances out of the landfill is important, says Jennifer Jako of the Rebuilding Center. In 2000 alone, an estimated 41 million appliances died, according to the Appliance Recycling Information Center, an arm of the Home Appliance Manufacturers. "When you buy used appliances, you're saving an exponential amount of the energy that's used to manufacture these items in the first place," said Jako. "My husband and I have never bought a new car; why would we buy a new appliance?"

That makes sense. But while I own tools, I don't necessarily know how to use them. Buying a used appliance that might need repairs worries me. Furthermore, a standard washer from just 2004, even one that isn't Energy Star rated, uses, on average, 40 percent more water and almost 30 percent more energy than this year's models, according to the DOE. Plus, the Institute of Scrap Recycling Industries, a trade group, reports that around 84 percent of appliances can be completely recycled for their steel and iron, which makes me feel OK about ditching the old Roper.

So, at the end of the day, putting my trust in Energy Star, I have decided to buy a new front-loading washing machine. After all, what are credit cards for if not the promise of clean and guilt-free linen?