What's worse than watching your teams lose? Watching them win

Boston fans are experiencing one of the greatest runs in modern sports history -- and it's killing them. 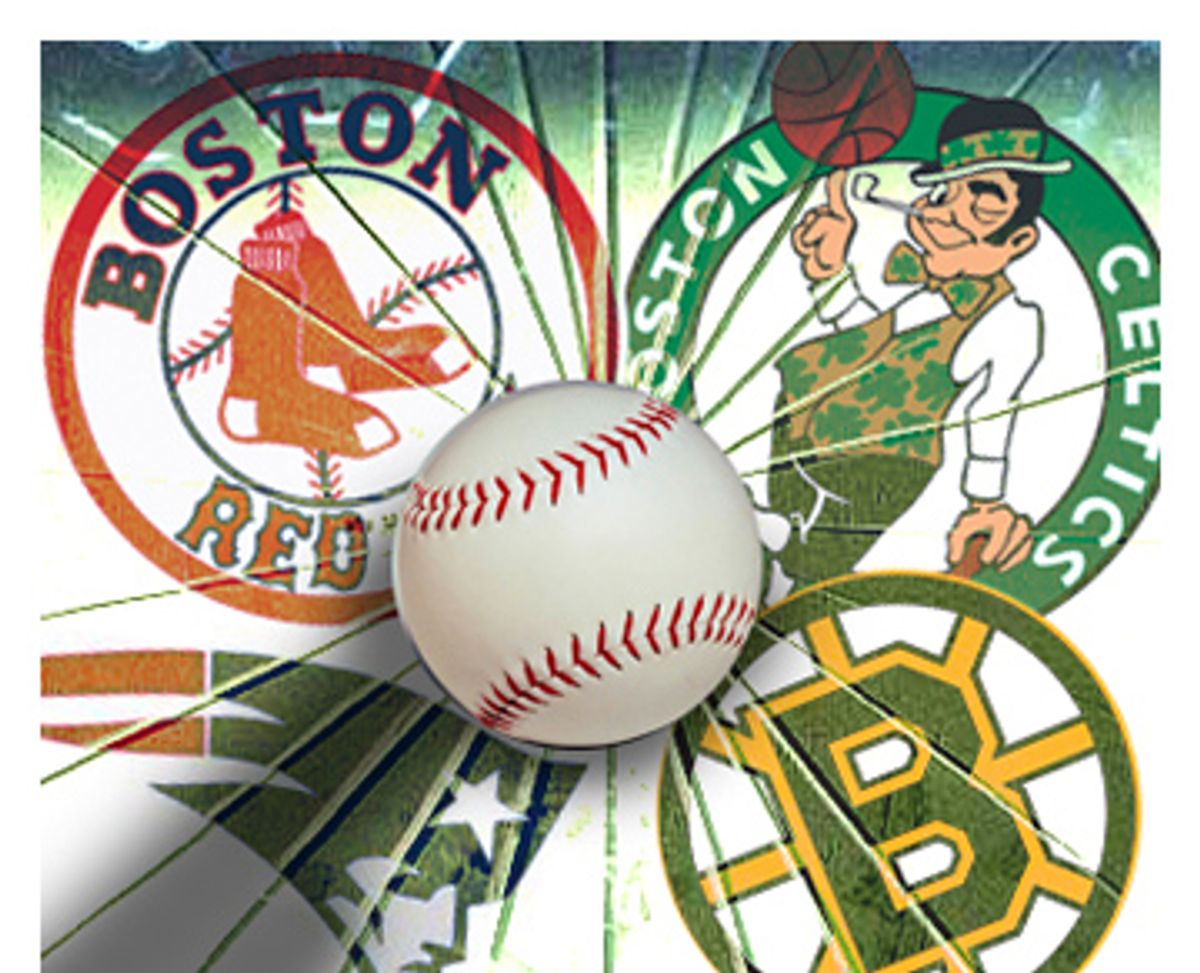 One of the first things I did when I moved to Boston a decade ago was take in a Red Sox game at Fenway Park. I'd borne a fairly senseless grudge against the Sox for years, but I'd heard Fenway was gorgeous and figured maybe it was time to make amends.

I purchased my ticket from one of the countless scalpers who once haunted Yawkey Way. For a mere 20 bucks over face value, he promised a prime location in the lower deck. He didn't mention the giant green girder I'd be sitting behind, but, hey, scalpees can't be choosers. I eventually moved to a seat that didn't require me to stand up every time the ball was hit out of the infield. It was a lovely day for baseball, too, though you wouldn't have known this from the fans around me. They spent most of the game raining insults down upon their players, who were busy getting trounced by the lowly Kansas City Royals.

On the way out, an older gentleman set his hand on the shoulder of the boy I presume was his grandson and said, "Don't worry, kid. I've been watching the Sox blow games for 60 years." His tone is what I remember, a kind of fatalistic glee: I have suffered this curse. And now so shall you.

It's in the nature of nearly all sports fans to suffer, of course. But the citizens of Red Sox Nation have elevated misery into a virtual raison d'être. For 86 years, their side went without a World Series -- and they never once shut up about it. Every defeat was immediately converted into a fresh station of the cross. (See Ruth, Babe; Dent, Bucky; Buckner, Bill; etc.) They were a walking, talking, squawking tribute to the exaltation of martyrdom.

Fans of the city's other pro franchises have never matched this transcendent self-pity. But they've found plenty to lament. Last season, for instance, Celtics devotees watched their once mighty franchise lose 18 straight games. The Patriots managed two Super Bowl appearances during the '80s and '90s -- and got stomped on both occasions. And the Bruins, well, as any angry puckhead will tell you, they haven't won a Stanley Cup since the sainted Bobby Orr skated for them, in 1972.

But these days, Boston fans are suffering a profound crisis of identity. They are winning, in a manner that is historically unprecedented. Last month, the Sox swept the Colorado Rockies to claim their second World Series in four years. The Patriots have become the NFL's 900-pound gorilla. They are 10-0 this season and being lauded as one of the greatest teams ever. Tom Brady, the team's dashing All-Pro quarterback, appears poised to shatter every gridiron record known to man. The Celtics -- after acquiring two all-stars in the off-season -- opened the season with eight straight wins, most of them routs, before losing Sunday night. Even the hapless Bruins have a winning record.

The effect on the local fanotariat has been paradoxical. They're not so much overjoyed as disoriented.

Take Matt, for example. Matt is the quintessential Red Sox fan: chronically pessimistic, and deeply attached to his unhappiness. He tapes every game that he can't watch live, and gets furious if anyone tells him the result. I've watched playoff matchups with the guy. It's something like attending to a colonoscopy patient.

Now that the Sox have replaced the Yankees as the official rich bullies of Major League Baseball, his enthusiasm has actually diminished. "I'll be honest," he told me, on the eve of the team's latest Series win. "It's just not the same as it used to be."

I got virtually the same response from Pete a week ago, after I congratulated him on yet another Celtics romp. "I miss Larry Bird and Kevin McHale," he said. "Those teams were really special."

"Wait a second," I said. "You've got an undefeated team right now."

Translation: I prefer nostalgia to contentment.

The most obvious sign of this waning passion comes from guys at my gym. It used to be that a gaggle of them would camp out in front of the racquetball courts and kvetch for hours about whichever team seemed to require their blandishments. These days, they just shrug at each other and head for the Nautilus machines. If they talk at all, it's about the price of home heating oil.

Winning has also taken a heavy toll on the local sports radio shows. These programs serve as the modern churches of fan grievance, a jockstrapped version of the dyspeptic political call-in shows further down the AM dial.

Now that the local teams are unbeatable, there's very little for the hosts and callers to discuss. And the desperation is beginning to show. Last week the most popular subject on WEEI (by far the biggest sports talk station in town) was the fact that the play-by-play announcer for the Boston College football team had missed a crucial interception because he'd run to the bathroom during a timeout.

It amounts to this: The psychic mechanisms of fandom are being laid bare here in Beantown. It's becoming clear that the unspoken allure of rooting for a team resides not in the conscious wish for success, but the unconscious wish for failure.

Most fans, after all, pursue their obsession not because their lives are so happy and well-adjusted, but because they lack a sense of vitality and connectedness. The willed helplessness of fandom -- our superstitions aside, there's really nothing we can do to control the fate of our teams -- implies a spiritual surrender. Frederick Exley described this condition precisely in his wrenching account of sports addiction, "A Fan's Notes": "Whatever it was, I gave myself up to the [New York] Giants utterly. The recompense I gained was the feeling of being alive."

My friend Rich, who is both a mental health professional and a Pats season-ticket holder, takes it a step further: "Most people get used to living within dysfunction. That's how sports fans are. They secretly need their teams to screw up."

This compulsion is simply more extreme in Boston. The fans here are more passionate and knowledgeable than fans in most other cities. By their own reckoning, this intense devotion grants them the right to whine.

There are specific reasons for this. The inherent fatalism of New Englanders, to begin with. The fact that they spend six months a year battling seasonal affective disorder. And, perhaps most painfully, the historic sense that they have been cast in the role of New York's bitch. (It's no coincidence that interest in the Pats skyrocketed after Bill Parcells left the team to coach the New York Jets.)

That said, New Englanders hardly have the franchise on deluded fanaticism. We all believe we're escaping our burdens by watching sports. But the act of rooting inevitably returns us to the disappointment and rage of our internal lives. Fandom isn't an emotional escape; it's a pressure valve. When our teams eventually lose (as they almost always do) we are granted a safe place to channel our primal negative emotions.

But when your teams win -- when all of them are suddenly, terrifyingly unbeatable -- you are left with a confusing dividend: the unwelcome realization that your life is no better than it was before. You are simply one more jock wannabe who sneaks off to a bar to worship physically gifted millionaires for a few hours, then returns home to the same dull and intractable problems.

Fortunately for me (sort of), I'm a long-life fan of the Oakland teams, which are all lousy right now. The delicious misery of my rooting carries on unabated. It's only magnified by living as an exile in Boston, where the fans remain largely insufferable, having evolved from angry and unforgiving to smug and unforgiving.

But I will admit that it's been fun to watch my friends struggle to contend with so much unbearable prosperity. After years of joyous complaint, the Boston faithful are getting precisely what they deserve.