Bush's nominee to head the Department of Veterans Affairs is the second to come from a private company that rakes in millions from VA contracts. 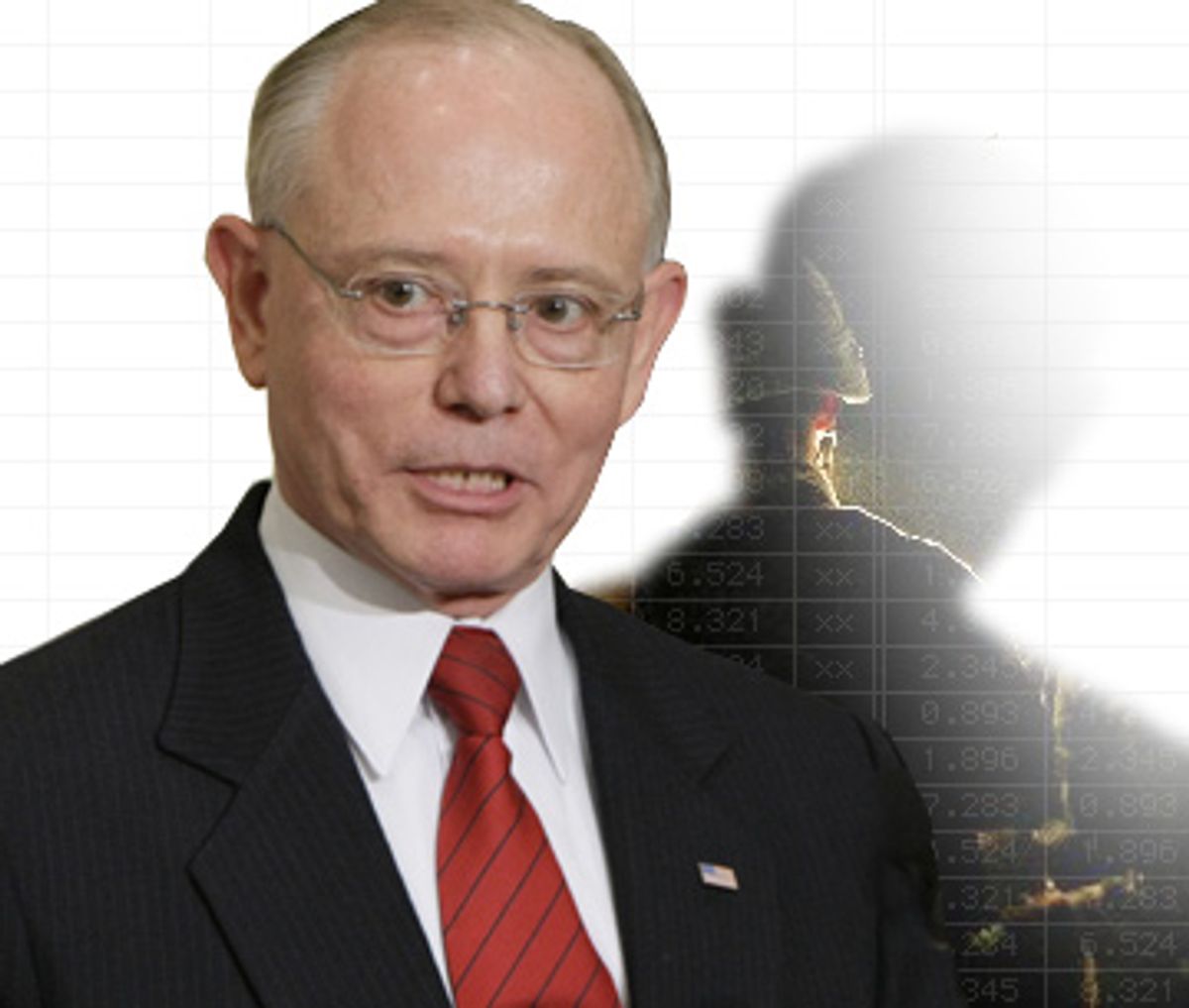 President Bush late last month nominated retired Lt. Gen. James Peake to be the next secretary of the Department of Veterans Affairs. It is not an inconsequential wartime post: The department is the second-largest government agency after the Defense Department. And the VA faces the awesome responsibility of caring for several generations of veterans, including the crush of American service members back from Iraq and Afghanistan.

On paper, Peake seems qualified. Wounded twice in Vietnam, he retired in 2004 from his post as Army surgeon general, the Army's top medical officer, with 40 years of experience in the field of military medicine.

But Bush plucked Peake directly from a private company that has raked in hundreds of millions of dollars from contracts with the VA -- and Peake himself helped develop proposals for the company to contract with the VA. That has raised questions about conflict of interest, potentially pitting veterans' care against corporate profits. Moreover, if he is confirmed, Peake will be the second head of the VA under the Bush administration to come from that same private contractor, QTC Management Inc.

Observers say QTC Management has performed high-quality work, and its former president, who also headed the VA under Bush, withstood past scrutiny by congressional investigators. But ever since Dick Cheney left Halliburton to become vice president, Bush administration critics have sounded the alarm about war profiteering seeping into the heart of the U.S. government. The changing leadership at the VA represents a little-known turn of the revolving door between contractors and the Bush administration. Veterans' advocates also worry that Peake's nomination suggests the White House may be interested in privatizing veterans' healthcare to an unhealthy degree.

The Veterans Affairs Department runs more than a thousand hospitals and outpatient clinics to care for veterans, including the influx of hundreds of thousands of veterans who served in Iraq and Afghanistan and are now out of the military and want to see a VA doctor.

Those veterans also seek disability checks as remuneration for their service-related ills. Every year the VA hands out over $40 billion in checks to veterans as compensation for everything from missing limbs to post-traumatic stress disorder.

When a veteran first applies for that compensation, a doctor conducts a physical to help determine how much money he or she deserves. Historically, VA doctors do most of those examinations. But increasingly they are being performed by QTC Management, the for-profit contractor that employed Peake as its chief operating officer from 2006 until now.

The company has a virtual lock on the expanding business of performing the physicals on veterans, which help determine how much they should get in disability checks from the VA. The company first started conducting the examinations in the late 1990s, part of a smaller effort to help the department alleviate a backlog of veterans awaiting benefits. This year the VA will farm out 100,000 to 150,000 of these examinations to QTC Management, according to the company's chairman. A 2005 report from the VA's inspector general says the company charges around $590 for each exam, making the contracts worth at least $88 million this year alone.

The first VA chief selected by Bush to come directly from QTC Management was Anthony Principi, then president of the company, who served as VA secretary from 2001 until 2005. During those years, the company reportedly hauled in hundreds of millions of dollars conducting examinations for the VA.

And now Principi is back at QTC Management again, serving as chairman of the board. (Before returning to QTC Management after serving at the VA, Principi did a stint at pharmaceutical giant Pfizer and was a commissioner on a panel studying the closure of military bases.)

That the revolving door has come full circle in Principi's case deepens suspicions among veterans' advocates. "It is a little bit troublesome that a company may be a farm team for the VA," said Paul Rieckhoff, executive director of Iraq and Afghanistan Veterans of America. "I want to know why [Peake] and Principi both came from there," Rieckoff said. "I want to know how directly they are involved in VA contracts."

Rieckoff also wondered: "If you are bringing people from the private sector, is that because you feel they are going to bring a greater level of efficiency -- or is it because you want to move toward privatizing care?"

When a veteran walks in the door to see a doctor, the focus should be on the veteran and not the bottom line, said Paul Sullivan, executive director of Veterans for Common Sense, who until March 2006 was a project manager at the VA in charge of data on returning veterans. "The veteran absolutely must come first, and with QTC, profits come first and that is wrong," said Sullivan. "We do not want a Blackwater getting anywhere near our veterans," he said, referring to the notorious private security firm that operated with no clear accountability in Iraq.

In a telephone interview with Salon, Principi, the former VA secretary and current QTC chairman, argued that the company is not providing healthcare, since the medical examinations conducted by his company help determine how much each veteran should get in disability payments. "I am personally and philosophically opposed to the privatization of VA healthcare," he told Salon. "QTC does no treatment," he said. "We do a medical disability evaluation. I distinguish that from the treatment and the care that VA provides."

And Principi said he has gone to great lengths to minimize any perception of a conflict of interest in going from the company to the VA and then back again. He said he recused himself from any issues involving QTC Management while he was in charge of the VA. And although government ethics rules say he is allowed to contact the VA on business one year after leaving the government, Principi said he continues to steer clear. "I try to avoid an appearance of a conflict of interest. I have not stepped foot inside the VA on business-related matters since I was secretary," he said. "I have not engaged in any lobbying phone calls. I have not directly or indirectly tried to be involved in that."

Principi said Peake, the former Army surgeon general, also did not engage in direct lobbying of the government to bring in cash for the company. However, Peake did help the company develop proposals to do work for the VA, Principi acknowledged. "Jim would have the team work on the proposal and make sure it was a good proposal and make sure all the i's were dotted and the t's were crossed, and that the technical proposal looked good, and it read well, and the pricing was good," Principi explained. "He didn't go lobby the VA or anything." (QTC Management may have had that ground covered without Peake: Disclosure records show QTC Management paid Jefferson Consulting Group, a lobbying firm, $20,000 in 2003.)

Principi's behavior has been above board, according to a 2006 congressional investigation. In April 2006, the Los Angeles Times reported that the company collected $246 million from the VA while Principi was secretary, and that the company's contracts with the VA could eventually be worth $1 billion. The House Committee on Government Reform subsequently launched an investigation. California Rep. Henry Waxman, then the committee's ranking member, wrote the VA on June 9, 2006, that he was "satisfied that Secretary Principi's actions were proper and ethical."

And QTC Management has performed well, according to Joseph Violante, national legislative director of Disabled American Veterans. "According to our service officers out in the field, they feel that QTC does a much better job than VA," he said. "They do more thorough exams and they do them properly."

But the cross-pollination between the company and the VA still creates the perception of a conflict of interest and raises questions about proper government oversight, said Dina Rasor, author of "Betraying Our Troops: The Destructive Results of Privatizing War." Rasor said veterans worried about privatizing VA healthcare probably do have something to fear, since all of the Blackwater contractors careening around Baghdad in SUVs are a testament to the Bush administration's zeal for privatization, even while oversight and accountability are lacking. "This administration, besides the cronyism, they have this ideologue thing that government is bad and privatization is good," she explained. "They take it to the absurd."

Rieckhoff, the veterans' advocate, said Congress needs to take a very close look at the Peake nomination. Congress should make sure the contracting issues are kosher and that privatization of veterans' healthcare is not looming on the horizon. "Those are all legitimate questions," he said. "This is the part of his record that I think really needs to be explored during these Senate confirmation hearings."