In this interview and podcast, the director discusses his astonishing new film, "I'm Not There," and that elusive shape-shifter, Bob Dylan. 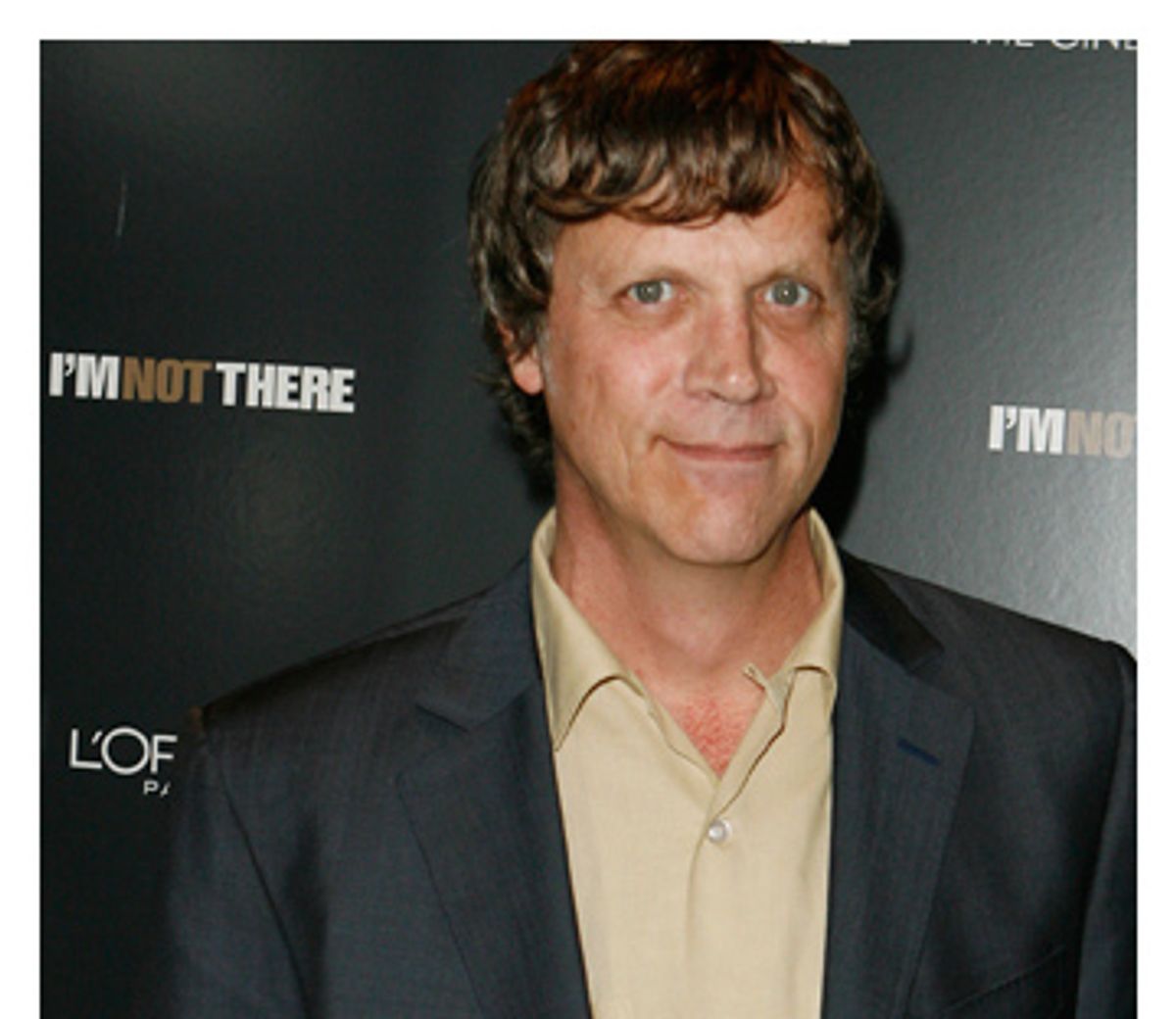 Anyone who has ever listened to even three or four random Bob Dylan records knows that the mythical creature we call Dylan couldn't possibly be just one person. So in the ambitious and extraordinary "I'm Not There" -- not a biopic but a dream-world meditation on the idea of Dylan -- Todd Haynes has cast six actors, each of whom plays a different vision of the performer we all only think we know. Among them are Christian Bale, the earnest, righteous protest singer; Ben Whishaw, the mischievous poet who seems to have been whisked in from another era; Marcus Carl Franklin, the 11-year-old drifter who idolizes Woody Guthrie; and, in one of the finest performances of her career to date, Cate Blanchett, the neurotic, sexually charismatic performer who, circa 1965-1966, was only just beginning to realize that the people who claimed to love him so much were also capable of tearing him apart.

With "I'm Not There" (the title says it all) Haynes celebrates Dylan's elusiveness, his refusal to fit into the neat little boxes we try to cram him into. I spoke with Haynes in Toronto in September, where he talked about Dylan as a shape-shifter, a mischief-maker and a perennial source of astonishment. (Listen to a podcast of my interview with Haynes here -- and click here to read my full review of "I'm Not There.")

The idea of Bob Dylan is so outsized that when people talk about him they generally break him down into periods -- "The Freewheelin' Bob Dylan" Bob Dylan, the "Blood on the Tracks" Bob Dylan. And what you've done is broken him into different people, which is such a brilliantly simple idea that I can't believe no one has done it before. How did this idea evolve?

It was just plain on the page. When you really decide to look at the biographies and the accounts of him in the '60s, if you just read a few of them, they all line up in that idea. And you hear testimony of people saying that they hung out with him in August of '63, and then in November of '63 he was a different person. Like he had shape-shifted right in front of their eyes.

And you can hear it in the records, and you can see it much more clearly in these radical breaks, like when he plugged in electric [at the 1965 Newport Folk Festival], or when he became a born-again Christian, or when he had his motorcycle crash and ducked out into the woods for several years. But it felt like the only way to really get to some core truths about this fascinating guy.

As you know, there are a lot of people who are constantly trying to get to that truth, kind of scrabbling at it. There are people who really burrow into Dylan lyrics, thinking, "All the secrets must be in the songs!" And who's that guy who went through his garbage? Like, "The truth will be found in the garbage!"

But then on the other end of the spectrum you have people like Greil Marcus, who realize that the music is finite, it doesn't change, but the context around it is changing constantly. That's kind of the approach that I saw coming through in your movie. The music is the anchor, and everything else is moving around it.

Yeah, the characters are totally committed to their moment, and their ideas, and the world they're in. And the songs they produce are the total and complete products of that commitment. And yet they are completely in dispute with the other selves and the other songs around them. So there's a kind of dialogue going on internally between all of these absolute and total commitments to an idea or a position or a moment.

But the thing is too, what's so crazy about Dylan today is, that he'll go out and take these songs that are absolutely true to their time, perhaps, and to their inspiration and their moment, and he will reinvent the way they sound. So even the associations that you bring to them, and the desire to preserve something and keep something intact, are once again destroyed by him. Because he needs to be invigorated and break out of the Bob Dylanness of himself -- break out of the fixedness that everybody wants to attach to him.

I also think the thing about identity that's so interesting is that we strive to be affirmed somehow by identifying with something else. We strive to be rewarded -- it's like our own completeness is rewarded by identifying with somebody else's completeness. And Dylan is such a strong presence and voice and articulator that a whole generation, and more, have sought that from him.

But he so refuses to give that completeness back. And it only makes the desire for it all the stronger. I posit in the movie that that's what freedom is. Freedom isn't about being fixed, about finding out who you really are and staying put your whole life, finding out that you have a stable self, a completely cohesive being or something. No, we're always shifting and changing and adjusting and altering who we are, all the time. It's a constant state of creation. And Dylan makes that a life practice. He makes that whole idea of rejecting fixity, of rejecting holism, a gorgeous life work. And it's something that throws that whole idea of identity out the window. But at the same time he so frustrates the desire for that [identity] that it keeps regenerating itself.

And, oh man, those Dylan guys!

You go to parties with these guys and they stand around and talk about bootlegs all night, and catalog numbers, and what he was doing on Jan. 14, 1963.

I always wonder, with all that information in their heads, do they have any room for the music?

Exactly. And how opposite that is from him, the person they love and fetishize so completely.

I felt so exhilarated watching this movie, beginning with the credit sequence. Some of Dylan's music is very serious, and people approach it very reverently. But watching that opening, I remembered there's so much joy and pleasure to be had in this music. He plays around a lot. He's always goofing around -- not even just wordplay.

Oh my God, totally. There's a mischievousness, and there's incredible wit and humor. I don't think he thinks of himself as some intensely serious guy who's really heavy and should be analyzed and contemplated, and so highly regarded every step he takes.

I really think that that humor is just something that has been so evident from the very first record, with the talking blues songs that are so witty and funny, to the most recent recordings, where it's a whole other Dylan. It's this droll old man, with these wisecracks.

[Laughs] Exactly! But that's been consistent through his entire career. To me, that's a testament to his brilliance and his intelligence -- his ability to play around and goof around, to be able to throw things up in the air and see how they fall.

Of course, he's had his moments of intense seriousness and righteousness. I kind of put those together in the character of the Christian Bale story, [where there's] this kind of intense commitment to a sort of doctrine, whether it's that of the New Left in the folk era, or that of the born-again Christian in his Christian period, where all of a sudden he had the answer. And he was going to tell us what it was, as beautifully and passionately and emotively as he knew how. In both cases, amazing music came out of those convictions. There was a fixity, there was a righteousness, there was a lack of humor to both those periods of music. But they were very specifically lived. They do not cast oppressive shadows across his career. They were things he went right into, and then right out of.

It struck me that you've chosen one of the most beautiful actresses we've got to play Dylan in the period when he was the most beautiful. I look at him from that period -- '65, '66 -- and he's such a brat. There's a part of me that resists him. I think, Can't you just be a little bit nicer? You don't always have to be an asshole. But, given the chance to sleep with him at the time, I would have. I know millions of people have felt that way. Obviously, you knew you wanted different people to play Dylan. Was there ever a point where you just decided you wanted to cast a beautiful woman?

I do think he's beautiful at that period. But I was really more after the strangeness of what he had become as a man at that moment. How he was androgynous, but not in the way David Bowie would be androgynous a few years later, in the early '70s. It was almost more the way Patti Smith was androgynous. He was just this otherworldly creature. This otherness had crept into him completely by that point.

It's not like he is in [the 1965 D.A. Pennebaker documentary] "Don't Look Back." It had already progressed to this degree where he was really almost disturbingly skinny. And the hair was wildly outsized in proportion to the rest of his body. And his hands would just fly up in these crazy, fingernail-driven gestures while he'd play piano and talk, and how he was just fidgeting. And I was thinking, What would that have possibly been like to an audience in 1965, '66 -- when the Beatles were still sweet, and little Munchkins, you know? This guy was dangerous and fascinating and erotic but in a completely unsoft way. He also drew off the hostility and animosity that he'd generated by plugging in electric. It fueled him, and he struck back. The vengefulness of his feelings toward his audience, toward American culture and English culture, only seemed to propel him to do even more great songwriting and incredible recordings. That is just a moment that has become so canonized that I feel we've lost the shock value, and the genuine risk that it must have generated.

On a purely superficial level, I just wanted a woman's body to occupy that place, so that this strangeness could come back. But then Cate does something to it that takes it in so many more subtle and beautiful directions -- where you can really watch this character exist on-screen, for his humor, for his unpredictability, as a love object, as an artist. Just the layers of subtlety that she brings to it are so profound and so incredible.

And trusting you, too, because they had no sense how it was going to come together.

Yeah, and trusting a really difficult script that reflects the complexity of the structure [of the movie], without any of the fun of the fact that it's music-driven and has a rhythm. But you can't really get that on the page when I describe things so ornately, the way I do. The fact that it really came together this beautifully is miraculous.