Did Bush ask Scott McClellan to lie -- or didn't he?

Former press secretary Scott McClellan says someone in the Bush administration made him spread "false information" about Plame-gate to the press. Time for Congress to ask tough questions. 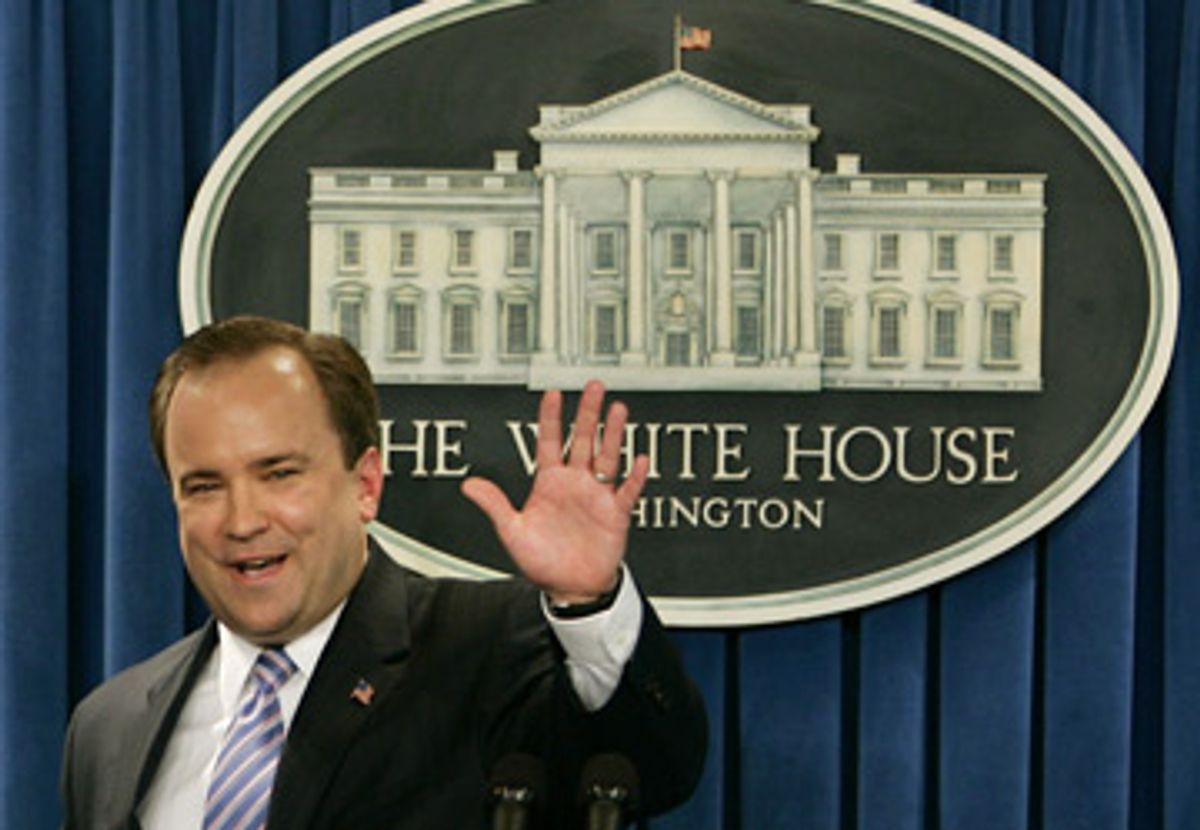 Scott McClellan, the former Bush press secretary famed for his robotic stylings, repetitive sophistry and rejection of candor, has at last turned on the powerful men who made him. Evidently he now claims to have grown weary of playing the patsy for their crimes and misdemeanors.

In a short, tantalizing excerpt from his forthcoming memoir posted on the Web site of Public Affairs Press, McClellan complains that he was duped into misleading the public and the media. Although the excerpt does not mention Valerie Plame, it clearly refers to her whispered exposure as a CIA agent by ranking aides to President Bush and Vice President Cheney:


The most powerful leader in the world had called upon me to speak on his behalf and help restore credibility he lost amid the failure to find weapons of mass destruction in Iraq. So I stood at the White house briefing room podium in front of the glare of the klieg lights for the better part of two weeks and publicly exonerated two of the senior-most aides in the White House: Karl Rove and Scooter Libby.

There was one problem. It was not true.

I had unknowingly passed along false information. And five of the highest ranking officials in the administration were involved in my doing so: Rove, Libby, the vice President, the President's chief of staff, and the President himself.

McClellan is not the first insider to try to escape disgrace by expressing disappointment, and presumably he won't be the last. All such tittle-tattle comes too late to restore the honor of the confessors or repair the damage done. His book, "What Happened: Inside the Bush White House and What's Wrong With Washington," proffers advice on government and politics that we probably can live without.

By press time today, he had called his own probity into question again, in fact, when his publisher partially retracted the incriminating excerpt in an interview with Bloomberg News. According to Peter Osnos of Public Affairs, McClellan didn't mean to say that Bush deliberately lied to him about Libby's and Rove's involvement in the Plame leak.

"[Bush] told him something that wasn't true, but the president didn't know it wasn't true," said Osnos. "The president told him what he thought to be the case." How McClellan knows what Bush knew at that time -- let alone how Osnos knows -- remains to be explained. (Perhaps the former press secretary would speak more clearly and less cutely under oath, as his predecessor did in the Plame grand jury.)

But despite this apparent stunt, McClellan's recollections have value because he reminds us of important business that Congress has yet to complete: namely, a full investigation of what Bush and Cheney knew about the outing of Plame, a veteran operative working to stop the spread of nuclear weapons, and whether they indeed ordered that reckless act.

Highly suggestive information about Cheney's role in the scandal has long been available in the public domain, which once encouraged speculation that he would be indicted by special counsel Patrick Fitzgerald. Plame was plainly a victim of Cheney's vendetta against her husband, former Ambassador Joe Wilson, who had protested the lies at the center of the president's argument for war against Iraq.

Yet Libby took the fall, leaving Fitzgerald bereft of sufficient evidence to prosecute the crime's suspected mastermind. After Libby was convicted and the president commuted his prison sentence, Bush declared that the case had "run its course" and that he no longer felt bound to find out what his subordinates had done and punish them, as he had initially promised.

The Libby commutation silenced the only potential stool pigeon who could implicate his bosses. Rove resigned without penalty, and Cheney sits in his office, mulling an attack on Iran. The Washington press corps, which had brought so little investigative energy to bear on the Plame case (except to speculate idly and stupidly about whether she was actually a covert officer), accepted Bush's facile closure. So did most members of the new Democratic Congress.

But the damning questions remain unanswered.

Those questions date back to McClellan's first remarks on the subject, when he famously said that the president would dismiss any official determined to be responsible for leaking Plame's identity. "If anyone in this administration was involved in it, they would no longer be in this administration. There's been nothing, absolutely nothing, brought to our attention to suggest any White House involvement." Sworn testimony eventually proved that the leakers included Libby, Rove, former Deputy Secretary of State Richard Armitage, and McClellan's predecessor, former press secretary Ari Fleischer. The same raft of evidence also indicated that Cheney orchestrated Libby's leak to New York Times reporter Judith Miller.

Not only did Cheney oversee the activities of his chief of staff, but he actually ordered McClellan to "clear" Libby in a press briefing on the case. A note in Cheney's own handwriting, explaining why he insisted that the White House press staff should defend Libby just as vigorously as Rove, was introduced as an exhibit at trial.

And that note, echoed in the excerpt from McClellan's book, implicated Bush in the coverup.

Cheney's furious scribbling said, "not going to protect one staffer + sacrifice the guy this Pres. asked to stick his head in the meat grinder because of the incompetence of others." The allusion to "incompetence" was a nasty dig at Rove, whom the vice president evidently blamed for the clumsy execution of their conspiracy. Though Cheney had crossed out the words "this Pres." and replaced them with the phrase "that was," his reference to Bush was both legible and incriminating.

What did Cheney mean when he wrote those words? Why did he write that "this Pres." had asked Libby to "stick his head in the meat grinder"? What did Bush know about the extent of the vice president's involvement? When did he discover what Cheney, Libby, Rove and Fleischer had done? Or was he in on the scheme from the beginning?

Several months ago I noted that both Congress and the press ought to ask the president and the vice president to release the transcripts of their interviews with Fitzgerald and his staff. Those documents remain highly relevant. The special prosecutor interviewed the president and the vice president during the summer of 2004, according to published reports. Even if Bush was not under oath during those sessions, to which he was accompanied by private counsel, both he and Cheney were still obligated by law to answer the prosecutor's questions honestly. It seems most unlikely that they did, if McClellan's accusation is to be believed.

Yesterday Sen. Chris Dodd, D-Conn., demanded that Attorney General Michael Mukasey immediately open a new investigation of the Plame case. Calling the book excerpt "very disturbing," Dodd said, "If in fact the President of the United of States knowingly instructed his chief spokesman to mislead the American people, there can be no more fundamental betrayal of the public trust."

To demonstrate his independence, Dodd added, the nation's new chief law enforcement officer must seek to "determine the facts of this case, the extent of any cover-up and determine what the President knew and when he knew it." He's right. So when will the rest of the Democrats -- and honest Republicans -- speak up?