The divine sound of silence

Britain's No Music Day offers a welcome hush over a noisy world. It can't come to America soon enough. 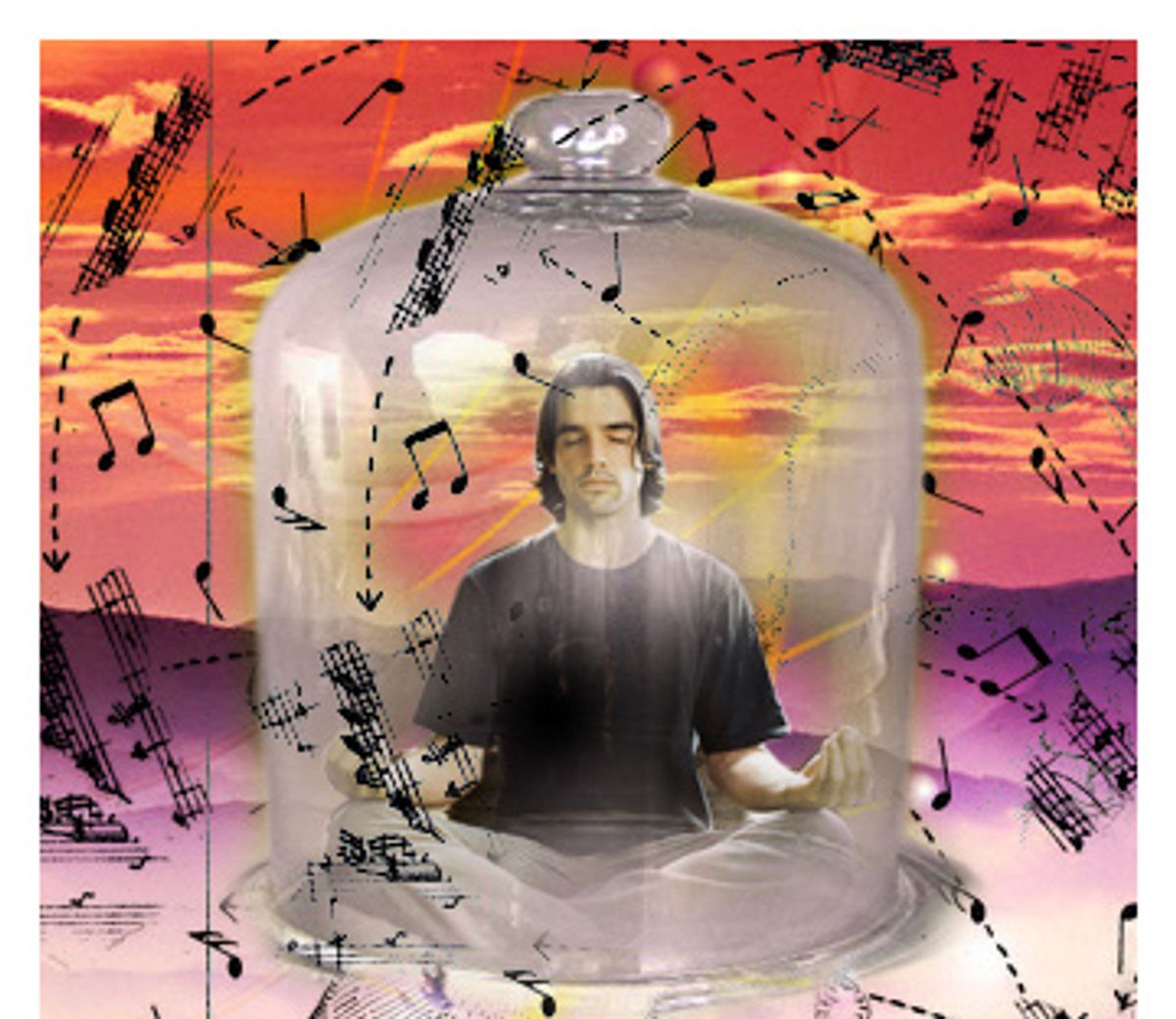 One can dream. What if no music blared from airports, supermarkets, bars, department stores or restaurants? Imagine being able to sit down in your neighborhood cafe and hear your friend talk without having to parse her words through the strains of "Sweet Child o' Mine." My god, that would be something for which to give thanks. On Nov. 21, a surprisingly wide swath of Britain honored "No Music Day." Radio stations, stores, recording studios and scores of music lovers took a laudable vow of musical silence. Should No Music Day come to America tomorrow, it wouldn't be soon enough.

The day of respite was cooked up by musician and conceptual artist Bill Drummond, best known as the mad genius at the controls of the KLF, British progenitors of ambient house music. As Drummond testified in the Guardian last year, his love of music had been rattled out of him by its ubiquity. "I decided I needed a day I could set aside to listen to no music whatsoever," he wrote. "Instead, I would be thinking about what I wanted and what I didn't want from music. Not to blindly -- or should that be deafly -- consume what was on offer. A day where I could develop ideas."

Not being able to hear yourself think, or feel, or escape "Hotel California," is indeed what makes music in public places a nightmare. Your poor senses are crushed every time you step out of the house. By hammering you with pop tunes before a movie, Cineplexes manage to kill your appetite for a film. And can't we just daydream in a market's fluorescent aisles, ruminate over whether we want to prepare salmon or ravioli tonight, without having to hear "once, twice, three times a lady"?

I love the Doors, Otis Redding, the Clash, Public Enemy, Lucinda Williams and Arcade Fire as much as the next music fan. But why do bars insist on pummeling us with their songs at the decibel levels of NHRA drag races? Bars are supposed to be an oasis from work and noise, places to sort out life in conversations with friends and lovers. I don't understand why bar owners insist on undermining their storied and welcome culture with eardrum-splintering music and now panoramic TVs playing "Mission Impossible II." These days, I gauge the sound level before deciding to sit down and have a drink. One blast of "Once I had a love and it was a gas" and I'm on to the next place.

In fact, I know why music is piped into bars, markets, restaurants, department stores and Jiffy Lube waiting rooms. It's based on pop psychology and pseudoscience spouted by marketing and advertising executives. As David Owen informed us in a nifty New Yorker article last year on Muzak, "The Soundtrack of Your Life," the company for 50 years was based on a trademarked concept called Stimulus Progression, which held that "most people really were happier and more productive when there was something humming along in the background." Elevator music probably earned its name from the soothing tunes piped into early skyscrapers, designed to calm people as they rode the claustrophobic new contraptions to top floors.

In the '90s, Muzak reinvented itself with a new philosophy called audio architecture. The company sold music in public places not as a tranquilizer but as a means to enhance the shopping experience, as the marketing jargon goes. As Alvin Collins, a founder of the concept, explained to Owen, he was creating "retail theater." Muzak wasn't about soothing music anymore. "It was about selling emotion -- about finding the soundtrack that would make this store or that restaurant feel like something, rather than just being an intellectual proposition." That's why you now can't escape the Cure in Urban Outfitters or the Gipsy Kings in any Mediterranean restaurant; both are trying to match their wares to the music their target audience supposedly likes. Whether or not a particular business is a client of Muzak's, they are driven by the same concept: Retail theater is all about consumption and music is a star of the show.

That leads to a deeper reason that music in public places gets under your skin. You hear songs that once lifted your spirits employed to sell you a computer. I don't see much difference between using music to make you feel good about a dining experience and using it to sell you a car on TV.

I can easily picture the bright and musically savvy employee who came up with the idea to use Nick Drake's "Pink Moon" to promote Volkswagen's new Cabrio model. Pull an esoteric song out of rock's demimonde to show off Volkswagen's coolness to its college-crowd target. I have never been more disheartened by the use of a song in a commercial, or the response to it.

Afterward, many, including Drake's sister, said the singer, who died in 1974, an apparent suicide, benefited from the commercial because it exposed millions of people to his music. That's a pretty specious defense. One of the most extraordinary qualities about Drake's sad and lovely folk music is that it has grown in popularity over the years by being passed between friends like a tender secret. The commercial did help the Drake estate sell records but at a terrible cost to "Pink Moon." The emotionally fragile song, whose central image is a haunting metaphor for encroaching depression, is now forever bound to an automobile. It's an incredible shame and a phenomenon sadly taken for granted, even endorsed.

A few years ago the talented Moby made a splash by licensing his songs to Intel, the teen TV show "Charmed," Nokia phones and Rover SUVs, sometimes before they appeared on albums. Again, he succeeded in introducing his soulful pop grooves to a wide audience, but at the expense of having them associated with other media.

Moby and a new legion of pop fans may be puzzled that I see that association as regrettable. The artist was exploiting new avenues of distribution, and what does it matter whether you hear a song on the radio, a TV show or a commercial? The difference is that today's retail theater, designed to coerce and sell, robs music of its own visual and emotional power. I once admired Moby's album "Play" but never listen to it because of its association with the oppressive drone of consumerism. Is that the legacy a musician wants? Does the human spirit find release in a phone commercial? I can't believe that Bob Seger and John Cougar Mellencamp don't regret the choice that eternally welded their music to Chevy trucks.

The offensive Muzak philosophy that music can condition consumer behavior or create a psychic soundscape shows up in all kinds of public places. I was once talked into going to a rural spa where, after sipping tea in a Zen garden, you are placed in a tub of hot cedar chips to drain the toxins and stress from your body. I must confess I began to relax like Buddha, except for one thing. Once I was in the tub, the whispering attendant asked me if there was anything else she could get me. Yes, I said, could you please turn off the soporific New Age music? Once she did I could listen to the rain outside hitting the spa's roof, and that's when I began to sink into genuine tranquility.

I don't mean to sound crotchety. I can be sitting in a bar and smile in solidarity with the bartender who programmed the wistful and witty Mountain Goats song into the sound system. And I relish the Chopin nocturnes that my corner cafe sometimes plays in the morning. I also don't mean to raise the hoary complaint that music in public is further fraying some grand social fabric, as if life in America in 2007 is supposed to resemble a 1920s Paris salon. I'm in love with the modern world. I am.

Social critics like to bemoan the iPod, complain that society has collapsed into everybody living in their own private Idahos. But in fact listening to music on an iPod, or accumulating songs through file sharing, is a way to reclaim music from the manipulations of the marketers, to escape the claws of the behaviorists. Carving my way through the crowded city, while listening to music on my iPod, allows me to feel in touch with my surroundings. Art that doesn't manipulate is what forms real social bonds.

"We do not like to be pushed around emotionally," the avant-garde composer John Cage once said. "The purpose of music is to sober and quiet the mind, thus making it susceptible to divine influences." I know that sounds high-minded, but it also sounds right to me. I daresay the spare piano pieces by Erik Satie and the minimalist organ works by Arvo Pärt owe their enduring popularity to how delicately they slice through our congested soundscape. They allow us to hear the hum of our own consciousness, to hear something like enlightenment.

Which brings me back to why No Music Day is wonderful and why we should launch the aural holiday in America. What it's really about is not escaping the incessant and unwanted drone of music in public. It's about learning how to listen again.