Now that I am ready to start investing, I want to find out if my money can grow in green fields. 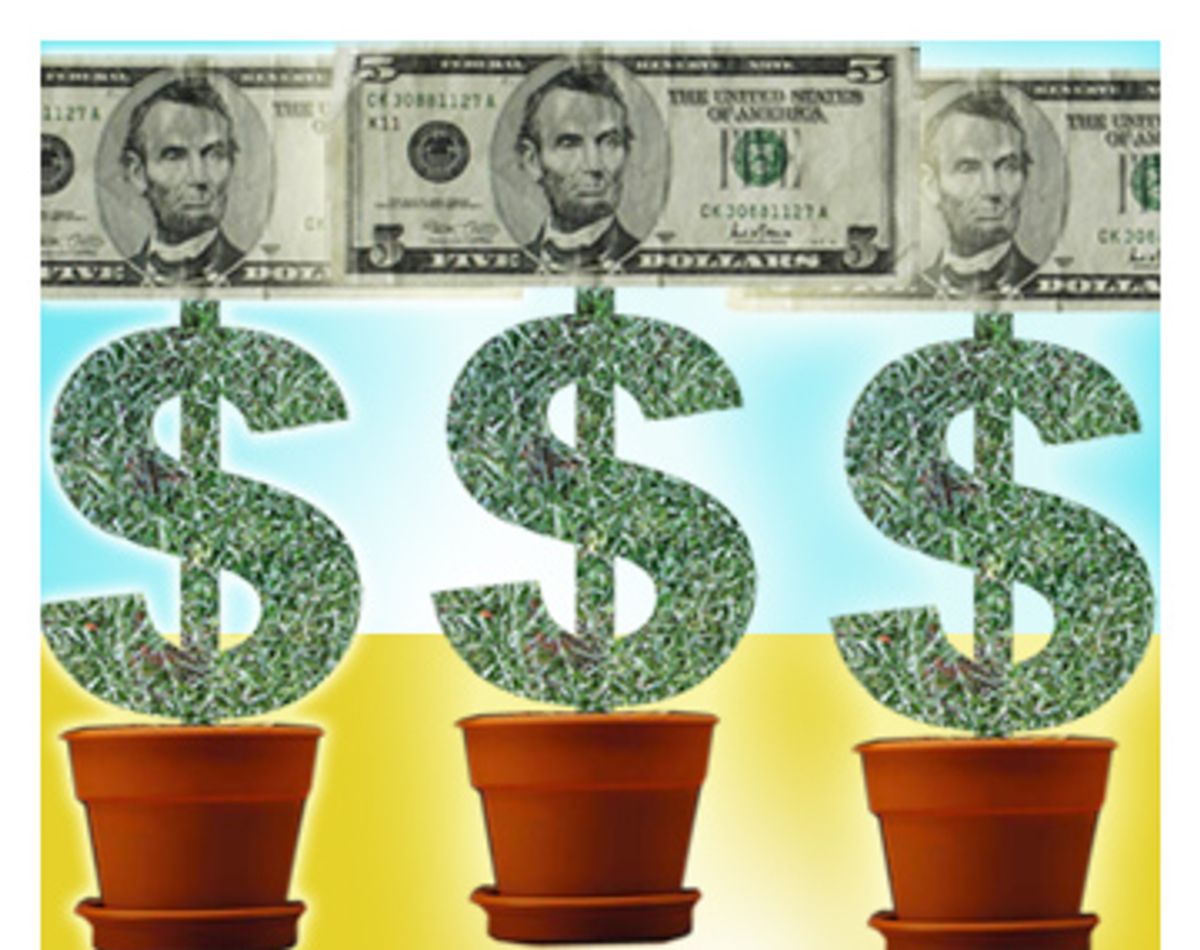 My great-grandmother Pearl, a shrewd woman, managed to save 20 percent of every paycheck that her husband Leo, a plumber, brought home each week. The checks, at least in the 1920s, were $5, but by the time they retired, they had saved enough to own a small shopping center. When she died last month at the age of 100, she left behind her recipe for meatballs (lots of ketchup), inspiration for the art of perfect housekeeping, and tens of thousands of dollars for her children, grandchildren and great-grandchildren.

So, for the first time, I've started to think about investing. In search of a firm that could help me invest in companies that aren't raping and pillaging the planet, I found Trillium Asset Management Corp. One of the oldest socially responsible firms in the country, they directed me toward the $50 million Green Century Balanced Fund, a mutual fund that invests in environmentally responsible companies.

"Green investing isn't going to solve all the world's problems, but if you're concerned about the environment, then it's critical that your investment dollars reflect that," says Eric Becker, a vice president of Trillium who co-manages Green Century. "If you're investing in companies that continue the cycle of pollution, that's a waste of your resources."

That caught my attention -- and the fact that I don't need millions, only $2,500, to get in the game. Becker was kind enough to answer a bunch of other questions I had about how green investing works.

If I join your fund, how do I know my money will only be invested in sustainable businesses?

We avoid companies that have a negative impact. That includes those involved in nuclear power, are major polluters, have a poor track record of compliance with federal and state environmental laws, or are major chemical firms, mining companies and corporations that process ore like steel and aluminum. We also like clean energy like solar and wind power, fuel cells, the next generation of biofuels. It's a way to participate in the growth of the energy marketplace, since we can't own oil companies.

How do you figure out what makes a company green? Do you have spies?

Our researchers do not spy. We talk directly with companies about their policies. We pull together data from state and federal sources like the Environmental Protection Agency's Toxic Release Inventory. It allows us to compare companies to their industry average and see who's polluting more or less. We have relationships with community and environmental organizations that might know things about a company's actions that we might not find out from other sources. Plus, we've pushed companies to create what's basically an annual report for their environmental impact. There's certainly the temptation for companies to gloss over what's going on, but we read the reports carefully and can usually read between the lines to see how a company is living up to its environmental goals. Occasionally we go on-site, but we don't want to fly people around the country; it uses too much carbon.

Would you invest in Wal-Mart?

No, we're not even close to investing in them. While they're doing good things for the environment by buying more organic materials and foods and trying to reduce packaging, the way they put Main Street businesses out of business, and their overall focus on consumerism, isn't compatible with the concept of sustainability. If you're always focused on everything being the cheapest, you're pushing your suppliers to cut corners and not really, truly reflect the costs to the environment.

We do invest with them right now, but we're having a lot of debate about that. We're concerned they're standing with American car manufacturers in fighting against higher fuel-efficiency standards. We think that's contrary to their history as an innovator.

So you're basically picking the least bad companies?

Right now, the sustainable corporation is an aspiration but not a reality. Every company uses more resources than it's returning, and produces more waste. If you're uncomfortable with any level of unsustainability -- that's not a word, but you know what I mean -- you're not going to find a mutual fund that's acceptable and you won't be able to invest in stock at all.

I see you invest in Staples, whose CEO, Ron Sargent, has given consistently to Republicans. Does that mean if I invest with your fund, I'm in some way making him money that he can donate to politicians I don't support?

Yes. But if you avoided investing in companies that gave to Republicans, you'd have very little left to invest in.

Would it be better to invest in big oil companies and make gazillions, and then give some of my windfall to whatever environmental companies and nonprofits I like?

No, because you're going to do just as well investing in companies that are consistent with your environmental values. You don't need to make that compromise.

Somehow it's hard to believe that I don't have to sacrifice my bank account for my principles.

Studies have shown that it's more likely you would make higher returns over time with a socially or environmentally screened portfolio. Factoring environmental information into your investments can reduce risk because companies that are doing a good job are more likely to avoid pitfalls. Innovest found that within certain sectors, the greener companies are indeed doing better. Look at Studies of Socially Responsible Investing and you'll find a whole bunch of links to studies.

Over the past few months, solar stocks have been extremely high because their businesses are growing so fast and solar production costs are falling. By 2012, the cost of solar will be on par with fossil-fuel-based electricity. As we start to address global warming, wind and solar look extremely compelling.

Would Jim Cramer recommend these stocks on "Mad Money"?

I don't know; I don't watch it. Right now, he'd probably say to short them, sell them so that the prices fall, and then buy them back when they're cheap. But we don't do that.

What other green investment funds exist?

Well, I'm not supposed to be talking about these because they're our competitors. But the Winslow Green Growth fund is a good fund. The New Alternatives Fund focuses on clean energy and has been around a long time. And there are some new alternative energy funds, like Guinness Atkinson Alternative Energy Fund. They're much riskier because it's a sector fund instead of what we have, which is diversified in different types of companies.

Do you see yourself as a money therapist?

Yes! That's exactly what I am. My father was a psychiatrist. I'm definitely a money counselor.

So counselor, can I get rich with you?

I think you'll do very well.