Five books to help you become a chef by New Year's!

The foundation of great cooking is technique, not recipes. 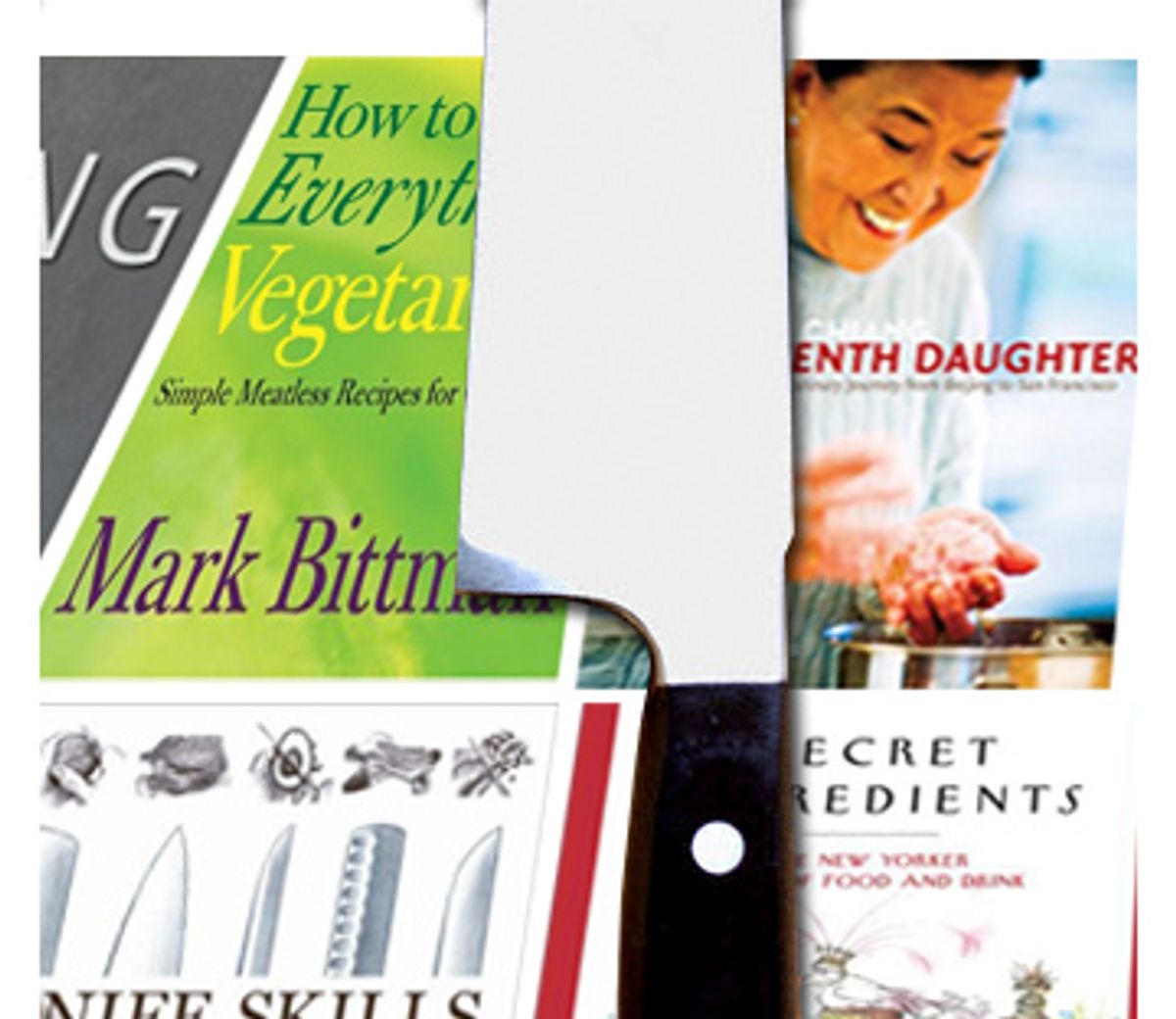 Thomas Keller, the man many critics have deemed the country's best chef, once told a food writer that if he had his way, he'd write a cookbook that contained no recipes, just techniques. I like that. I think I've learned most of whatever cooking skills I possess not from following recipes but from reading about techniques and about the history of food. And I don't think I'm unique: Being a good cook is about instinct, about knowing what to do before some Food Network chef tells you. Or, even better, knowing how to fix a recipe when it doesn't work out, about getting comfortable enough with your own skill to leave behind the pre-written recipe. We put together this list with that goal in mind. What you'll find here are books that, yes, often contain recipes but also provide a solid food education along the way. And before you start with the hate mail (that's "Mr. Dickhead" to you), please note that I haven't even made an effort to make this comprehensive; that would be impossible. Instead, it's restricted to books that came out in the latter half of this year, so if you want to give them as gifts, they'll still have that great new-book smell.

If the sheer visual appeal of this coffee-table book doesn't hook you, Peterson's approach should. The book's subtitle doesn't lie: This really is an education in the fundamentals of cooking in a surprisingly compact 500-page package, with a wide selection of recipes to draw from and, more important, detailed but comprehensible explanations of the underlying techniques. The only drawback is Peterson's almost myopic focus on classic French approaches, which can be a hindrance at times (an appetizer section devoted almost exclusively to puff pastry applications, pâtés and caviar is downright puzzling). Still, if you're looking for a manual to take you smoothly from boiling water to wowing the in-laws, you can't miss with this one.

I don't think I'm saying anything original by observing that knife skills are both one of the most important things for an aspiring home cook to learn, and one of the hardest. But it really is amazing to observe how much faster and more efficient your cooking can become once you've acquainted yourself with the right way to use a knife; just using, say, the proper procedure for dicing an onion will instantly make you faster in the kitchen. But it's hard to learn knife skills without direct experience, and some instruction manuals are more confusing than helpful. Not this one: Hertzmann's instructions are easy to follow, and the accompanying illustrations, for the most part, are remarkably clear and detailed.

"How to Cook Everything Vegetarian: Simple Meatless Recipes for Great Food," by Mark Bittman

Bittman is exactly the man who can make vegetarian cooking less about guilt than food. Writer of the New York Times' "Minimalist" column, in addition to hosting a string of shows on PBS, Bittman provides a solid philosophical background to vegetarianism, explaining why, even as an experienced food writer not afraid to tackle a wide diversity of animal products, he's eating less meat these days. And he delivers. This is the kind of book that makes you realize you don't have to subsist on seitan and get naked with Pamela Anderson to be a vegetarian. (Told you. Sorry.) What's also nice is that it showcase's Bittman's continuing evolution. His already formidable cooking skills have been sharpened by cooking with real restaurant chefs and letting them make fun of him (on shows like "Bittman Takes On America's Chefs" and "The Best Recipes in the World"), but he hasn't given up his regular-guy approach. Which means that, even for people like me who've tried the vegetarian thing before re-realizing that frequent helpings of pork fat make the world a happier place, Bittman's latest is a great way to learn how to make meatless cooking and eating worthwhile.

"The Seventh Daughter: My Culinary Journey From Beijing to San Francisco," by Cecilia Chiang with Lisa Weiss

Your average non-Chinese cook may feel daunted by home-cooking Chinese food more complicated than a stir-fry, and there's a dearth of books that demystify the cuisine. But Chiang, one of the first to bring authentic Chinese cooking to American restaurants, has written a good one here. This is about recipes, but the techniques are explained clearly and with an eye toward real teaching. Especially helpful is co-author Weiss, who chimes in with suggestions and changes that smooth the transition from restaurant to home recipe. Chiang's life story, which forms the backbone of the book, won't join the pantheon of great autobiographies, but it's still a decent, sometimes heart-wrenching, read.

Maybe it's just me, but the books that have taught me the most about cooking aren't instructional manuals at all, just collections of good food writing from which I can absorb little details as if by osmosis. I've found that the yearly "Best of Food Writing" collections are great for that, but sadly, the publisher informs us there will be no 2007 edition. Fortunately, this New Yorker collection fills the void with, as might be expected, some of the best food writers and food writing of the 20th and 21st centuries. Sure, you might not be able to learn how to roast a chicken from Calvin Trillin, and John McPhee's musings on a trip devoted to foraging wild food aren't too practical for the home cook, but even the essays that aren't educational are still inspiring.