This movie about a pregnant teen will inevitably be picked apart by abortion rights and antiabortion types alike, but it's really a story about people, not politics. 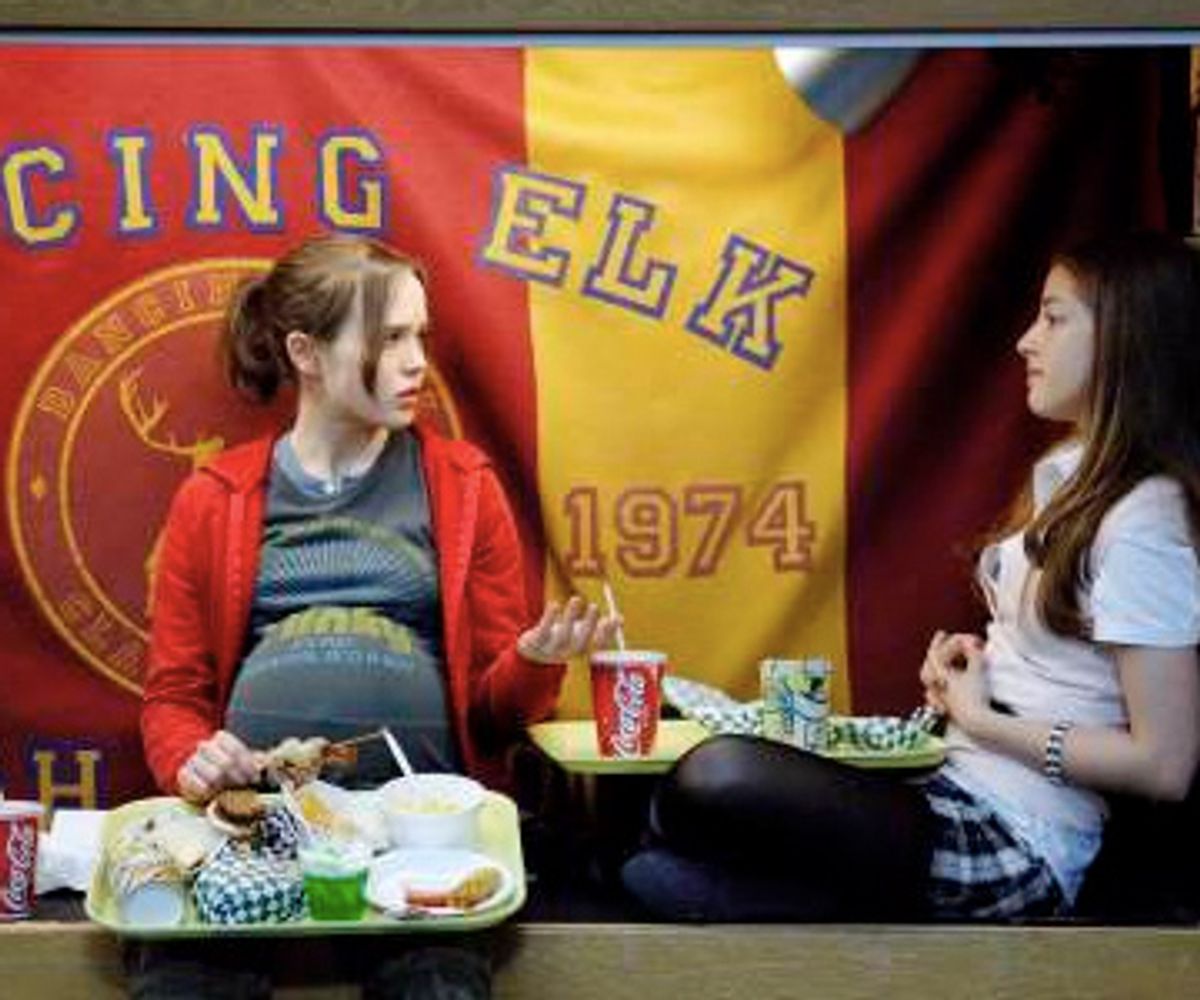 There are lots of good reasons to stay away from hip little indie movies, from pictures made by precocious young directors (or, perhaps worse, older ones who should know better) who are certain they've got a handle on the, you know, irony thing. Kiddie beauty pageants, the callousness of the tobacco industry, Brooklyn 20-somethings hanging around in their Spartan apartments with little or nothing to do: It's not that those couldn't be subjects, or at least starting points, for good movies. It's just that pictures like Jonathan Dayton and Valerie Faris' "Little Miss Sunshine" or Jason Reitman's "Thank You for Smoking" or Andrew Bujalski's "Mutual Appreciation" spend more time winking at the audience than drawing it into any kind of conspiratorial intimacy. For filmmakers, there's safety in putting quotation marks around everything: No one ever has to know what you really meant to say because all that matters is what you "meant" to say.

For the first 20 minutes or so, "Juno" -- which was written by Diablo Cody and is the second picture directed by Reitman -- appears to be one of those movies clogged with quotation marks. The picture is so densely packed with meticulously sharpened one-liners and zigzagging, freestyle pop-culture references that its cleverness is exhausting at first: I couldn't tell if the gags and jokes were going to serve the story or mow it down. But as lively and entertaining as "Juno" is, Reitman and Cody have also done the work of shaping the story into something emotionally direct, unsparing and generous. This is a picture about the way love between family members is sometimes expressed through annoyance, about friendships that, mysteriously and surprisingly, fold themselves into the shape of love, about the way sometimes the biggest choices we make in life aren't things we can articulate, justify or rationalize to other people. Instead of hiding these behind a scrim of quotation marks, Reitman, Cody and their actors put their hearts on their sleeves: Their movie is intimate and inclusive, the exact opposite of groovier-than-thou.

Ellen Page (probably best known for her role in the 2005 "Hard Candy") is Juno MacGuff, a 16-year-old girl who becomes pregnant the first time she has sex with a friend, Paulie Bleeker (Michael Cera), who, at that point, isn't quite yet a boyfriend, although Juno's feelings for him seem to be the beginning of love. She can hardly believe what has happened to her -- the movie opens with the requisite peeing-on-the-stick jokes -- but once the truth finally sinks in, she dials the local clinic (from her cozily cluttered teenage bedroom, on a novelty phone shaped like a hamburger) to make an appointment. Or, as she puts it, in her deadpan, gun-slinging delivery, to "procure a hasty abortion."

But for reasons that aren't clear to anyone, least of all to herself, Juno can't terminate the pregnancy. She decides she'll give the baby to a couple who really want the child, a decision that her father, Mac (J.K. Simmons), and stepmom, Bren (Allison Janney), greet with surprise and a degree of bewilderment, although they don't hesitate to offer their help, whatever choice she makes. Juno's mind is made up, regardless: She and her best friend, Leah (the flaky and wonderful Olivia Thirlby), have already located the perfect adoptive parents, Vanessa and Mark (Jennifer Garner and Jason Bateman), through a want ad the couple placed in the local Pennysaver.

I'm dreading the inevitable: that "Juno" will be seized upon by groups and individuals with all sorts of pregnancy-related agendas. But this is a story about people, not about political or even moral convictions. If anything, it stresses that even though the whole idea of pregnancy and childbearing is an intensely personal issue for any woman, it's still the sort of thing that invites random aggressive pronouncements and proclamations -- generally disguised as helpful advice -- from friends, family members and total strangers alike. (That's an angle Judd Apatow's "Knocked Up," a very different movie, addressed as well.)

"Juno" doesn't make judgments or pronouncements. Its great beauty lies in how generous it is toward all its characters. Cody, a blogger and the author of the memoir "Candy Girl: A Year in the Life of an Unlikely Stripper," can't resist a snappy line. Actually, she can't resist one snappy line connected to another, and another. There are times when the movie could use just a little more breathing space, but even so, Reitman handles this material beautifully: The picture skims along so breezily that sometimes you don't pick up on the full strength of its emotional undercurrents until a scene or two later.

This is the kind of writing and filmmaking that ensures there's something for every actor to do, and to a person these actors rise to the challenge: They're one of the finest ensembles I've seen in any movie this year. It's a measure of the picture's bold openheartedness that Simmons and Janney -- two actors who are always terrific -- don't get stuck with the usual dopey-parent roles. Janney possesses the face of a born skeptic; she has the best "Is that swampland you're trying to sell me?" expression of any performer working today. Maybe that's why it's so easy to believe everything she does: When that wry, upturned smile kicks in, you know she really means it. And Simmons, whose character is an ex-military guy turned HVAC specialist, delivers every line with understated dryness. I laughed at everything he did, although none of it prepared me for his finest moment, late in the movie, when he visits with Juno in the hospital delivery room and reassures her, with just a few quick words, that someday she'll be there on her own terms.

That's only a suggestion of the way the movie works emotionally: Just when you think you've got its number, it sends an unexpected hook your way. Garner and Batemen both carry the flaws and attributes of their characters with a marvelous degree of clarity: Vanessa is the kind of control freak who seems impossible to live with, but Garner ultimately shows us a person who's guarded and shy, who needs to learn how to express who she really is. We can see why Bateman's Mark, who used to be a rock 'n' roll guitarist and now writes advertising jingles for a living, feels crushed by her, but also how he fails to understand her. Together, they suggest the way seemingly perfect marriages have their little (or large) cracks.

Most touching of all are Cera and Page as the movie's unlikely, tentative lovers. Cera -- already beloved by fans of "Arrested Development" and of the crass and sweet "Superbad" -- is wonderful, playing a scrawny, goofy kid barely out of adolescence (the bed he sleeps in is shaped like a race car) who has no idea what has just hit him. When Juno, heavily pregnant and extremely cranky, blurts out that she never asked him to marry her or anything, he looks at her, stunned and stung, and the line that comes out -- "You'd be the meanest wife, ever" -- is both offhand and loaded with pain.

Page's Juno is his perfect match. Even though she's young and modern and fresh, her face has a delicate, 19th century quality. In the midst of all the wisecracks the movie gives her -- at one point she remarks that being pregnant makes her "have to pee like Seabiscuit" -- you can still imagine that earnest, open, quizzical face peering back at you from a daguerreotype. I've seen "Juno" twice, and Page's performance seemed a little showy to me the first time. But on the second viewing, I saw that even though her line delivery has lots of wit and verve, Page's real strength lies in the way she listens to, and reacts to, the characters around her. When Bleeker calls her on how self-centered she has been (he manages to do so without turning it into an accusation), we see the words sinking in. "Juno" is partly about the necessity of making choices for ourselves, but it's also about knowing when we need to accept help from others. That idea is never spelled out in so many words; it comes through in the actors' faces. "Language is the house man lives in," Jean-Luc Godard told us, borrowing from Martin Heidegger, in "Two or Three Things I Know About Her." There are lots of words in "Juno." But in the end, it's really all about language.