The new graphic novel by Adrian Tomine of "Optic Nerve" fame may finally secure his spot in the cartoon pantheon alongside Daniel Clowes and the Hernandez brothers. 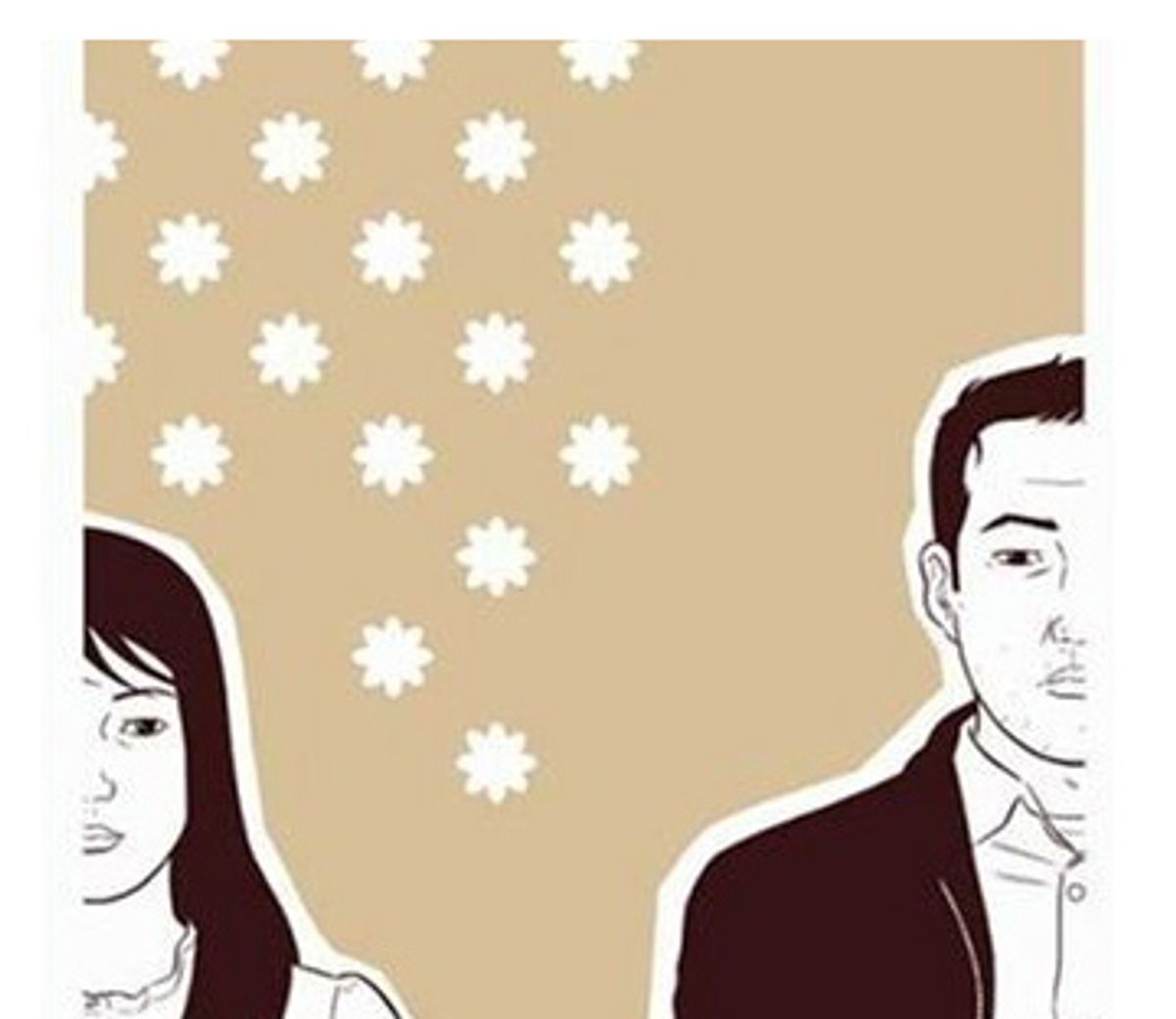 Under the dust jacket of Adrian Tomine's first graphic novel, "Shortcomings," printed along the bottom edge of the front cover, lies a ruler. It's a gentle nod to a recurring joke that reveals the insecurities of the book's main character, Ben Tanaka, a chubby, grouchy movie theater manager recently abandoned by his girlfriend. At one point, as he is considering dating a lesbian in the hopes that she'll be less "size-conscious," he repeats a riddle he heard in college: "What's the main difference between Asian and Caucasian men? ... The Cauc."

Stereotypes aside, Tomine must also be feeling his own pressure to measure up. As a teenager in Sacramento, Calif., he began to hand-distribute his "Optic Nerve" series of comics about young Bay Area loners. Over time, after he moved to Berkeley to major in English, and as the issues of "Optic Nerve" were collected in the books "Sleepwalk" and "Summer Blonde," the stories grew longer and more subtle. The wait for the next issue has been getting longer every year, perhaps because Tomine's exacting standards keep getting higher.

This new graphic novel -- Tomine's first -- would seem to mark his arrival as a peer of the great cartoonists of Generation X, such as Daniel Clowes and the Hernandez brothers. His publisher has printed an unprecedented first run of 25,000 copies and the book has been acclaimed by novelists such as Junot Díaz and Jonathan Lethem. (The latter has called Tomine's work "as deceptively relaxed and perfect as a comic book gets.") If the critics are to be believed, Tomine's small lonely moments are destined to stand with those of Raymond Carver and Alice Munro.

The reigning mood of his work is a sort of detached longing. Nowhere is this more apparent than in his single-panel illustrations. For instance, a cover he drew for the New Yorker shows a clean-cut young man on the subway who locks eyes with a stunning blonde reading the same book on a passing train. The moment is both detached and intimate, mundane and yet somehow heartbreaking: You could imagine him just sighing and going back to reading -- or madly scouring the city for her.

Many of Tomine's characters are, in fact, ordinary people who find themselves turning into stalkers and creeps. In the title story of "Summer Blonde," for example, a timid man begins to follow a girl he meets in a greeting card store and unthinkingly gives away one of her closest secrets. In "Hawaiian Getaway," another story from that collection, a lonely Chinese-American woman unintentionally meets a nice white boy while making a prank call, then invites him to her grandmother's funeral. Like most of Tomine's vignettes of love-starved Gen-Xers, the charm of these stories lies in their subdued tone and bittersweet endings, which often hold open a slim chance of redemption.

"Shortcomings," which binds together three recent issues of "Optic Nerve" that tell a single continuous story, is Tomine's most ambitious work by far. Its length is something of an obstacle, as moments that might have been charming in a shorter story seem to hold back the plot. It deals with race and sex in a way that is more playful and explicit than anything Tomine has done before. Compared to earlier work that was more brooding, the tone is light, with plenty of allusive banter and satire. But it is also a real tragedy whose central character seems intent on standing by as his life falls apart.

Ben Tanaka, a 30-year-old movie theater manager in Berkeley, treats his girlfriend Miko poorly, alternating between bitter criticism and sullen withdrawal. After she discovers his all-white porn stash, Miko suggests they "take some time off" and moves to New York City. Ben is crushed but in time he begins to pursue a series of blondes. Following a failed attempt to kiss the artsy punk girl who takes tickets at his movie theater, he has a brief affair with a bisexual graduate student who soon dumps him with the sendoff, "I could be totally brutally honest about why I'm doing this, but I'm going to restrain myself because I'm not sure you'd ever recover." Shaken, Ben flies to New York City, where, spying on his own girlfriend, he discovers that she has been sleeping with a white man.

Tomine has said that there was a time when he felt that to avoid being seen as a crusading Asian cartoonist he had to "make race a non-issue and deny its impact on life." Clearly this period is now over: Nearly every page of the novel deals with an anxiety specific to his own brand of ambivalently Asian Gen-Xers, or, as Tomine calls them, "characters that happen to be Asian." At the outset, Ben repeatedly denies that being Japanese means anything to him. But he is conflicted about his own assimilated status: He squirms when confronted with spoken Korean and Japanese, rendered in a series of panels that will be as unintelligible to most readers as they are to Ben. As should be clear from his dating patterns, Ben clings to an obvious double standard: It's fine for Asian guys to hit on blondes, but white boys had better stay away from those helpless Asian girls -- especially his own Japanese girlfriend.

This kind of double-think is not Ben's only shortcoming: He is a bitter narcissist with, as his own girlfriend points out, "weird self-hatred issues," "relentless negativity" and a pathological fear of change. Tomine depicts these flaws almost too faithfully in Ben's consistently sullen expression, which stands out all the more among the other characters' precisely inflected faces. Ben does have a half-redeeming friendship with Alice, a serial-dating Korean dyke who is something of a narcissist and a hypocrite herself. And he has his tender moments. But he seems consistently clueless about his many flaws.

After a hundred pages with such a grating character, the reader may feel pushed beyond pity to a sort of morbid curiosity. Although sour protagonists are not new to comic books or literary fiction, it is still a serious choice to put one at the center of a graphic novel; after all, he's there in nearly every panel staring the reader down. In response to the piles of letters he has received complaining about Ben, Tomine has written that while he is "disappointed if someone hates the book because they hate the character, I also feel somewhat gratified." This suggests that Tomine knows exactly how abrasive he has made Ben, and even that he relishes the chance to confront us with him.

In the end, Tomine is such a skillful cartoonist that it doesn't really matter how you feel about his characters. His panels are exceptionally easy to read, combining the precision of line drawings with the gentle pacing of art-house film. The facial expressions and gestures are subtle, and they stand out against the storefronts of Berkeley and Brooklyn, N.Y., which he renders with uncanny fidelity, down to the old light fixtures of Chinese restaurants that have since been remodeled. His dialogue is sharp and true whether he's portraying a squabble in a dive bar or the negotiations that precede a kiss.

In this book there is also a strong element of visual satire, taking aim at politically correct Asian American cinema and American Apparel ads. And Tomine leaves a little room to breathe by inserting silent frames: While Ben is escorting Miko to her plane, for example, we see only a haunting series of aerial views of his empty car in the parking lot.

Despite all the technique involved, the story itself does feel a little slow, perhaps because Tomine is not yet fully comfortable piecing together his vignettes into a full-scale plot. And it takes some patience on the part of the reader to stay with Ben to the bitter end. But the book is so pleasurable and ambitious that these come across as minor shortcomings.