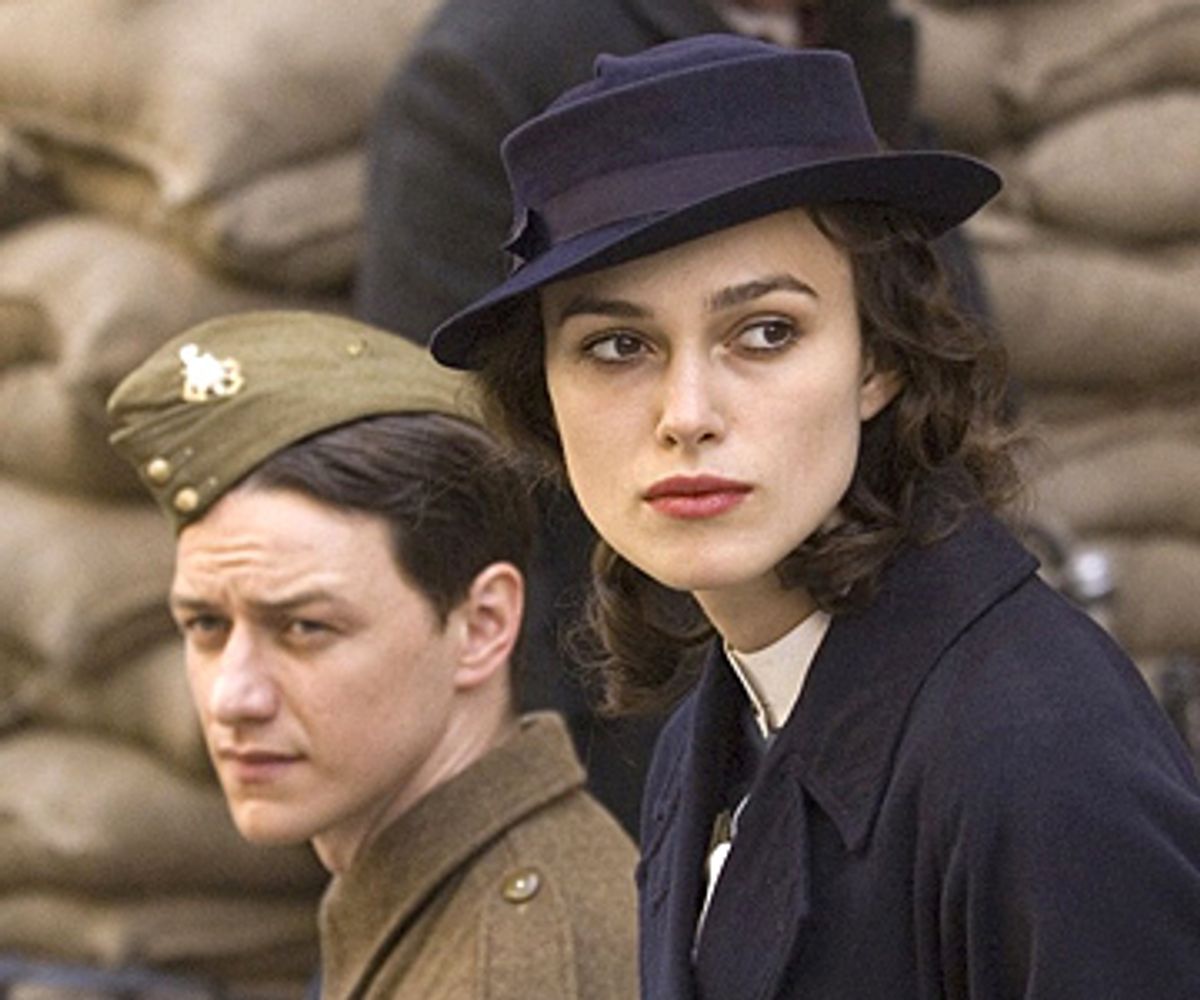 In adapting any book for the screen, a degree of reinvention comes with the territory. How much is too much depends on far too many things: the book, the director, the screenwriter, the actors, and the wildest of all possible wild cards -- the tastes, passions, idiosyncrasies and bugaboos of each moviegoer. It's a wonder any filmmaker ever comes close to getting it right.

Ian McEwan's 2001 "Atonement" is such a beautifully constructed novel, and so layered with meticulously observed detail, that it practically begs to be screwed up on film. But Joe Wright reimagines the novel with just the right amount of creativity and insight, intuiting what's cinematic, and romantic, about the story without crushing any of its delicacy. Wright dared to take on one of the most beloved novels of all time in 2005, with "Pride & Prejudice." The picture angered plenty of Austen purists, who seemed to see Wright as a low-class rube incapable of understanding the brilliance of the source material. Sometimes it seems book lovers want their favorite books to arrive on the screen DOA, simply so they have another excuse to revisit the worn-out argument that moviegoing can never be as good as reading. But it's probably an even bigger sin when a filmmaker delivers an adaptation of a great book that isn't boring. Wright committed that alleged sin by refusing to turn Austen's extraordinary book into something slow, proper and reverent, instead choosing to make a picture that's alive and immediate, as well as intensely attuned to class issues.

He's done something similar with "Atonement." Wright and his screenwriter, Christopher Hampton, may not hit every note perfectly, but the picture they've come up with is full-bodied and intelligent. (Shot by Seamus McGarvey, it's also stunning to look at.) Wright gets all the softness and beauty of McEwan's book, but he also stresses its steeliness: This is both a love story and a reflection on the way artists shape art to come up with a more palatable view of the world. In that way, art doesn't just help us sort out our feelings; it helps us survive them.

"Atonement" begins in 1935 and stretches to the present day; it's a story about love that goes wrong and survives nonetheless. Cecilia Tallis (Keira Knightley) is a well-educated young woman from a respectable family who can't quite sort out how she feels about Robbie Turner (James McAvoy), the son of her family's housekeeper (Brenda Blethyn). Robbie and Cecilia have grown up together -- Cecilia's father has paid for Robbie's education, and Robbie now hopes to go on to medical school -- and Cecilia is having trouble deciding whether she feels great affection for him or if he simply annoys the hell out of her. The answer is neither: She's in love with him, a realization that dawns on her when she receives a typewritten love letter from him, one that took all his strength and courage to write.

Cecilia has a 13-year-old sister, Briony (Saoirse Ronan), a direct, unsmiling child who's fond of tapping out flowery plays on her little typewriter, which she and other members of the household -- including her cousins, Lola (Juno Temple) and a set of twins named Pierrot and Jackson (Felix and Charlie von Simson), who have been sent to live with the Tallis family while their parents undergo a messy divorce -- perform for the adults. Briony has a certain kind of arrogant confidence peculiar to the very young and very bright -- she has given zero consideration to how much she doesn't know about the world. And so when she sees a romance blossoming between her sister and Robbie, she insinuates herself into their story in an aggressive and destructive way.

McEwan's novel is structured so that we reconnect with Briony five years later, after she's become a nursing student during the war. (She's followed on the heels of her big sister, who has already become a nurse.) Briony is such a distasteful character that her reemergence at first feels like a disappointment. Why should we want to spend more time with this awful creature? But McEwan makes us feel something for her, and Wright follows suit: The 18-year-old Briony is played by Romola Garai; the aged, present-day Briony is Vanessa Redgrave (whose performance is characteristically intense and unvarnished). There are three Brionys in "Atonement," each with a different, and progressively deeper, understanding of what art can mean to human beings.

The lovers, Robbie and Cecilia, stand in for both the art and the human beings: Technically, they're more a backdrop for the story than the subject of it, and yet there's no doubt they constitute its heart. The casting of those two characters means everything in "Atonement," and Wright couldn't have chosen his actors more perfectly. Knightley is an angular beauty -- there's nothing soft or welcoming about her. But that slightly off-putting air of resilience and fortitude may also be her great strength as an actress: She's like a willow capable of withstanding the most treacherous windstorm. Her eyes express doubt and devotion with equal conviction; when she looks at Robbie, there's no doubting the fierceness of her loyalty to him. And McAvoy is astonishing here. Wright urged him and Knightley to look at mid-century British romances like "Rebecca" and "Brief Encounter," and these actors apparently took those movies, and the restrained but deeply emotional style of acting within them, into their hearts. In one wartime scene, a brief, hurried meeting in a cafeteria, Robbie and Cecilia pour a lifetime of feeling into a few minutes spent on opposite sides of a small table. McAvoy's eyes show a blend of lovesickness and determination that's also completely lacking in sentimentality. The scene is both economical and luxurious, a small miracle of chemistry between two actors who understand that the material they're drawing from consists of so much more than words.

Because, in the end, it's selling a novel short to think about it only in terms of its words. "A book is symbols and words on the pages; it happens in your head. As on 'Pride & Prejudice,' I sought to make a film adaptation of the book that happened in my head as I read it," Wright says in the press notes for the movie. If you've read "Atonement," the book in Wright's head isn't going to match yours exactly. (It doesn't always match mine.) But I still marvel at the ways Wright has chosen to translate the quiet drama of this book for the screen. He gives us a beach scene at Dunkirk shot in one long take, a sequence that conveys the weightless burden -- it's weightless because there's nothing to be done about it -- of soldiers waiting to go home, or to die.

Even the simpler, smaller details Wright chooses have consequence and meaning. In one sequence, Cecilia gets ready for a dinner party -- Robbie's going to be there, so she wants to make sure she looks her best (even though she's not sure why). Wright intercuts shots of Cecilia flitting restlessly around her bedroom, switching outfits, wiping off her lipstick so she can change the color, with shots of Robbie, in his far more modest room, typing out his love letter to her. The sequence is perfectly balanced, itself a metaphor for the way indecision and grand, life-changing decisions can often go hand in hand. McEwan wrote a novel about the moral responsibility of artists. Wright has made a film that honors the imaginative responsibility of an adapter.