Religious controversy aside, this lavish adaptation of Philip Pullman's beloved book is its own kind of hell. 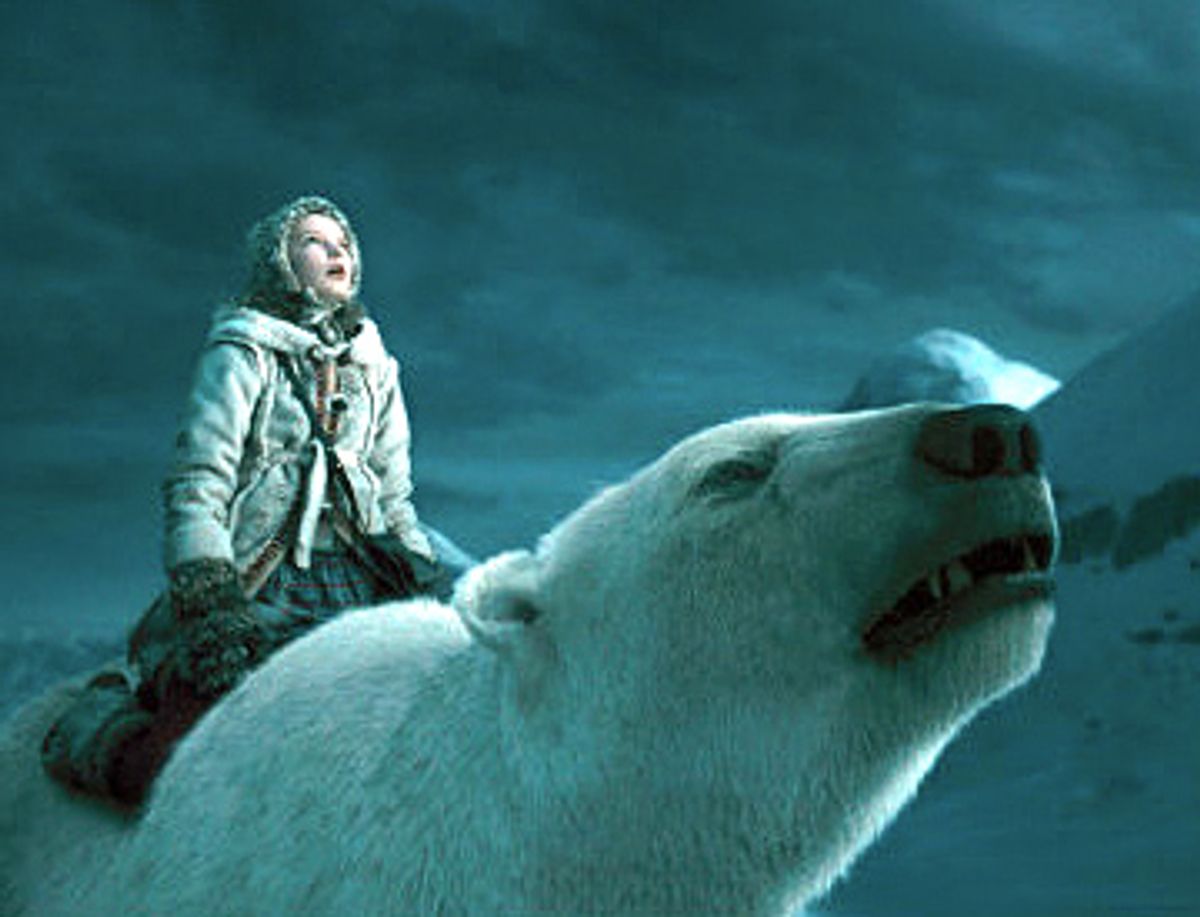 I can think of no more dispiriting experience this holiday season than seeing the crestfallen faces of several of my colleagues as they trundled out of a screening of Chris Weitz's adaptation of "The Golden Compass." Those faces said it all: Their faith had been shattered; there was nothing left to believe in; God must surely be dead. How could a book they'd loved so much be turned into such utter, soulless crap?

This movie version of Philip Pullman's popular children's novel has taken a lot of heat from Christian groups, particularly William Donohue's one-man band the Catholic League, who fear the material will lead impressionable kiddies down the path to ruin. According to these reliable sources, Pullman's "His Dark Materials" trilogy -- of which "The Golden Compass" is the first book -- instructs children to form miniature armies to go out and kill God, or something like that. Spokespeople for some of these groups have tempered their outrage after actually seeing the movie: Weitz has toned down whatever antireligious sentiment might have been found in the first book, replacing it with vague, nondenominational murmurings about the significance of learning to think for oneself. But apparently, the idea that children might actually think for themselves is still too hot to handle. These Christian groups fear that if children see the movie, they may want to read the books. And we can't have children reading now, can we?

The great bummer is that the movie version of "The Golden Compass" is unlikely to inspire anyone to read anything. Most of what's magical about Pullman's novel has been mechanized, obviously at great expense: It must cost a heap of dough to make animal figures look like they're talking, and there's barely an instant in "The Golden Compass" when you can't hear the money gears turning. This is the kind of movie that was made by throwing dollars at stuff, as opposed to using imagination, thought or even just common sense. Whatever complex or interesting ideas might have been found in the source material have been watered down, skimmed over, mashed into nonsense or simply ignored.

Maybe that would even be OK, if the story actually made sense. But the movie is episodic and cluttered. Characters are always on the move, trekking from here to there and back again, and we're barely made to understand why, or how big the stakes are: Even when Weitz (who also adapted the screenplay) tries to portray some of the more chilling details of Pullman's book, sometimes brutally, they still end up seeming inconsequential. The movie is designed to be this holiday season's fantasy spectacle, à la "The Lord of the Rings" movies, or the first entry in the projected "Narnia" series, "The Chronicles of Narnia: The Lion, the Witch and the Wardrobe," but it has none of the inventiveness of those movies, and even its visual pleasures feel meted out. Weitz may have been trying to make a movie that would both engage adults and not confuse or terrify children. The movie he has made (which has a PG-13 rating) hovers in a nowheresville that's like a long, tedious dream. I can't tell who this thing is for: I can't imagine it will make much sense to anyone who hasn't read the book.

"The Golden Compass" is set in a world something like our own, but not quite. The icy territories of the North are populated by armored warrior bears; witches flit through the skies; each human is accompanied through life by an animal "daemon," which is essentially that person's soul; and a governing body known as the Magisterium tries to keep order among humans, but, as the movie makes gratingly obvious, wants only to control them. In the middle of all this is a brave 12-year-old girl, Lyra Belacqua (Dakota Blue Richards); we know she's brave mostly because other characters keep remarking on how brave she is, not because we see her tested in any particularly dramatic ways. Lyra is an orphan, or so she believes: She has been raised at an institution of higher learning known as Jordan College, where she spent her early childhood happily roaming the grounds with her daemon, Pantalaimon (voiced by Freddie Highmore), at her side. (Children's daemons are able to change form at will. Pantalaimon is sometimes a bird, sometimes an ermine, sometimes a striped cat. Once a human reaches adulthood, his or her daemon settles into a permanent form.)

One day Lyra's best friend at the college, a kitchen boy named Roger (Ben Walker), mysteriously goes missing. In fact, everywhere, children -- particularly those of lesser means -- are going missing, much to the distress of their parents. Lyra wants to find Roger, but she becomes distracted and bedazzled by a glamorous woman who has shown up at the college, Mrs. Coulter (Nicole Kidman), who offers to whisk her away on an adventure. Lyra is thrilled to go, but before she sets off, the master of the college (Jack Shepherd) gives her a mysterious object, a gleaming gizmo with dials and strange little pictures, which can be used, by those who know how, to divine the future and discern the truth.

There are other characters floating about here: Daniel Craig appears (only briefly, alas) as Lyra's explorer-scientist uncle, Lord Asriel; Sam Elliott turns up as a plain-talking Texas airman named Lee Scoresby (his expressive, lively face offers momentary relief from the movie's tedium); and Eva Green touches down, again, all too briefly, as a smolderingly beautiful witch named Serafina Pekkala. There's also a giant warrior bear, Iorek Byrnison (his voice belongs to Ian McKellen), the most believable of the movie's fake-looking talking animals: He's a soulful creature who has endured much suffering, although not as much as this movie puts us through.

Obviously, Lyra is going to go up against some pretty evil forces, and it's not hard to guess that the Magisterium is going to be one of them. The group exists, as one character puts it, to "keep people out of danger," but obviously, its real desire is to control them, and a mysterious substance known as Dust has something to do with its ability to do so. Because this is the first part of a three-part story, none of this is supposed to quite make sense, yet. Still, most of the significant plot movements and details are presented not as mysteries that will later become clear but as totally confusing stuff that just sounds silly and made up. The picture looks pretty enough in places: There are lots of '30s-style English interiors, rooms paneled in heavy, dark woods and hung with weighty drapes; and there are some sequences set in the icy, blue-white landscape of the frozen North -- the setting has a kind of forlorn beauty. (The cinematographer here is Henry Braham, although the movie does, of course, feature lots of computer-generated effects.)

But nothing that happens in "The Golden Compass" is particularly well dramatized, and because Weitz has tried to cram in so many details and plot machinations, there's never any time for relationships to develop between characters. Some of the performers seem to be struggling in nearly every scene: Richards is an appealing actress, but she looks lost here -- Weitz seems to have directed her to play the virtue of bravery instead of playing a person. And Kidman, here an unnervingly elegant-looking creature swathed in creamy white jersey and slinky golden frocks, plays Mrs. Coulter as a cartoon villain. She swans about like a drag queen in training. (Most of the villains here seem vaguely, or even overtly, homosexual, the old standby movie shorthand used to denote any sort of corrupting influence.) Her face appears to have been carved from a block of ivory; its aggressive serenity is creepy, and not in the good way.

Roman Catholics are worried that "The Golden Compass" will turn kids into little God haters. I'm more worried it will give them nightmares: There's a vicious fight between two armored bears, and a distressing sequence in which Lyra and Pantalaimon are separated and terrorized. Those seem to be the places where Weitz tried to preserve the gravity of Pullman's book, but he doesn't have the skill to make them mean anything. With his brother and directing partner, Paul, Chris Weitz has made some terrific pictures, including "American Pie" and "About a Boy." It's possible he just doesn't have a feel for fantasy. The movie's scale seems to have overwhelmed him: He has made a spectacle with no heart, no brains and no soul. All we can see is machinery.