Time to buy a Warhol 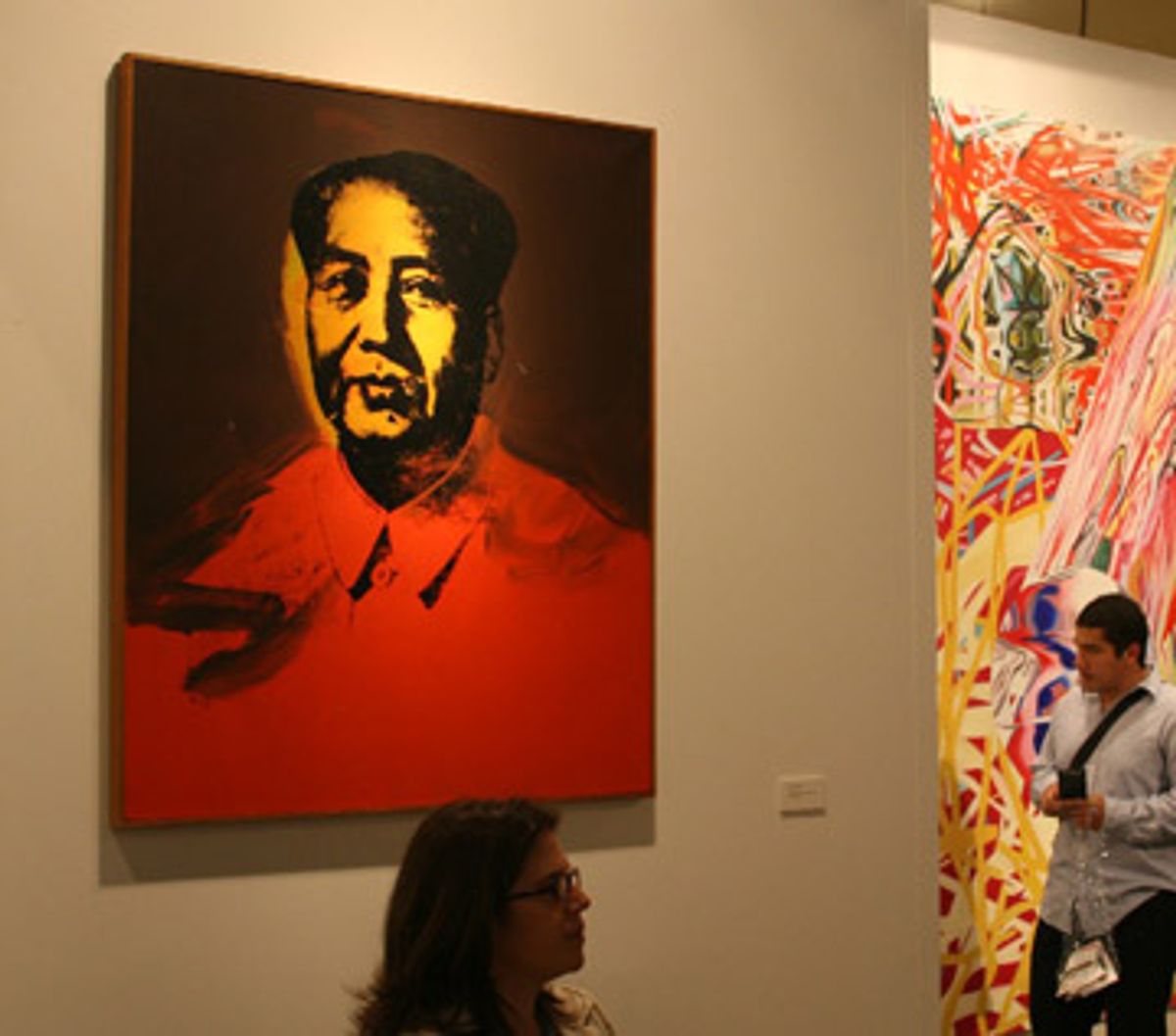 Thanks, in large part, to George W. Bush's no-end-in-sight war spending, the once-mighty dollar is tanking, a development that recently prompted a senior People's Bank of China official to note that the greenback is "losing its status as the world currency." Meanwhile, U.S. real estate values are reeling from the subprime mortgage crisis. The British pound, stronger than ever, now costs American tourists two dollars a pop. Even Jay-Z is letting his audience know he knows where the money is -- the money that matters. In his latest video, "Blue Magic," the rapper cruises through the Big Apple flashing wads of crisp, sexy, colorful euros.

It's time to buy a Warhol.

Given the jitters in the money and real estate markets today, it's probably no surprise that many investors have turned to art. Driven by an unprecedented global buying spree of everything from hot-ticket contemporary works to time-proven choices from Picasso to pop, works of art have become a de facto international currency in their own right. In mid-November, collectors and art dealers spent $315.9 million at Sotheby's New York on modern and contemporary works in one two-hour auction sale alone; in London, Russian millionaires have become important buyers at auctions, and in Beijing, the Dashanzi gallery district in a former industrial zone has quickly become a must-see destination for jet-setting art mavens hoping to discover the next Yue Minjun or Zeng Hao. Yue, a sculptor, and Zeng, a painter, are already hot properties in art centers like Los Angeles, New York and London, far beyond their homeland. (Prices at the top auction sales in London and New York are now denominated in Russian rubles along with listings in dollars, euros, British pounds and Japanese yen.)

The frenzied buying and selling that characterize today's international art market have found their locus at the Art Basel Miami Beach fair (Dec. 6-9), which has brought together some 200 of the most pace-setting galleries from around the world, representing more than 2,000 artists in every creative category, from painting and sculpture to photography, video and sound art. ABMB, an offshoot of Switzerland's long-running summertime Art Basel, Europe's leading annual fair, first opened in 2002 and quickly became the most important of the many art fairs that take place around the United States each year. Its impact has been so sudden and so powerful -- besides pumping countless millions of dollars into Miami's tourism-dependent economy -- that it has spawned dozens of satellite fairs that take place at the same time, including Scope Miami, Pulse, the NADA (for "New Art Dealers Alliance") Art Fair, Red Dot Miami Beach, Photo Miami and Aqua Art Miami. Some of these other fairs have something of an alternative air, like Red Dot, which takes place in a hotel in the South Beach district. Smaller, regional galleries from around the United States, but also well-known outlets like Nancy Hoffman Gallery, from New York, rent guest rooms, throw out the beds and, for a few days, set up shop. The ambience is fun and folksy, with none of the "VIP vs. ordinary people" hierarchy that prevails at Art Basel Miami Beach. Then there's a fair like Aqua Art Miami, which takes place simultaneously at two venues, the Aqua Hotel in trendy South Beach and a space in the new Wynwood district of warehouses that have been converted into galleries, perfectly embodying the fusion of art, design, fashion and entertainment sensibilities that now fuels the vibe of Miami chic.

During the first week of December, though, Art Basel Miami Beach is the undisputed epicenter of the city's art-feeding frenzy. Overpriced and unabashedly elitist, the fair charges $14 for a plastic-flute splash of champagne and $30 per adult for admission ($10 more than the Museum of Modern Art in New York) and, like a rock concert, started selling tickets via Ticketmaster back in October. "The VVV of the VIPs," as one financial advisor referred to the richest customers in attendance, are pampered in restricted-access lounges, where their art-buying consultants or curators and private bankers hover around them, helping them to determine where best to drop their next million. For if, in little people's money, $10 is the new $1, in this world, $1 million is more like the new $100,000. Art Basel Miami Beach's main corporate sponsor is UBS (originally Union Bank of Switzerland; in 2000, the bank merged with PaineWebber to form a global financial-services corporation).

Pausing to take in the minimalist display at the stand of Galería Elvira González, from Madrid, four helmet-haired, Palm Beach-style matrons chatter about two footlocker-size blocks of steel and a large abstraction made with paintstick (oil paint in a crayon form) by artist Richard Serra. "How much are the sculptures and the painting?" one of the women asks. Without looking up from his laptop, the young man at a clutter-free table responds: "One point two each" (as in $1.2 million). Checking his on-screen price list, he adds: "And 380 for the paintstick."

The would-be buyer returns to her group and says, "Three-hundred eighty. That's not bad." The women move on. At this fair, no one bothers to append "hundred thousand" or "million" to quoted prices. Extra zeroes are understood.

"It's all about quality; collectors at every level are looking for the very best works," notes a representative of New York's blue-chip Acquavella Galleries. On the wall behind her desk, looking out over the hubbub of the fair: a 1973 silkscreen portrait by Andy Warhol of that late high priest of vitriol against "counterrevolutionary capitalist running dogs," Mao Zedong. Price tag for the picture of communist China's founding father: $12 million.

That canvas sold during the first few hours of the fair. Elsewhere, Gmurzynska, a gallery from Zurich specializing in classic mid-20th-century modernist works, was offering, mounted on a delicate rod-pedestal, a sponge painted by the French avant-garde artist Yves Klein (1928-1962) in his signature electric blue, for $1.2 million, and a small early Willem de Kooning painting of blue and pink geometric forms for $950,000.

"I'm sorry," a dealer at another stand replied apologetically when asked the price of a shimmering, bushy pile of white-metal strips by the American artist John Chamberlain, "but it's taken." The work by the American artist who is best known for his abstract sculptures crafted from junk-car metal had sold for $2 million.

"Go ahead, take a look; I'm just standing here to protect the work," New York dealer Jeffrey Deitch of Deitch Projects said invitingly as he stood at the entrance of his stand during ABMB's preview for VIPs the night before the fair opened to the hoi polloi. One of the most influential contemporary-art dealers in the world, Deitch is known for spotting and promoting emerging talents who often go on to become international stars. Decked out in one of his customary Italian-made bespoke suits -- this one was creamy yellow -- Deitch shielded from the crush of onlookers a crystal, chrome and 24-carat-gold low-rider bicycle on a mirrored platform made by the Chicago-based Puerto Rican artist Dzine.

By the opening of the first full day of the fair, news had spread that, for $35,000, a foundation in Spain had scooped up Dzine's super-bling-bling bike. Also on view at the Deitch Projects stand, where DJ Spooky stopped by on Thursday to survey the merch: a life-size male-nude portrait in a dreamy-realist mode by newcomer Kurt Kauper ($90,000); "A Dead Soldier" ($120,000), a 5-foot-high, 12-foot-wide oil-on-canvas painting by Kehinde Wiley, a young black artist who paints hip-hoppers against elegant decorative backgrounds and in mock-classical compositions; and a now-iconic -- for Jeff Koons, at least -- Koons sculpture, "Jim Bean, Log Car." For $1.65 million, the 1986 casting in stainless steel of an actual, imaginatively shaped Jim Bean bottle came complete, its title card on a nearby wall indicated, with a supply of bourbon inside.

"Everybody's happy, everybody's having a good fair; there's something for everyone here," a dealer from South America beamed as he graciously shooed away a reporter from his stand. "I'm sorry, but we need a little privacy now," he said, as he made way for a visitor from New York. "We have a meeting with a curator from the Museum of Modern Art." Apparently, everyone was at least looking, if not always shopping, too; numerous curators from American museums, including the new Nasher Museum of Art at Duke University, in North Carolina, scoured the fair along with packs of their respective institutions' wealthy benefactors in tow. The curators were making wish lists of works they hoped their moneyed supporters might acquire and lend or someday bequeath to their respective art palaces.

Meanwhile, buying and selling -- and hoping for good investments and planning where to put them -- continued feverishly into the weekend. After all, as one dealer at Art Basel Miami Beach told London's Art Newspaper, "A lot of people have private museums." In a collector-driven market, owning that kind of real estate, no matter how low the dollar falls, may be the most enduring status symbol of all.