Jim Cramer says he'll make you rich, but his eccentric financial advice for beginners might just make you crazy. 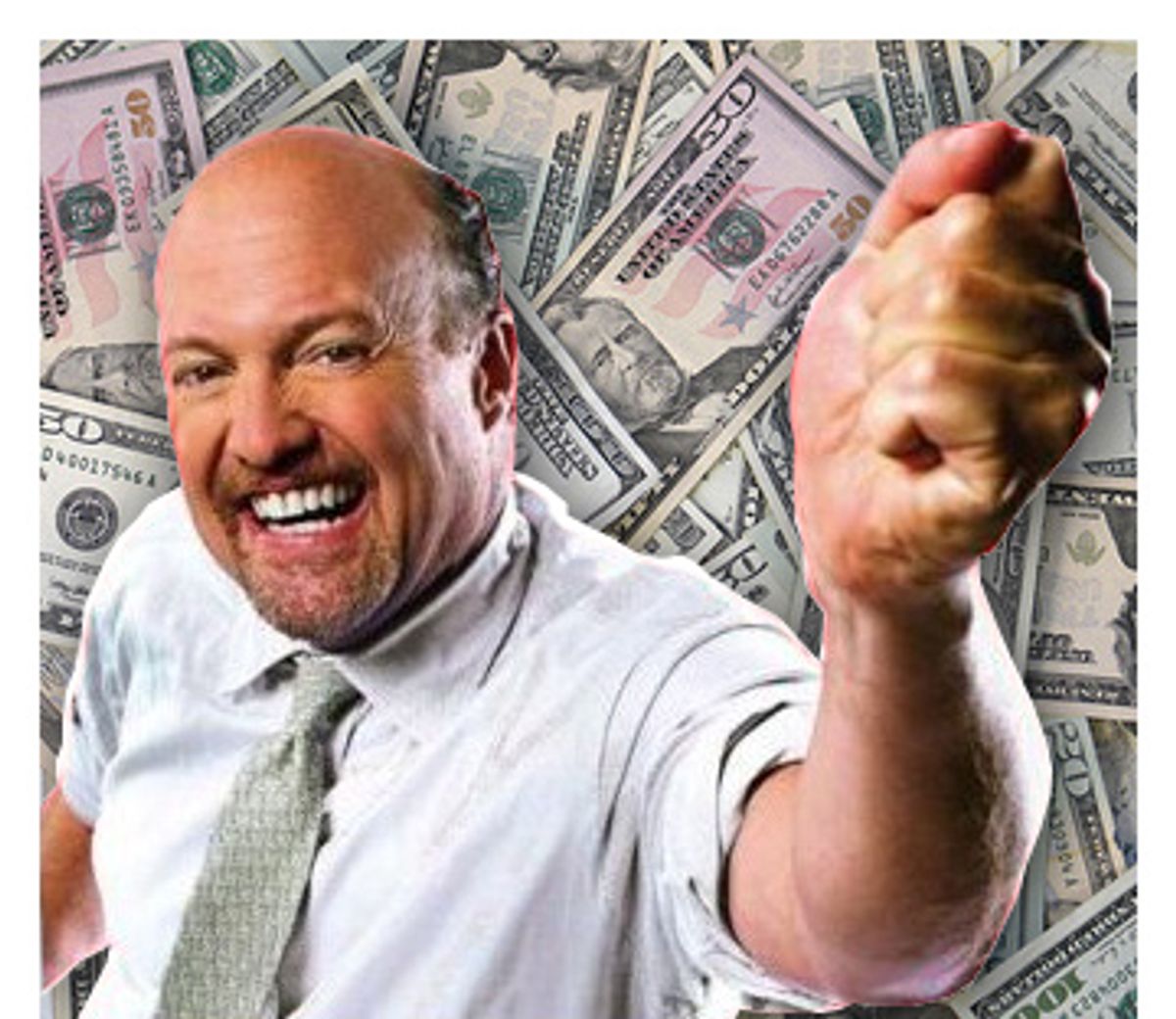 "Booyah!" That's Jim Cramer's rallying cry, a mix of frat boy bravado and manic capitalist opportunism. It's the shout-out that callers to his show on CNBC, "Mad Money," use right before they introduce themselves, a way of giving Cramer a big high-five and letting him know that they're on board: They endorse his eccentric, outspoken voice screeching out over the polite murmurs of the suited population of Wall Street. They love that he's the only guy who tells it like it is. And they firmly believe that they're in on a secret that only Cramer knows: You can get filthy rich if you bet on the right horse. Every day, Cramer plays a charismatic, erratic daddy figure to amateur investors, and they love him dearly for it.

And why shouldn't they, really? Of course Cramer is mortal and has a mediocre track record just like every other investment guru who claims he or she can make you rich. Of course Cramer's show is more entertainment than sound advice, and his admonitions and sweeping statements and odd digressions would confuse even the wisest, most sane investor who'd done her homework. Of course Cramer's refrain, "Do your homework!" stands at odds with the whole "Buy this! Sell that!" mania of his show -- imagining the guy on the phone giving "a big Washington, D.C., b-b-b-booooyah!" to Cramer meticulously analyzing a company's fundamentals is like picturing Britney Spears curling up with her favorite Thomas Pynchon novel. And of course studies show that trying to pick individual stocks is far less profitable (and potentially much more devastating) for the average expert, let alone the average amateur investor, than simply putting all that hard-earned money into a low-cost index fund and finding a hobby that has far less potential to bankrupt you.

But the denizens of "Cramerica" don't tune in to get sound investment advice, they tune in to see Cramer shout about the latest market foibles, rolling his googly eyes and throwing things and leaping onto his desk if the inspiration strikes. The Cramericans want to climb on board the world's most dangerous, rickety, teeth-grittingly unstable roller coaster, and they want to sit up front with Cramer, waving their hands and screaming all the way -- or as Cramer put it on a recent episode, "embracing the crass materialism that lies at the heart of rapacious, late-stage capitalism."

Cramer's no dummy, let's face it. Even though those googly eyes ogle you from the cover of all of his bestselling books, including his latest, "Stay Mad for Life: Get Rich, Stay Rich (Make Your Kids Even Richer)," the cheese factor doesn't necessarily suggest that Cramer is an utter charlatan. He's intelligent, he's lively, and "Stay Mad for Life" isn't nearly as scattered and irresponsible and flashy as you might imagine it would be, watching his show or glancing at the ridiculous cover.

Even so, is this really the guy you want to teach you the basics of personal investing?

Although Cramer writes in his introduction, "I have yet to read a book that provides the kind of specific, detailed advice that I believe people require if they're going to make the kind of sound long-term decisions about their money that lead to lasting wealth," plenty of great, basic personal finance and investing books exist, and most of them lay out the same advice: Get rid of your credit card debt, make sure you have a safety net, make healthy contributions to your 401K, take advantage of tax-free college savings, and most important, understand what you stand to gain from compounding interest.

Cramer covers a lot of those basics here, but his lively stream-of-consciousness style and his digressions make these concepts more difficult to follow than they are in other books for beginning investors (David Bach's "Finish Rich" series, for example). Instead of clearly outlining, say, the importance of life insurance, or using a few charts to make it painfully obvious how compounding interest and tax-free savings can grow over a few decades, Cramer lays out the essentials of personal finance like an impatient kid who can't wait to get to the fun stuff. He doesn't skip anything crucial -- the fundamental, unavoidable importance of retirement savings, the dire consequences of cashing out a 401K fund instead of rolling it over. But his writing is a little bit like his show: His strong opinions and digressions sometimes make it hard to follow the most important facts.

At times this approach can be refreshing, for example, when he writes, "Forget trying to get your money out [of your 401K plan] early, it's too costly," or when he writes that you should never, ever invest your 401K plan in your employer's stock. Strong opinions, sure, but these things really can't be overstated.

But at other times, Cramer tends to get snagged on his own investing pet peeves: He doesn't like automatic-savings plans and confesses a "wholesale distaste for anything involving your money that can be described as automatic," because that means you're not making active choices about your investments (although he admits that some people should use them if they can't save a dime otherwise). He kvetches for half a chapter about 401K plans because, among other things, they force you to choose between a small number of mutual funds with high expense ratios whose managers might not know what the hell they're doing. (But of course you should put in enough to trigger your employer's matching funds.)

He offers a list of several mutual funds he likes, on the basis of their managers, but he's prone to throw in qualifiers like, "His big position in IndyMac doesn't exactly inspire confidence either. I don't know where I come down with this guy." (Talk about not inspiring confidence.) And if the fund manager of one of the funds he recommends ever leaves, he strongly advises you to move your money out of that fund immediately.

Now, none of this is necessarily terrible advice. So why does it make me more and more worried about my money, instead of less? This was supposed to be fun, damn it!

I think it's safe to assume that 80 percent of investors don't want to do this much homework or worry as much as this guy does, and if they're encouraged to think and worry and act too much, they're going to end up moving money in and out of funds at the worst possible times. This is something that most investment advisors harp on. But Cramer is a man in constant motion -- just watch his show. Maybe he's an inspiration, but for those of us who can barely get our laundry done, a more practical, long-term, hands-off approach might be a little bit more realistic.

Cramer does give you the option to just avoid the major pitfalls and throw all your money in a few index funds. But if you're going to do that, clearly Cramer isn't your personal Lord and Savior, so why are you reading his bible?

The section on picking individual stocks sometimes reads like an extended disclaimer for the reckless enthusiasm of "Mad Money": "In the past, I may have done more harm than good by encouraging people to invest in individual stocks," Cramer writes, explaining that "stocks are great if you have a lot of time and you're really interested in investing," but "most people don't have a lot of time, and rightly, they don't want to spend ten hours a week researching and learning about stocks." He also suggests that individual stocks are best suited for your discretionary fund, that is, the money that you invest for fun and big profit, that you're not relying on for your retirement. This is a wise distinction, except that for most people, it'll mean saving less for retirement in order to have more money to play with.

Next, Cramer lists some bull markets (energy! infrastructure!) for the long term -- OK, maybe just the next five years. And then, there are some stocks that are worth buying and holding for ... a while! But not forever! Do your homework! Again, the plan isn't completely clear. There are categories you're supposed to buy and hold, yet you still have to look over the facts for each stock every week, regardless.

And be sure not to mess up in any of the following ways: "If you buy a position to fill a need in a portfolio, don't jettison it because it's not working." Or "Uninformed low-dollar amount speculation can wipe you out." Or "Don't let the market shake you out of a good long-term thesis." These are the sorts of alternating specifics and generalities that anyone who has played the market knows add up to a big, confusion-induced headache.

Will investing 10 hours a week scanning price-to-earning ratios and reading about management choices really make a big difference? Plenty of studies have shown that experts and amateurs alike let their fears and impulses guide them, time and time again. Most investment advisors, even those who've been proclaimed geniuses, agree that no one really has much of a real leg up, and imagining otherwise is wishful thinking: We all have the same information these days, and we're all following each other around in circles -- that is, when we're not being buffeted by an increasingly volatile, reactive, nonsensical stock market.

Eventually, instead of getting inspired to get rich and stay rich, reading "Stay Mad for Life" makes you feel as if you can't win without obsessing on your money the way Cramer does, somehow managing to make lots of good decisions -- even though Cramer himself appears, by most reports, to have a middling success rate. While I find it impossible not to cheer Cramer on -- his giddy, disturbed-genius shtick is infectious, and a big breath of fresh air in the otherwise stodgy world of investing -- I'm not convinced that he's the right guide for the average investor.

Ultimately, "Stay Mad for Life" offers the sort of idiosyncratic advice you'd expect from a control freak who's infatuated with money. But then, that probably describes a big portion of the population of America -- or at least Cramerica -- which makes this book a big old b-b-booyah to fans of the highflying monetary roller coaster. Whether they get a thrill ride to riches or just careen off the rails will be left to the whimsy of rapacious, late-stage capitalism.