The GOP's Iran option is off the table

Rudy Giuliani was counting on Iran as a weapon of mass distraction in the '08 race. But the flailing Republican right has just been disarmed. 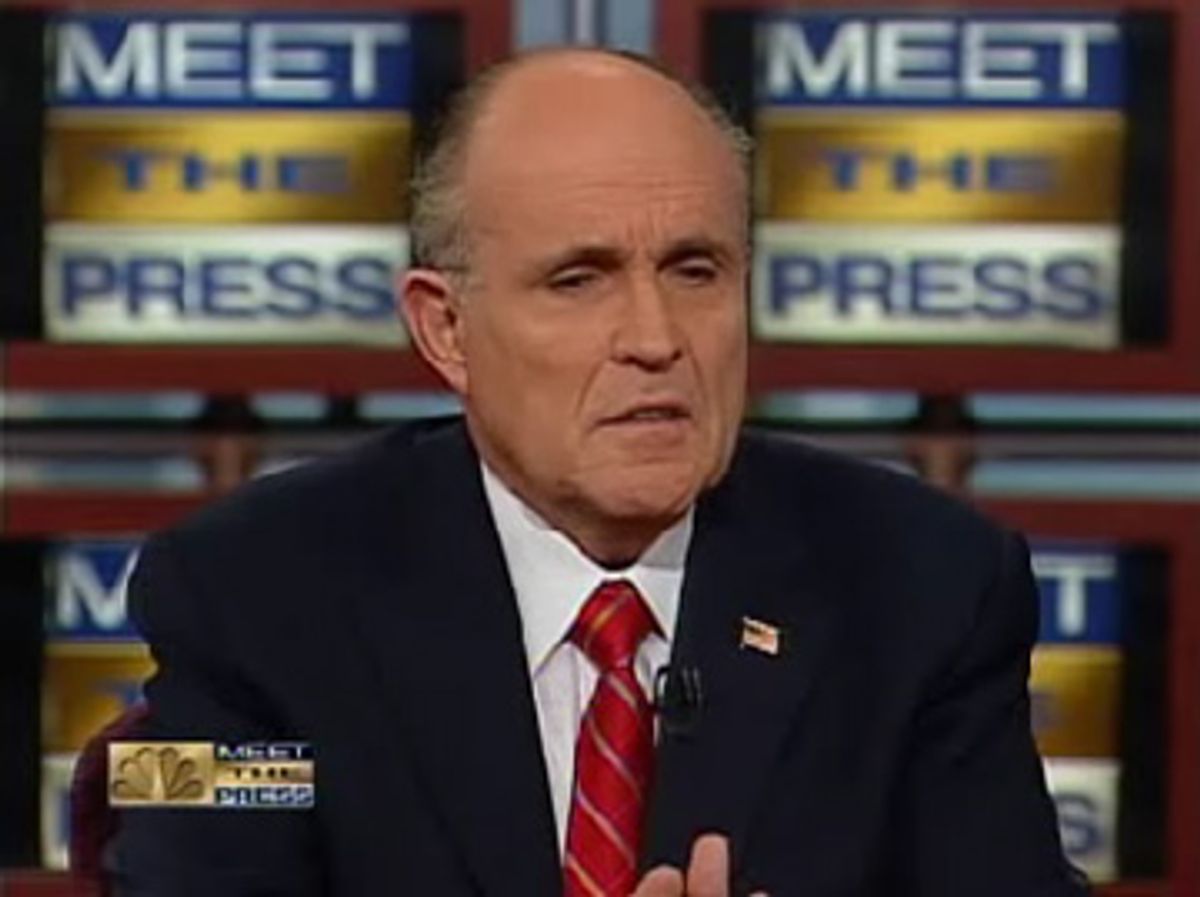 The conclusions of the latest National Intelligence Estimate regarding Iran's lack of a nuclear weapons program will have a profound impact on the 2008 presidential campaign. The report may well prove a key element in throwing the election to the Democrats. Republicans have used the alleged nuclear threat posed by Iran to scare the American public and to turn attention away from Iraq, economic troubles and Republican scandals. But the NIE findings have pulled the rug out from under the Grand Old Party.

Republican presidential candidate Rudy Giuliani initially dismissed the NIE, but on Sunday he backtracked substantially on "Meet the Press." He said of Iran, "And of course we don't ... want to use the military option. It would be dangerous; it would be risky." He added that it would be even more dangerous if Iran did acquire nuclear weapons, but immediately put on a mien of sweet reason: "We should utilize sanctions. We should utilize as much pressure as we're capable of." Now he represented the military option as a tool of diplomacy.

This is, of course, the same Rudy Giuliani who while campaigning has all but pledged to bomb Iran if elected. It is a "promise" and not a "threat," he has said, that if Tehran appears close to getting a bomb, he will "set them back eight or 10 years." While Giuliani hasn't specified how he would do so, he likely means launching military strikes on Iranian nuclear facilities such as the one at Natanz. That message has been accompanied by bluster from Giuliani worthy of a World Wrestling Federation ham in spandex: "We will not beg to negotiate with them. We're going to make them beg to negotiate with us." Such Hulk Hogan-style boasts may play to the Republican base, but Giuliani now seems more aware of the possibility that the war-weary public may not embrace his reckless bravado if he wins his party's nomination for the general election.

The release of the NIE will not stand in the way of more fear mongering from conservative Republicans and members of right-wing think tanks. Tim Russert on Sunday pointed out to Giuliani that advisors on Giuliani's own campaign team, including the arch-conservative Norman Podhoretz, were still talking belligerently about Iran. Fear mongering has been central to Republican Party politics not only since 9/11, but ever since the escalation of the Cold War in the 1950s. (Past conservative Democrats, such as Scoop Jackson, have specialized in it as well.) It is as hard for right-wing politicians to relinquish such a formerly effective campaign tool as it is for the Rolling Stones to stop performing "Satisfaction." But as Giuliani's turnabout demonstrates, they may be recognizing that they may no longer be able to convince the public that military action against Iran is warranted, or that Tehran poses a dire threat to the American way of life. According to recent polls, even this fall, when it was plausible that the Iranians were actively attempting to acquire a nuclear weapon, more than two-thirds of Americans opposed a military attack on Iran, while less than a third favored it.

Confrontational rhetoric toward Iran may begin to bounce off voters with little effect. The Republican presidential candidate showing the most improvement recently in the polls, Arkansas Gov. Mike Huckabee, did not even bother to keep abreast of the news on the Iran finding initially. When asked his view on the NIE, he admitted he had not yet heard about it. While other candidates such as Fred Thompson slammed Huckabee for being uninformed on so essential an issue, Huckabee's team appears to be emphasizing the importance of his being out on the hustings speaking on domestic issues. Huckabee's poll numbers have taken off, and Thompson's have fallen by eight points in recent weeks.

On the Democratic side, Barack Obama, who had pledged to open direct talks with Tehran, reacted with outrage to the news that Bush had been talking about World War III while his intelligence leaders were concluding that the Iran threat had substantially receded. Obama said, "It's absolutely clear that this administration -- and President Bush -- continues to not let facts get in the way of his ideology ... They should have stopped the saber rattling." Sen. Joe Biden concluded, "Iran is not a nuclear threat to the U.S. Iran should be dealt with directly, with the rest of the world at our side."

Indeed, some of the Democrats may well build on the ongoing campaign theme of "Who hyped Iraq?" by also running on the question, "Who hyped Iran?" The American public's confidence in what they are told by the government is sitting at rock bottom -- and the message that the Republicans in power are looking to manipulate the country into another highly risky and costly military adventure abroad could resonate powerfully.

While the latest intelligence estimate on Iran made the Bush administration look like latter-day Dr. Strangeloves and is vexing the Republican field, it may also hurt Sen. Hillary Clinton. To the extent that Clinton is perceived as having joined the Bush chorus with her positive vote on the Kyl-Lieberman resolution -- declaring Iranian forces terrorists and urging that Bush take more vigorous measures against Iran -- her campaign could suffer. After John Edwards criticized Clinton for essentially doing the bidding of Bush and Cheney by voting for the resolution, Clinton replied by saying of the Iranians: "There was a very broadly based belief that they were pursuing a nuclear weapon." That explanation sounds uncomfortably like the one she proffers for having voted to give Bush authorization for military action against Iraq, and as Obama's poll numbers in key primary states are rising, it raises questions about Clinton's political judgment.

According to a recent Gallup Poll, the Republican Party still has a 48 percent to 38 percent advantage when the public is asked which party is better able to deal with terrorism. The GOP retains slight advantages on immigration and moral values, as well. But on every other matter of concern to the electorate, the Democrats now have a solid lead. If the election is fought over domestic issues such as healthcare, the Republicans look to be in trouble. Fifty-nine percent of Americans say the Democrats are better able to deal with problems in that realm, and healthcare issues are listed as the No. 1 concern by about a fifth of voters.

The problem for Republicans is that George W. Bush's so-called war on terror -- originally envisioned as a generational struggle and a vehicle for installing a permanent Republican majority -- has gone from hard-charging to sputtering. The public appears to have concluded that the 9/11 terrorist attacks were an event rather than an ongoing condition. Most polls show that terrorism and national security are the chief concerns for about 15 to 18 percent of the electorate, but one recent Washington Post-ABC News Poll found that only 5 percent of the respondents listed those issues as their top priority. That comes as bad news indeed for Republican candidates such as Giuliani.

Meanwhile, the war in Iraq remains a major concern for voters, listed as the No. 1 issue by more than a quarter of Americans surveyed. Despite a drop from about 34 percent who put Iraq first in September to about 29 percent more recently, feelings against the war are hardly subsiding. Americans still desperately want out of Iraq, and more care passionately about that issue than any other. Even the military families with members who have fought in Iraq are now in synch with the 60 percent of the American public that is convinced the invasion of Iraq was a mistake.

According to polls, Americans overwhelmingly trust Democrats over Republicans to handle resolving the Iraq war. As of late last spring, about 61 percent were afraid that the United States' continuing presence Iraq will increasingly turn the whole Middle East against America, and a majority believed that remaining in Iraq would produce another attack such as Sept. 11. Given that conviction, it is understandable that as of early December three-fifths still want a timetable to be set for U.S. withdrawal.

For Republicans, the beauty of Iran as a campaign issue was that it involved a regime whose minions had regularly chanted "death to America" for decades, a regime that is actively hostile to the U.S. ally Israel, that had at least at some point been involved in international terrorism, and that -- above all -- was suspected of aggressively pursuing a nuclear weapons program. Americans had despised the Shiite clerical regime ever since Khomeini's regime took U.S. embassy personnel hostage, and ayatollahs with nukes was a national nightmare. Indeed, the ongoing threat of a nuclear-armed Iran had the potential for bolstering those Americans motivated by issues of national security, thereby rescuing the politically sinking Republicans.

Americans are not now going to fall in love with Iran, and suspicions may linger about Tehran's civilian nuclear energy research program. But voters are unlikely to take very seriously the idea that a poor, weak country of 70 million -- one lacking much of an air force and with no weapons of mass destruction -- is the most important problem that the United States faces. And if Iran is not the most important problem, then surely healthcare, the economy and getting out of Iraq are. On those issues, the electorate now tells pollsters that they overwhelmingly favor Democrats to do the job. In the future, historians may see the revelation of the National Intelligence Estimate on Iran in December 2007 as a real turning point for the 2008 presidential election.