A new coalition of religious hard-liners with ties to President Bush seeks to scuttle any plans for dividing Jerusalem between Israelis and Palestinians. 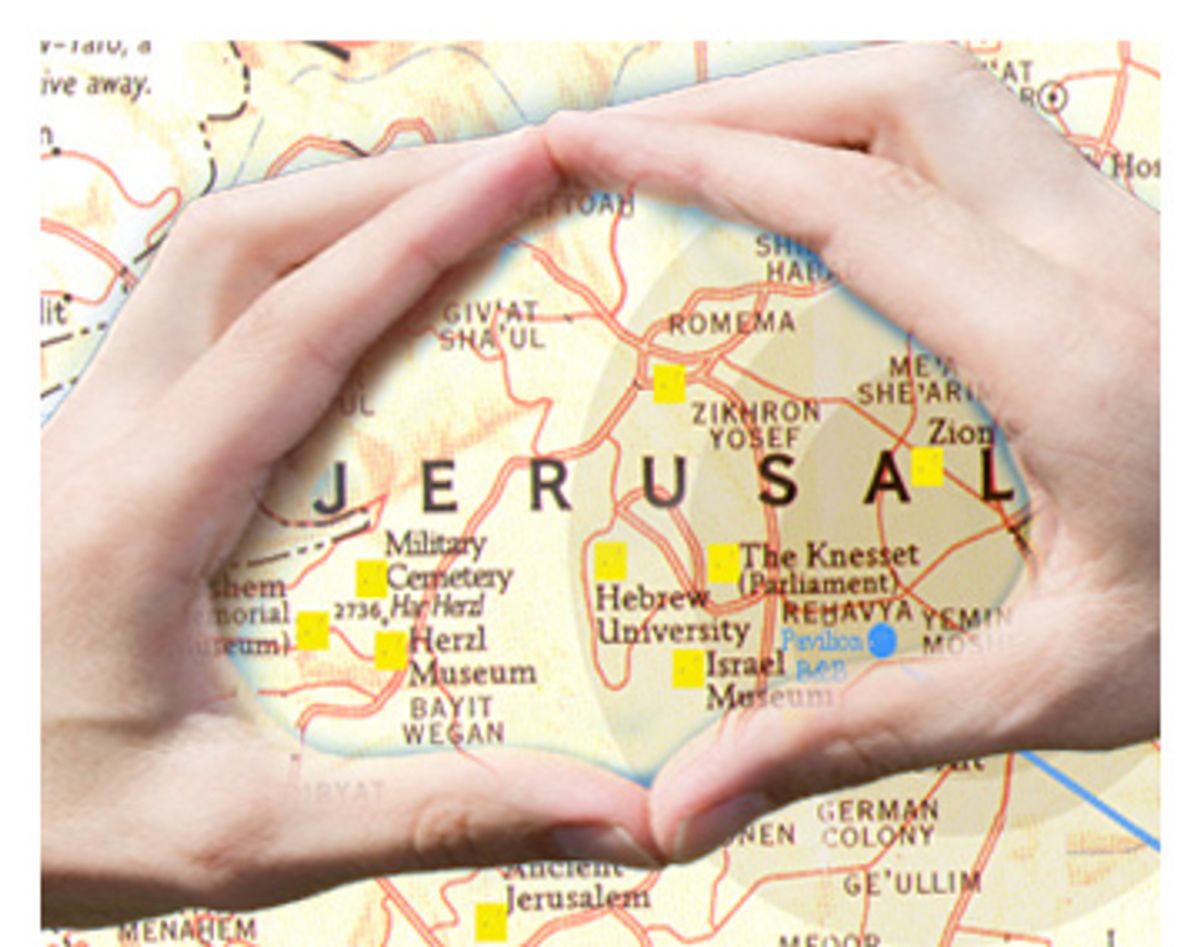 On Nov. 26, the U.S. State Department got hit with an unexpected barrage of phone calls. The Coordinating Council on Jerusalem, a new coalition of American groups with hard-line views on Israel, was on the line -- all of the lines. Or so the group said two days later in a press release, proudly proclaiming that with 10,000 calls in less than 48 hours it had managed to overload the State Department's voice-mail system. The group was making known its opposition to any Israeli concessions on dividing Jerusalem between Israelis and Palestinians -- an issue that was swirling around the Bush administration's peace summit taking place in Annapolis, Md.

The new coalition's dubious achievement wasn't much noticed by the media, and perhaps isn't in itself important, but it was a sign of battles to come in the year ahead, as Israeli and Palestinian leaders struggle to move forward with any real progress after Annapolis. Although most appraisals of the conference were reservedly positive -- after all, at least the two sides were talking seriously again after a seven-year drought -- the event also opened a can of worms.

On the eve of Annapolis, the new right-wing coalition's representatives directly lobbied a top Bush official with their concerns about the summit. Even Israeli Prime Minister Ehud Olmert took notice and seemed threatened by their potential to obstruct progress -- leveling some harsh words just before the Annapolis conference apparently directed at the coalition.

Annapolis was only the beginning of a renewed series of high-level negotiations, and the joint Israeli-Palestinian statement read by President Bush at the event was purposefully vague so as to avoid angering either leader's constituents or allies. Anyone reading between the lines, however, could see that the most explosive issue of all, dividing Jerusalem, had reemerged. The new coalition of religious groups seeks to use the incendiary Jerusalem question to scuttle any of the progress promised by Annapolis. Its efforts also threaten to cause painful rifts among American Jews, and perhaps shake up some pro-Israel political alliances.

Although the American Israel Public Affairs Committee, the most influential pro-Israel lobbying group in the U.S., seems to be taking a wait-and-see approach to the new high-level negotiations, some of AIPAC's major donors and allies are involved with the Coordinating Council on Jerusalem. The coalition is also being aided in its efforts by evangelical Christian groups and supported by figures such as G. Gordon Liddy. It is directed by an influential former fundraiser for George W. Bush, Jeff Ballabon.

Ballabon is a Washington lobbyist who served as a major fundraiser for the 2004 Bush reelection campaign and was the architect of a strategy that has sought to bring Orthodox Jews into the Republican fold, in an effort to balance the overwhelmingly Democratic voting habits of mainstream American Jews. Just before the conference in Annapolis, Ballabon, along with Christian leaders and representatives of various Orthodox groups, met with Bush's national security advisor, Stephen Hadley, to make sure their point of view, and the force of their commitment, were understood by the administration. According to the Israeli newspaper Haaretz, Hadley reportedly assured them that, for the time being, the issue of Jerusalem was in fact not on the negotiating table.

Some interesting fissures have begun to crop up along with the new coalition. A few weeks before the Annapolis meeting, a congressional letter requesting increased aid for the Palestinian Authority -- which would help it meet some of its obligations toward achieving peace -- was endorsed by AIPAC, surprising many in Washington lobbying circles. (The Israeli government had not opposed the aid.) That decision earned AIPAC a sharp rebuke by one of its most important donors, billionaire Sheldon Adelson, who said, "If someone is going to jump off a bridge, it is incumbent upon their friends to dissuade them." Adelson, reportedly the third richest person in the United States and a prominent donor to the Republican Party, is also a major donor to the Zionist Organization of America, a group that, although lacking anything near the clout that AIPAC wields, is still influential among Middle East hawks in the GOP. And it is a core member of the new Coordinating Council. The national president of ZOA, Mort Klein, told Salon in an interview that "Israel should not be willing to give away any part of Jerusalem to another entity, just as the U.S. wouldn't give away any part of Washington." He added, "Jerusalem is mentioned 700 times in our holy book. It's not mentioned even once in the Quran."

ZOA has been active for a long time, but has never gotten the kind of political attention enjoyed by AIPAC and other more mainstream groups, or by the Christian evangelical groups pushing hawkish Middle East polices who have joined the Coordinating Council. What has changed is that the obstructionist agenda of ZOA and the evangelical groups is now being aided by Orthodox and ultra-Orthodox Jewish organizations sympathetic to the goals of the newly formed coalition -- many of which have, prior to now, stayed aloof from international politics.

Agudath Israel, for example, an umbrella organization of ultra-Orthodox American Jews, recently broke its long-held rule of not delving into Middle East politics by speaking out against the division of Jerusalem. The Orthodox Union, the largest Orthodox Jewish umbrella organization in the United States, also recently broke its tradition of supporting the policies of the Israeli government, issuing a press release that sharply criticized Olmert's statements at Annapolis because he "did not explicitly resist Palestinian President [Mahmoud] Abbas' claim to a piece of Jerusalem."

That a successful peace deal would necessitate some sharing of Jerusalem is at this point essentially a given in the eyes of most political leaders. It has been floated subtly by Prime Minister Olmert's Cabinet allies, is quite clearly supported by many in the State Department and is thought of as an absolute minimum for agreement by Abbas.

To Orthodox Jews, however, Jerusalem is a red line (just as it is to their opposites on the Muslim side). Any perceived threat to sole ownership of the holy city summons dangerous levels of emotion and energy, even from those who would not normally pause from their prayers and everyday lives to wade into the swamp of Middle East politics. It is these thousands of Americans, normally not involved in Middle East discourse, that may give the Coordinating Council for Jerusalem the strength and potential to be a real obstacle to peace in the year to come.

These stirrings stateside have not gone unnoticed by the Israeli government. In response to the lobbying intended to preempt any talk of dividing Jerusalem, Olmert stated, "Israel is sovereign to decide on any issue regarding Israel." The message was that Jerusalem is an issue to be determined by Israel itself, and not by its hard-line American cheerleaders.

To be sure, the views of this new American coalition of religious right-wingers don't come anywhere near representing the consensus of American Jewry or of Israel's mainstream supporters in the United States -- whose views, unlike those of the CCJ, don't generally turn on Scripture but rather on issues of peace and security. Still, the vigor with which these actors have recently entered the debate, and the determined efforts with which they will likely proceed over the next year, aren't going to make anything easy for those striving for a Middle East accord of any kind.

The Annapolis conference may have been a start, but it has also unleashed a zealotry on U.S. shores that may once again help demonstrate how nearly impossible achieving Middle East peace could really be.