The demons you know

Bestselling author Iris Chang seemed to have everything -- including a bipolar disorder that led to her suicide. Author Paula Kamen discusses her friend's troubling story. 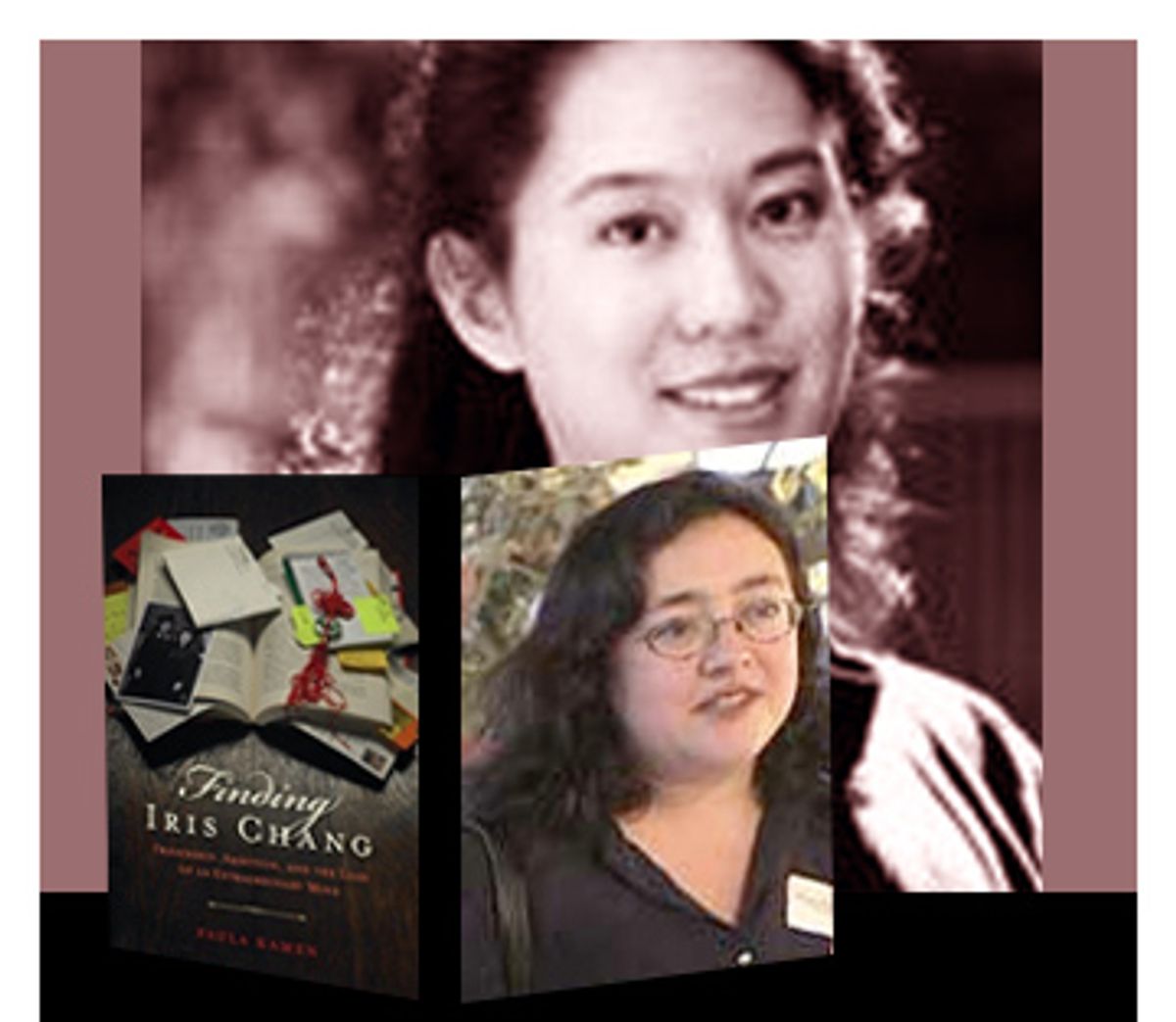 Iris Chang's bestselling book, "The Rape of Nanking," made her a literary star at the age of 29. She hobnobbed with the Clintons; she was a fixture on shows like "Charlie Rose" and "The NewsHour With Jim Lehrer." By 36, she had a husband, a 2-year-old son, and the beauty and success that had long made her an object of envy. Then, on Nov. 9, 2004, she was found in her car on a remote road near Los Gatos, Calif., dead of a gunshot wound to the head.

The news of her death was so startling that many concluded she had been murdered by political or government organizations, angered by her unflinching exposure of the rape, torture and murder of more than 300,000 Chinese civilians and soldiers by the Japanese army during a weeks-long siege of Nanking in 1937. When the San Francisco Chronicle published excerpts of Chang's three suicide notes, along with details of her breakdown, the mystery only deepened.

Longtime friend and author Paula Kamen wrote a eulogy for Chang in Salon, in which she openly discussed her past jealousy of Chang. "In college, I would have liked Iris Chang more if she hadn't always been one step ahead of me, frustrating all my major life ambitions," Kamen wrote. Kamen also talked about Chang's mental deterioration and the shock of how her life ended, a topic she returns to in her new book, "Finding Iris Chang: Friendship, Ambition, and the Loss of an Extraordinary Mind." A mix of investigative journalism, biography and memoir, the book chronicles Kamen's explorations into secrets Chang kept from even her closest friends, the devastating consequences of a long-undiagnosed bipolar disorder, and the conspiracy theories that still surround her death. Salon met with Kamen, who lives in Chicago, in the San Francisco Public Library to talk about what she uncovered.

Were you one of the people who initially thought Iris Chang might have been murdered?

I probably would have thought that if I hadn't had a conversation with her three days before she killed herself. She did sound paranoid and really disturbed, like I had never heard her. But I didn't imagine she would commit suicide. After knowing her for so long, I still couldn't fathom it. She had been the most envied person I knew. Anytime I would introduce her to a friend, their self-esteem would immediately plummet. After meeting her, everybody would say how they felt inadequate, because she just seemed to have the most perfect existence. She was rich and famous, beautiful, thin. She had a husband, a kid.

You spoke frankly about your jealousy, both in your Salon piece and in the book. Did you have any reservations about putting those feelings front and center?

It's something I didn't even do on purpose. The eulogy and the book are about the complexities of a real long-term friendship, and of course there are tensions, petty jealousies, but there's also a lot of connection.

What drove you to write the book?

At the time I wrote the eulogy, I didn't know what had caused her to commit suicide. All I knew was that she was writing about a lot of dark topics. Not only the Nanking atrocities. At the time she died, she was working on a book about the Bataan Death March. I had assumed all these dark topics had driven her to suicide, but then I found out there was mental illness at the root of it. I gradually saw the need to demystify the process of writing about dark topics, about how you can do it and still preserve your mental health. I also saw the need to clear up misunderstandings on bipolar disorder, because she had a lot of signs that no one picked up on. What we perceived as drive and what her husband called her "attention surplus disorder" were likely early signs of mania. And then I was overwhelmed by the outpouring from the Salon article. I had never gotten that kind of reaction to anything. People saw her as such a role model and so symbolic -- symbolic as a woman writer, as an Asian-American, as a working mother.

In some circles, conspiracy theories about her death still persist. Can you talk about those?

These were widespread beliefs about either the right-wing Japanese or about the U.S. government, which is who she feared. As far-fetched as some of the conspiracy theories may sound, a lot of this was based in some reality, so it took investigative journalism to peel back the layers and see what was fact and what was fiction. It just showed, too, the pressures she was under, and I started to feel paranoid after researching her for a while. Her world was a pretty strange one.

She made a lot of people and institutions very angry.

People had gone after her in the past. One theme of this book is that just because you're paranoid doesn't mean people aren't out to get you. In her final suicide note she was talking about her fear of the U.S. government listening to her phone conversations, opening her mail, and in our last conversation she said that people in the U.S. government, in high places, wouldn't be happy with what she was doing. I did a Freedom of Information Act request of the State Department, and there were nervous memos from the U.S. Embassy in Tokyo talking about how she was stirring up the vets who had been imprisoned by Japanese corporations in World War II to sue those corporations. But doing so would, in the view of the State Department, violate the treaty that our whole relationship with Japan is based on, so they weren't so happy about that.

And as we now know, our government is willing to do some pretty unexpected things when it feels threatened.

Yes. Adding to the whole atmosphere of paranoia or fear was that during this time the Patriot Act was in the headlines, and we were learning about the U.S. spying on people.

What was the most difficult part of the research?

The investigation of her mental health. For me the question was, "How am I different from her?" She was so perfect, and this happened to her. Why wouldn't it happen to me? It was scary to delve into the darkness of all the demons that were haunting her at the end of her life.

But you found that you're drastically different from her.

I am, but I'm not. At the core of what happened to her was bipolar disorder. It's not that I'm immune to depression, but I don't have this illness. Before it was almost like demons possessed her, and now I see there are a lot of things you can do to manage this diagnosis. She was not treated until weeks before she died. She was in denial until the end that she might have any kind of mental illness. It seems like the person becomes a different person, like they're possessed, mysterious, but now it seems less like demons and more like brain chemistry.

Stephanie Losee is co-author of the book "Office Mate: The Employee Handbook for Finding -- and Managing -- Romance on the Job". Her website is www.stephanielosee.com.