Will Amy Winehouse's self-destructive behavior make her a music legend -- or will it just kill her? 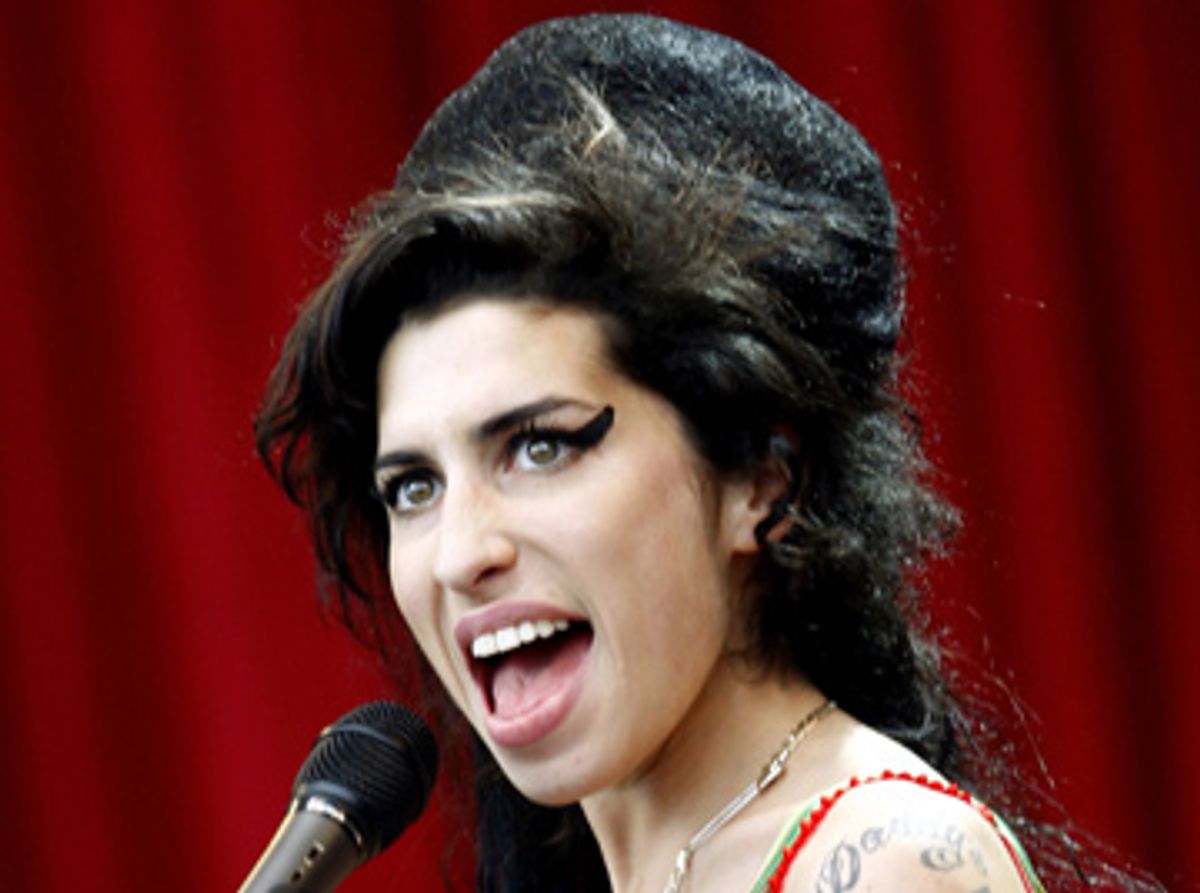 We're all expecting Amy Winehouse to die. It seems inevitable, given the ferocious soul singer's combination of youth, chutzpah, talent, substance abuse and bad taste in men. The diminutive vocalist has just received six Grammy nominations for her second album, "Back to Black," a set of Motown-influenced ballads of codependency, but her real-life struggles with drug abuse have almost become more newsworthy than her music.

In recent weeks, with the object of her codependency, husband Blake Fielder-Civil, imprisoned on an assault charge, the 24-year-old Winehouse's self-destructive behavior has made her a paparazzo's wet dream. She has canceled a slew of appearances, including an American tour, which is perhaps for the better, since she'd taken to berating her audience, forgetting lyrics -- and, some suspect, doing drugs onstage. (One recent photo shows a white substance in her nostrils.)

Offstage she's fared little better. Photos of Winehouse with a scar over one eyebrow and her toes bleeding through her dance shoes raised her audience's concern for her health, and last week, a photo of a barefoot, wincing Amy in a bra, traipsing down a frigid London street, signaled another low point in the downward spiral of the rising star. How low can she go? we ask, holding our breath.

Try to contextualize her nascent career and her appetite for self-destruction, and you'll see the ghosts of rock casualties float up -- especially those who got whacked by the reaper relatively early in their career: Janis Joplin. Kurt Cobain. Jimi Hendrix. But you'll also think of Pete Doherty, frontman for punk revivalists the Libertines and Babyshambles, who knows how to turn his fuck-ups into photo ops, writing a diary from jail, staging a crack binge for a promo pic. While Cobain might have referenced his depression by singing about its positive side (in the Nirvana song "Lithium,") Winehouse romanticizes her addictions, insisting that they're the wellspring of her creativity.

She may be a tragic talent, but she's also playing the part of the tragic talent. Her anti-recovery anthem "Rehab," written about the time when a former management company attempted an intervention -- she fired them for it -- invokes R&B singers Ray Charles, a fellow addict, and Donny Hathaway, who committed suicide at 33.

Despite the stagey, self-consciously retro pedestal that producer Mark Ronson has placed it on, Winehouse's frank, confessional songwriting and expressive contralto have convinced her audience that the most important part of her job isn't anything as crass as "making art" or "writing songs." Instead it appears that Winehouse merely sings her pain, the way Mary J. Blige claimed to do until she started singing about how she wasn't going to sing about her pain anymore. The artist who sings the blues without living the blues is no legend, and Winehouse is determined to achieve that status if it kills her, based on her reference points.

As the latest in a long tradition of Brits working in a black American idiom, Winehouse recognizes that otherness is part and parcel of the blues, but that her Jewishness is a liability -- play it up too much and you're perceived as an oddity, like Jewish reggae rapper Matisyahu. So, as Shel Silverstein once asked of an aspiring bluesman, "What do you do if you're young and white and Jewish ... and the only levee you know is the Levy who lives on the block?"

Winehouse answers that question by digging deep for scraps of authenticity. In addition to foregrounding her knowledge of R&B history in her lyrics, she mines her personal experiences for material, naming names, keeping those names in the news, and in the process, all but eliminates the barrier between biography and artistic expression, tabloid and Billboard. Only a complete novice could wonder what her songs mean, to which events they refer, or about whom they are written. Meanwhile, she acts out and "keeps it real" by defending her drug and alcohol addictions, and by standing by her jailed ne'er-do-well husband. The whole package smells like a bizarre simulation of a familiar black stereotype.

Which brings us back to that self-conscious retro thing. Because for all the real-life detail, hip-hop name checks, and off-the-cuff profanity Winehouse spills into her lyrics, not to mention her lifestyle, it's still hard to shake the sense of fakery, if not fuckery, as she'd sing it, involved in the whole enterprise, the nagging suspicion that Winehouse might really be Sarah Silverman in water-soluble tattoos, wacky eyeliner and a ratty hair-don't having another tasteless joke at our expense.

To turn your failures into pop songs is to make commodities of them -- which trivializes them a bit, no matter how sincerely you intended your audience to take them when you started out. The humor in "Rehab" lies in the mismatch between its infectious Motown beat, bright Stax horns, and its message of defiant dysfunction. Everybody dance to my misery, it seems to shout. By definition, you want to recover in recovery, but Winehouse joyfully declares her lack of interest in any treatment. Notably, she isn't critiquing the quasi-Christian methodology and terminology of 12-step programs or the agony of cold turkey, but the entire concept of getting over your jones.

A literal Jones -- Sharon Jones -- has also provided Winehouse with a backdrop suitable for her to play out her rhapsody in black. For the new record's backup band, Winehouse hired the Dap-Kings, known for backing Jones, a 51-year-old black American who finally received attention for reviving the funk idioms of yesteryear with her 2005 album "Naturally." Jones and the Dap-Kings sound like a band from the '70s in part because they lived through the '70s without changing their style, even after it became passé. Winehouse's newest release, however, required them to reach further back than their expertise -- to the '60s -- and the pastiche sounds as thick as Lauryn Hill's "Doo-Wop." Winehouse's "Tears Dry on Their Own," the most derivative song on "Back to Black," is the long-lost fraternal twin of Marvin Gaye and Tammi Terrell's "You're All I Need to Get By," and while all pop songs crib bits and pieces from familiar sources, Winehouse is almost as much of a magpie as Tricky, who turns samples into a personal signature. Her hip-hop potty mouth is the only clue that she hasn't discovered the secret of time travel.

Anxiety of influence fuels Winehouse's particular brand of blue-eyed soul, and soul bad-girl behavior, but the artifice of her persona may save her from taking her unfortunate muse too seriously. Of course, there's no guarantee that flirting with disaster won't kill her anyway. While 12-step groups suggest to struggling addicts, "Fake it till you make it," Winehouse's credo might be, "Fake it till you snuff it."

Even so, the truly out-of-control suicidal pop star, like Cobain or Ian Curtis of Joy Division, hurtles senselessly, unstoppably, toward self-annihilation. Curtis canceled Joy Division's first American tour by hanging himself. Winehouse canceled hers by calling off the dates. So there's hope. Tellingly, she claims to have written the bulk of "Back to Black" in a burst of creativity while separated from Fielder-Civil. Despite what her public image would lead us to believe, it takes hard work to spin your misery into Grammy-nominated gold. If she'd been truly incapacitated by her husband's absence, she wouldn't have written a damn thing.