Kitchen gadgets: Do you need an indoor herb garden?

Also, can you grow pot in the Aerogarden? Introducing Machinist's weeklong review of zany but cool kitchen gadgets. 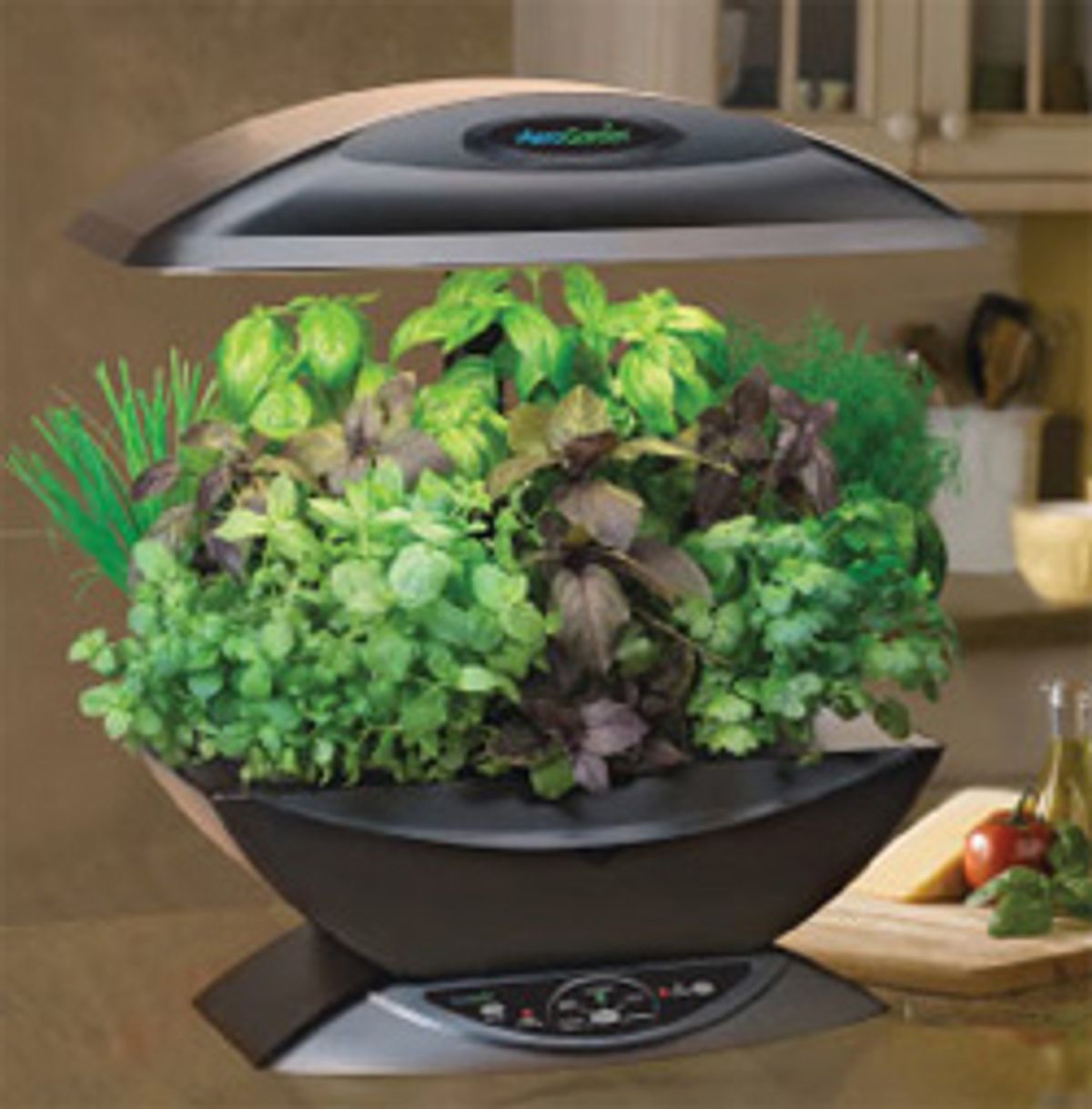 Today I kick off a pre-holiday week of Machinist reviews about a single sort of gadget: Things to use when cooking. To prepare this extravaganza, I pored through the season's catalogs and drew up a list of the half-dozen kitchen items that looked most novel, zany, preposterous and/or likely to change my (your) life immeasurably.

Near the top was today's featured gadget, the Aerogarden automated indoor garden. The Aerogarden, produced by a Colorado firm called Aerogrow, made its debut in the spring of 2006, and a few retailers, including Sur La Table, stocked it last holiday season. This year the thing's much more widely available, and though the company won't divulge sales numbers, it appears to be doing quite well on Amazon's bestseller list.

A few weeks ago Aerogrow sent me the Aerogarden Pro 100, a large, sleek, boat-shaped contraption that, when flipped on, emits a fluorescent glow that gives it the look of a prop from Woody Allen's "Sleeper."

The garden is composed of two parts: a base that houses the growing plants and a hood, attached to a flexible arm, that holds the grow lights. The garden does not grow ordinary seeds; instead one buys packs of specially prepared seed "pods" from Aerogrow. They come in a range of crops, including several varieties of herbs, tomatoes, chili peppers and salad greens.

Gardening is foolproof: Pop seven seed pods into the base, fill the garden with a gallon of water and Aerogrow's nutrient pills, and plug it in. The garden uses 60 watts of electricity, about as much juice as a desk lamp. Its grow lights and water pump cycle on and off according to a timer. Every two weeks, the Aerogarden reminds you to add more water and nutrient pills.

You'll have fresh herbs, vegetables or even flowers in a month or two. Aerogrow says that the harvest will last at least four months after that.

Do you need an indoor garden? Most likely the sentiment's not "need," not the way you need shelter, food, fair elections or "Super Mario Galaxy." Fresh herbs aren't any longer very tough to get; even in the dingiest of cities in the bleakest of climes, the nearest big-box market is likely to stock at least cilantro, flat-leaf parsley and basil, if not marjoram, chervil and savory.

That's the first line the skeptic brings to any discussion of the Aerogarden -- the device seems to fill a need you didn't really have. The second is this: It does so at much cost!

The Aerogarden sells for either $149.95 or $169.95 (The more expensive model is outfitted in stainless steel rather than plastic and includes a more advanced grow timer.) It ships with one seed kit; extra kits go for $19.95 each.

Thus, if you're buying fresh herbs from the store for $2 a bunch -- which, if you are, is too much -- you'll get at least 75 bunches for the price of this contraption. So why bother?

I ran this by John Thompson, Aerogrow's chief of investor relations, who has heard such questions before. His standard answer: There's a thrill in eating something you've grown yourself, in knowing where your food came from -- that it came from right over there, on your countertop, rather than from hundreds or thousands of miles away.

Thompson acknowledges that growing food in an Aerogarden is completely unlike growing food in a real garden. I "planted" my automated garden -- using a seed pack with seven kinds of basil from around the world -- in about 2 minutes' time. The garden contains no soil, requires no digging, demands no experience or expertise with fertilizer, rainfall, sunlight or the other myriad factors real gardeners must consider. If you like thinking about these things -- if anticipating and working out the whims of nature is, to you, magical, the very soul of gardening -- you'll be disappointed by the clinical experience of the Aerogarden.

There is, though, another kind of magic here -- the magic of perfection. The base of the Aerogarden is a precisely engineered growing machine, one that suffuses plants' roots in gasses rich in moisture and nutrients; the plants grow "aeroponically," meaning that rather than being embedded in soil, their roots draw their nutrients from the misty air, as in a rain forest, and consequently grow extremely fast. Aerogrow's nutrient tablets, which are specifically tailored to each seed kit, are equally remarkable. The company developed them to release their chemicals over time, and to work in water from municipal sources around the country, regardless of the water's acidity or additives.

The system results in plants grown to robotic precision. I put my Aerogarden in a sunless spot in my house (behind a couch), but my seven varieties of basil sprouted in a matter of days, without a hitch, and without any work from me. Not that I didn't notice the machine going -- the Aerogarden's lights are quite bright and its pump produces the sound of a dripping faucet (I suggest not placing it in a room where you sleep). But I didn't much mind the sound. Looking at the machine every morning, I've felt mainly proud -- undeservedly so -- at my quick-growing crop.

Though online reports suggest a few problem plants (cilantro, for instance) sometimes fail to germinate -- Aerogrow will replace the seeds if that happens -- the Aerogarden is very likely to result in a bonanza harvest, virtually guaranteed to better your urban gardening efforts. You can be sure, says Thompson, that if you plant a basil seed kit, you'll get a boatload of basil; he estimates $150 worth over six months, which is kind of like the machine paying for itself.

Readers might wonder about another way to make back the Aerogarden's cost: Will the thing work for that other very popular, expensive herb, the one that, out of legal necessity, people have long been trying to grow indoors?

"I can't go anywhere and talk about the Aerogarden without people saying, 'Hehehehe, you're going to grow marijuana!'" says Thompson.

But though the Web abounds with stories of people trying to use the system for that purpose, results aren't clear. Thompson notes that marijuana plants grow much taller than the machine, so pot growers wouldn't likely find much use for it. (Difficulties arising out of my parole status precluded my own thorough inquiry into these features.)

My Aerogarden's basil is just about two and a half weeks old. The buds are now about 2 inches tall -- not quite far along, yet, for a full appraisal of the crop. In the coming weeks, I'll update readers on their progress, and the taste.

Yesterday I pinched off a tiny leaf of one of the varieties -- called "globe basil" -- and, without washing it, put it in my mouth. It tasted like basil.