Did Emerson and the American transcendentalists transform society or merely sow the seeds of American individualism? 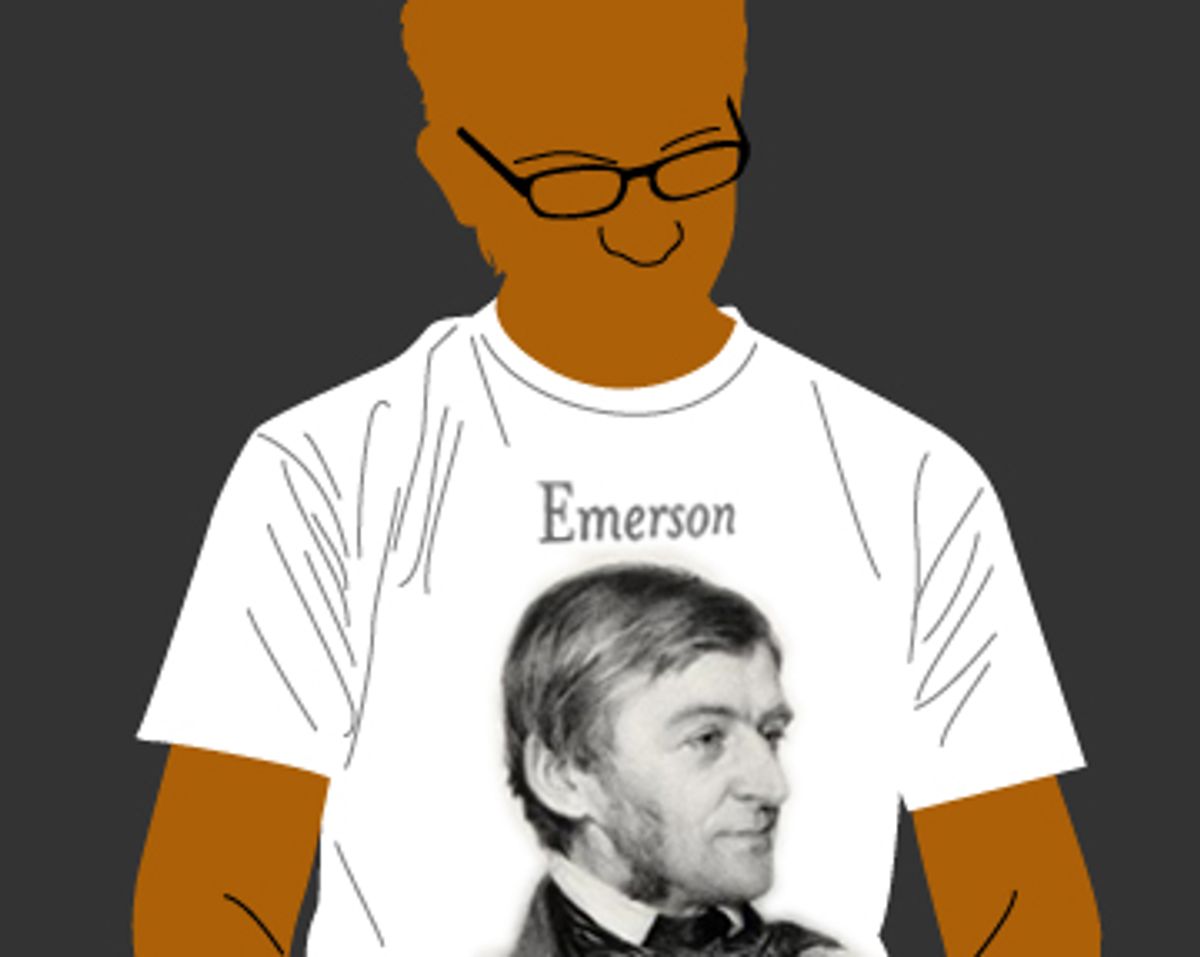 Philip Gura's "American Transcendentalism" is partly an elucidation of what Transcendentalists believed, but mostly it is an explanation of why what they believed is so hard to pin down. According to Gura, the movement was profoundly divided almost as soon as it began, and while he doesn't go so far as to draw the comparison himself, its resemblance to more recent would-be revolutions in the 1960s and '70s is conspicuous. While Transcendentalists agreed that contemporary life as they knew it had to change, they split over whether that transformation should begin deep inside each person's soul or in the drastic reform of the society in which the soul lived. Transcendentalists went back to the land and formed utopian communities. They organized protest marches and worked on themselves. They were filled with a particularly American form of optimism, and subject to a very familiar type of discouragement. Their problems and preoccupations are still with us today.

It all began in the early 1800s with arguments about religion and Rationalism. As Gura points out, "most Transcendentalists were indeed New Englanders, with ties to Harvard College and the Boston area [and] at some point in their lives and almost to a person they had all been associated with Unitarianism." The Unitarians were liberal Christians who stood opposed to the more orthodox Protestants, and at the time were best distinguished as believers in a faith that arose from reason. They embraced the empirical philosophy of the Enlightenment, especially that of John Locke, as opposed to the harsh tenets of Calvinism; they also mistrusted the emotional calling of Puritan revivalists like the charismatic 18th-century preacher Jonathan Edwards.

Transcendentalism arose among disaffected Unitarians -- theologians and other thinkers who rejected orthodoxy but craved a less coldblooded version of liberal Christianity. The most famous and revered Transcendentalist, Ralph Waldo Emerson, was a Unitarian minister turned professional lecturer and essayist who countered the "materialist" Enlightenment reliance on "facts, on history, on the force of circumstances and the animal wants of men" with a spirituality rooted in intuition. The Transcendentalist view of truth, Emerson wrote, was founded on "the power of Thought and on Will, on inspiration, on miracle, on individual culture," by which he meant the cultivation of the self: "mind is the only reality."

Every New Age guru who urges you to "listen to your heart" or insists that we create our own reality (à la the current bestseller "The Secret") is the degraded, mutant progeny of Transcendentalism and its belief that we each contain an inner compass that, if we only learn to attend to it properly, will always lead us to the best course. But the Transcendentalists also have something in common with today's evolutionary anthropologists who think that basic concepts of right and wrong are hard-wired into the human mind. The Transcendentalists' studies of comparative religion led to their belief in an innate morality. (However, the Transcendentalists, emerging before Darwin, thought God -- or Emerson's "Over-Soul" -- was responsible for this, rather than natural selection.)

The first (and, unfortunately, the driest) chapters in "American Transcendentalism" trace the intellectual roots of the movement -- which Gura describes as "a way of perceiving the world," rather than a philosophy -- in German Idealism (a philosophical school) and biblical scholarship. The beginning of the 19th century, like the beginning of the 21st, was marked by a keen interest in the history of Christian scripture. Just how historically accurate was the Bible? How was it assembled, exactly, and by whom? What are the meanings of its many inconsistencies and contradictions? Can it really be regarded as the inerrant, revealed word of God?

For the first time, scholars had begun to insist that some parts of the Bible had to be regarded as historical accidents, the result of filtering divine truth through the flawed, culturally blinkered minds of mere human beings. If we can't take everything we read in the Bible literally, though, then how can we discern what God was really trying to communicate to us? Where Enlightenment theologians relied on deductive reasoning to figure this out, Transcendentalists preferred, like all Romantics, to trust in feeling. Our purest emotional responses -- provided they are properly cultivated, according to Emerson's recommendations -- tell us what we need to know. The Transcendentalists took the fact that most world religions can be boiled down to remarkably similar codes of moral law as further validation of this belief.

But where Emerson advocated a life of withdrawal and contemplation, the better to tune one's ears to the still, small voice within, other Transcendentalists (and fellow travelers) heard that voice telling them to make the world a better place. What both sides of this divide objected to was pretty similar -- the materialistic, status-conscious ruthlessness of life under the reign of industrial capitalism. The American promise of a better, fairer society had devolved, in the words of Transcendentalist minister and publisher George Ripley, into "the inordinate pursuit, the extravagant worship of wealth," rife with "temptations to an excess of selfishness." Transcendentalism offered the spiritual equivalent of political democracy, with each person empowered to find his or her own direct connection to the divine. But in order for everyone to avail themselves of this freedom, the more activist Transcendentalists felt, the inequities of 19th-century society had to be fixed.

Transcendentalist clergymen like Ripley, Orestes Brownson and Theodore Parker ministered to poor, urban populations and called for workers' rights and sometimes even socialism. They fulminated against the Mexican War from their pulpits. Margaret Fuller, who began on the aesthetic, self-reflective side of the movement with Emerson, became a champion for women's rights and social reforms after she began to write for Horace Greeley's progressive newspaper, the New York Tribune. Eventually, though, a single cause came to command the full attention of every champion of social justice: slavery and its abolition. Even Emerson, a skeptic about the efficacy of activism as a method for raising consciousness, became an outspoken abolitionist.

Gura is a professor of American literature at the University of North Carolina at Chapel Hill, and like most American academics these days, he regards political activism as the consummate virtue. Although he's low-key about it, it's still clear that he endorses Brownson's worry that Emerson's approach to Transcendentalism too easily slips into a "system of pure egotism" and self-regard -- much as the consciousness raising of the late 1960s morphed into the so-called Me Decade of the late 1970s. And it's impossible to argue with this position when it comes to abolitionism; slavery was such a clear, present and overwhelming evil in the mid-19th century that eliminating it ought to have been the priority of every principled American.

But eradicating a manifest injustice -- be it slavery, the Vietnam War or racial segregation -- is one thing. Engineering a new social order in which everyone can fulfill his or her potential is something else again. Ripley discovered this when, in the 1840s, he established Brook Farm, in Massachusetts, a utopian experiment in communal living inspired in part by the socialist ideas of the French thinker Charles Fourier. Ripley hoped to create "a society of liberal, intelligent, and cultivated persons" by "providing all with labor, adapted to their tastes and talents, and securing to them the fruits of their industry." Although no one would be compelled to do any particular job, members were supposed to contribute labor in exchange for their board, and were granted food, shelter, education and medical care.

Brook Farm soon ran into troubles of a sort that will be all too familiar to veterans of similarly idealistic communities from the '60s and '70s. Not enough people engaged in the agricultural labor that was supposed to provide the farm's financial support, and the sole profit center -- a boarding school -- brought in people who were not full subscribers to the community's ideals. When Ripley made an effort to recruit more artisans and laborers, they complained of snooty treatment from the members with middle-class backgrounds. Then there was the drama -- which is how I interpret Ripley's wife's lament that too many members delighted in "impertinently prying into their own emotions, or intoxicating themselves with the excited emotions of others." How long the experiment would have continued had the farm not been bankrupted by a fire in 1847 is anybody's guess.

Emerson steadfastly resisted Ripley's efforts to lure him to Brook Farm, politely demurring that he could not "put on your community the task for my emancipation which I ought to undertake myself." Gura attributes this choice to Emerson's general obliviousness with regard to the "plight of labor" and other social issues -- that is, to the injustices that had inspired Ripley to try to start over from scratch. "To allow household domestics to dine with the family, as Emerson now did, would not cure Boston's social ills," Gura drily observes. On the other hand, neither did Brook Farm, and despite the fire and the poor soil on which its agricultural failures were blamed, there's not much reason to think it ever would have.

This was the puzzle that the Transcendentalists faced: It is hard to remake a human being without also changing the society around him, but it is even harder to change a society when the human beings in it remain their old, recalcitrant selves. (I might also add that the sort of people attracted to utopian social experiments -- rebellious, quixotic and independent -- make the worst possible candidates for schemes that require a lot of cooperation and compromise.) Emerson, and his erstwhile protégé Thoreau (who Gura regards as "an apprentice in the movement," rather than a full-fledged Transcendentalist) preferred to step away from society. Thoreau found a way to make a cause out of this withdrawal, refusing to pay taxes that might go to support the Mexican War and writing his famous essay "Civil Disobedience." The more ambitious Ripley, no doubt with the weary exasperation common in ex-utopians, wound up abandoning both pulpit and farm to work for Greeley's New York Tribune, settling for the lowly fate of professional book reviewer.

We have not solved this riddle yet, and Gura quietly mourns the "other half of the Transcendentalist's dream, of a common humanity committed to social justice." Instead, he writes, "individualism" has triumphed, "in the Gilded Age and beyond." Some of us have even managed to convince ourselves that individualism is the only viable route to social justice, sharing Emerson's faith in self-reliance as the consummate virtue. Whether they are as mistaken in that belief as George Ripley was in his, remains to be seen; here's hoping it results in nothing worse than a bankrupt farm.