After a close-up of her face appeared on the Drudge Report, Hillary Clinton was found guilty of -- horrors! -- aging. 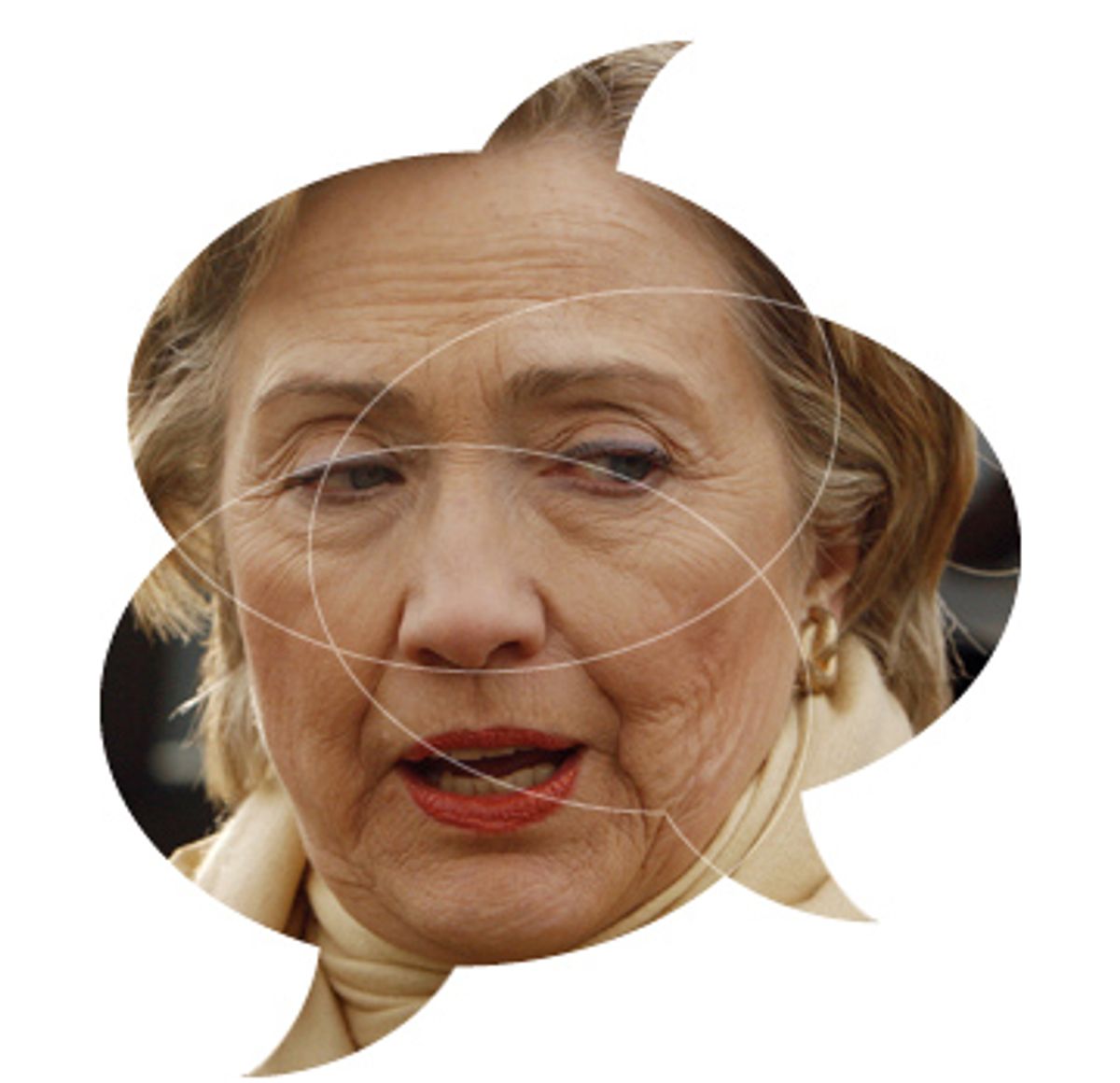 Back in college, an urban legend made the rounds during sorority rush. Supposedly, those hopeful freshmen who received bids from the best and shiniest house, where the standards for social, academic and physical perfection were high, would be asked, as part of the hazing process, to stand on a coffee table in underwear while the older sisters circled their physical flaws in purple magic marker. The remarkable thing about this myth, in my memory, was not the self-hating body-dysmorphia social-torture aspect of it (yawn), but the fact that the ritual was consistently presented as something done for the good of the initiates. Before they were allowed to represent the sorority, these women needed to get rid of any distracting blemishes, lest their pocks and pimples distract potential friends, lovers or professors from all the excellent qualities they had to offer.

That piece of girl-apocrypha came back to me this week as I read story after story about an unflattering photograph of Hillary Clinton posted on Monday by Matt Drudge above the tag line "The Toll of the Campaign," and picked up by Rush Limbaugh, whose thoughts were printed under the less felicitous heading "Does Our Looks-Obsessed Culture Want to Stare at an Aging Woman?"

The photo, taken at the start of the final, grinding slog through Iowa, less than three weeks before the caucuses there, is simply of Clinton's face. She's wearing a camel coat, a cream scarf, and gold earrings. So what the hell, let's take out the purple magic markers: The image of Clinton shows her with crow's-feet, bags under her eyes, and a furrowed brow (count me among those surprised to see any candidate's brow crease in this artificially paralyzed age). There are deep naso-labial folds, laugh lines; she looks a little jowly; her skin's papery, her foundation and lipstick appear caked, possibly from the cold. Also, some of her neck skin has been pushed up around her chin thanks to the unfortunate convergence of talking and scarf-wearing that is, alas, unavoidable when you're campaigning for president. In Iowa. In December.

That pretty much covers it, though I'm sure many eagle-eyed readers will spot aesthetic shortcomings that have escaped my attention. What do all these circled imperfections tell us about the way Hillary Clinton will represent us at the next Delt Formal?

Limbaugh's take is couched in the same oleaginous "Who me?" insincerity with which Bill Shaheen speculated about how "Republicans" might question whether Barack Obama sold cocaine. It's called concerned trolling. Limbaugh told his 14 million listeners that it was only because of all those poor American women "starving themselves trying to get into size zero," and how "as you age -- and ... women are hardest hit on this ... America loses interest in you" that he was wondering, "Will this country want to actually watch a woman get older before their eyes on a daily basis?" Yes, it's true. If we elect a woman to highest office, we will be forced to watch her get older on a daily basis. Like a science experiment where you grow mold on a piece of bread and watch it get greener and uglier every day? (And incidentally, is it true that every time a female wrinkles, an angel gets its wings?)

Limbaugh sounded like the Alpha Sigma Sigma chapter president as he summed up, "The appearance of perfection and good health; all of that ties into the perception of mental acuity, stamina, being able to hold up to the job."

But the pundit was downright generous compared to blogger Immodest Proposals, who declared the shot "the most significant photo taken in the year 2007," arguing that "whichever photog snapped this photo effectively ended Sen. Hillary Clinton's presidential campaign." Blogger Ann Althouse wrote that her first reaction was "simple disbelief," wondering "Did some treatment wear off?" before acknowledging that "a picture like this of a male candidate would barely register. Fred Thompson always looks this bad, and people seem to think he's handsome."

Now, in truth, the physical appearance of men gets its fair share of negative attention. Yes, there was a controversy over whether or not John Kerry had Botox injections in 2004. Yes, emasculating photos like the one of Michael Dukakis in a tank and ill-fitting military chapeau have been disseminated for our amusement. Yes, we have chuckled over photos of George Bush looking asinine. (Remember the one of the pardoned turkey pecking around the president's package?) But the stench of the criticism Hillary's image has elicited is undeniably different and frankly harsher: She's not being foolish here; she's not dressed up in a silly outfit; she's not even making a ludicrous face. She is getting pulled over for campaigning while female.

Hillary Clinton is 60 years old. In an age of lifts and injections and implants, we are beginning to forget what 60 years old looks like in nature. But as the daughter of a very beautiful woman who turned 64 on Tuesday, I can tell you that without intervention, it involves wrinkles and grooves, valleys worn deep by years of laughing and talking and furrowing a brow and reading in bad light and yelling at children.

Sixty years on a man looks similar, and a cursory examination of former presidential candidates at critical, exhausting stretches of a race would turn up pallor, flappy necks and dry skin. In the weeks before Bill Clinton (one of our youngest candidates ever, and thus one of our least pruney) was elected, he lost his voice. It was regarded as a mark of how hard he'd been working, how many sleepless nights and stump speeches and greetings, how many germy hands he'd clasped. And we've all seen what years in the Oval Office do to a candidate: From Abraham Lincoln to Bill Clinton to George W, there is ample evidence that being president is not a job for anti-aging enthusiasts.

Hillary Clinton this week is performing a tour of all of Iowa's 99 counties in five days. She and her compatriots have been running for president -- in this campaign without beginning and seemingly without end -- for a year. Right now she is fighting desperately to win the chance to spend another year out there, sleeping in hotels and eating pie at every truck stop in the Midwest. It would be much more suspect if she did not look knackered.

None of us are above thinking about how Clinton looks and sounds and what she wears. We are like babies first encountering a new object: a potential president who has breasts and hips and who was once pregnant and whose female skin has changed as it aged. Before the furor about this photograph, I projected my own hang-ups about Clinton's physicality, hang-ups I did not apply to her fellow male candidates. I was sure that she had had work done. In the debates, her forehead looks suspiciously placid, her skin improbably smooth, her brow unnaturally high and her cheeks borrowed from Renée Zellweger. And while I found the John Kerry Botox story hilarious, I didn't find it at all funny to imagine Clinton faking youth, for reasons no loftier than those of the sorority sisters who didn't want their young initiates walking around campus with cellulite on their asses: I didn't want a woman who represented me to walk around with botulism in her face or staples in her forehead.

Hillary Clinton's role on the American stage is exceptional, it's original, it's a first. So we're all staring at her and listening to her and reading meaning into her appearance, her clothes, her tone. This summer, the Washington Post's Robin Givhan wrote a piece about a shirt the senator wore that revealed that she was the possessor of secondary sexual characteristics. In July, there was a kerfuffle over Clinton's fake laugh; a cackle, it was called. Critics made a lot of Clinton's false mirth, a tactic deployed for centuries by politicians trying to curry favor and buy time before answering hard questions, because its register -- high-pitched, female -- is unfamiliar. We're used to hearing old men chuckle long and deep while fielding questions from Tim Russert. A woman's voice sounds different; different in a way we think of not as old-man comfy and authoritative but as old-woman witchy and croney.

It's the same with her wrinkles, no different, really, from the rifts and crags and under-eye pouches found on all tired politicians. But these happen to be sags and bags on a face we expect to be smooth and delicate because it is female, and because we expect visible femininity to be young or artificially preserved or lit well by movie cameras. The scuffle over this photo should demonstrate to any disbelievers that unadulterated female features are usually kept invisible from the American public after the age of 45 or so.

It's undoubtedly boring and hackneyed and feminaz-y to suggest that a woman in the public eye cannot win. But it's also difficult to conclude anything different as we watch the way that Clinton is alternately sexualized and then transformed into an ugly succubus of shriveled power as this race unfolds. No wonder she's a little puffy.

When people talk about what it might feel like to have a female candidate for president, a prospect that we may be weeks away from seeing made real, I often wonder what they imagine it will be like: Will there be women marching arm and arm through the streets? Will we encounter pundits pondering whether she has the intellectual acuity and a tough enough presence on the world stage? Maybe there will be lots of political cartoons showing her eating Häagen-Dazs and wearing Manolo Blahniks.

Personally, I fear that having a woman running for president will look and feel like what we've seen this week -- pictures of wattles and saddlebags and ill-conceived wardrobe choices that are notable because they are exceptional, because we've never seen these features on the stump and because we want to point and laugh.

Of course, she's not alone in her singularity. Just consider what one of her supporters, Bob Kerrey, took pains to notice earlier this week: that her opponent Barack Obama's middle name is Hussein, and that his father and paternal grandmother were Muslims. They may not be wrinkles, but these are qualities that make some Americans uneasy, and they're qualities that stem directly from Obama's difference from the other candidates.

And so perhaps, as we leave 2007, on the precipice of a new world in which we might make thrilling history by electing the first female or African-American president, we should consider the signs that suggest that we haven't quite earned our grown-up voter stripes yet. Maybe our intolerance for anything other than pink-cheeked perfection will leave us only with the well-shellacked John Edwards: bright, white and wrinkle-free.