The fuel on the hill

President Bush signed a new energy bill Wednesday, betting the farm that corn ethanol is the best alternative fuel for the future. It isn't. 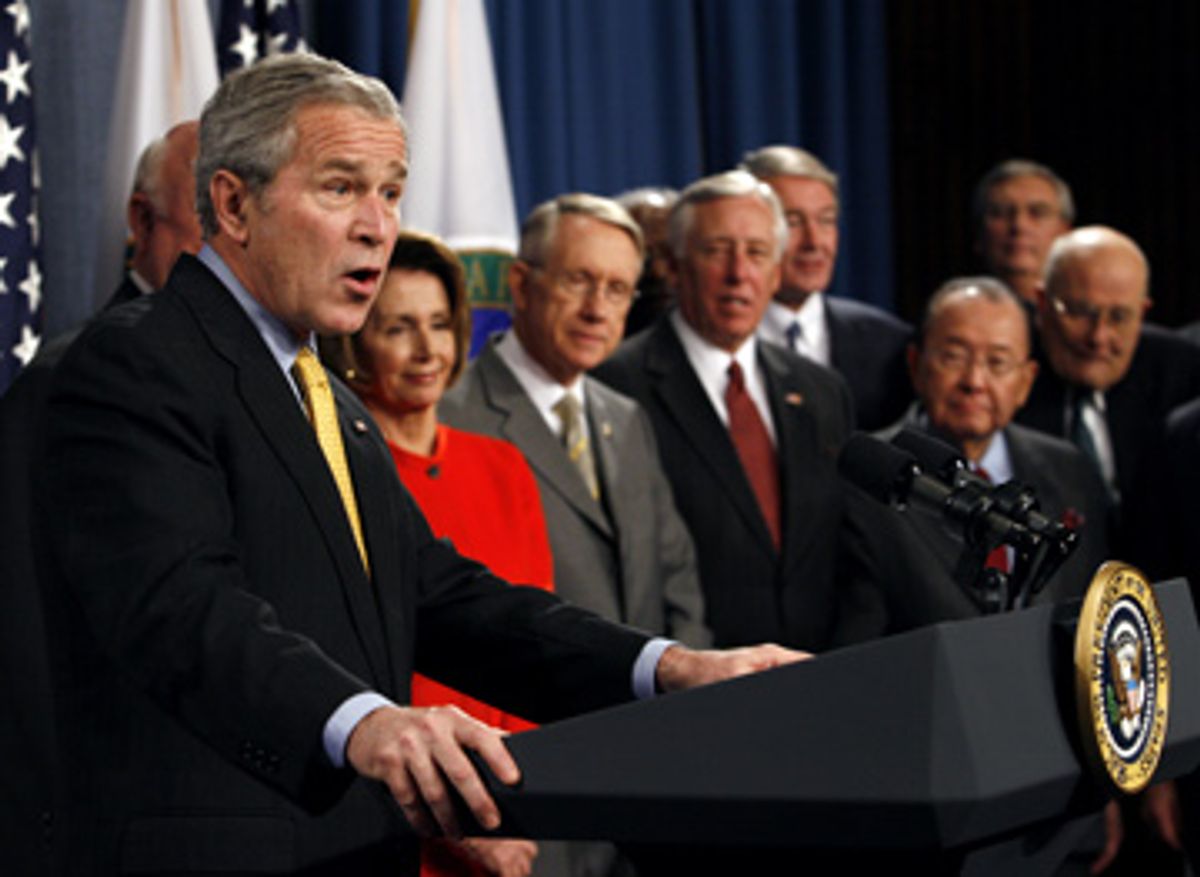 We have run out of time to dawdle on global warming. We will need to make deep cuts -- 60 percent to 80 percent -- in carbon-dioxide emissions over the next few decades in every sector of the economy. The toughest sector may be transportation, given the remarkable convenience of liquid fossil fuels and our love affair with cars. Every year, Americans travel some 3 trillion vehicle miles. We consume about 140 billion gallons of gasoline along with 40 billion gallons of diesel.

President Bush signed a new energy bill Wednesday that raises the fuel-efficiency standard for new auto fleets to 35 mpg by 2020, a 40 percent increase from today's 25 mpg. That's a useful start. But to achieve the deep emissions cuts, we will ultimately need much higher standards, coupled with an alternative fuel with low greenhouse gas emissions. The energy bill mandates that the U.S. increase the use of renewable fuels to 36 billion gallons by 2022, of which 15 billion can be corn-based ethanol. Bush is betting the farm that the best alternative fuel for the foreseeable future is corn ethanol. It isn't.

For decades, the country has been pursuing alternatives to petroleum-based fuels without much success. In 2005, 97 percent of vehicle fuel was gasoline or diesel. Most of the rest was ethanol, also known as drinking alcohol, which can be blended directly into gasoline. Fermenting corn provided the overwhelming majority of the 2.8 billion gallons of ethanol used in 2005. The second biggest alternative fuel is MTBE (methyl tertiary-butyl ether), but because it has been found to pollute groundwater, it is rapidly being replaced by corn ethanol. Ethanol use doubled from 2001 to 2005.

In the Energy Policy Act of 2005 -- a rather lame collection of giveaways to the energy industry -- Bush and the Republican Congress tripled the mandated biofuel requirement to 7.5 billion gallons by 2012. Again, corn ethanol is the only plausible biofuel that can meet the vast majority of that target. Also helping corn ethanol are the huge subsidies the industry gets and a large tariff that keeps out Brazilian ethanol made from sugar -- ironically the one food-based ethanol that is a big reducer of greenhouse gases compared with gasoline.

Unfortunately, most biofuels are not a realistic climate solution for one simple reason: Biofuels from most food crops or from newly deforested lands do not provide a significant net decrease in greenhouse gas emissions -- and some may cause a net increase. Most life-cycle analyses show that corn ethanol has little or no net greenhouse gas benefit compared with gasoline because so much energy is consumed to grow and process the corn.

In fact, recent research, led by Nobel laureate Paul Crutzen, found that corn ethanol might generate up to 50 percent more greenhouse gases than gasoline, when you account for the extra emissions of nitrous oxide, a potent greenhouse gas, from increased use of artificial fertilizer. That same study found that the favorite biofuel worldwide, biodiesel from rapeseed, releases up to 70 percent higher total greenhouse gas than regular diesel.

As for developing countries, "Biofuels are rapidly becoming the main cause of deforestation in countries like Indonesia, Malaysia and Brazil," explains Simone Lovera, managing coordinator of the Global Forest Coalition. In part because of the burning of forests to clear land for palm oil production, Indonesia has become the world's third-leading producer of carbon emissions!

It is also worth noting that ethanol is not a clear win for local air quality, either. The Environmental Protection Agency concluded earlier this year that "ozone levels generally increase with increased ethanol use."

Then there's water. Typical ethanol plants consume 4 to 5 gallons of water per gallon of ethanol produced. That doesn't even count the water used to grow the crops, or the groundwater that is polluted by pesticide runoff. No wonder a recent National Research Council report found that if ethanol production keeps growing, "the effect on water quality could be considerable, and water supply problems could develop." This issue is especially problematic given that global warming is projected to reduce water resources over large parts of the globe, from both climate-change-induced drought and the melting of inland glaciers that feed so many of the world's rivers. China has stopped new biofuel plants from using corn in part because of water concerns.

And then there's food prices. As biofuel mandates drive up the demand for corn and soy, the prices of those food crops shoot up, making them -- and all their derivatives, like corn syrup and animal feed -- much more expensive. The higher price leads farmers to grow corn and soy in place of crops like wheat, whose prices then rise as supply drops in the face of growing demand.

One quarter -- and climbing -- of the U.S. corn crop is now being used for biofuels. In a recent article, "The End of Cheap Food," the Economist points out that its measure of average world food prices is "higher today than at any time since it was created in 1845." In just the past two years, food prices have jumped 75 percent in real terms. Some of this jump is due to changing diet from increased wealth, especially in Asia, which leads to a rise in meat use, and a rise in the price of grain for feed. That said, the Economist points out the amazing statistic that "the demands of America's ethanol program alone account for over half the world's unmet need for cereals." No wonder the magazine editorializes that the price rise is "the self-inflicted result of America's reckless ethanol subsidies."

We have met the enemy and he is us.

Why is anyone interested in biofuels at all? Back in the 1990s, there was a lot of excitement at the Department of Energy's office of energy efficiency and renewable energy (and elsewhere) about the prospect of low-greenhouse-gas-emitting ethanol from cellulosic sources, such as crop waste and dedicated low-impact crops like switchgrass. The department devoted considerable research dollars to making cellulosic ethanol practical. I remain a big proponent of such research, and also reemergent sources of potentially low-greenhouse-gas biodiesel, such as micro algae.

We still have a way to go. The first commercial cellulosic ethanol plant in the United States had its groundbreaking last month. The U.S. Department of Agriculture's Economic Research Service said in September: "Although cellulosic-based production of renewable fuels holds some longer-term promise, much research is needed to make it commercially economical and expand beyond the 250-million-gallon minimum specified for 2013 in the Energy Policy Act of 2005."

When I was at the Department of Energy in the '90s, our answer to the question, "How much corn ethanol should we produce?" was "Whatever is the bare minimum needed to jump-start the transition to cellulosic ethanol." We are now way past that minimum. Yet for all the havoc our current biofuel use is having on national and global food prices, ethanol use must, by law, increase to 7.5 billion gallons by 2012, a jump of some 50 percent from current levels.

Regardless, cellulosic ethanol remains promising; unlike corn ethanol, it could be a significant part of the effort to cut transportation emissions 60 to 80 percent by 2050. But the promise has gotten ahead of the reality. Who knows if we can produce anywhere near 21 billion gallons by 2022? To meet the overall target, we're certainly going to have to max out on corn ethanol. Yet our current level of corn ethanol production is already hitting the national and global food market with hurricane force winds. And we're going to triple consumption in 15 years?

President Bush famously said in his 2006 State of the Union address that "we have a serious problem: America is addicted to oil." And yet one of the signs of addiction is not knowing when to stop. Now Bush has pushed the entire country toward a national addiction to alcohol.