Clinton haters who think the Illinois senator can beat Hillary support him now, but their affection will fade if he gets the nomination. 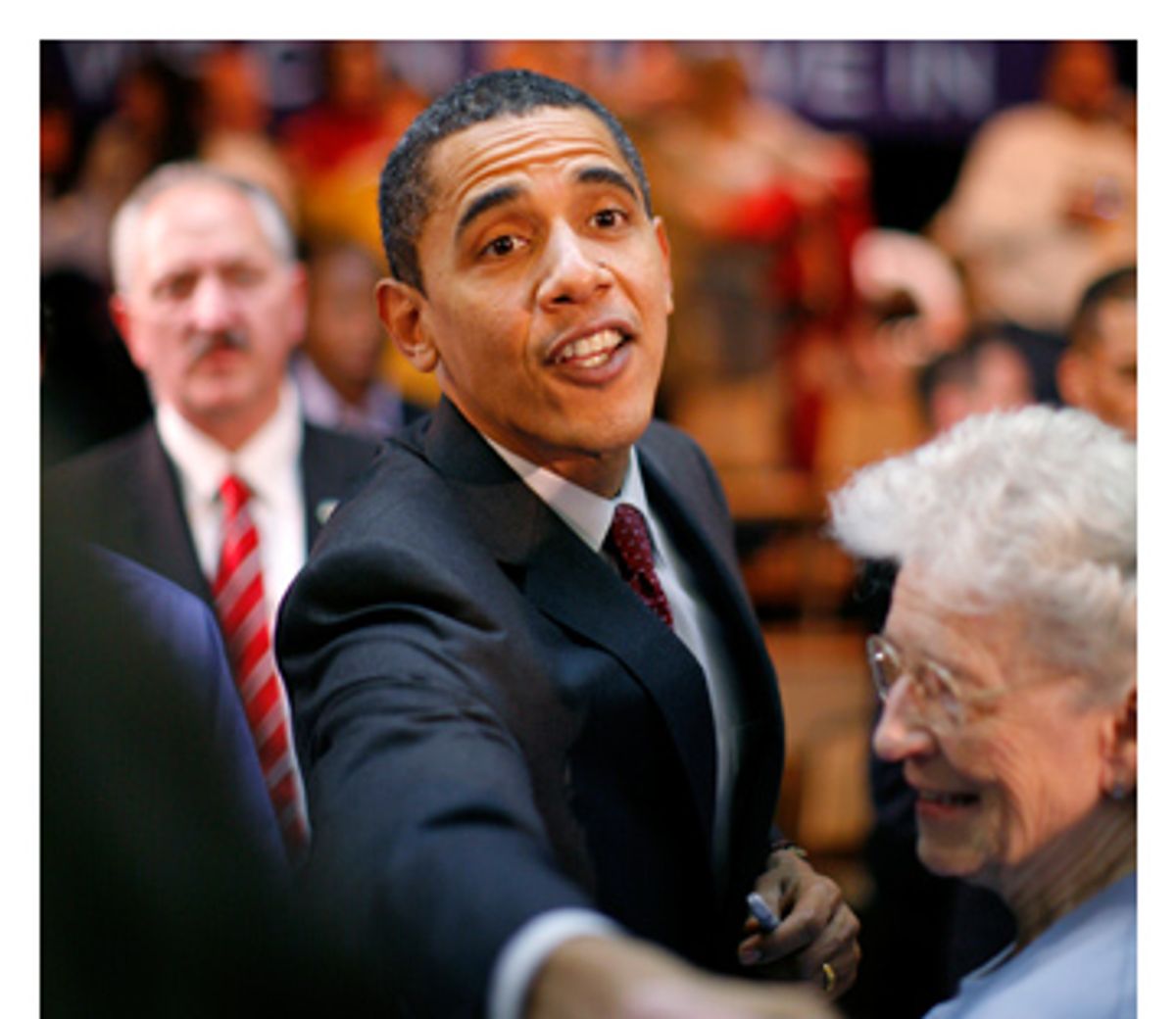 In the weeks since Karl Rove offered his unsolicited advice on how to defeat Hillary Clinton in the pages of the Financial Times, right-wing expressions of support for Barack Obama have become increasingly conspicuous and voluble. Although often couched in high-flown moral terms that accept the Illinois senator's definition of himself as a fresh and unsullied figure, his Republican endorsers cannot quite conceal their underlying animus.

They hate Hillary Clinton and they think he just might be able to beat her.

Exactly why the American right hates the Clintons so fervidly remains a subject of debate among both political scientists and psychiatrists, but the persistence of those emotions is beyond dispute, especially among commentators and activists with little actual exposure to Hillary Clinton herself. (Evidently her conservative colleagues in the Senate have developed warmer feelings for the first lady they once demonized, but that's another topic.) So powerful is their fury that they will not hesitate to promote the career of a liberal black politician whose background and religious affiliation they regard with suspicion. Of course, they're also quite confident that they can bring him down later, too.

For the moment, at least, he is their shining hero. That is why the Weekly Standard ran a cover story in early December that provided a swooning rehash of Obama's life story and a series of masterful scenes from the campaign trail. ("He sounds like a man who knows what he's talking about and knows what he wants to do. There are no questions that catch him off guard, no issues he hasn't considered.") Written by Stephen Hayes, the admiring biographer of Dick Cheney and perhaps the last journalist on earth who still believes that Saddam Hussein was allied with al-Qaida, the flattering Obama profile raises none of the expected concerns over his eagerness to negotiate with the Iranians and other enemies of democracy. Why spoil the moment?

The wind behind that Hayes puff blew up into a bilious gust last week when William Kristol endorsed Obama in an editorial titled "Time to Move On ... From Hillary," urging Democrats to prevent the return of the Clintons to the center stage of American politics. He worked himself up into a lather of fake indignation over the clumsy attacks on Obama in recent days by Bill Shaheen, Bob Kerrey and Mark Penn. So did George Will, whose column excoriating Hillary Clinton invoked a very tired comparison with Nixon.

Evidently Will and Kristol assume that everyone has forgotten their own movement's penchant for filth during the Clinton White House years. Back then there was no limit to the jeering, lying assaults on the Clintons and everyone around them, including their young daughter. It was a poisonous atmosphere to which the likes of Kristol and Will contributed much pollution. For them, Obama's clean image is merely another weapon to be deployed.

Naturally, the impulse to promote Hillary's nemesis has often conflicted with an irrepressible urge to bludgeon him. How could excitable right-wingers restrain themselves from mugging an African-American politician with that surname, let alone his middle name? The answer is that they couldn't restrain themselves at all, as radio hooligan Rush Limbaugh has proved several times over the past year, beginning with his musical mockery of Obama as "the magic Negro," proceeding weeks later to a chanted repetition of "Obama Osama, Osama Obama." At one point, Limbaugh even claimed credit for making Obama "blacker," which the radio host openly said he hoped would help him attract African-American votes away from Clinton.

Obviously none of this is Obama's fault, nor does it reflect poorly on him in any way. So far his campaign has judiciously refrained from exploiting the right's flirtation with him, even though he occasionally echoes conservative themes in his criticism of Clinton. It is true, moreover, that some Republicans and conservatives who will forever despise her find him attractive on his own merits.

But nobody should imagine that the right-wing media whose voices now praise Obama will continue to do so if he wins the Democratic nomination, or that the mainstream media, which still takes so many cues from the right, will do likewise. The conservative movement's affection for any Democrat is always fickle and flimsy. Its assessment of any black Democrat, let alone a presidential nominee, is more likely to reflect the bigoted crudeness of Limbaugh than the manufactured erudition of Will. (And we can expect to see many more cartoons like this one.)

Should Obama hope to continue to enjoy his free ride, he should consult his old mentor Joe Lieberman, the senator from Connecticut who used to be a Democrat. Conservative commentators and right-wing media outlets always loved Lieberman for his willingness to echo their talking points on subjects such as school vouchers and Social Security privatization. When he agreed to join the Democratic ticket as Al Gore's running mate in 2000, the Weekly Standard and the National Review, among others, suddenly discovered how despicable Lieberman actually was. Having abandoned the Democrats altogether, he is now fully rehabilitated.

But Obama and his supporters must cherish no illusions about what will happen to him if he vanquishes Clinton. He will need the same kind of armor that she has worn proudly for years. What the right likes best about him is that he doesn't seem to own any.