Tim Burton's cinematic take on Stephen Sondheim's ultra-dark stage musical is about as satisfying as a tasteless meat pie. 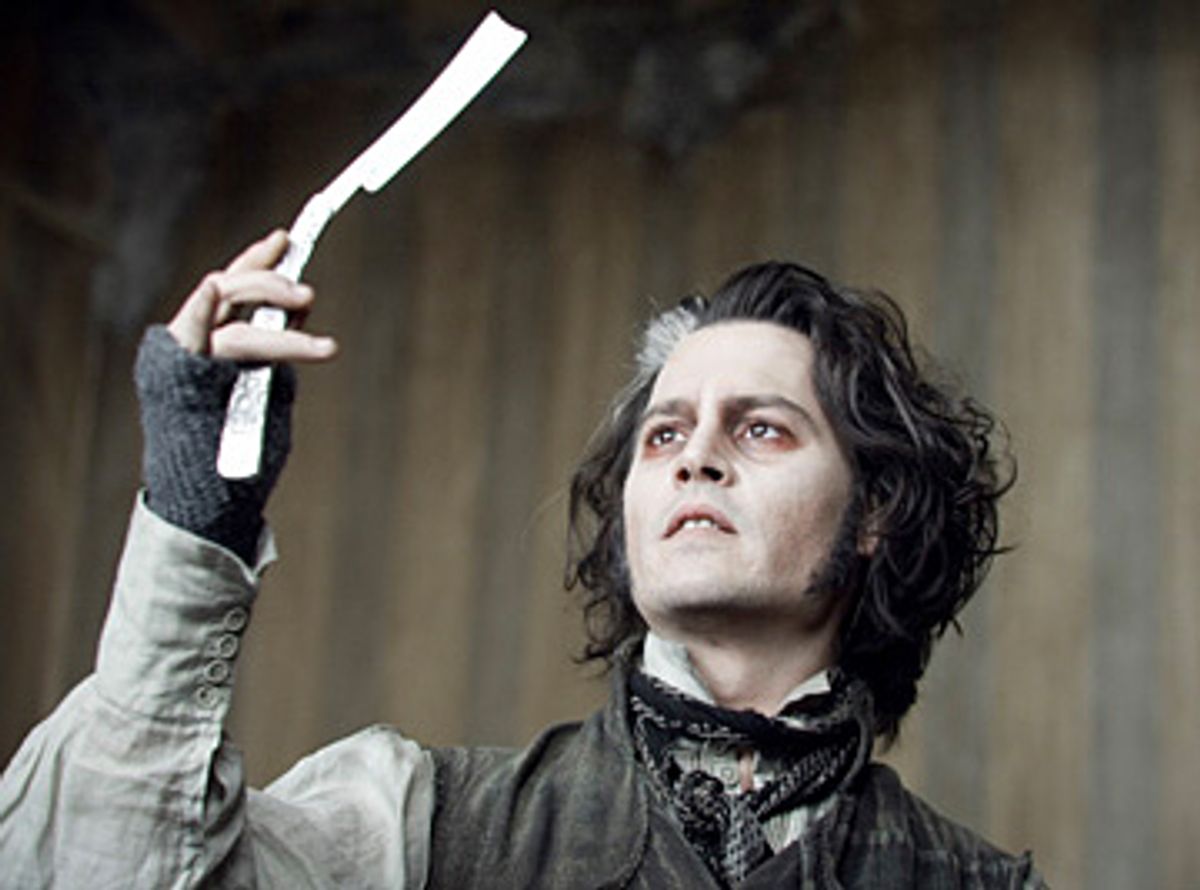 A friend of mine, a fan of Broadway musicals who hadn't yet seen Tim Burton's film version of Stephen Sondheim's "Sweeney Todd: The Demon Barber of Fleet Street," asked me if Helena Bonham Carter -- not known as a singer -- could carry the material. I have no idea what it takes to carry material like this -- to sing songs whose melodies are like meandering, worm-shaped exoskeletons, deliberately fashioned with lots of twists and turns so more words can be crammed in. I understand why they'd be difficult to sing; what's harder to fathom is why anyone would want to bother.

These are more like art songs than show tunes, attempts at Brechtian insight and scale, which I presume is Sondheim's design: Anyone looking for hummable toe-tappers of the "Chicks and geese and ducks better scurry" variety should go play elsewhere. Only a shallow person would expect an actual melody to accompany lyrics of such nihilist significance as "There's a hole in the world like a great black pit/ and it's filled with people who are filled with shit/ And the vermin of the world inhabit it." This is complex, important music, people! Not for simple, cheerful folk by any means.

I'm fully prepared to be damned to show-tune hell -- or even just baked into a meat pie -- for failing to grasp Stephen Sondheim's brilliance. Still, no matter what I think of the music in "Sweeney Todd," I'm willing to believe there have been terrific, entertaining stage productions of the show that both make the most of the story's grim wit and make you feel something for the characters.

But in this "Sweeney Todd," Burton has ground those possibilities into a grayish chalky powder. The picture throws off no feeling, not even the misanthropic kind; at best, it manages a dull, throbbing energy, as if Burton were dutifully pushing his way through the material instead of shaping it.

Johnny Depp is Benjamin Barker, an embittered soul who has spent 15 years in prison in Australia for a crime he never committed. He escapes and returns to London, where he sets out to reopen his business: In his former life, he'd been a barber, an occupation that makes him uniquely suited to avenge the man who has ruined his life, the slithery Judge Turpin (Alan Rickman): It was Turpin who sent Barker up the river, getting him out of the way so he could steal his wife and child. Barker adopts a new name, Sweeney Todd, and reclaims the space where his old tonsorial parlor used to be, above a sleepy shop run by Mrs. Nellie Lovett (Helena Bonham Carter), a chatty widow who makes a meager living selling leaden meat pies that few people can bring themselves to eat. Todd, after slitting a throat or two (though not the one he's really after), inspires Mrs. Lovett to add new, improved ingredients to her staple product, which turns her moribund enterprise into a roaring success.

The dark, glinting subtexts of this little story -- which is adapted from popular lore that came into being long before there was a Stephen Sondheim -- are many: Given half a chance, humankind will think nothing of devouring its own. Even people who do very bad things long for love and connection. And, most significantly, the lust for revenge can destroy a man's soul.

Burton seems as well suited as anyone to make something of this material: He's visually attuned to moody, velvety Victorian colors and textures, and in pictures like "Edward Scissorhands" (or, one of my personal Burton favorites, the compact and marvelous "Frankenweenie"), he has always been clued in to the way people in pain are so easily misunderstood. And even though his animated musicals have proved to be sturdier and more fun than his live-action ones (for my money, "Corpse Bride" and "The Nightmare Before Christmas" both trump the garish though sometimes enjoyably nutty "Charlie and the Chocolate Factory"), he knows how to use songs to shape a story into a meaty whole.

But this "Sweeney Todd" -- adapted by John Logan -- is all subtext and no substance. It starts off large and swaggering but doesn't know where to turn next: Burton seems fixated on serving up an event, to the extent that he neglects to dig into the story. The musical numbers feel heavy yet weirdly weightless, almost as if the performers were just hustling their way through them without trying to extract any meaning. (Fans of the stage version should also note that Burton has cut several numbers, including the title song.) Depp connects with Barker's anguished soul in only a cursory way. It's not that his singing is bad; it's just that his bitterness floats on the surface instead of running deep. Bonham Carter does manage to make her character work believably. She's not an exceptional singer, but she does have that touching quality you sometimes see in actors who've learned how to sing for a role: She summons a solid performance out of sheer determination, and there's something affecting about the world-weary youthfulness of her street urchin face -- she plays Mrs. Lovett as a scrapper who has had to learn to survive, yet she has the forlorn fragility of a wax doll that has been left forgotten in the attic.

But the picture, shot in muddy raincoat colors by Darisz Wolski, is so drab that it becomes exhausting to look at. Burton spills plenty of blood, letting it spurt and spray freely, but the display is joyless without being particularly horrifying, either -- there's something perfunctory and inconsequential about it. "Sweeney Todd" springs to life briefly when Sacha Baron Cohen, as rival barber Signor Adolfo Pirelli, sashays onto the screen: His flamboyant flouncing channels the spirit of character actor Erik Rhodes, who graced several of the Astaire-Rogers musicals with his intentionally phoney European elegance. But Cohen's role is small, and once he's gone, "Sweeney Todd" sweeps us back into its great black pit. As human beings -- the vermin of the world who inhabit it -- we're not part of the solution, we're part of the problem, and so maybe this dingy, uninteresting movie is all we deserve. Welcome to the dark side. That will be $11.50, please.