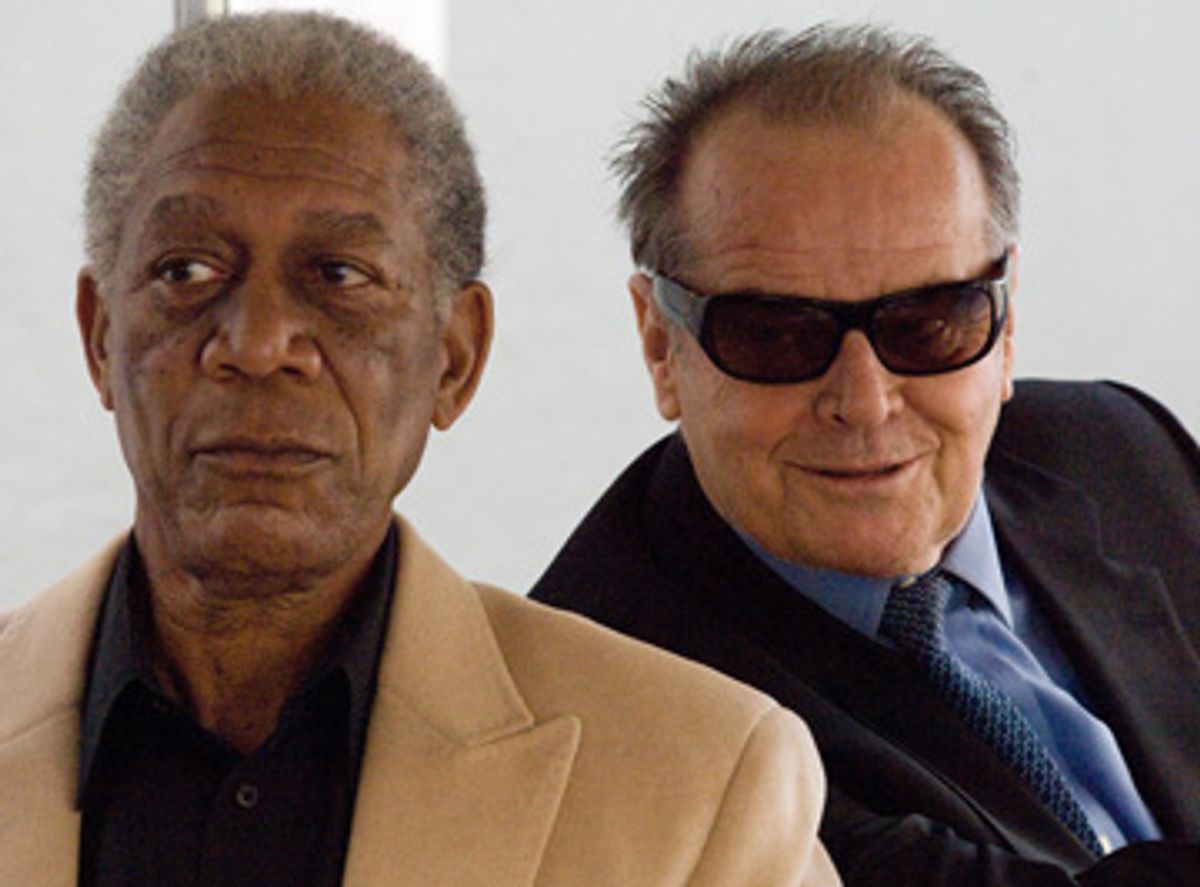 Nothing says Christmas like the Christmas cancer movie, but perhaps because sturdy American values have been in decline for a while now, several years have passed since we've had one. The wait is over: Rob Reiner's "The Bucket List," in which Jack Nicholson and Morgan Freeman play terminally ill codgers who bust out of the cancer ward with a checklist of things to do before the Grim Reaper appears and cuts their SAG cards in two, opens in selected cities on Christmas Day. And what lucky cities those are! The rest of you will just have to wait to get your dose of "Live every day as if it were your last" bromides.

Any moron can make a bad movie. But it takes a special breed of schemer to make a picture as shameless as "The Bucket List." There's no need to pick at the little stuff here, like the fact that Reiner kicks off the movie with one of Freeman's trademark "This is God speaking" wisdom-clogged voice-overs. (How I wish Groucho were alive to take a crack at the line "I believe that you measure yourself by the people who measure themselves by you.") Maybe it's even possible to live with the fact that Freeman plays the winking, twinkling teller of truths, while Nicholson gets to be the cantankerous, wrinkly crustacean, the kinds of roles in which we've seen these actors again and again.

But even if you can gloss over the things about "The Bucket List" that are merely boring, you'll still have to reckon with the things that are reprehensible -- or so absurd that they defy parody. Admittedly, the list of goals these two gents hope to achieve before kicking the proverbial bucket is quite modest, including stuff like "Witness something majestic" and "Drive a Mustang Shelby." ("Kiss the most beautiful girl in the world" is a taller order -- although sure enough, the movie finds the most sugary way of handling that one, too.)

The script is by Justin Zackham, but even if you can blame him for the movie's cruddy dialogue, Reiner ultimately has to be considered the one holding the bag: The picture is so dense with cornball staging that it's practically performance art. In one scene, Nicholson's character, Edward -- an incredibly rich SOB who has alienated almost everyone, including numerous ex-wives and his grown daughter -- weeps alone in his fancy penthouse apartment. We see him reflected in the vast expanse of his very expensive window, hot little tears trickling down his craggy cheeks, as two women who may or may not be hookers he has hired gabble in the background: "Is he crying? He's usually so much fun." And just as Carter (Freeman) is about to get some circle-of-life nookie from his wife, with whom he has been reunited after a troubling separation, he collapses on the floor of the couple's bedroom -- we see only his feet, twitching with spasms. Reiner couldn't have made the moment any cheaper if he'd tried.

When Carter and Edward climb to the top of an Egyptian landmark for a quiet, intense conversation, their noble heads bathed in golden sunlight, the movie achieves a kind of perverse nirvana: Rarely have I seen such serene poo. Yet even the movie's life-affirming pretensions have an aggressive edge. The message of "The Bucket List" is that we should stop and smell the roses, count our blessings, hug someone we love, before it's too late. That's an audacious demand, coming from a movie that squeezes the life force right out of you.