The year in celebrity scandal

From attention-seeking celebrities to roving nut jobs with automatic weapons to the self-deluded editors of mean-spirited gossip rags, this is the year that media-savvy lunatics took over the asylum. 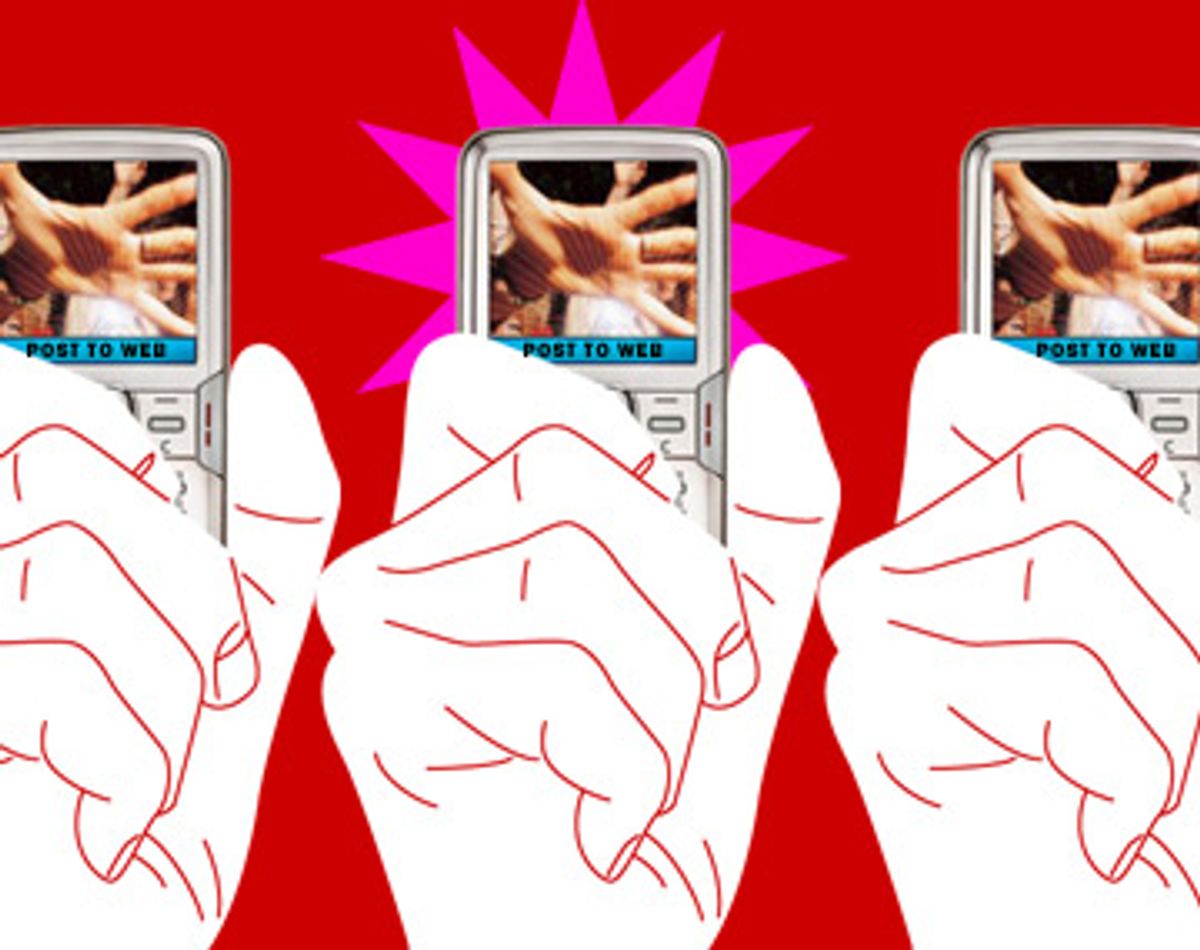 When I was in third grade in Catholic school, one of the girls in my class wrote "Fuck You" all over the stalls of the girls' bathroom in red Magic Marker. When I walked into the bathroom and saw those words, I didn't think, "Oh my God! Who would do such a thing?" I thought, "Wow, Tracy Griffin is going to be in big trouble for this one!" Among the dutiful Catholic students who suspected that God would punish them for merely talking in class, Tracy Griffin stood out like a hungry pit bull at a free-range chicken ranch.

But anonymity is never really the sociopath's goal, least of all now, when the mentally unstable have the media savvy to know how to get their message across, whether they're marching into Hillary Clinton's campaign office with fake explosives taped to their chests or mailing detailed videotaped tomes to the appropriate department at NBC News in order to clarify the nuances of their upcoming suicidal killing spree.

In 2007 more than ever before, newspapers and Web sites and innocent bystanders with camera phones were hungry for a full-blown spectacle, and sensing that the world was their stage, a gaggle of maniacs and attention-seeking outsiders delivered their best performances. The media echo chamber dutifully printed and broadcast everything straight from the mouths of high-profile violent offenders and felons alike, calling it "news" and thereby convincing other disenfranchised citizens that the best way to get your voice heard is by doing something "newsworthy" in the fine tradition of John Hinkley Jr., Ted "Unabomber" Kaczynski, Mohammed Atta and other celebrated sociopaths, terrorists and misfits.

Meanwhile, celebrities were cornered and tagged by surveillance cameras, digital cameras, cellphones, voice mails, e-mails, downloaded files and anonymous posts in comments sections. The same general-purpose hysteria and judgment that we applied to high-profile criminals seemed to float free like a radioactive cloud, ready to descend on anyone who dared to be outspoken or opinionated or inebriated or just unkempt at the wrong place and time. In an extended, slow-motion backlash against celebrity culture, we elevated ordinary citizens with nefarious intentions to superstardom, and administered relentless, brutal beatdowns to superstars, telling ourselves that they deserved to be cut down to the size of ordinary citizens.

While formerly scorned loose cannons of the celebrity magazine world like Star and InTouch -- plus newly minted rags like TMZ and Gawker -- gained massive audiences by serving up appetizing pap to feed our worst impulses, an odd group of attention-seeking celebrity sociopaths rose to the occasion with increasingly aggressive public displays of affection for themselves and no one else. These were the Tracy Griffins of the entertainment world, an unruly gaggle of whoring celebrity sea donkeys who kept the rubberneckers in their thrall by showing up half-dressed and half-conscious wherever they knew flashing cameras would be present.

But in this head-spinning year of celebrity obsession and backlash, did we gain anything by listening in on Alec Baldwin's private phone message to his daughter, or watching camera-phone footage of David Hasselhoff drunkenly scarfing down a hamburger, or reading Charlie Sheen's alleged e-mails to his ex, Denise Richards? While none of us are above snickering at a rare glimpse of a celebrity during a particularly low moment, those glimpses are so common these days that they're really not all that amusing anymore, particularly when they're followed by a slew of Op-Eds, follow-up pieces and 15 million Web posts about whether Baldwin or Hasselhoff or Richards is a good parent, talented actor, upstanding citizen, worthwhile human being, on and on and on until our minds are thoroughly scrambled. You may have clicked on Perez Hilton or Gawker out of casual curiosity, but when you woke up three hours later, your head filled with an addled jumble of unsubstantiated gossip and idle judgment plus a dizzying volume of disconcertingly passionate opinions from the unwashed masses, your worldview and your priorities were irretrievably skewed, like it or not.

What's fascinating and disturbing about this moment in our culture is this pervasive feeling of vertigo, the push and pull of new media marginalizing the more historically weighty stories while the flashiest trivia holds the camera's gaze. In the age of scrutiny, it should come as no surprise that those in the spotlight crave anonymity, while those who feel invisible seek attention. With the cacophony of millions of voices, it's not hard to wonder which voices deserve our ear, and which indiscretions deserve our forgiveness.

In 2007, the massive, multimillion-dollar celebrity gossip industry that formed from what was once the passing fancy of People magazine suddenly began firing on all pistons, demanding to be fed a steady flow of angry outbursts and meltdowns and breakups and mishaps. So the gossip-seeking soldiers were mobilized, hitting the streets in search of the slightest stumble, slurred remark or misstep.

This year, the boundaries of good taste and respect for other human beings were crossed so many times, it's taxing to even consider them. TMZ has become the bratty child king of this dubious kingdom, slinging its nastiness to a restless population of TV producers and news reporters anxious to get on top of stories that "capture the public's imagination" -- meaning, make viewers raise their eyebrows and smirk and then turn up the volume. But if TMZ is the young tyrant, Gawker is the court jester, laughing while heads roll as if it's above the entire spectacle. Gawker's editors and writers have embraced a rhetorically untouchable stance, imagining themselves as crusaders against celebrity culture, which they revolt against by ... let's see, reprinting celebrity gossip with their own nastiness scribbled in the margins. The site's "Stalker" feature in particular demonstrates how much freedom comes from fancying yourself beyond reproach. By dishing the latest up-to-the-minute celebrity sightings in New York City, Stalker effectively broadcasts each star's whereabouts to every psycho within spitting distance. "Avenue of the Americas and 50th Street, Vanessa Minnillo buying a pair of shoes at Nine West with a friend," one post read, while another contributor gushed, "Saw Ryan Gosling at 62nd and 3rd Avenue at 7:30 p.m. He looks hot in person. He's lost a lot of weight and was smoking a cigarette while crossing the street with a blonde."

When questioned about the site's Stalker feature by Jimmy Kimmel, who was sitting in for Larry King one night, Gawker editor Emily Gould demonstrated the knee-jerk immaturity of the young have-not, asserting that celebrities are "protected by piles of money." Interesting that a crusader against celebrity culture could embrace the same mixed-up, childish notion -- that fame and wealth "protect" people and make them happy -- shared by the celebrity magazines for which her publication has claimed to have such contempt.

This is an important part of the logic of the Year of the Lunatic: If the rich and famous are happy and carefree, then you, by dint of your relative insignificance and poverty, have every right to make them as unhappy as humanly possible.

Of course, Gawker's spite didn't stop with the rich and famous, as Carla Blumenkranz's excellent n + 1 profile on the evolution of Gawker points out. As Gawker matured, regular, everyday people were increasingly treated to the suspicions and scorn typically reserved for soft-pawed elites.

But "lunatic" is just another word for a little guy with a big grudge, whether he's armed with big guns, flippant blogs, fake bombs or fake boobs. What confounded our notions about the benefits of superstardom the most this year was the way that a small group of famous busybodies unraveled and acted out while the cameras rolled. An unruly herd of celebrity sea donkeys demonstrated that they felt just as disempowered as unpopular college students, mentally disturbed drunks and the self-deluded editors of gossip rags. Tough as it is to side with the attention-seekers, in a nation of finger-wagging, name-calling, letter-writing, comment-posting, mean-spirited, stalking busybodies, maybe the crotch flash is the ultimate subversive act.

If that's the case, then the downward spirals and meltdowns of 2007 must have been crafted by subversive masterminds, holding the world rapt with their collective determination to have their rum-soaked fruitcake and eat it, too. Far from acting like the happiest, luckiest people on earth, a handful of celebrities began behaving just like disenfranchised nut jobs. Even though we strained to write off Paris Hilton's incarcerated foot-stomping, Britney Spears' nonstop antics, Amy Winehouse's melodramatic missteps, and Lindsay Lohan and Nicole Richie's relentless determination to tie one on and get behind the wheel as the flailing of addicts crying out for help, addiction may be merely a side effect: If publicist-created events and loud, celebrity-pandering clubs don't drive you to drink, nothing will. For a sane, sober adult, a trip to Pure is pure torture.

So why did they keep coming back for more punishment? How could we believe that they felt hurt by our negative attention, when they couldn't seem to get enough of it? Why not move to Des Moines, Iowa, or just visit that other bar that's not flanked by hired goons with invite lists and a hundred desperate whippersnappers waiting impatiently by the velvet ropes?

They can't let go for the same reasons that we can't let go. We're engaged in a mutually destructive relationship with the world's unstable citizens. Like the nuns at my Catholic school, we welcome the colorful misfits and adorably needy outcasts, we come to rely on the sweet taste of schadenfreude they offer, and then we become incensed when we can't seem to tame them.

Appearing to grasp their insupportable mission at last, some of the Gawker editors quit the gossip site a few weeks ago in one last burst of melancholy navel-gazing, quoting Blumenkranz's observation that "the status of Gawker rose as the overall status of its subjects declined, and it was this that made Gawker appear at times a reprehensible bully."

But even as a handful of bullies grow up and move on, there will always be a new slew of reprehensible bullies to take their place. Today's media-centric maniacs don't want to be tamed, whether they're holding the camera or parading in front of it. For them and for the Tracy Griffins of the world, sharp words and trips to the principal's office and unflattering footage on TMZ and weekend stays in prison are the only real proof that they exist.

For a sociopath, anonymity is worse than death. In a land where there's no such thing as bad press, eventually we were destined to pay the price for keeping our cameras rolling.