The senator may have traveled widely, but the critically important subcommittee on Europe has languished under his leadership. 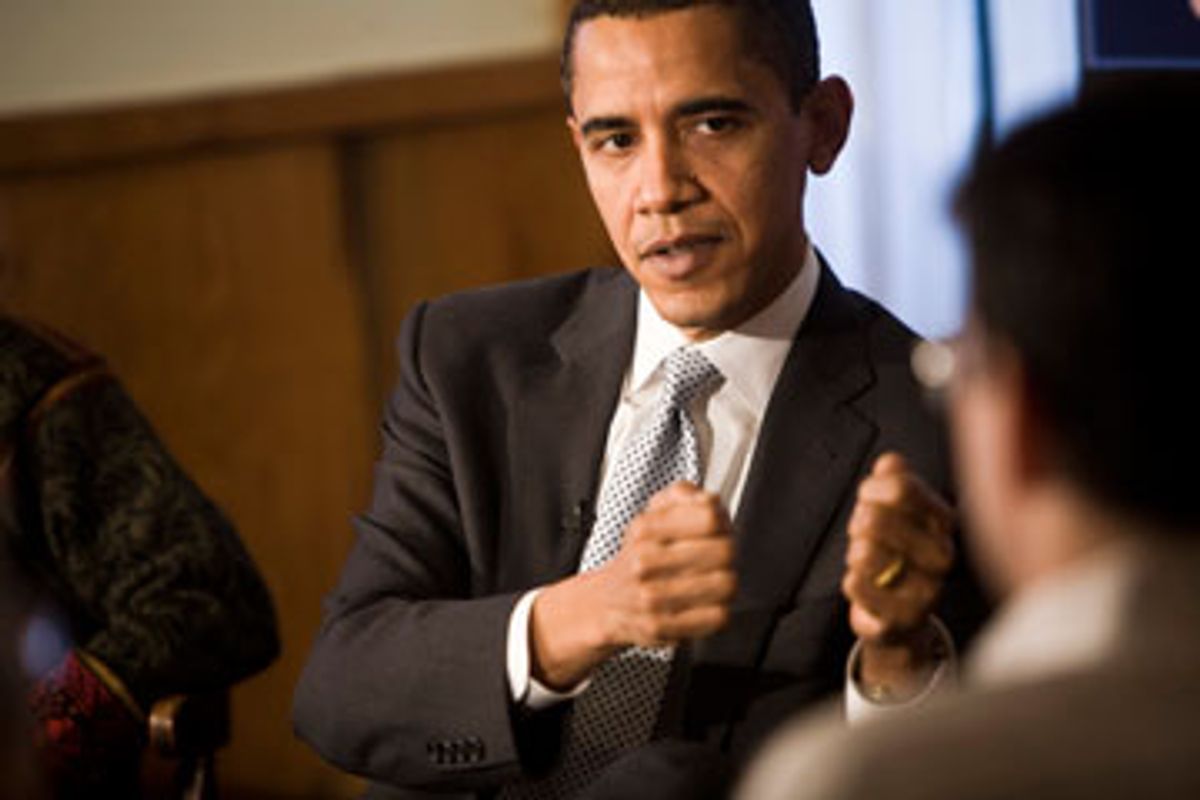 Doubts about Barack Obama's presidential credentials have crystallized during the past two weeks over his stewardship of the Senate Foreign Relations Committee's Subcommittee on European Affairs, which has convened no policy hearings since he took over as its chairman last January. That startling fact, first uncovered by Steve Clemons, who blogs on the Washington Note, prompted acid comment in Europe about the Illinois senator's failure to visit the continent since assuming the committee post, and even speculation that he had never traveled there except for a short stopover in London.

But why should those questions matter to Americans who consider Senate hearings so much useless verbiage? And why does anyone care whether and where a would-be president has traveled, on official or personal visits?

The simple answer to the first question is that Senate hearings do not merely provide occasions for grandstanding as many voters may suspect, but fulfill a critical purpose in providing information and perspective to lawmakers. In the Senate, the foreign relations subcommittees have few direct legislative responsibilities, but they have traditionally gathered substantive research for the committee itself and for the rest of the Senate.

That is why congressional hearings matter, and why a subcommittee chairmanship represents a significant responsibility. Knowledge is not just power but the fundamental requirement for either house of Congress to act as an equal of the executive branch in government.

Should Obama wonder whether he ought to have bothered with his subcommittee, he could ask his friendly rival Joe Biden, D-Del., who chaired the Europe subcommittee for many years during the Cold War. Biden effectively exploited the chairmanship to transform himself from a junior member into one of the Senate's most knowledgeable experts on arms control, nuclear weapons, European attitudes toward America and the Soviet Union, the European Union's policies, and the role of NATO, which also comes under the subcommittee's mandate. As a result, Biden starred in Senate hearings on the SALT II arms treaties and eventually established himself as a leading national voice on foreign policy.

"I wouldn't call it a neglect of duty but a missed opportunity to explore issues that will be of fundamental importance to the next administration," says ambassador John Ritch, who served for two decades as the Senate Foreign Relations Committee's senior staffer on European affairs and East-West relations, before going on to represent the Clinton administration at the United Nations organizations in Vienna.

Ritch points out that as subcommittee chair, Obama could have examined a wide variety of urgent matters, from the role of NATO in Afghanistan and Iraq to European energy policy and European responses to climate change -- and of course, the undermining of the foundations of the Atlantic alliance by the Bush administration. There is, indeed, almost no issue of current global interest that would have fallen outside the subcommittee's purview.

Certainly Obama is capable of formulating the concepts and questions that his subcommittee could have explored. In an otherwise unimportant press release hailing the visit of Poland's president to Washington last July, he took the trouble to note several important issues affecting our relations with Europe, including the renewal of transatlantic relationships, repairing our ties with what the Bush White House contemptuously called "old Europe," integrating Russia into Western institutions, consulting our allies on proposed missile defense deployments, and securing additional European troops for the Afghan security mission.

Perhaps he could not have been expected to undertake an ambitious round of hearings when he was in the midst of deciding to run for president -- but that decision may merely point up the conflict between ambition and experience that has raised questions about his candidacy.

So much for what might have been. Both Obama and his campaign spokespersons have taken pains to deny the suggestion that he has spent no time in Europe. As he said at the first Democratic debate last April, Obama regards the European Union and NATO as the most important allies of the United States, which would make ignorance of Europe a huge void for an aspiring chief executive.

"I've traveled extensively in Europe ... I love Europe," Obama told the Iowa Independent Web site a couple of days ago. But as Clemons noted on the Washington Note, the Obama campaign has not provided much detail on his European experiences and itineraries so far.

Those details are readily available, as indicated in a Chicago Tribune profile of Obama, which covered his 2005 senatorial trip to examine nuclear sites in Russia with Sen. Richard Lugar, R-Ind., then the chairman of the Senate Foreign Relations Committee. That story, whose deeper theme was Obama's tutelage in foreign affairs, mentioned that he had traded his blue tourist passport -- "which he had taken across Asia, Australia and Africa as well as most of Europe" -- for a burgundy-colored passport that identifies him as an official of the U.S. government.

If Obama wants to show where he has been, he merely has to release his passport records. Then everyone would know that his boast about traveling extensively in Europe is true -- even if this year he didn't have time to convene a hearing on the momentous issues affecting our relations with that continent and the world.