The year in the environment

One step up, one step back was the refrain in news about global warming, automobiles and biodiversity in 2007. 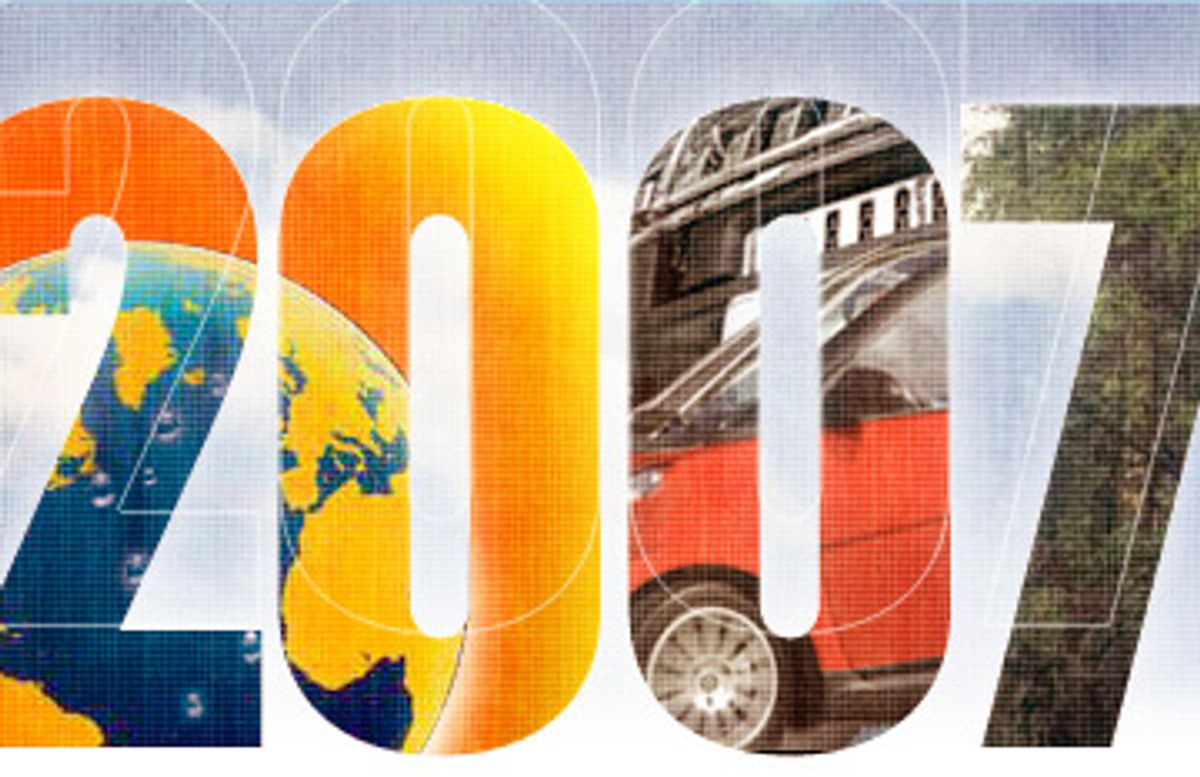 This year, Al Gore, the Man Who Was Almost President, received a stunning vindication from the Nobel Committee for his Paul Revere campaign about global warming. "The Earth has a fever, and the fever is rising," Gore said in his Nobel lecture in Oslo, Norway, in December as he accepted the Peace Prize, which he shared with the scientists of the Intergovernmental Panel on Climate Change. "The experts have told us it is not a passing affliction that will heal by itself. We asked for a second opinion -- and a third -- and a fourth -- and the consistent conclusion, restated with increasing distress, is that something basic is wrong. We are what is wrong, and we must make it right."

In 2007, even the United States stopped asking for a second opinion. The Bush administration now agrees that global warming is a threat. But all the plaudits heaped on Gore couldn't move the United States to, in Gore's words, "make it right." The United States remains the only industrialized nation not to endorse the goals of the Kyoto Protocol; Australia, the other big holdout, belatedly ratified the treaty's goals in December. Not coincidentally, Australia has recently been plagued by serious drought. But the United States, where the governor of drought-ridden Georgia held a prayer vigil in November in hopes of inspiring rain, was still not swayed. At the international climate talks in Bali, Indonesia, this December, the Bush administration refused to agree to any mandatory limits on greenhouse gas emissions, giving developing giant China cover to avoid any such restrictions itself.

Yet there are tantalizing signs that the American people are not waiting for the Bush administration to leave power to start taking steps to address the "planetary emergency" that Gore warns about. A Senate committee passed the first legislation that would impose mandatory limits on greenhouse gases. Although the bill may not make it to the president's desk, it's a sign that meaningful climate legislation is on the horizon. In the meantime, action is occurring at state and local levels. To date, some 725 U.S. mayors, representing 25 percent of the U.S. population, have signed a pledge to reduce greenhouse gases by 2012. In August, Illinois became the 26th state to require that some of the state's electricity come from renewable sources. And in October, Kansas became the first state to refuse a permit for a new coal-fired power plant because of the threat it would pose to public health and the atmosphere.

Frustration abounds in the scientific community. The IPCC's latest dire report, released in November, made bleaker projections than ever, yet climate scientists fear that the world's simply not heeding their alarm. More than 200 scientists were so fed up that in December they signed a petition calling for the world to take drastic action to reduce greenhouse gas emissions in half by 2050. In his Nobel lecture in Oslo, Rajendra Pachauri, chairman of the IPCC, warned that unchecked warming could bring massive ice melting in Greenland and disappearing rainfall in many tropical areas. Yet he reminded the world that the worst threats can still be ameliorated: "The implications of these changes, if they were to occur, would be grave and disastrous," he said. "However, it is within the reach of human society to meet these threats." It looks like the United States -- and the world -- will have to wait for the next American president to begin to meet them.

PLUG IN, DRIVE ON

With the price of oil inching near $100 a barrel, Americans searched for new ways to save gas and the atmosphere. Many drivers kicked the SUV habit and switched to smaller cars. As of September 2007, 16 percent of cars sold this year were diminutive compacts, including the likes of the Honda Fit and the Mini Cooper, up from 13.8 percent in 2002, according to the National Automobile Dealers Association.

While hybrids remain a fraction of the overall car market, this year they continued to gain popularity. Automakers reported an 82 percent increase in hybrid sales this year, compared with last. (That's not counting General Motors, which doesn't break out hybrid sales from others.) Toyota, makers of the popular Prius, saw a 109 percent increase in hybrid sales this November, compared with last. Finally, the Bush administration got in on the act, signing a new energy bill that raises the fuel-efficiency standard for car fleets from today's 25 mpg to 35 mpg by 2020.

Those who dream of driving without guilt -- or at least with less guilt -- are tricking out their hybrids to go farther with even less gas. This year, the number of so-called "plug-in hybrids" on the road, which get over 100 miles per gallon, quadrupled as corporate fleets and utilities, and even some individuals, experimented with enhancing their hybrids. Plug-ins are hybrid cars that have been converted, at a cost of some $10,000, to plug into a conventional electric socket and gather juice from the grid.

"The plug-in car is the only car that gets cleaner as it gets older, because the grid is getting cleaner," says Felix Kramer, founder of CalCars.org, a nonprofit that promotes the vehicles. Advocates believe that Toyota could sell a plug-in version of the Toyota Prius for just $3,000 extra, although the leading hybrid automaker currently has no plans to do so. General Motors plans to release a plug-in hybrid Saturn Vue in 2009 and the plug-in hybrid Chevy Volt in 2010.

The race is on to build cars that sip even less fuel. A group of engineering students at the Massachusetts Institute of Technology have launched a competition with hundreds of other engineering students at colleges around the globe, including India and China, to produce the first plug-in electric hybrid that gets 200 miles per gallon within three years. And Silicon Valley upstart Tesla Motors has plans to start selling its fully electric, $95,000 roadster early next year. Actors George Clooney and Matt Damon have each already reserved one.

But what of those who foresee no future in driving at any miles per gallon? These are the stalwart bike activists who pedal to work or the store or school, and this August, the Bush administration gave them a swift quick in the spokes. The secretary of transportation declared that bike paths and trails are not legitimate forms of transportation, as she attempted to blame the tragic Minneapolis bridge collapse, which killed 13 people and injured 100 more, on money being diverted from shoring up the nation's bridges to building paths and trails. That's right. According to Mary Peters, bike paths kill.

This year, the drumbeat of extinction grew louder, as traditional threats like habitat loss and poaching met the newfangled menace of global warming, putting stress on many critters already under pressure. "We previously assumed that if the land is protected, then the plants and animals living there will persist," said Sandy Andelman, an ecologist with Conservation International. "That may be wishful thinking."

No nature preserve, however well protected, can reliably shelter its resident plants, insects, birds and primates from the vagaries of changes to the Earth's atmosphere. More than half of the world's protected areas, such as national parks and forest reserves, are likely to be negatively impacted by global warming, even in a best-case scenario, according to a new study from scientists with Conservation International, the University of Maryland and the University of Wisconsin.

Already, almost a third of bird species in the U.S. need help to avoid going the way of the dodo, according to a new report from the Audubon Society and the American Bird Conservancy released in November. That followed the news that 16,306 species are now on the brink of extinction around the globe, according to the latest IUCN Red List. And a third of primate species, humans' closest living relatives, are also staring down extinction, with the 25 most endangered species barely able to fill a ballpark. "If you took all of the remaining individuals of those 25 species that are on the list, and you gave each one a seat in a football stadium, you probably couldn't fill the stadium," says Russell Mittermeier, president of Conservation International, who is chairman of the IUCN's Species Survival Commission's Primate Specialist Group.

Yet, efforts to curb global warming could save tropical rain forest habitat, home to many of the world's threatened flora and fauna. Forests are like giant carbon sinks, as the leaves of trees and plants suck up carbon dioxide in the atmosphere through photosynthesis, converting it into wood and other biomass. When a forest is cleared or burned for agriculture or ranching, much of that carbon dioxide is released back into the atmosphere. That's why deforestation accounts for some 20 percent of human-induced greenhouse gas emissions.

"We'll never solve the climate challenge unless we address the loss of tropical forests, which puts out as much carbon dioxide as all the planes, trains and cars worldwide," said Stephanie Meeks, acting CEO and president of the Nature Conservancy, at a news conference at the Bali climate talks.

The Nature Conservancy is helping the World Bank create incentives to preserve rain forests. An effort called Cool Earth, which has won the support of former British prime minister Tony Blair, among others, is also raising money to preserve forests in the name of climate protection. At the Bali conference, saving rain forests in developing countries became a priority for the next international climate treaty. It's a good start to 2008.