Who would Antonin Scalia torture?

Next week, when the Supreme Court hears a case challenging the use of lethal injections, we may learn more about the legal limits to state-sanctioned pain. 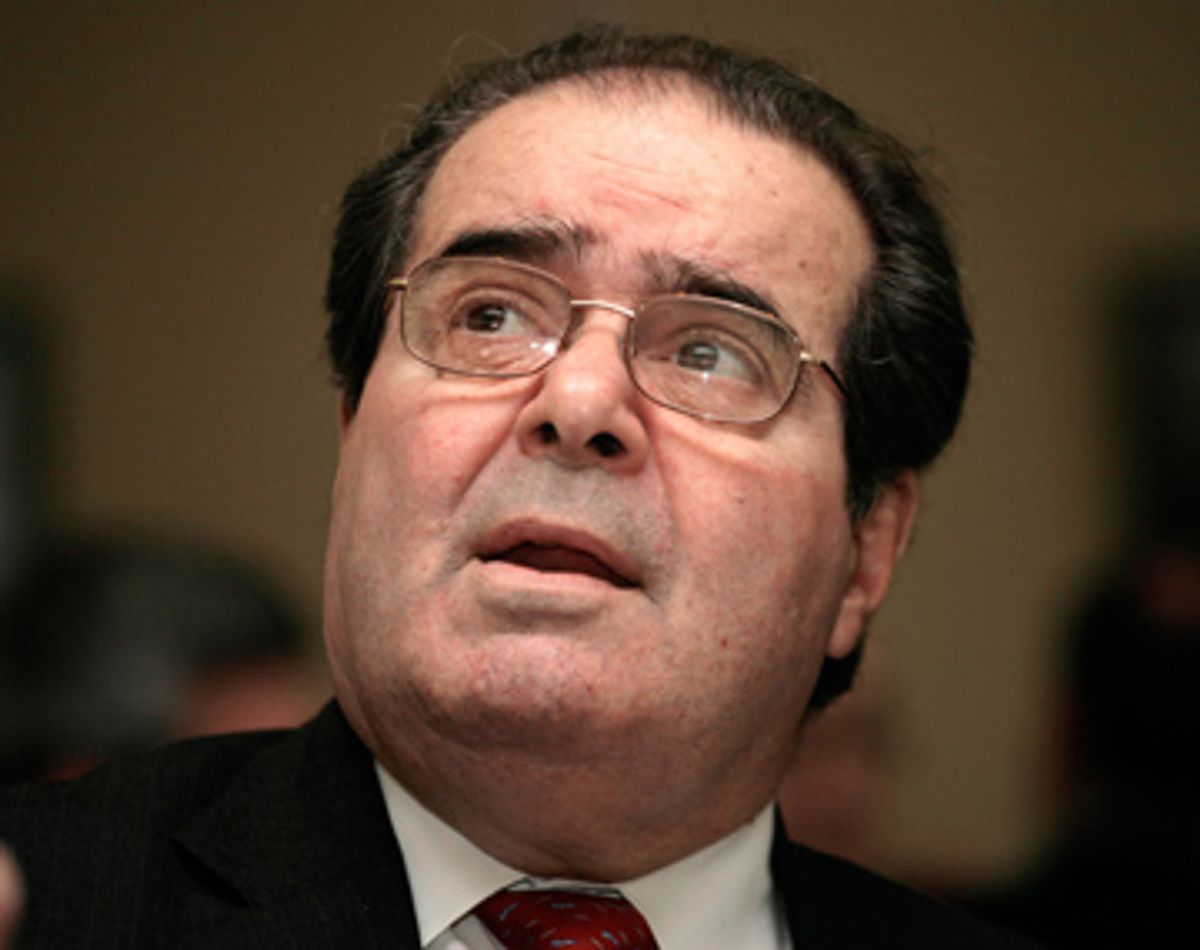 Last June during a panel discussion in Ottawa about terrorism and the use of torture, Supreme Court Justice Antonin Scalia stood up for the TV torturer extraordinaire and hero of Fox Broadcasting's "24." Scalia insisted that the fictional spy had "saved hundreds of thousands of lives" using tough interrogation tactics to stop a terrorist from nuking Los Angeles.

The clear implication was that Justice Scalia does not believe in an absolute ban on torture -- at least when it comes to suspected terrorists. That's a popular view these days, particularly among members of the Bush administration, although the hard questions of whether there are any limits on the use of torture have yet to be fully tested in the courts. We may get a somewhat better idea of just how far Scalia and his colleagues would go in tolerating abusive treatment of prisoners -- or what some would call torture -- next week when the Supreme Court considers a case challenging the use of lethal injections in execution.

The case, Baze v. Rees, is the first since 1878 in which the Court has agreed to examine the constitutionality of a specific method of execution. A de facto moratorium on execution by lethal injection has been in place nationwide pending the outcome of this case. Although the Court will not rule on the constitutionality of the death penalty itself, the federal government and states that employ lethal injection fear an adverse ruling could make it much more difficult, if not impossible, to carry out executions.

But what does lethal injection have to do with torture? Lethal injection was, after all, designed as a humane, indeed painless, alternative to electrocution and has been used by 36 states and the federal government to conduct some 929 executions since 1976. Witnesses to many of these executions have reported seeing nothing more dramatic than the condemned "going to sleep."

Attorneys for the plaintiffs in Baze -- one the murderer of two Kentucky deputy sheriffs, the other the murderer of a man and his wife -- have pulled together a sizable body of evidence suggesting not only that killing someone painlessly with the three-drug "cocktail" employed by today's executioners may be a lot harder than was previously thought, but that witnesses to executions may not realize they are watching someone being tortured to death.

Scientists agree that the three-drug concoction can kill a person painlessly if everything goes right. But the court will hear arguments that so many things can and do go wrong in the administration of these chemicals that there is an "unnecessary risk" that an execution may, in effect, involve the torture of the condemned. Plaintiffs have filed evidence from a handful of botched executions, including one in which witnesses heard the inmate moaning for 50 minutes before he expired.

Why things go wrong has to do both with the chemicals used and the personnel who administer them. Lethal injections typically employ sodium thiopental, a fast-acting barbiturate, to ensure that the condemned is fully unconscious before the second drug, pancuronium bromide, is administered. If the individual is not fully anesthetized, pancuronium bromide -- which paralyzes the muscles, including the diaphragm -- will make him feel as if he is suffocating to death, a feeling not unlike that of having a severe heart attack. In a case challenging Tennessee's use of lethal injections, state medical examiner Bruce Levy testified that "suffocating to death would be a most violent form of death." It is precisely this sensation of suffocation that has made the CIA's use of waterboarding, or mock drowning, so controversial. Prior to the Bush administration the U.S. government had condemned the use of waterboarding as torture.

Because pancuronium bromide is used principally to immobilize the condemned -- so observers don't have to watch him gasping, choking or thrashing about in his death throes -- the plaintiffs contend it is unnecessary for accomplishing the purpose of execution. They also argue that because the chemical paralyzes the voluntary muscles, an individual who feels as if he is suffocating to death would be unable to speak and witnesses would have no idea that he was suffering. This problem would continue as the condemned is hit with the third chemical, potassium chloride, which is designed to stop the heart but which also irritates the lining of the veins, creating a sensation that the person is on fire.

Dr. Dennis Geiser, a professor of veterinary medicine at the University of Tennessee, told me that the use of potassium chloride and pancuronium bromide without proper anesthesia would result in an "agonal type of death." "It would be like tying you up to a wall and torturing you. You're wide awake but you can't respond." Geiser, a death penalty supporter, and three other veterinarians have filed a friend-of-the-court brief in the Baze case in which they note that the pain caused by potassium chloride is so severe that its use on conscious animals has been condemned by the American Veterinary Medical Association.

Veterinarians normally euthanize animals using an overdose of a single barbiturate, pentobarbitol, and critics of the three-drug formulation argue that this might provide a simple alternative to the current formulation, providing the condemned a death at least as dignified as that provided the average household dog or cat.

If Justice Scalia and his colleagues have any doubt that inmates may remain conscious during execution, they can also examine a brief from the Anesthesia Awareness Campaign that presents painful-to-read testimony of patients who have undergone surgery in which neuromuscular blocking agents were administered without sufficient anesthesia. Kathleen LaBrie described waking up to "grinding and pushing in my nose" during sinus surgery. "I really thought I was slowly dying and not one person in that room cared. If anyone wants to know what HELL is like this is it." Kelly Haapala, who was conscious during surgery for a hip-socket joint replacement, said, "I felt like they were killing me and I needed to do anything I could to move and let them know I was awake! I still have nightmares that this has happened to me." Diana Todd, who was conscious during a hysterectomy, described it as "the most traumatizing experience of my life. It takes away your basic humanity. That kind of terror is cruel beyond description."

The Anesthesia Awareness Campaign cites a 2007 study suggesting that there are 26,000 cases a year of conscious paralysis or intraoperative awareness during surgery. That's about one in every 1,000 surgical procedures. Although the group does not take a position for or against lethal injection, opponents of the current protocols argue that if error rates are that high among trained anesthesiologists and medical professionals whose job is to alleviate suffering, then it's extremely unlikely that the hodgepodge of doctors, nurses, paramedics and technicians -- some with little or no training -- employed to kill people will be getting it right often enough to ensure that an execution is not a form of "cruel and unusual" punishment.

The Bush Justice Department and 21 death penalty states contend that they not only can but do perform painless executions. They've filed briefs arguing that no method of execution is pain-free, and that the risks of pain from lethal injection are not "substantial" but are purely hypothetical. They contend that the risks are certainly no greater than they are from either electrocution, firing squad or hanging, none of which has been found unconstitutional. Furthermore, they say a method is not "cruel and unusual" under the Eighth Amendment unless it is administered with "deliberate indifference" to the pain and suffering of the condemned. In short, if the inmate suffers, it's not because the authorities in charge of executing him meant to have him suffer.

Elisabeth Semel, director of the Death Penalty Clinic at the University of California at Berkeley, says the Supreme Court "will have to articulate a standard [for a method of execution] for the first time," and that the "unnecessary risk" standard proposed by plaintiffs could force death penalty states to consider not only the severity of the potential pain and the likelihood of that pain occurring, but also procedures that would result in less pain and suffering.

Although the court has not previously mandated such a standard for executions, it has found punishments that involve "torture or lingering death" to be unconstitutional. In 1878 it provided a short list of "atrocities" it counted as torture, among them beheading, drawing and quartering, burning at the stake, live disembowelment, and public dissection. More recently the court concluded that exactly what constitutes "cruel and unusual punishment" relies on "the evolving standards of decency that mark the progress of a maturing society."

At a time when waterboarding, which this country once prosecuted as a war crime, is not only condoned but enshrined as a national security imperative by the president and presidential wannabes Rudy Giuliani and Mitt Romney, some may wonder whether our standards are instead devolving. Last month nearly every Republican in the House (189 of 194 who voted) -- along with 10 Democrats -- opposed legislation that would have prohibited the CIA from using waterboarding, mock executions and attack dogs during interrogation, while requiring CIA adherence to the Geneva Conventions on the treatment of prisoners of war.

It is difficult to predict what level of torture, or pain short of torture, the Supreme Court may be willing to stomach. In 1992, Justice Scalia and Clarence Thomas were the only two justices who disagreed with the George H. W. Bush administration in a case argued by then Deputy Solicitor General (now Chief Justice) John G. Roberts, Jr. that prison officials violated a shackled prisoner's Eighth Amendment protections against "cruel and unusual punishment" when they "maliciously and sadistically" beat him up. In his dissent in Hudson v. McMillian, Scalia argued that there was no Constitutional violation in beating a shackled prisoner unless there was "significant injury." It's useful to recall that it was precisely this view that was revived in an extreme form by the current Bush administration, ten years after Scalia's dissent, in the infamous 2002 "torture memo" of Assistant Attorney General Jay S. Bybee, who argued that torture applied only to physical pain "equivalent in intensity to the pain accompanying serious physical injury, such as organ failure, impairment of body function or even death." Of course the Bush administration insists that it does not and has not engaged in torture. Likewise Scalia, in his McMillian dissent, stated that "torturous punishments" would be prohibited under the Eighth Amendment.

Scalia's originalism may allow him to denounce medieval tortures condemned by the founders, such as drawing and quartering, while tolerating more modern innovations lacking a legislative proscription. But Scalia has also acknowledged that there are limits on what authorities may do to a prisoner. Last year, during oral arguments in a Florida death penalty matter where the condemned inmate claimed that a lethal injection could cause him "gratuitous and unnecessary pain," Scalia suggested that he might have a problem with the procedure were it to cause "excruciating pain."

So, there you have it. Every man has his breaking point. For Scalia it would seem to be "excruciating pain." Now, if only there were a way to force him to tell us what level of pain short of torture violates the Eighth Amendment. Perhaps Baze will get him to talk.