Will first-timers caucus tonight? Will independents support Obama? We'll find out in a few hours. 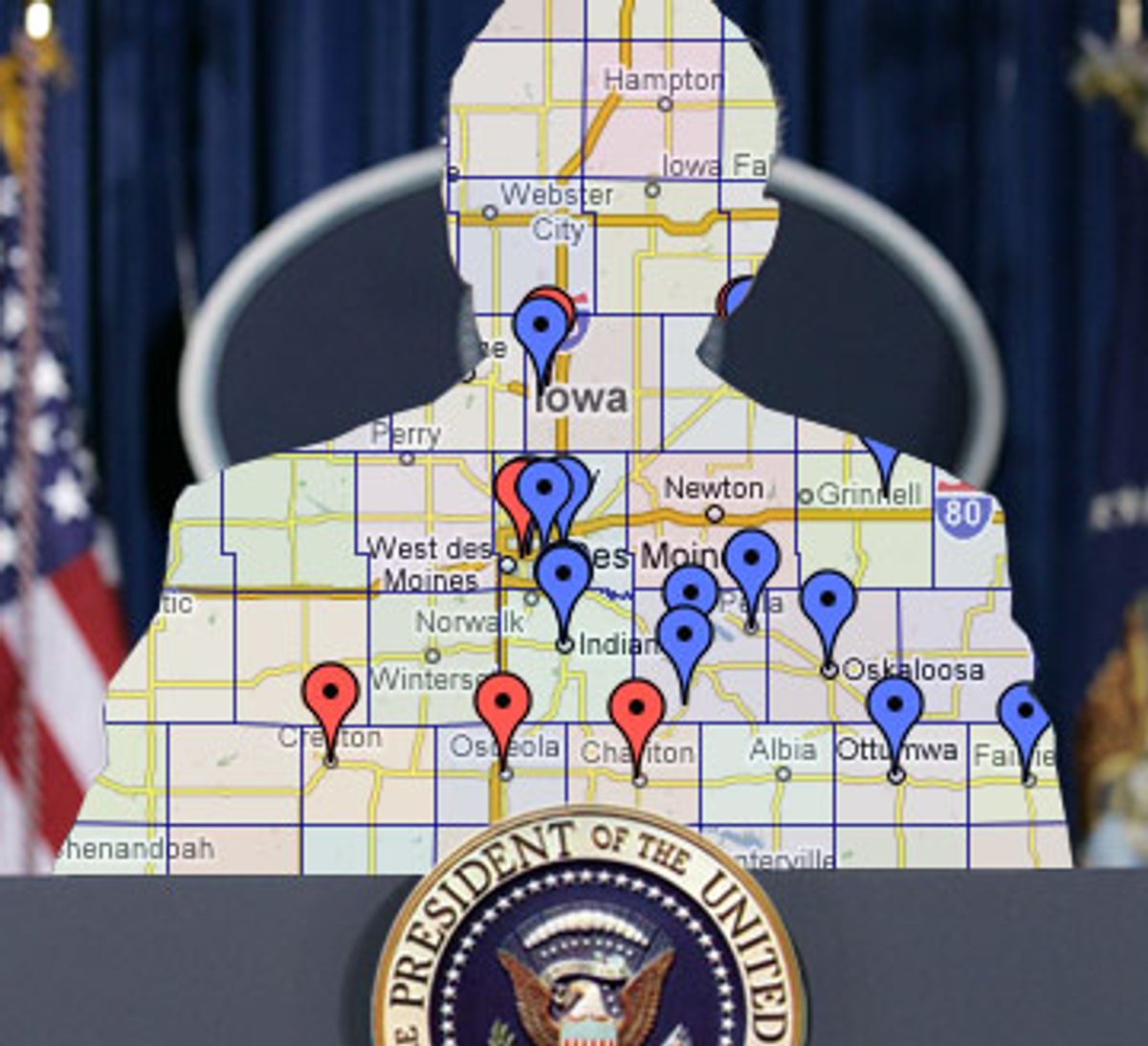 I'm an Iowa caucus newbie and it shows; I haven't mastered the logistics yet, and it's almost already over. I arrived late at the Barack Obama event Wednesday night because a nice young volunteer offered to take us there, with our car trailing -- and we all got lost. (But a lot of reporters -- won't mention names -- came in later than we did; I think we're all used to events starting late and lasting forever, but Obama was right on time.) Caught the last couple of minutes of his standard speech -- he was hoarse and very tired but the crowd was on fire -- and the contrast with the Clinton group Wednesday morning couldn't have been more enormous; the average age seemed to be about 22. (I should note that it was held at a high school.) We stood behind actor Bobby Cannavale, who was kvelling over Obama pretty much unrecognized by the crowd and the media. Back at our hotel we ran smack into a very tired Bill Clinton, whose staff was trying to hustle him up to bed. He was very friendly, but the nation's smartest Democrat said essentially nothing we don't know: Tonight's results will depend on who turns out, and where. He smiled and then just shrugged.

Indeed. In downtown Des Moines it's strangely quiet. I showed up a little late to a Mitt Romney event and it was ending, a half-hour early, and the biggest group in the crowd seemed to be reporters. Make of that what you will. I saw the big, empty Mitt Mobile, in which his sons apparently traveled to every Iowa county. The most visible constituency is "Firefighters for Dodd" in their bright yellow sweatshirts, belying low expectations for the Connecticut senator tonight. After lunch we ran into a crowd of Ron Paul supporters out-shouting a lone, young Obama supporter at the corner of Seventh and Market in a cold wind. "I'm about to take off," he told us, exasperated. "They just won't leave me alone." He left to find some nearby Obama friends and told us he'd look for us at the victory party.

The Clinton "victory" party happens to be in our hotel, so I'll bring you the latest, much later. It's still sunny, which many people say favors Clinton, given her reliance on older voters. But there's a cold, piercing wind, and with this weather anything could happen. The former president is right; it all depends on who shows up tonight, and although that's all anybody has been talking about all day long, nobody really knows what to expect. No one trusts the latest American Research Group poll showing Clinton back on top, but one thing is interesting: The huge gulf between the percentage of registered Democrats ARG expects to turn out for the caucuses (83 percent) and the Des Moines Register projection (closer to 50 percent, with the rest being independents crossing over, and presumably for Obama) helps explain the uncertainty. If the independent surge materializes and produces a big Obama win, expect to spend the next few days debating whether that means the Illinois senator is a Reagan-esque gift to his party, expanding it beyond 1990s Clintonian polarization, or the Republican Party's last laugh. (I'm hearing both here in Des Moines.) More later. I'm going to get an early start finding my caucus; I don't want to be late tonight.