Most Dems no better than Bush on Pakistan

The Bush administration's bungling in Pakistan and Afghanistan has led to a resurgent Taliban and al-Qaida and loss of U.S. influence in the region. But Democrats did little to stop it. 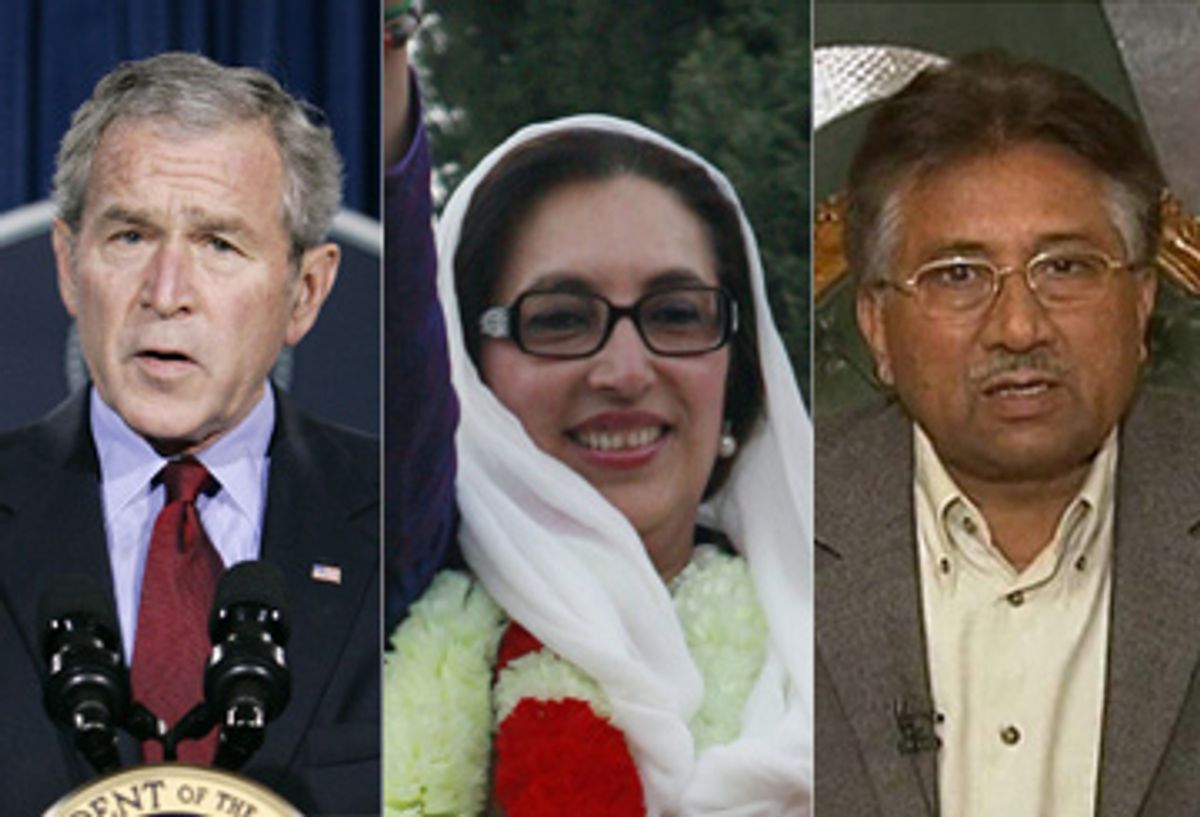 Last week, the assassination of Benazir Bhutto marked the failure of an ill-conceived U.S. attempt to orchestrate the return of a deeply divisive political exile, discredited by allegations of corruption and incompetence, to take power in Pakistan. The Bush administration's aim was to install a leader who would simultaneously "democratize" and secularize her country, fight terrorist groups, and make peace with Israel. Instead, the sad event of Bhutto's murder has exposed the strategic bankruptcy of the administration's Pakistan policy. But Democrats should not feel vindicated by this failure, for they have endorsed virtually all of the Bush team's mistaken views about Pakistan policy.

One of President Bush's more appalling flights of fancy in the foreign policy arena is his belief that democratically elected governments will somehow be more inclined than incumbent authoritarians to support U.S. policy objectives that are wildly unpopular with their own electorates. The logical absurdity of this proposition should be readily apparent, but, nevertheless, the Bush administration has proceeded blithely to test it in the real world: In January 2006, the White House and Secretary of State Condoleezza Rice insisted, over the objections of Palestinian and Israeli leaders, on holding elections in occupied Palestinian territories -- purportedly to elect a Palestinian government that would have the legitimacy to crack down on ongoing anti-Israeli violence. The result of this experiment, of course, was the victory of Hamas, long designated by the United States as a terrorist organization.

Unfortunately, the Bush administration did not draw the appropriate lessons from this episode and decided to extend its second-term push for "democratization" from the Middle East to embrace Pakistan as well. But on-the-ground conditions in Pakistan make any push for "free and fair" elections there a foolhardy course for U.S. policy. Polls indicate that the majority of Pakistan's population today is overwhelmingly opposed to many U.S. policy goals, including killing or capturing al-Qaida and Taliban affiliates and their Pakistani allies. In such an environment, any government produced by genuinely open elections will not be willing or able to support U.S. objectives in the war on terror. Nevertheless, the goal of democratizing Pakistan through presumptively "open" elections has been supported not only by the administration and other Republicans, but by the Democratic "opposition" as well (more on this below).

In 2002, President Pervez Musharraf allowed carefully controlled elections to be held in Pakistan. Those elections produced a relatively competent technocratic administration, including Shaukat Aziz, who was selected "finance minister of the year" by Euromoney and the Banker magazines. In 2004, Aziz became prime minister as well as finance minister; during his three years as Pakistan's head of government, he presided over the most sustained period of economic reform and modernization in the country's history. But Washington, in its bipartisan wisdom, said that this was not good enough.

The Bush administration coupled its support for Pakistan's democratization with an effort to handpick Benazir Bhutto as her country's democratic "savior." But we have also seen this (very bad) movie before in the administration's abortive effort to promote Ahmad Chalabi as the key to "democratizing" and stabilizing post-Saddam Iraq. Once again, the Bush administration turned to a Western-educated political exile, the head of a family kleptocracy who had twice shown herself to be an ineffective head of government, to shore up its tattered strategic partnership with Islamabad. Like Chalabi, Bhutto played to all of Washington's preferences, saying that she would lead a renewed fight against the Taliban and al-Qaida in northwestern Pakistan (notwithstanding the fact that, as prime minister in 1993-95, she authorized extensive Pakistani support for the emerging Taliban movement) and sending messages to Israeli leaders that she would recognize Israel.

In the aftermath of Bhutto's death, a conventional wisdom is already taking shape about America's Pakistan policy: that the Bush administration supported Musharraf for too long and too uncritically. Certainly, most Democratic presidential candidates and political leaders are making this charge. But the sad reality is that after Musharraf helped the United States in its post-9/11 campaign to unseat the Taliban in Afghanistan, the Bush administration effectively walked away from both Afghanistan and Pakistan, just as its predecessors did in the 1990s after a decade of extensive U.S.-Pakistani cooperation to support Afghan mujahedin resisting the Soviet occupation of their country.

Clearly, the Bush administration failed to finish the job against either the Taliban or al-Qaida in Afghanistan when it had the chance. Indeed, in early 2002, the administration withdrew the critical special forces and paramilitary cadres that were spearheading the campaign to round up Taliban and al-Qaida elements in Afghanistan so that those forces could regroup, redeploy and begin "preparing the battlefield" for America's upcoming invasion of Iraq. Moreover, the administration failed to stabilize Afghanistan in the aftermath of the Taliban's overthrow and vetoed efforts by the international community to do so by blocking the expansion of the international Security Assistance Force outside Kabul until the security situation in the country had deteriorated to a dangerous point.

All this meant that post-Taliban Afghanistan became a much bigger security problem for Musharraf than would have been the case if the Bush administration's strategic decision making had not been so incompetent. This problem was exacerbated when Osama bin Laden and several senior associates took refuge in northwestern Pakistan in 2002 -- beyond the logistical and political capabilities of the Pakistani army to reach. That same year, the White House refused to fund serious counter-narcotics initiatives in Afghanistan to spray poppy fields or bomb processing facilities, thereby assuring that Musharraf's Taliban adversaries would have an independent and substantial source of funding.

Furthermore, while Washington worked with Afghanistan's neighbors to establish the Karzai government in December 2001, the Bush administration did not sustain the robust regional diplomatic effort that was needed to support Afghanistan's post-Taliban political reconstitution. Rather than build on the regional diplomacy that had launched the Karzai government and establish a regional framework for post-conflict stabilization in Afghanistan, the White House opted to pursue purely bilateral security arrangements with former Soviet states in Central Asia and with India. For Pakistan, this meant that support for the war on terror was no longer a broadly legitimated regional imperative, but a coercively imposed U.S. diktat.

And, while Washington demanded, with increasing stridency, that Islamabad move against Taliban and al-Qaida elements on Pakistani territory, the Bush administration and Congress could not get their act together to provide Musharraf with significant financial support until 2005. In this regard, statements that the United States has provided Musharraf with $10 billion in assistance since Sept. 11, 2001 are misleading. In fact, more than half of that amount is not true "assistance," but rather reimbursements for costs accrued by the Pakistani military supporting U.S. counterterrorism operations. With regard to the most significant channels of U.S. economic and security assistance to Pakistan, the Bush administration did not put together a meaningful aid package for Musharraf until 2003, and this package was not enacted into law until December 2004 -- more than three years after 9/11 and well after the United States had blown any real chance to destroy al-Qaida. (The same pattern applies to U.S. efforts to stem the narcotics trade in Afghanistan; the Bush administration did not begin to develop even a superficially coherent counter-narcotics strategy for Afghanistan until 2005 -- too late to break the critical financial link between the opium trade and the resurgent Taliban.)

In the wake of Bhutto's death, it is clear that the Bush administration has no Plan B for Pakistan. But Democrats -- with the singular exception of presidential hopeful Sen. Chris Dodd -- want to "double down" on the administration's failed approach, effectively pursuing Bush's "Bhutto strategy" without Bhutto. Thus, New Mexico Gov. Bill Richardson talks obtusely about organizing all of Pakistan's "democratic" parties into a coalition government, even though, if Pakistani politicians were capable of such a step, it would not need to be suggested by an American politician. Richardson also advocates withholding all military assistance to Pakistan until Musharraf steps down; similarly, Sen. Hillary Clinton talks vacuously about the lack of sufficient conditionality on U.S. assistance to Pakistan. Sen. Joseph Biden, for his part, talks about the need to proceed expeditiously to parliamentary elections. Biden anticipates, with seeming sincerity, that Bhutto's party, the PPP -- now headed by her 19-year-old son, who will not be able to lead the party in the next round of elections, as this would interfere with his academic schedule as an Oxford undergraduate -- would win the right to form the next government.

Sound policy toward Pakistan must start with a sober understanding of reality. That reality was described with admirable succinctness in 2004 by the 9/11 Commission, writing in its final report: "Musharraf's government represents the best hope for stability in Pakistan and Afghanistan." But insisting that Musharraf -- or any potential successor from the senior ranks of the Pakistani army -- break ranks with his military power base and the only institution that can limit the spread of militant violence in Pakistan and Afghanistan is only going to undermine the prospects for such stability.

Getting Pakistan "right" will require that we, first of all, get Afghanistan"right," and that we embed both of these troubled states in a broader regional strategy that includes the development of regional security institutions. Russia and China are already moving in this direction with their cultivation of the Shanghai Cooperation Organization, encompassing the former Soviet states of Central Asia -- which have largely abandoned their post-9/11 security ties to the United States -- and including Pakistan, India and Iran as observers. If the United States wants to preserve a serious leadership role in the region, or simply protect its critical security interests where Central and South Asia come together, it will need to abandon comforting illusions about "democratization" and begin working seriously to persuade Pakistan and other regional states that they can serve their interests best by working with us.

Flynt Leverett, former senior director for Middle East affairs at the National Security Council, is a senior fellow at the New America Foundation.

Hillary Mann Leverett, who served as director for Iran and Persian Gulf affairs at the National Security Council, is chairman of STRATEGA, a political risk consultancy.