The politics of not nice 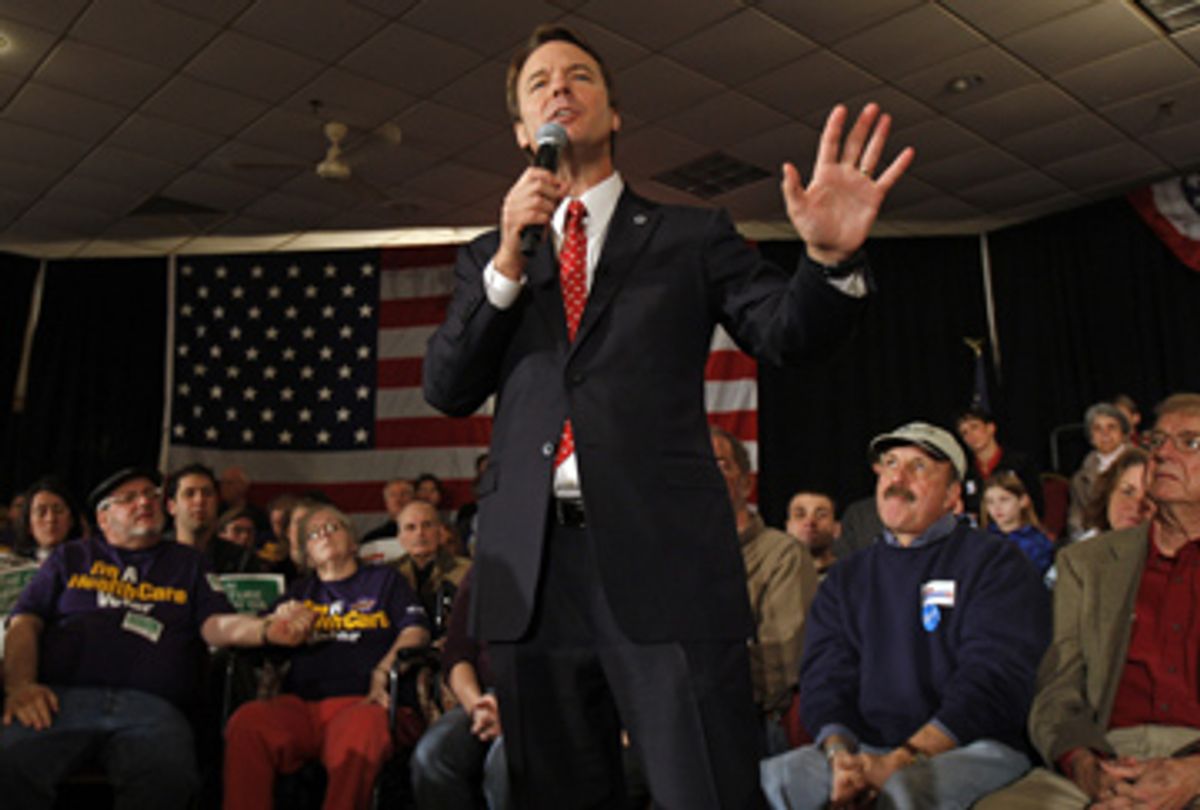 CONCORD, N.H./ John Edwards is ferociously on message today. At the Shriners Hall here Saturday morning, the second-place winner in Iowa depicted himself as an underdog fighting not only big-money interests but two big-money rivals, Barack Obama and Hillary Clinton. Lacking cash, Edwards at least has discipline. "You can't nice [corporate interests] to death," he said at least three times. "They will drive through you like a freight train," he said twice. And trading "corporate Republicans for corporate Democrats" won't bring real change, he said repeatedly.

At a brief press availability after his talk, reporters tried to stir up an Edwards-Obama fight. Was Edwards trying to say Obama is too "nice?" (Nobody on the press bus thinks Hillary is too nice). Is Obama a "corporate Democrat?" (Edwards has essentially already called Clinton that.) Smiling, restrained, the former vice presidential nominee stayed on message and refused to take the bait. For now his immediate target seems to be the weakened post-Iowa Hillary Clinton (he seemed to say her campaign was over in a CNN interview Friday), and some supporters are optimistic that he can nudge her aside again and take second place here too.

"We're going to see the same thing here as happened in Iowa, where the status quo was rejected," Edwards told 400 avid supporters. "As much as the media said there were only two people running, [Iowa voters] said no, there are three people running, and they showed up to vote for me."

Obama is drawing much bigger crowds (an estimated 4000 in Nashua this morning), but this was a large event, spilling over into a second room, made colorful with people wearing SEIU-purple "I'm a health care voter" t-shirts, women wearing pink breast cancer garb, and a Steelworkers for Edwards contingent in dark blue shirts (the Steelworkers endorsed Edwards though Obama worked for the union during his organizing days.) Crowd-favorite Elizabeth Edwards warmed up the standing, cheering supporters by saying Edwards is the only candidate who opposes nuclear power and would structure trade agreements that "fight for workers." And when other candidates "ran to the microphones" after the assassination of Benazir Bhutto, Edwards was the only one who "went to the telephone," calling Pervez Musharraf and urging him to move Pakistan to democracy.

Like her husband, Elizabeth Edwards mostly avoided mentioning rivals by name, but she noted that "one candidate is using the word 'universal' health care," though his plan doesn't really provide it (that would be Obama) while the other "pushed a health care plan, but then used political capital to pass NAFTA" (that would be Clinton, but to be fair, it was her husband whose administration passed NAFTA, which she also supported but has since criticized.)

Edwards himself gave a particularly charged version of his usually passionate stump speech, spending a lot of time on health care and other domestic concerns and taking about a half dozen questions from the audience. In response to a foreign policy query he blasted the Bush administration's sabre-rattling against Iran. "We can't sustain this ad hoc effort to control nuclear technology; it's too easy to transfer," he added, and he promised to lead "a long-term international effort to rid the world of nuclear weapons."

But time and again he came back to the theme of standing up to corporate power and the "entrenched interests stealing your democracy." They won't "voluntarily give their power away," he warned. "I don't think you can negotiate with entrenched moneyed interests." This has been a staple of Edwards' appeal from the beginning, at first in an effort to differentiate himself from the moneyed frontrunner Clinton. But lately he's refined his rhetoric a little to heighten his differences with the more conciliatory Obama. (Despite what he told reporters, the oft-repeated "you can't nice special interests to death" line seems designed to flash a photo of a smiling Obama in the listener's mind.)

Still, while I like Edwards' fighting-populist appeal, I found myself wondering, as I have before, exactly how he would make change without "negotiating with entrenched interests." It always feels a little demagogic to me, and the first promise that, should he win, he'll have to break; doesn't a president have to negotiate with everybody (with a populist Democrat presumably taking a harder line)? And I don't say that to be demagogic in my own way; I really want to understand his theory of how a president makes change in a way I don't entirely.

So when he repeated that line in the press availability, I started to ask him "to take us to the next step" and explain what a President Edwards would do instead of negotiating, but he smiled and ended the press conference in the middle of my question. To be fair, he'd warned it would be a short session, and I can't say he was ducking my question, since I hadn't finished it. But I'll try to ask it again.

Strategist Joe Trippi stood watching on the sidelines. He shrugged when I asked what would happen Tuesday, saying it's too early to tell how much of a post-Iowa bounce Obama would get (a Rasmussen poll today has him up 10 points over Clinton, with Clinton down four points and Edwards up a point since last week; the cash-poor Edwards campaign doesn't have money to do its own poll.) But Trippi was looking forward to the ABC/Facebook/WMUR showdown Saturday night as a potentially game-changing event, depending partly on how hard Clinton was now willing to hit Obama. "I don't know how panicked they will be, that will be interesting," he said. Where Clinton and Obama closed up shop relatively early on Saturday to do debate prep, the Edwards campaign scheduled several events after the two-hour Concord rally. "We don't have to do debate prep, we know what we're saying," Trippi quipped, as he hopped on the campaign bus to Lebanon.

Standing nearby, Edwards supporter Matt Cairns agreed that Edwards knows what he's saying this time around. Cairns supported Edwards in 2004 as well. "This year his message is much stronger and more focused," said Cairns, who works as an attorney "but on the other side" from Edwards, focused on corporate defense. He likes the fighting trial lawyer anyway, and he brought along his daughter Madison, 13, who managed to snag Edwards for one last photo before he got on the bus. What will happen Tuesday? Cairns doesn't know, but says the overall Edwards campaign looks "stronger" than in 2004.

Stronger may not be enough to beat Obama, but several Edwards supporters I talked to believe he has a shot at another silver medal, knocking off Clinton again to come in second. But is another second-place result any real kind of win? Theoretically, enough second-place finishes could set up a two-way race with Obama, which Edwards backers say they welcome. Clearly Edwards is sharpening his appeal as the populist street-fighter against the surging Illinois senator, the former community organizer with progressive credentials who is now finding success preaching the politics of "unity" and reaching out to independents and Republicans, while he waits to see what Clinton does next. Tonight's debate should be fascinating.