But where can the big cats go? The deadly mauling in San Francisco underscores the paradox of zoos today. 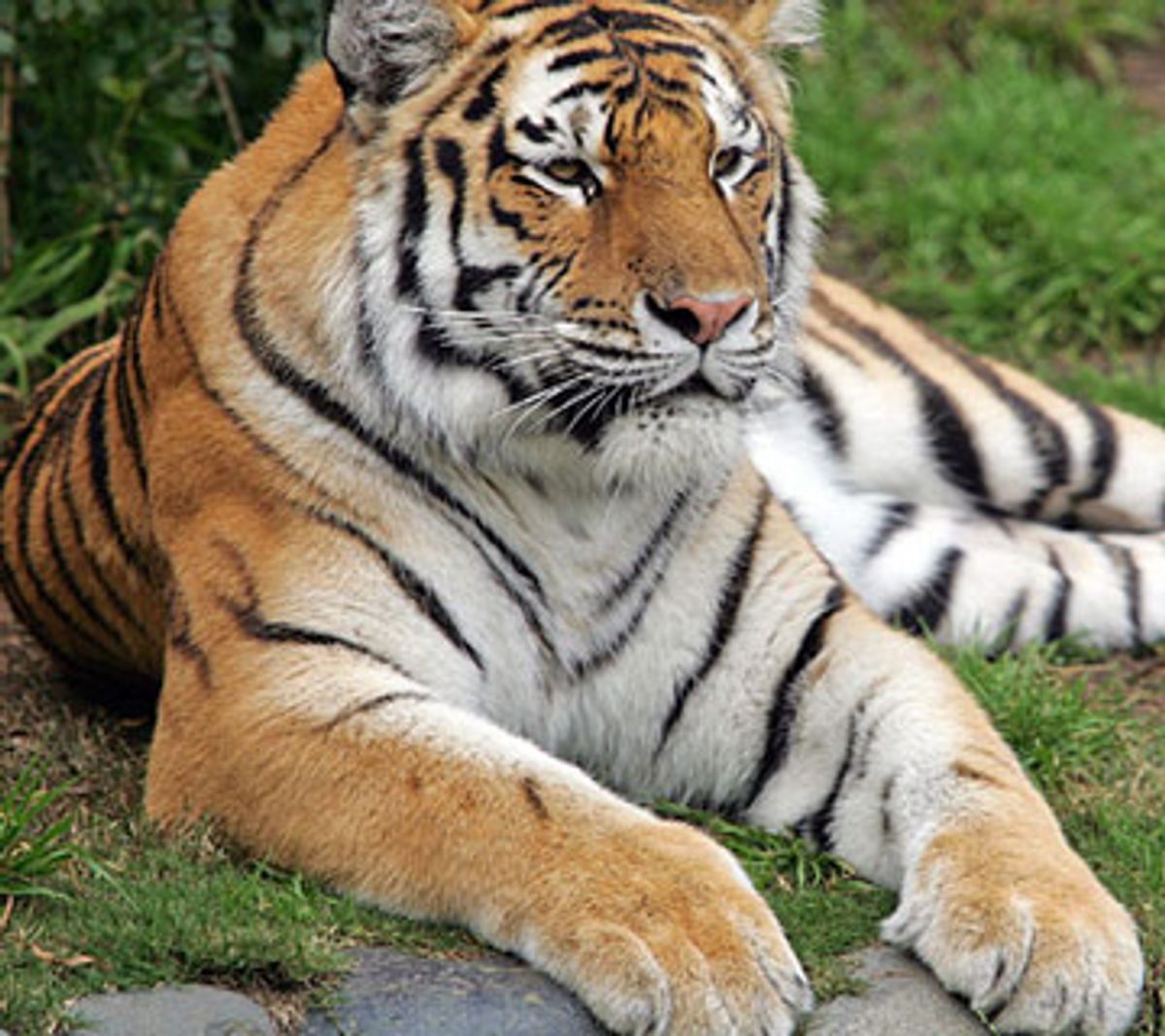 It doesn't matter whether Tatiana, the tiger who attacked three people and killed one at the San Francisco Zoo on Christmas Day, was being teased or taunted. It doesn't matter because zoo animals shouldn't be able to escape from their enclosures no matter how rude people are to them. It also doesn't matter because even if the young men were doing nothing, or were making gestures of homage and respect, Tatiana had years of reasons to be in a bad mood.

Tigers are among zoo visitors' favorite animals. They're also one reason many people hate zoos. Saddened by the picture of misery presented by the tiger who repetitively paces back and forth, back and forth, some people never go back.

Life in a zoo isn't necessarily oppressive for all animals. Most animals didn't evolve to explore as much space as tigers. But tigers in most zoos are like people spending their lives locked in an empty living room. They are confined to tiny spaces, with nothing to do. Life is intensely boring, year after year. Some animal observers say zoo life may also be stressful. Tigers, who like to lurk, skulk and hide, are on display, with groups of strangers staring at them. Freedom is absent, and so are choice and control.

The San Francisco Zoo is among the many older U.S. zoos saddled with the physical legacy of tiny, inhumane cells. Instead of replacing them all, zoos build a gorilla habitat here, a giraffe palace there, while other animals languish in the old cages. In the past decade, San Francisco Zoo has sought to shed its infamy. In 2002, it unveiled the Lemur Forest, a delight to behold, with five species of lemurs trooping over a large island and clambering through tall trees and climbing structures. In 2004, it opened the expansive African Savanna, where visitors walk along an pathway, observing giraffes, zebras and oryx rambling through open grounds. And it used the rescue of two young grizzly bears from Montana to help raise funds for a new bear exhibit bigger than all its previous bear grottoes combined.

Yet the grotto in which Tatiana and the zoo's three other Siberian tigers lived was barely upgraded from 1940, when the zoo's grottoes were built as part of the Works Project Administration. It was small, dull and, as we now know, not completely tiger-proof. In December 2006, Tatiana mauled and nearly tore off the arm of keeper Lori Komejan inside the feeding cages. As the San Francisco Chronicle reported, the state's workplace safety agency, Cal/OSHA, blamed the zoo, citing defects that the zoo knew about but hadn't fixed, and imposed an $18,000 penalty.

Whatever problems one zoo may have, conservationists argue that keeping tigers in zoos is a means to preserve a species in terrible danger. After all, wild tigers are losing ground fast. Assaulted by poaching and loss of habitat, populations are sinking. A hundred years ago there were probably 100,000 tigers. Now there are about 3,000.

Today, zoos are active in breeding programs to preserve tigers. Under the Species Survival Plan, only about 20 tiger breedings a year take place, planned to maximize genetic diversity. "The whole philosophy that I have lived by is that tigers in zoos are a genetic insurance policy," says Ron Tilson, the director of conservation at the Minnesota Zoo and a respected tiger expert who directs the Species Survival Plan at accredited U.S. zoos. "There are the same number of Amur [Siberian] tigers in captivity as in the wild, and there's greater genetic diversity in captive tigers." If a virus like distemper or feline leukemia devastated the wild population, he adds, it could be rebuilt from the genes of captive tigers.

Even Peter Knights, executive director of the conservation organization WildAid, which strives to preserve threatened animals, including tigers, worldwide, acknowledges that zoos are valuable. "Zoos play a positive role in sensitizing people to conservation," he says. "Tigers are in an ambassadorial role. The actual experience of seeing a physical animal is nothing like seeing it on a TV screen."

Knights, however, is skeptical about ever reintroducing tigers, even if it could be done in a large protected area. Predation isn't an easy trade to pick up, and wild cubs stay with their mothers for two years learning how it's done, being supported while they learn. "We haven't worked out how to reintroduce tigers into the wild yet," he says. At the same time, various projects with other big cats suggest that while the first generation will starve if they're not provisioned by humans, the second generation does fine. But it's true: tigers can't be reintroduced now. It's not safe for them out there.

Roberts of Born Free USA has no patience with the defense of zoos, either for their genetic storage programs or their ambassador roles. "The tiger is a perfect example of the way that zoos are missing the point about conservation," he says. Money spent on zoo tigers should be spent on protecting habitat for wild tigers. "There's an expenditure of millions if not tens of millions of dollars on captive tigers. If we really want tigers and not just a shell of the beast we call the tiger, the real emphasis needs to be first and foremost in the field."

Currently, despite the best efforts of groups like Born Free USA and WildAid, the outlook for tigers in the wild remains dim. The only place where wild tigers are doing well is eastern Siberia, which is also the only tiger habitat sparsely inhabited by people. "Everywhere else, everything is failing," says Tilson. "It doesn't matter how much money there is. It doesn't matter how good the recovery team is. It comes down to: Is there a will from the government to put resources into it, to create laws, and to enforce those laws? For a real failure, go look at India." There, prosecutions for poaching don't stick; the Sariska Tiger Preserve has had every single tiger killed; and the Tribal Rights Bill now in Parliament would allow hundreds of thousands of people and their cattle to live in national parks.

The ideal situation for tigers would be the protection their wild habitat. Until that comes to pass, zoos will continue to serve a purpose for helping to preserve the species. But the new safety barriers the San Francisco Zoo has installed on its tiger enclosures shouldn't be where we stop. We should also look seriously at how to make tigers happy. So why don't we do some happiness research?

Setting aside the solipsistic notion that we can never know what's in the heart of another, there are in fact multiple ways of getting at what tigers like. We could put on white coats and measure corticosteroids, stress hormones. We could find out if it's true that active tigers live longer. We could then design zoo habitats better. After all, we should treat our captives well and intelligently. If they must be in prison, why can't it be one of those country club prisons we keep hearing about?

There are encouraging signs in that direction. In recent years, zoos have constructed new tiger exhibits with big enclosures and greenery. There's usually a pond, maybe even a waterfall. Zoos have also signed on to the concept of "enrichment." They're giving animals things to play with, things to destroy, things to take apart in search of snacks.

In the Bronx Zoo, keepers spray odd scents like cinnamon or musk around the enclosure to make things more interesting for the cats. At the Minnesota Zoo, tigers get a fake carcass. It's a fake moose stuffed with meat, and the tigers have to wrestle with a long strip of rawhide to get to the meat. "The tigers really love this," says Tilson.

In fact, Tilson assures me that zoo tigers are content. Of visitors saddened by the sight of zoo tigers, he says, "It may be a look of boredom they're picking up on, but [the tigers] are not unhappy." They live longer than wild tigers. They're well-fed and safe from enemies. Tilson thinks all zoo tigers should have enrichment programs. He speaks well of the tigers-and-water shows at a few facilities, including an aquarium in Denver and an unaccredited wildlife theme park in Arizona. "As long as it's done safely, it's good for the animals," he says.

Zookeepers also tell us that tigers are cats, happy just to eat and sleep. But zookeepers so badly want their tigers to be happy that they may not be the best judges.

Elizabeth Marshall Thomas, author of "The Tribe of Tiger," argues that circus tigers are happier than zoo tigers because their lives are active and interesting. She cites an observation of Tilson's from when the Minnesota Zoo was doing endocrine studies on tigers. The tigers were in small cages in a laboratory, and had blood samples taken several times a week -- and they looked great. They were relaxed and bright-eyed, and their corticosteroid levels were far below those of the tigers on display. Apparently they liked being able to observe the activity in the lab, and they liked the regular, friendly interaction with the researchers.

If the horrible incident at the San Francisco Zoo makes people pay attention to conditions for tigers in zoos, maybe some good will come from it. It's the least we can do for the tigers while our species continues to eat up their native homes.