He's trying to reassure partisan Democrats he's the only one who can build a working majority to govern -- in a quiet voice that won't scare Republicans. 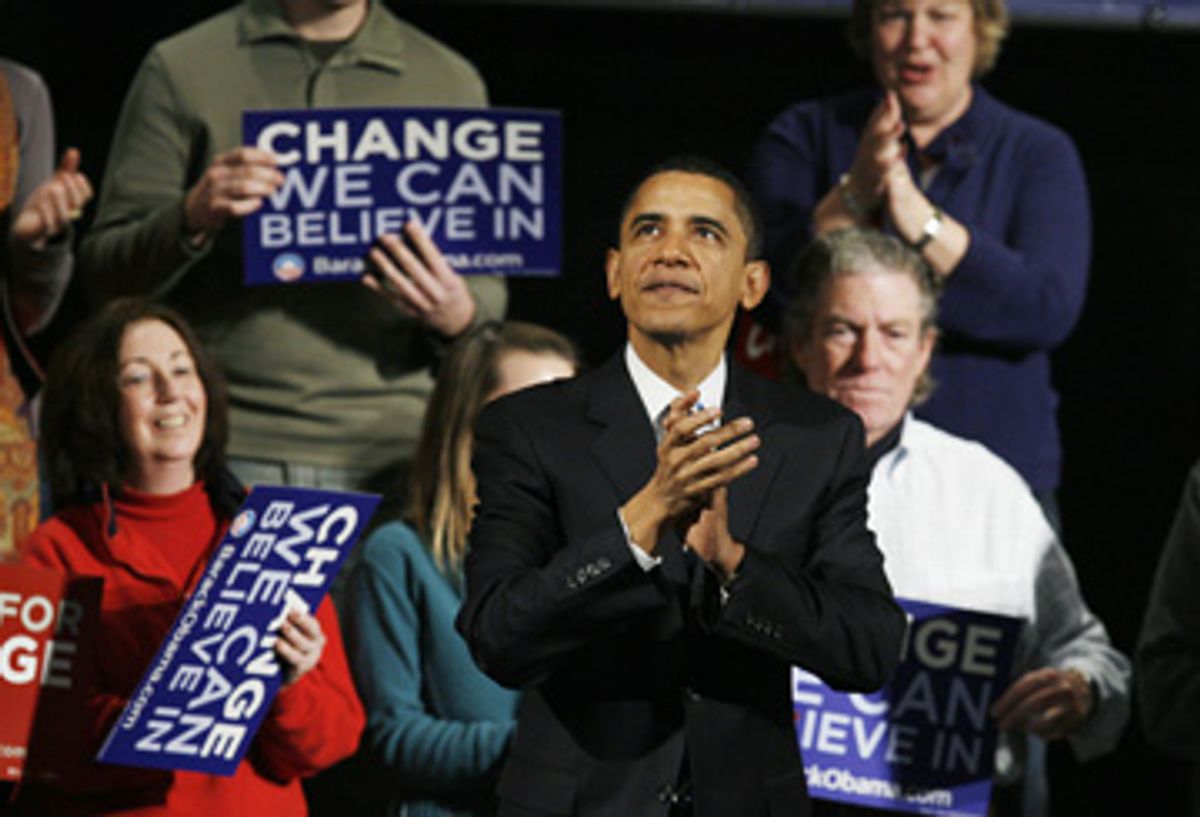 MANCHESTER, N.H./ Having confessed to not fully getting the Barack Obama phenomenon upon leaving Iowa, I've worked harder to see it in New Hampshire. Here's what I get, three days in:

Obama's up-close-and-personal political charm, even in a huge crowd. When the campaign began, I was pleasantly surprised by how much better at it Hillary Clinton was than I expected. But Obama makes warmth in a big audience look effortless. At today's Palace Theatre rally, before an audience of 900 people, he did something he often does but that I've never seen before: he summoned a young campaign supporter and brought him up on stage to thank him. This time it was Jack Shapiro, his New Hampshire field coordinator, who shambled up the steps, embarrassed but presumably thrilled. "Jack dreams of all of you going to the primary. He dreams of getting all of you to vote for me. My job is to help Jack do his job. So I am going to try to be so persuasive a light will shine on your head: 'I have to vote for Obama!'" Then he thanked his young field coordinator and told the audience "Give Jack a big round of applause." The crowd, packed with volunteers, loved it: They are Jack, and he is them. It struck me that even at the all-volunteer event last night, Hillary Clinton, while gracious, didn't single out anyone by name.

Related but different: He's very funny, with a laid back stand-up shtick. He riffed on learning the "bad news" that he and Dick Cheney are related. "That was really embarrassing. You know when they do these genealogical surveys you're hoping you're related to somebody cool, like Abraham Lincoln. Or Willie Mays. Or Tom Brady." (Some might say that's pandering to these New England voters by this Chicago Bears fan, but the Bears have no Tom Brady.) He told a protracted story of his back and forth with an Iowa Republican who quietly confided his support, all in a loud stage whisper, culminating in his asking the man, "Why are we whispering?" with Borscht Belt timing. It's a small thing, but you relax in your chair a little more, trusting a guy with the confidence to draw out a silly joke like that.

He's got something for everyone. Really. His passion is impressive, but if you listen closely to his standard stump speech, he mostly supports consensus-backed reforms ("fixing health care" and "affordable college education") and attacks easy villains ("excessive CEO pay" and "deceptive practices in the mortgage industry.") On the Iraq war, he promised to bring the troops home but also said he'll finish the job of defeating "al Qaida in Iraq," which seems designed to please war opponents and surge supporters alike (it's worth noting that war opponents tend to consider "al Qaida in Iraq" a Bush talking point.) He offered something for almost every candidate's supporters, even Republicans: "politics focused...on straight talk" (John McCain), "art and music in the classroom" (oh, that Mike Huckabee). Toward the end there was a bit more for angry partisan Democrats, some of whom don't trust his politics of unity. "You have good reason to be angry after what's happened the last seven years," promising that when he's elected, "the days of Scooter Libby justice, Brownie incompetence and Karl Rove politics will finally be over."

He persuasively defends his post-partisan politics of hope and unity. As he said Sunday: "Change will not just come from anger and turning up the heat on Republicans." Here he answered John Edwards' "You can't nice special interests to death" dig. "Some people think that's just being nice," he said, with a nice smile. Acknowledging that "Republican operatives" will work to defeat his plans, he explained "I'm more interested in Republicans and independents outside of Washington. We can reach out and create a working majority," and he added: "I'm in this race to win an election, but also to govern."

The speech, and the inspiring crowd, helped me understand the Obama movement better. I said yesterday that I don't fully understand John Edwards' "theory of change," given his pretty much unkeepable promise that he won't "negotiate" with special interests; how then will he break their hold on the country? Obama's is now clearer to me: "Creating a new majority will let us govern," he said Sunday. It's an implicit slap at Clinton, of course, but it's a rebuke to all Democratic partisans -- and yet, he may be right. It's possible that Democrats who've endured impeachment and the 2000 election and an administration that lied its way into war will continue to be uneasy with Obama's attempt at a post-partisan politics of inclusion, but I understand it a little better now. He's trying to reassure progressive Democrats he's the only one who can build a majority behind their agenda -- but he's doing it in a stage whisper, like that Iowa Republican who supported him.

Questions, questions, I still have questions. I watched the speech from the press gallery and I heard all the oohs and ahs, the whispered praise for all the good lines. (Those who compare the media's savaging of Clinton to what they did to Al Gore will probably not be mollified by the news that former Sen. Bill Bradley, the media darling who fizzled against Gore in 2000, will endorse Obama.) There were jokes about how the fact that the normally prompt Obama started almost 45 minutes late could be the beginning of the end of Obama's media honeymoon -- how dare he keep the media waiting! -- but they were only jokes, for now. The reality is, Obama's media honeymoon won't end today, but it will end. We'll learn if the "working majority" he's trying to create will be strong enough to sustain him when that happens.

I'll bring you more on Obama, Edwards and Clinton before Tuesday.