No makeover for Hillary -- yet

Even most supporters think she's going to lose on Tuesday in New Hampshire, but Hillary Clinton sticks to the script that doesn't seem to be working. 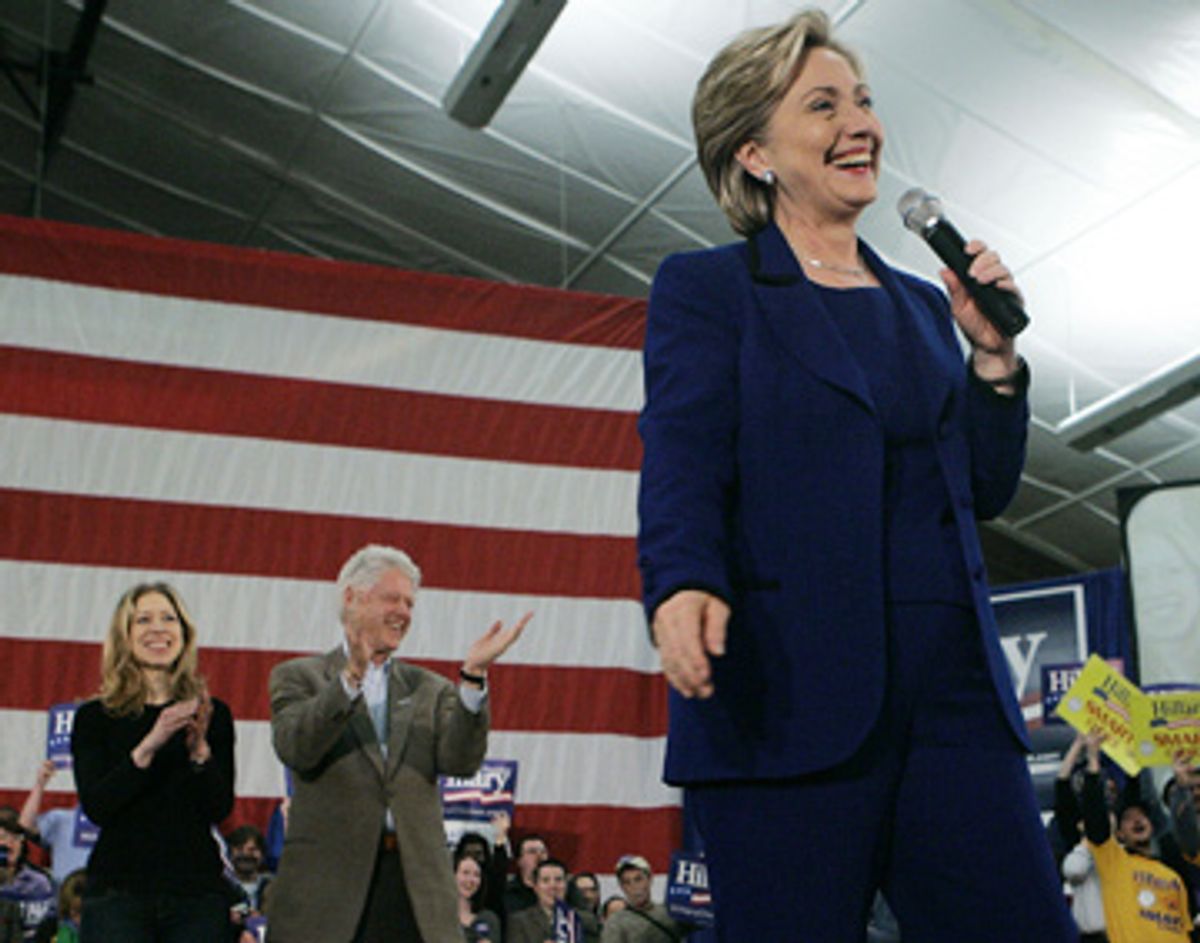 Anyone who came to Hillary Clinton's election-eve rally hoping to see a changed candidate, reckoning with the likelihood of another loss here Tuesday, working on a new message, showing any of the vulnerability evident in her big-headline teary moment Monday morning at a Portsmouth coffee shop, probably went away disappointed. In front of her biggest crowd this week, many of whom waited up to an hour in traffic, Clinton simply gave a higher-octane version of her standard stump speech. If she's going to transform her campaign to save her candidacy, it apparently will be after the New Hampshire primary is over.

Most candidates repeat their stump speeches. I've seen Barack Obama three times in person this week and another dozen speeches on TV; there's a ton of overlap. But it was surprising, after this last week of reversals for the former front-runner, to hear almost the exact same speech I heard in Indianola, Iowa, last Wednesday. Then, Clinton's steadfastness in the face of bad poll results seemed admirable. Tonight it seemed, well, steadfast.

Clinton added some personal touches Monday night that I hadn't seen. She asked if anyone in the audience was working two jobs, or without health insurance, although not many in the crowd of professionals mixed with union members cheered in affirmation, and she talked about a mother she met on the campaign trail who credited her infant's survival to Clinton's work helping establish the S-CHIP program. (But we didn't see the mother onstage -- she just waved from the crowd.) Again, the New York senator got her biggest hand when her potential to be the first woman president came up. Comparing herself to her challengers, without mentioning their names, she said, "I know what it takes" to make change, and a supporter shouted: "A woman!" That got a huge cheer plus a genuine laugh from Clinton, who quoted the old saying: "If you want something done, ask a busy woman."

She had a few other funny lines: She said she wasn't running "because I need more attention from the press." (I had already noticed MSNBC's Chris Matthews, one of her sharpest critics, spending much of her speech with his back to Clinton checking his e-mail.) "Or because I wanted to live in the White House again. I care passionately about this country." She framed some of her speech differently, setting it up with "Here's why I want to be your president," but most of what followed was boilerplate: building a strong middle class, reforming healthcare, addressing climate change.

I was struck by one major difference in the evolution of her speech-making compared to Obama's: He's gotten softer (some of that is hoarseness, but she's hoarse too), while she gets louder.

Clearly Clinton knows she has to retool her sinking campaign. But no one is jumping forward with a convincing Extreme Makeover. The biggest problem with her teary moment this morning wasn't that it dominated television coverage and the blogosphere. The problem was that it ignited debates over whether her tears were real. (I won't link to Rush Limbaugh and Michelle Malkin's bitchy reactions.) There might be no single better symbol of Clinton's troubles fighting Obama. Still, that breach in her armor of invulnerability and indomitable competence at least felt like a glimmer of possibility that the person behind the persona -- now an underdog, which could be liberating -- might come through.

Clinton had plenty to cry about Monday. Polls showed Obama surging ahead in New Hampshire, and national polls -- always fairly meaningless, but meaning a little more now -- show her national lead eroding, too. Assuming Obama wins New Hampshire -- and I didn't talk to a single Clinton supporter today who challenged that assumption -- he'll likely win South Carolina too. Based on little more than Drudge Report headlines, talking heads on cable were asking much of Tuesday whether she might drop out of the race after a big New Hampshire loss.

Of course there's almost no chance of Clinton doing anything but run hard until Feb. 6, after so-called Tsunami Tuesday, when big states like New York, New Jersey and California, where Clinton still has strong leads, hold their primaries. Clinton supporters and even neutral observers will tell you the game changes there. But a big win for Obama in New Hampshire Thursday could be a different kind of tsunami, sweeping up potential and even committed Clinton supporters in a nationwide wave of enthusiasm for Obama's inspiring-if-vague politics of change.

Nothing made the Clinton supporters I talked to today madder than the notion that their candidate had faked her tears. "She's completely exhausted. I cried today, too," said one loyal volunteer (who didn't want to be named) when Obama supporters showed up on a Manchester street corner the Clinton camp has owned for the last week, waving signs and shouting them down.

But most insisted Clinton could prevail, even with a New Hampshire setback, citing her experience in the Senate, in the White House, and even, off the record, referencing impeachment and the Lewinsky scandal. "I've been waiting for this since the 2000 election," said die-hard Clinton supporter Billy Roderick, a mental health clinician from Derry. "Now is not the time" to take a chance on a newcomer like Obama, though he admitted: "There's a real possibility that he'll ride a wave here to other states." But he added: "That's not what I think will happen. She's solid and strong, she can still do it."