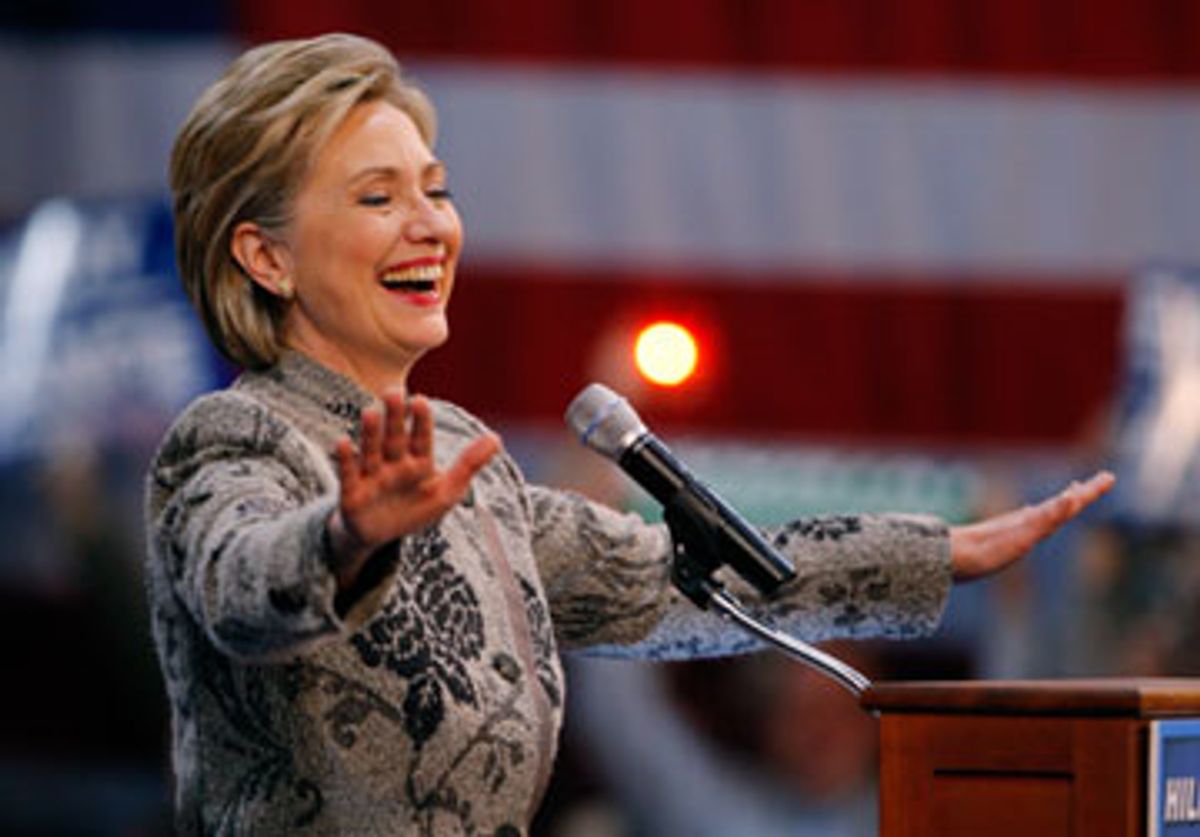 CONCORD, N.H. -- After her stunning upset victory over Barack Obama Tuesday night, Hillary Clinton gave the speech I thought she needed to give Monday. It was worth waiting for. "Over the last week, I listened to you, and in the process, I found my voice," she told a room of shocked supporters, looking a remarkable combination of exhausted, happy and humble. (Not humbled. There's a difference.) "Let's give America the kind of comeback New Hampshire has given me." There was a lot more "us," and "we," and "you" than "I." Even a line she's used before had new resonance, delivered in a slightly subdued, grateful tone. "Too many of you have been invisible for too long. Well, you have not been invisible to me."

The makings of Clinton's comeback in New Hampshire were invisible to everyone, including me. In the last three days of reporting, I didn't talk to a single Clinton supporter, on or off the record, who believed she would win New Hampshire. The question was how large Obama's margin would be, and whether the wave that swept him to victory in Iowa would carry him not just through this state but even into Super Tuesday. Nobody knows why the polls and pundits were so wrong. There will be plenty to analyze for days, but here are a few things to think about.

There's no doubt she owes her victory to a large turnout by and enormous support from women. NBC exit polls showed 57 percent of Democrats who voted tonight were women, and while Obama won among female voters in Iowa, in New Hampshire they favored Clinton 46 to 34 percent. Historians will wind up debating the impact of her iconic teary moment Monday morning, but it's impossible not to think the female support had a lot to do with the pile-on she has suffered lately: having to answer questions about her supposed lack of "likability" in the debate Saturday night, John Edwards joining Obama to attack her there, the daily drubbing by the media, and yes, maybe even the tears.

But it would be a mistake to interpret Clinton's win as a victory for her campaign's status quo, and its lamentable decision last year to run her as the experienced "incumbent" ready for a Clinton restoration. Most people chart the beginning of Clinton's slide to the Oct. 30 Democratic debate in Philadelphia, where she flip-flopped on the issue of drivers' licenses for illegal immigrants, but I go back a month earlier, to the Dartmouth debate Sept. 26, when the media was denouncing Barack Obama for his lackluster campaign and pronouncing her virtually unbeatable. On her way to the debate, she cast a vote to declare Iran's Revolutionary Guard a terrorist organization. I criticized it at the time. I didn't only disagree with its hawkishness; it was an eyes-off-the-prize moment, in which she looked past the primary to the general election and tried to fend off GOP slurs of being soft on terror. But it undid a lot of work she'd done making up for her vote to authorize the use of military force in Iraq -- and it looked arrogant, as if she'd already won the primary.

She has to avoid future arrogant moments. She has to try to make the case for change without attacking Obama, especially unfairly. Some of the charges her campaign raised against Obama just this week -- that he voted for the Patriot Act after opposing it and that he has backed every war-funding bill -- have been hollow, since Clinton herself supported the Patriot Act and every war-funding bill Obama did. She also has to figure out the best way to use her husband. He's the best politician of his generation, but he has been a drag on the campaign at times -- first with his debatable claim that he had always opposed the Iraq war, and most recently Monday when, clearly overtired, he said, "We can't be a new story. I'm sorry. There's nothing we can do. I can't make her younger, taller, male." But while pundits found Clinton's angry Tuesday statement that the notion that Obama would bring change was a "fairy tale," it might have worked with late-deciding voters. Still, she needs to step out on her own, and she needs to make both a personal and a political case for herself.

There's still a long campaign ahead, and despite her win Tuesday night, she should remember Iowa. Being the underdog suits her. Clinton's resurgence in the last two days had a lot to do with her sudden accessibility, spontaneity and, yes, even vulnerability. Taking questions from audiences and reporters. Admitting in the Saturday debate that being considered not likable "hurts my feelings." And yes, even the tears.

But I'm also wary of overemphasizing the tea-and-sympathy vote in Clinton's win. NBC exit polls also found that Democratic voters said she was the candidate most ready to be commander in chief. But while Tim Russert mentioned that on "NBC Nightly News" before the polls closed, nobody said a word about it on MSNBC as word of Clinton's victory came in; it was all about a backlash by women saving Hillary. "The women of New Hampshire gave this election to Hillary Clinton," Russert said after she was declared the winner, while Chuck Todd declared there could be a "gender war" in the Democratic Party. (Chris Matthews, meanwhile, looked more dismayed than Michelle Obama when the results first came in.)

There will be no gender war in the Democratic Party. But I also have to take in that every place I went in Iowa and New Hampshire, Clinton got her biggest hand when she or supporters emphasized the historic nature of her run as the first credible female presidential candidate. And every place I went since her Iowa loss, I've talked to women -- even many who didn't support Clinton -- who were dismayed that this "first" Clinton seemed on the verge of achieving was being swept aside as unimportant, that somehow only Obama symbolized change. It now looks like the Democrats will have a historic first whomever they nominate. We'll see how the campaign evolves from here, but it all got more interesting tonight. I'll be traveling tomorrow and probably not able to blog, but I'll try to check in via comments. Thanks for reading this week.